Many felt his behaviour was unbecoming of the CEO of SPH.

After a single outburst in a media conference, the word ‘umbrage’ has taken social media by storm.

Over the last few days, countless memes and comments from people have surfaced as many endeavour to master the usage of a new cheem word.

If you’re unaware, Singapore Press Holdings (SPH) CEO Ng Yat Chung declared that he took umbrage at a journalist’s question about editorial integrity on 6 May.

Probably taking umbrage at the fact that he took umbrage, someone started a petition demanding his dismissal as CEO of SPH.

A day after SPH held a press conference to announce the company’s restructuring to a non-profit business model, a Change.org petition emerged. 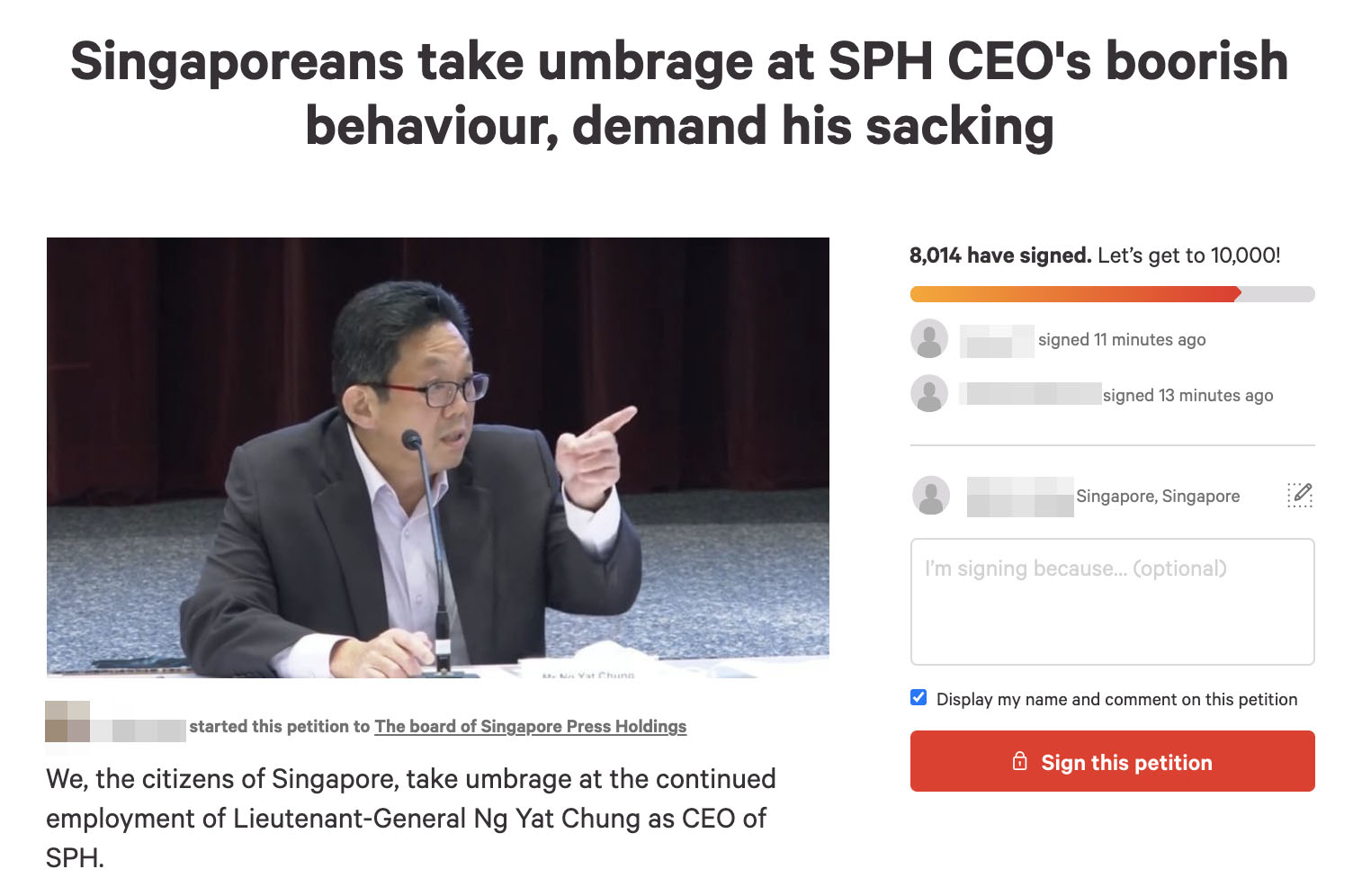 The petition calls out Mr Ng’s behaviour of going “on a rant” and pointing fingers at the reporter during the press conference. In doing so, he also evaded the reporter’s questions.

It also stresses that such behaviour is unbecoming of a CEO who presides over the publishing operations of Singapore’s dailies.

Due to this, the petition states that Mr Ng should not continue to helm SPH, demanding his dismissal.

Over 8,000 have signed the petition

At the time of writing, over 8,000 people have signed the petition.

Many petition supporters agreed that his outburst was inappropriate for someone in a leadership position at SPH.

One supporter elaborated that one helming “an institutional Goliath should lift up and not talk down to people” in such a manner. He believed that Mr Ng could have handled the situation better without appearing “rude and condescending”.

Others expressed that they were signing the petition out of concern for the future and working environment of SPH.

Ng has apologised for causing offence

After 2 whole days of having the controversy simmer and brew, Mr Ng issued an apology, published in The Straits Times.

His apology was placed inconspicuously at the end of a related news article, but it did not escape the eyes of other media practitioners, including MS News.

SPH CEO Apologises For Offence Over ‘Umbrage’ Outburst, Will Continue To Stand Up For SPH Media

They took the opportunity to shine the spotlight on Mr Ng’s statement, where he apologised for causing offence over his outburst:

“I had stood up for SPH Media’s long-cherished editorial integrity and will continue to do so. Being a direct and blunt-speaking person, I apologise for any offence I might have caused and regret any distraction from the merits of the proposed restructuring.”

‘Umbrage’ saga is a leadership lesson for many

And once the words are said, it is hard to take them back.

Hopefully, this saga will have provided a lesson on how a leader should conduct themselves, be it in closed doors or in public.