His Wikipedia page has since been updated.

Wikipedia is known for its encyclopedic coverage of anything and everything. That is due in part to being open-source for anyone to edit and write entries.

But with that level of freedom, it also becomes a perfect setting for some mischief.

Hours after SPH CEO Ng Yat Chung took umbrage at questions directed to him during a press conference, his Wikipedia page was updated with his newly coined nickname. 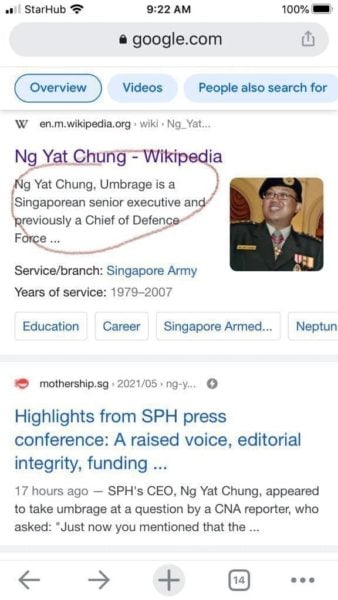 Mr Ng’s charged response to a journalist’s question on 6 May shot the word ‘umbrage’ to the top of Google Singapore search trends.

An anonymous opportunist took this chance to update Ng Yat Chung’s Wikipedia page and made the relationship between 2021’s hottest word and the SPH CEO ‘official’.

However, his page has recently undergone another update, with the nickname now gone.

Fortunately, nothing truly disappears from the Internet. An MS News reader managed to capture screenshots before the post reverted to the original.

Before the update, a search for ‘Ng Yat Chung’ on Google would fetch you his Wikipedia page, which would’ve immediately shown his new nickname. 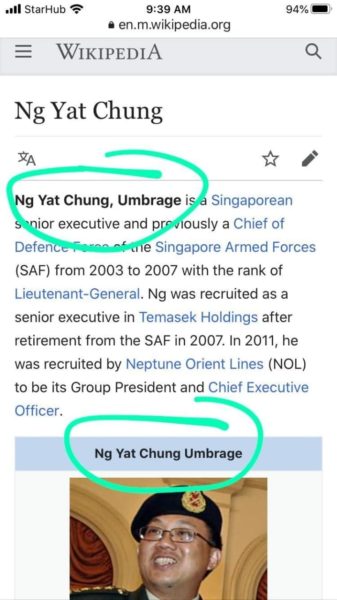 Bolded in all its glory, the word ‘umbrage’ sits proudly after his name on the first line of the Wiki entry.

Whoever edited the page seemed to have a field day, as they decorated Mr Ng’s profile with 1 more special accolade. 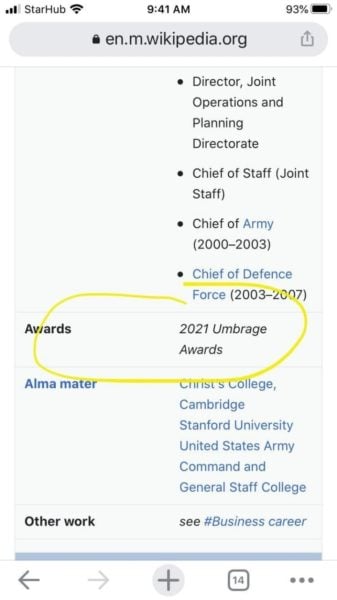 Now, besides his impressive CV and alma maters, he’s also the lone winner of the ‘2021 Umbrage Awards’.

Singapore Internet as savage as ever

Aside from his impressive vocabulary, Mr Ng’s general conduct at the press conference came as a shock to many.

But let’s not be too quick to dismiss him. After all, he introduced a new word for a lot of Singaporeans to add to our vocabulary.

If you ever have the opportunity to meet the man himself, we’d suggest erring on the safe side and avoid calling him by his new nickname.