For the past 55 years, Mr Foo Kee See, 78, has been a perennial figure in Serangoon Gardens and the Seletar Hills Estate, delivering bread, provisions and warm smiles to residents. He is affectionately referred to as “Uncle Bread” – truly an “everyday hero”.

However, from Wednesday (Jan 11), he will be seen no longer in the area, as he’s calling it a day, according to a Straits Times‘ article – and bread company Gardenia decided to thank him for his unwavering support.

After hearing of Mr Foo’s impending departure, Gardenia decided to drop by Mr Foo’s place with a gift basket! The company also wished him good health and a happy retirement on their Facebook page. Well played, Gardenia! 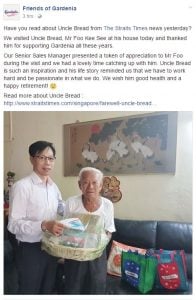 The residents he served took Mr Foo to their hearts due to his diligence, and for catering to special requests such as buying a specific kind of bread and making a detour from his usual work route for a delivery. 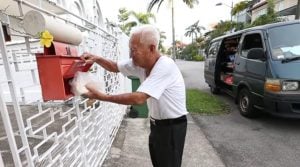 Mr Foo has a systematic way of recording his customers’ bills, allowing his regular customers to pay at the end of the month. 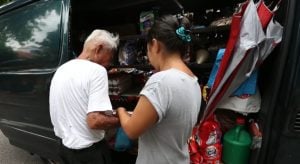 His creativity also means he can think of ways to make his job easier.

Don’t need bread for that particular day? Just tie a yellow plastic bag at your gate, and Mr Foo will know!

After receiving news of Uncle Bread’s impending retirement, many have taken to social media to express their gratitude and reminisce about the past. Here are some of the best:

1. For some, he was an uncle that they grew up with

2. Others braved the forces of nature just to buy from him

They posted on Reddit the lengths they went to just to buy from him.

3. Former residents still love him as much as ever

Even though they have moved out of the area, they posted on Reddit that they want to come back just to say goodbye.

4. Youngsters can learn a thing or two about Uncle Bread’s work ethics

5. There’s also a timely reminder to cherish those around us

We would like to commend Uncle Bread on his hard work and dedication, and wish him all the best for his retirement.