Mobile crane crashed into a POSB branch this morning

At 7 a.m. Wednesday morning (24 Feb), a mobile crane crashed into a POSB branch in Woodlands.

The police said that as the 36-year-old driver was trying to make a turn, the crane slipped, keeled over and collided into the POSB branch at 2A Woodlands Centre Road, according to Channel NewsAsia.

Here is the aftermath of the accident:

This morning (25 Feb) at about 3 a.m., the fallen crane was removed from the POSB branch.

Rescue cranes came to the rescue

At around midnight, the roads were out of bounds for usage to make enough space for two rescue cranes maneuver their way in.

It took the two rescue cranes only a few minutes to remove the crane stuck in the POSB branch. 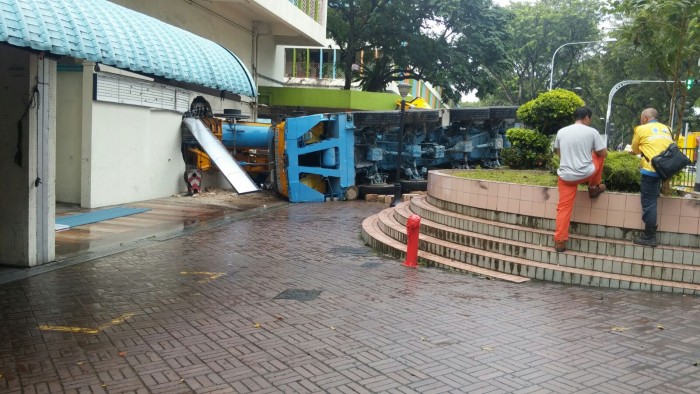 The accident happened at 7 a.m. on Wednesday morning but as at 6:44 p.m. on the same day, the crane was still stuck.

However, throughout the day, Channel NewsAsia reported that the building owner has made arrangements with professional engineers to head down to the premises to inspect the building.

This accident did not have any devastating consequences

No one was hurt when this accident took place, although the driver was trembling as he got out of the vehicle with the help of 2 witnesses.

A DBS spokesperson told The Straits Times that “the driver lost control of his vehicle while making a turn”. He was also unhurt.

One motorcycle however, did not manage to survive the disaster.

The Straits Times reported the woes of a Malaysian motorsyclist whose motorcycle was flattened as the crane came crashing down.

He said “There were other motorcycles parked there too but only mine was dragged under the crane when it fell. It’s completely flattened now and I probably can’t get it back. I don’t think I can have it repaired too,”

We pray that he has bought insurance for his motorcycle.