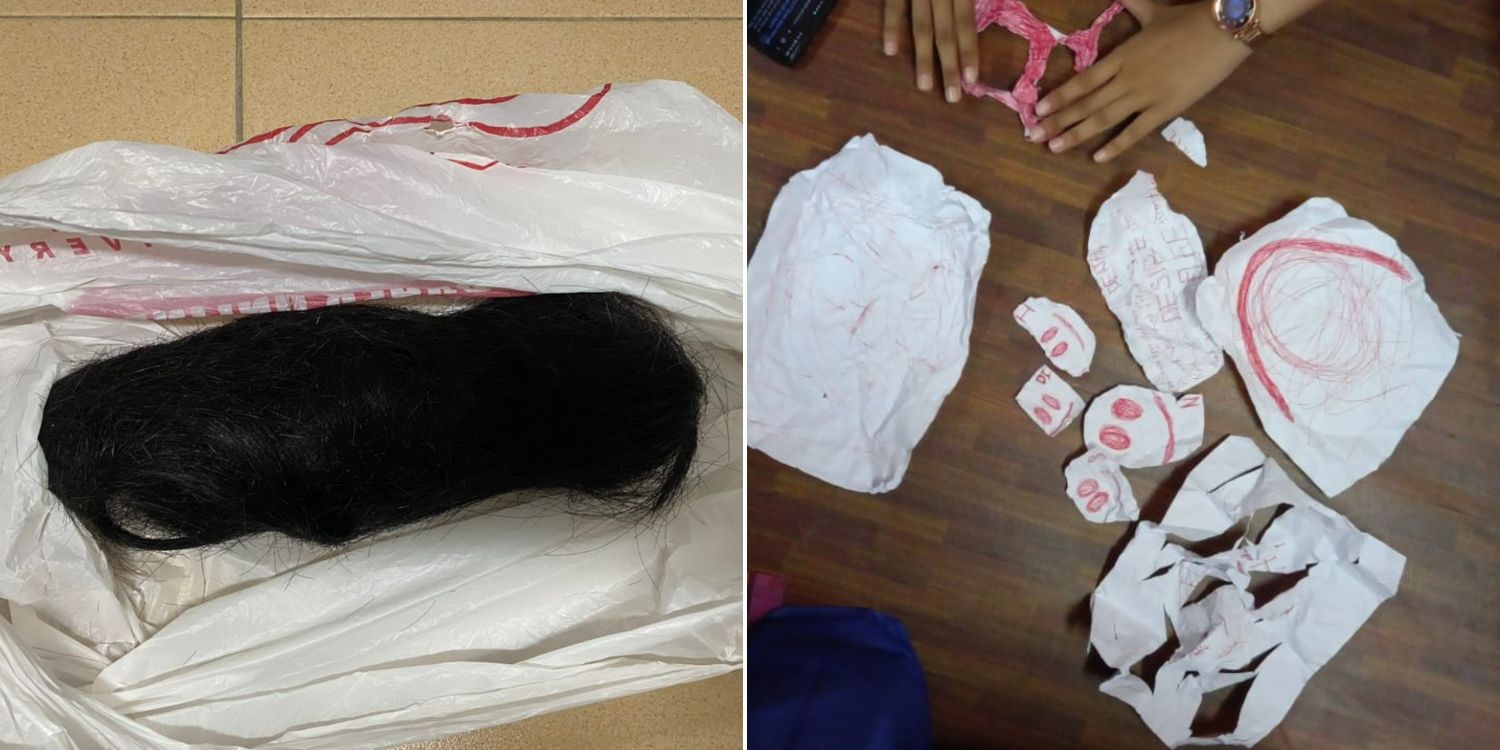 Being away from family at a young age is already tough. Throw bullies into the mix and it becomes a living nightmare, which a student at a boarding school in Kuantan, Malaysia, seemed to have experienced.

Her mother’s extensive recount of her ordeals went viral on Facebook yesterday (12 Aug).

Detailing how bullies had cut her daughter’s uniform and even hair while she was asleep, Facebook user Madam Nazrah claimed that the authorities failed to take action despite multiple reports.

The police have since responded to the viral post, assuring the public that they’re investigating the matter.

In a lengthy Facebook post on Friday (12 Aug), Madam Nazrah shared that a case of “treachery and gangsterism” against her daughter had been ongoing at a boarding school in Kuantan since June 2022, without any resolution.

Recalling specific dates in chronological order, she listed all the horrifying acts that other students had allegedly carried out.

On 17 and 19 Jun, for instance, her child’s blue and yellow uniforms were found with cuts and scribbles on them. 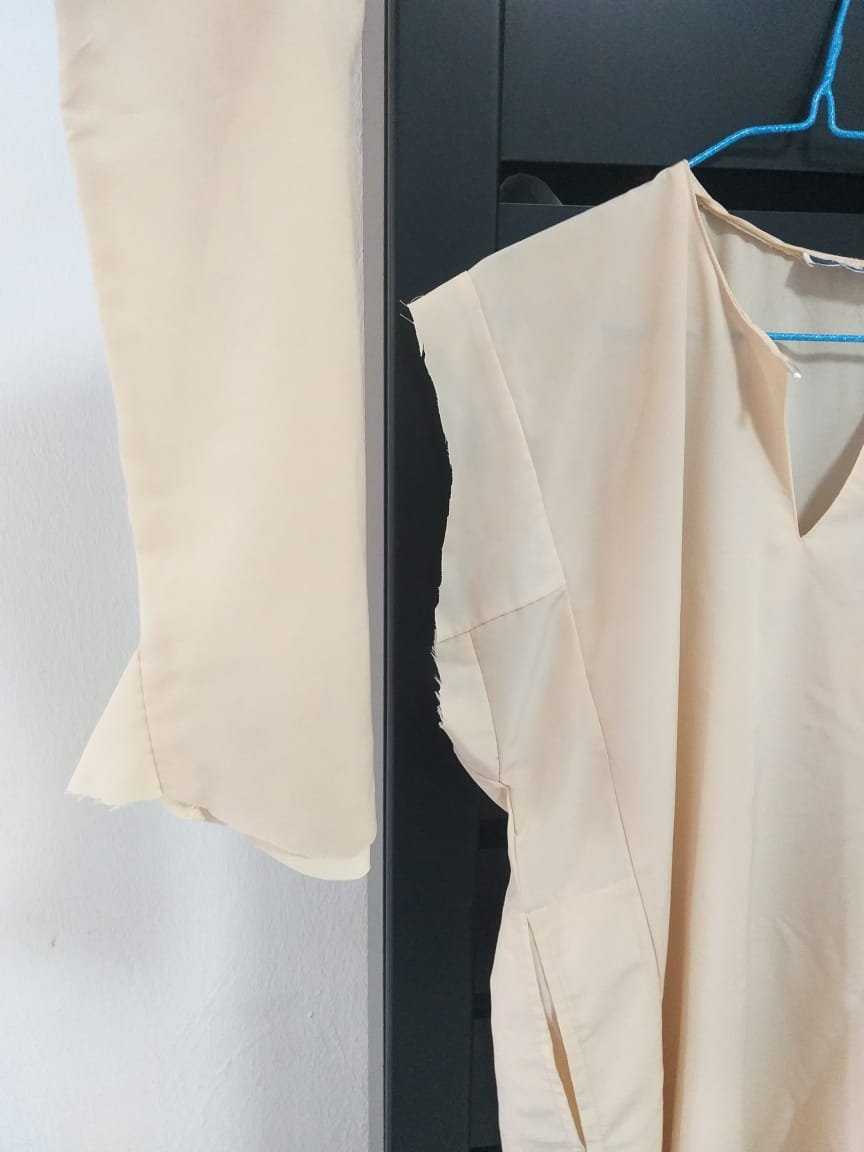 Senior students tried investigating the matter themselves but failed to identify the culprit. After receiving a call from her daughter, Madam Nazrah contacted the school warden who apparently had no clue about the incident.

Over a week passed without any word on the culprit until trouble struck again on 26 Jun. This time, her daughter found drawings on separate occasions within the same day: 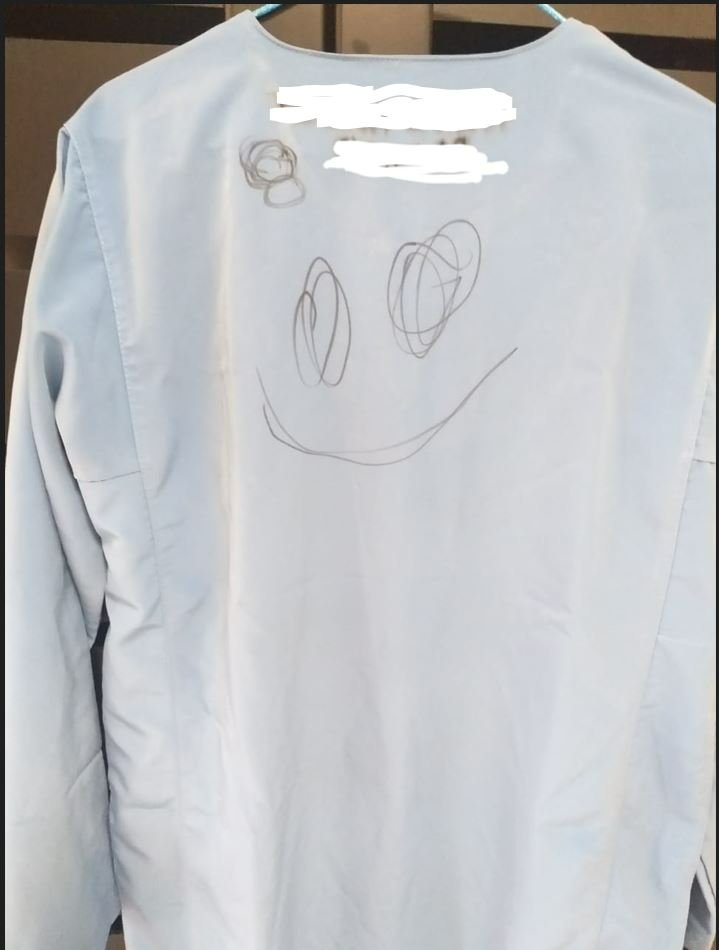 She promptly informed a senior student, who wasted no time in alerting the warden.

That night, Madam Nazrah claimed that five wardens called her daughter and forced her to admit that she had committed all the deeds herself.

Alleging that they didn’t even take down the young girl’s statement, she accused the school of pinning the blame on her daughter after failing to find the culprit.

The following month, Madam Nazrah called the deputy chairperson of the school’s student development council to ask about the developments of the case.

Instead, she received information that they had referred her daughter to the school counsellor, who found that the child was suffering from anxiety and high stress levels.

Madam Nazrah later decided to bring her child home and meet a children’s psychiatrist for a proper assessment.

Thereafter, she claimed that the doctor found her child to be free of any signs of anxiety, depression or stress. The young girl’s account of her experiences to the doctors was also consistent with everything she had told her mother.

On 22 Jul, Madam Nazrah met with school officials who allegedly admitted that they had failed to conduct investigations properly and wrongfully blamed her daughter.

She filed a police report against the school that same night, along with a complaint to the education ministry.

While she didn’t mention what transpired after, more cases began to crop up in early August.

On 7 and 8 Aug, students allegedly found five t-shirts and five pieces of uniform belonging to her daughter and several other peers visibly cut. They informed a warden who wrote their statements.

Madam Nazrah brought the matter up to the police, who then advised the school to bring her 14-year-old daughter to the station to give a statement.

That same night, she received word from another parent that their child had found a threatening note in her room. The message was allegedly for her daughter. 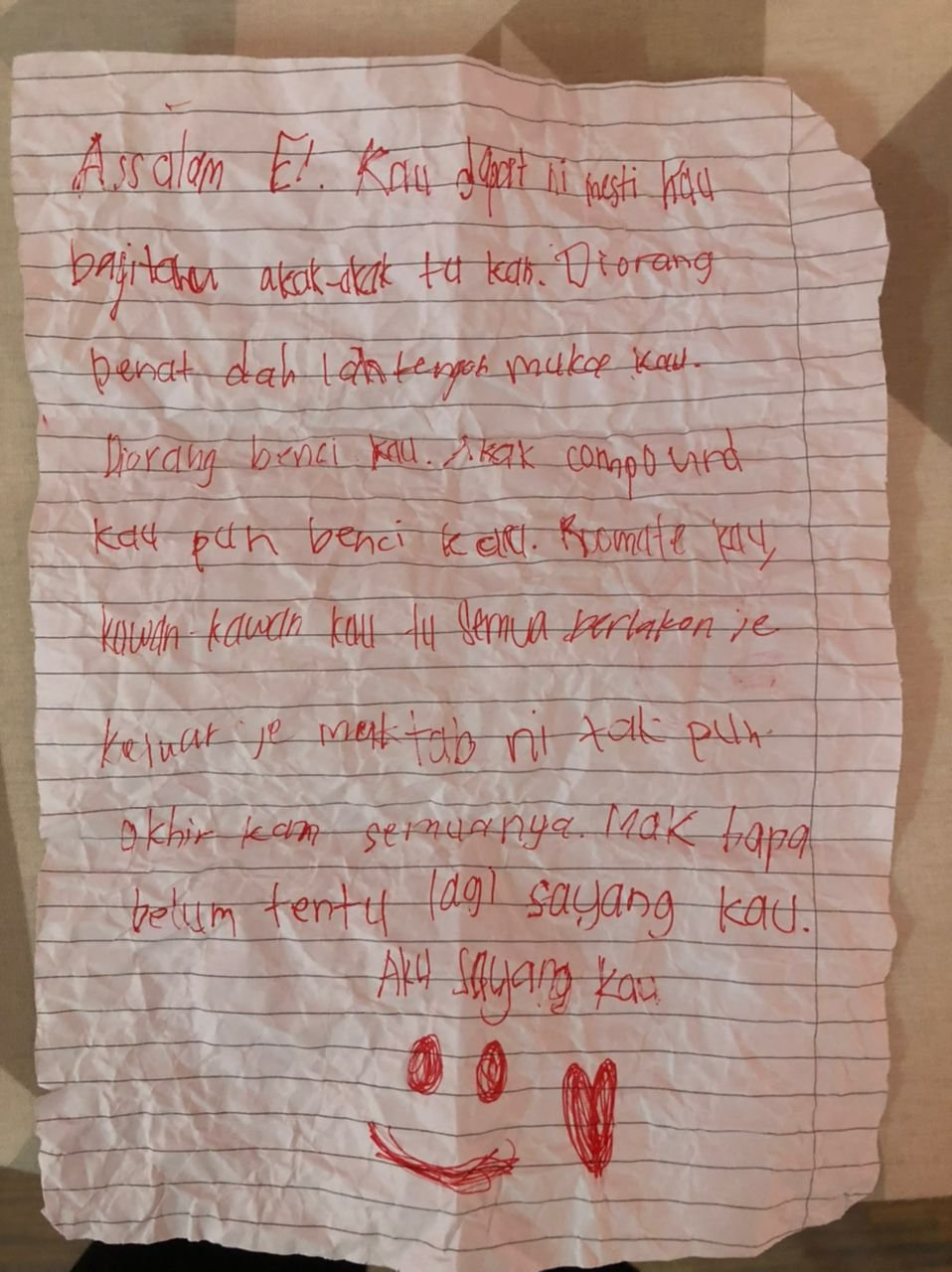 The note, written in Malay and in red ink, reads:

Hi El, when you get this, you’ll surely tell the senior students, right? They’re tired of looking at your face. They hate you. The lady at the compound also hates you. Your roommates, your friends, are all just acting. You should just leave this school or end everything. Your parents may not even love you. I love you.

Despite the smiley face and heart at the end, the eeriness of the message was indisputable.

Again, Madam Nazrah referred the case to the Investigating Officer (IO), who urged the school to file a police report.

Since her daughter had been away for a while, she sent the teen back to school the following day, on 11 Aug, to attend lessons as normal.

Unfortunately, the day after, the teenager called her mother early in the morning, claiming that someone had cut her and two of her roommates’ hair short while they were asleep at night. 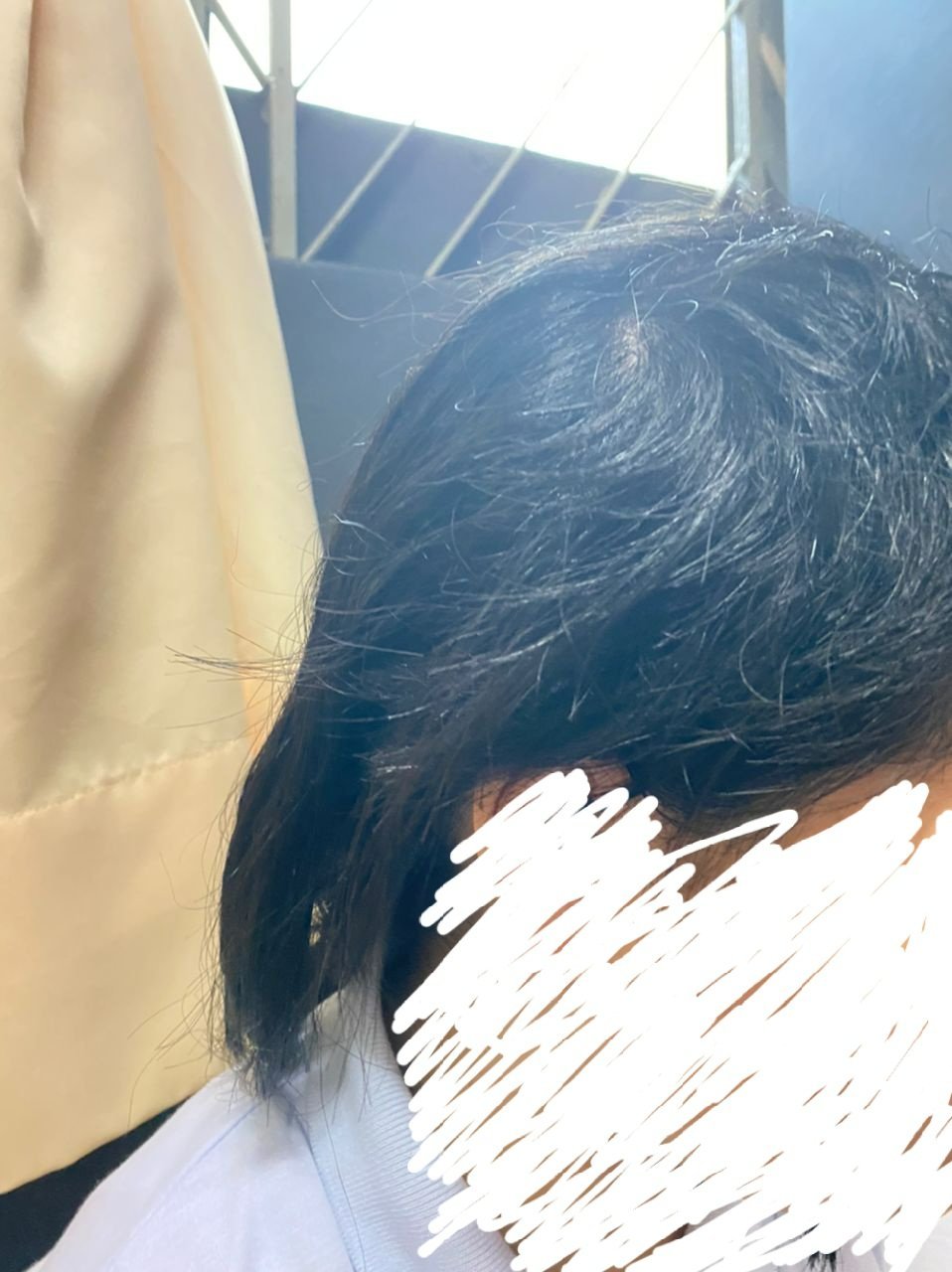 They had informed a senior student and warden, while Madam Nazrah notified the police.

At the point of writing her post on 12 Aug, the mother claimed that no action had been taken.

In a report today (13 Aug), Kosmo! states that police have confirmed that they’ve received two complaints regarding the cases at the school.

They revealed that they’re currently investigating the case of abuse and treachery and will announce more details soon as it requires thorough examination.

If you or anyone you know needs emotional support, do not hesitate to reach out for help. You can contact Samaritans of Singapore via their hotline 1-767.