All aboard! Attention all ardent fans of Cartoon Network (CN) shows like We Bare Bears, Adventure Time and Powerpuff Girls.

You’ll soon be able to board the world’s first themed CN cruise alongside your favourite characters for just S$200 a night.

Cartoon Network Wave’s maiden voyage is set to depart from Singapore in late 2018, according to their official website.

Without further ado, here’s a sneak peek from their whimsical teaser video.

Calm down, everyone. Breathe.

Now let’s take a quick look at what else is in store for all you adventurous cruise-goers.

The cruise is estimated to have 11 decks, 800 fully themed cabins and suites, for a total capacity of 2,000 fans.

Her maiden voyage begins by a grand departure from Singapore Cruise Centre in late 2018.

Cartoon Network Wave will then hit the shores of 13 other popular destinations in the Asia Pacific region.

Some of which include Malaysia, Thailand, China, Taiwan, South Korea, Australia and Japan.

Starting from S$200 a night, it won’t be an impossible dream to glimpse the full majesty of this Jake-embossed ship in person.

Omniverse, Townsville and The Bears’ Den

Seasoned cruise riders will know that a cruise is not just for relaxing on the sundeck, as the wind rushes through your hair.

Here are some possible adventures that await long-time fans of Cartoon Network’s most brilliant shows.

We don’t know the menu, but we’re guessing it’s gonna be bravo.

Rest and relax by the rooftop Toonix pool in the Play & Learn Hub.

We’d imagine this child-friendly pool will definitely be fun edutainment for the young ones, just like CN shows.

Toadstools and clouds look familiar? Don’t forget to hit them for an additional life or to grow bigger!

The Adventure Time rope park and obstacle course will surely get children’s adrenaline rushing through their veins.

Imagine standing atop of those swinging logs in the middle of the ocean. Sweet view.

Slide down the rainbow slide in victory afterwards.

We’re crossing our fingers that adults can go on the slide too.

Rain or shine, there will never be a time for you to feel bored.

The Power Cage, an eye-opening, jaw-dropping circus show will surely leave you questioning how they pulled off such amazing stunts.

We are guessing the character mascots would be making their way about the cruise for pictures.

Family activity idea: Try to snap a selfie with all the Cartoon Network personalities as if it’s a treasure hunt.

There’s going to be a shopping belt too

You’re on a Cartoon Network themed cruise. There’s really no reason to hold back.

Here are some hot items you might get a chance to lay your hands on!

Who can say no to a giant We Bare Bears body pillow?

Limited edition Adventure Time lego characters. We would be so thrilled.

Caps, netbooks and phone cases for the more practical fans out there.

Don’t forget to bring your credit card and stamina.

Plush bedding fit for a king.

You’re on a cruise. Treat yourself and your family right.

Wet weather? Don’t fret. Even if you’re too comfortable to get out of bed, there’s an exciting games room within the suite, fully equipped with a fooseball table and indoor slide.

We just want to curl up into a ball on that cosy window bed and look out into the beautiful horizon.

With ample space for bonding games, you can even try sleeping in different spots of the suite every night.

Sadly, we aren’t too sure about this — yet.

Further details on the cruise schedule are set to be announced at a later date.

Of course, we at MustShareNews will be keeping our eyes peeled for any updates.

So while we patiently wait to board this magical cruise into the land of cartoons, here’s an adorable video of We Bare Bears to pass the time.

All pictures are artist impressions of the actual cruise ship. 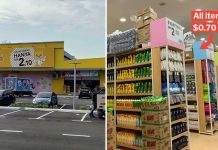 Ninso Is M’sia’s Daiso But With Everything At $0.70 & It Just Opened Near Tuas Checkpoint 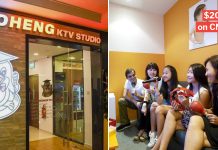 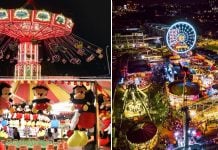