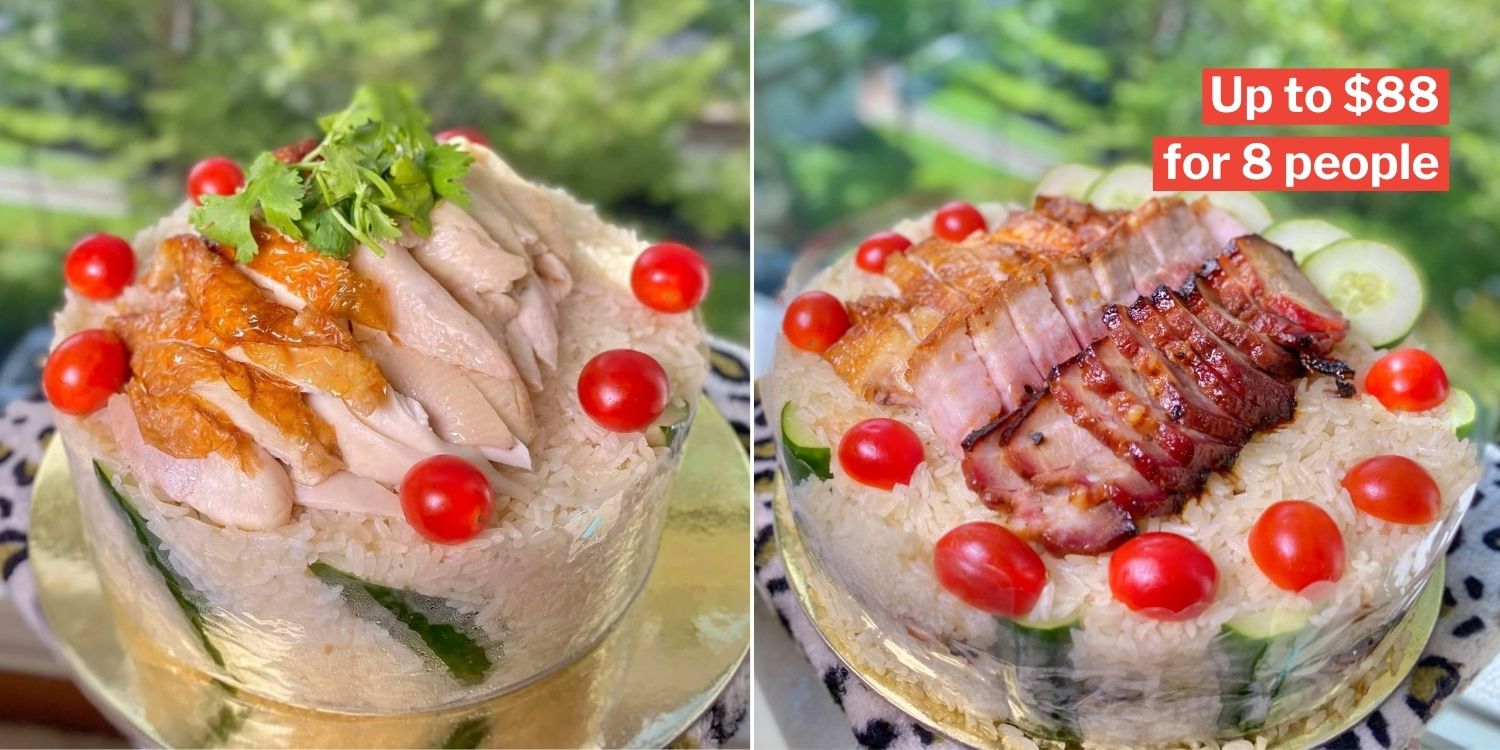 The dish is so beloved by many that we all know that friend or colleague who just eats chicken rice for lunch by default.

There’s now the prefect “cake” for when someone like that celebrates a birthday — a chicken rice cake. 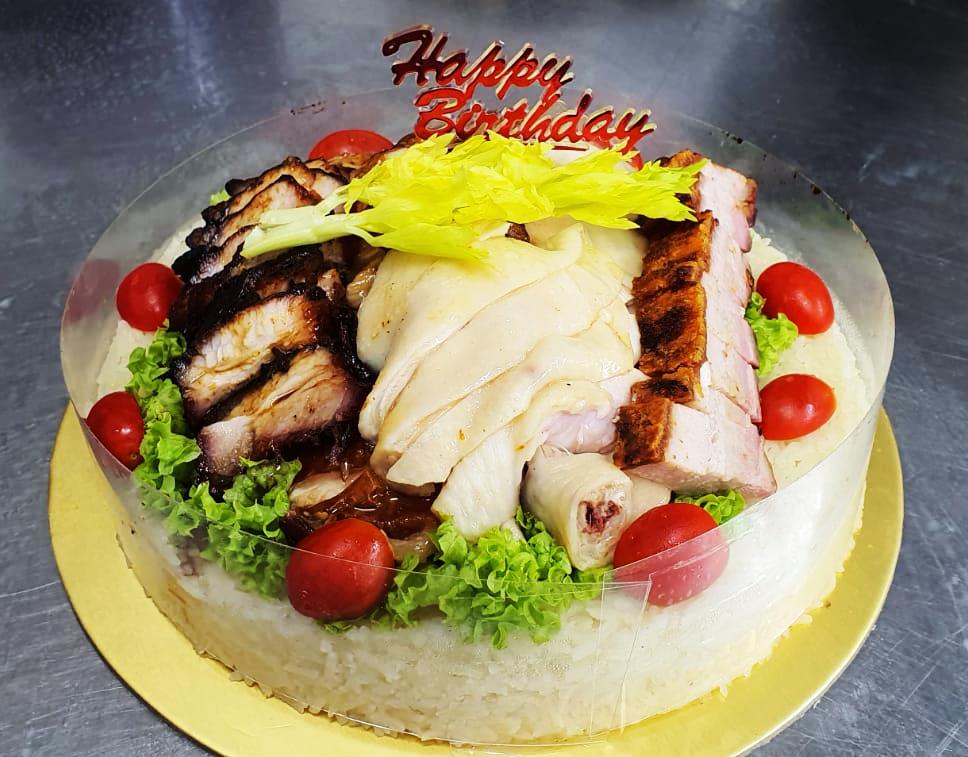 It’s now being offered by one local hawker for pre-order only.

Get it from famous chicken rice hawker

You know those stalls with photos of celebrities and public figures in front? Yup, it’s one of those. 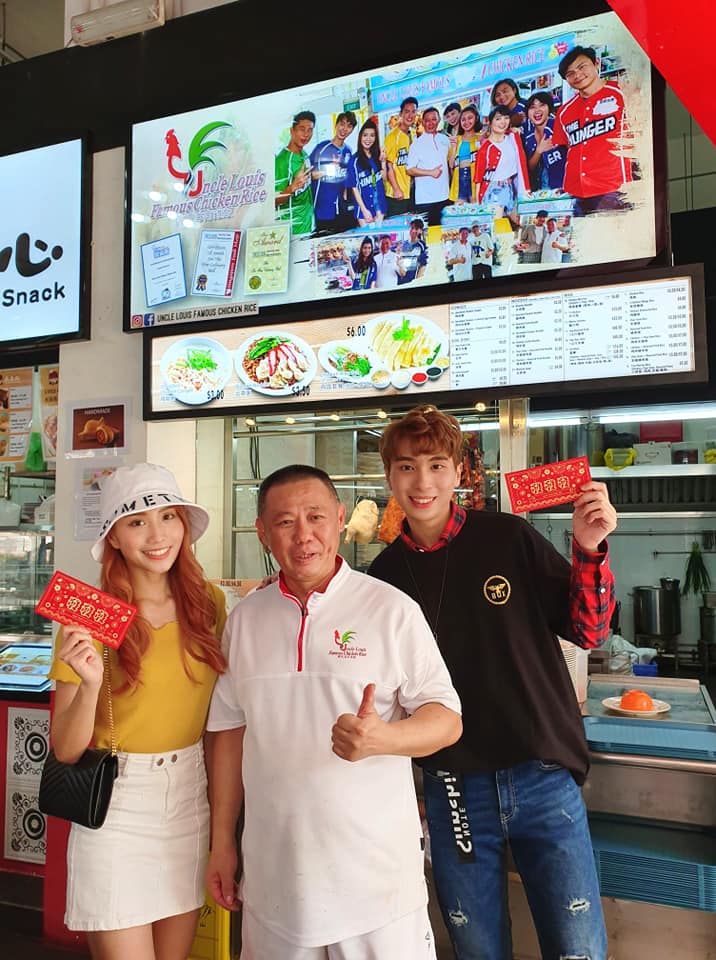 According to 8 Days, Mr Tan was apparently a hawkerpreneur even before the term came into being.

He actually has a diploma in western cuisine from an Oxford college, and worked as a chef at the Hilton Hotel before quitting to become a hawker.

The idea for the chicken rice cake was born during the ‘Circuit Breaker’ period, when dessert shops selling cakes only weren’t allowed to open.

To satiate people’s craving for “cake” during this time, but at the same time not falling afoul of any laws, Mr Tan thus came up with the idea so people can still celebrate special occasions with a “cake”. 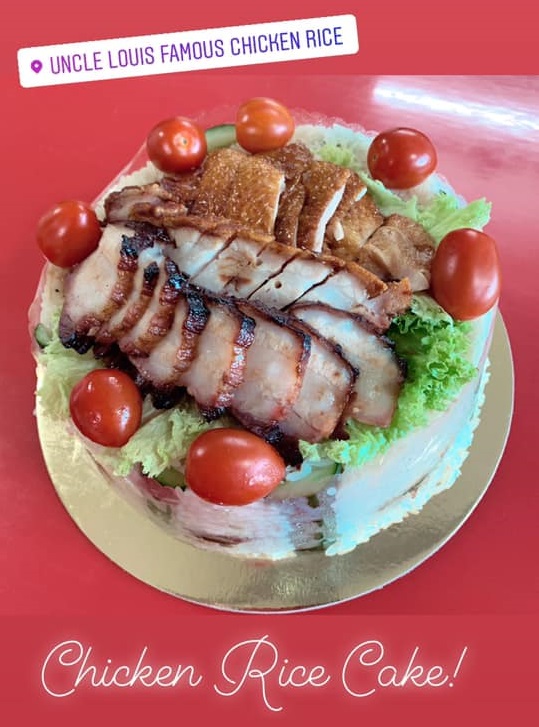 It proved popular enough that he made it a permanent item even after the ‘Circuit Breaker’ ended.

Cakes can be customised with all sorts of roast meats

We can see why his customers love it so much.

Firstly, there’s the steamed fragrant chicken rice as the base.

On top, instead of just chicken, Mr Tan can customise the cake with all sorts of roast meats that he offers at his stalls.

If you’re the type who can’t choose between white and roasted chicken, you can have both. 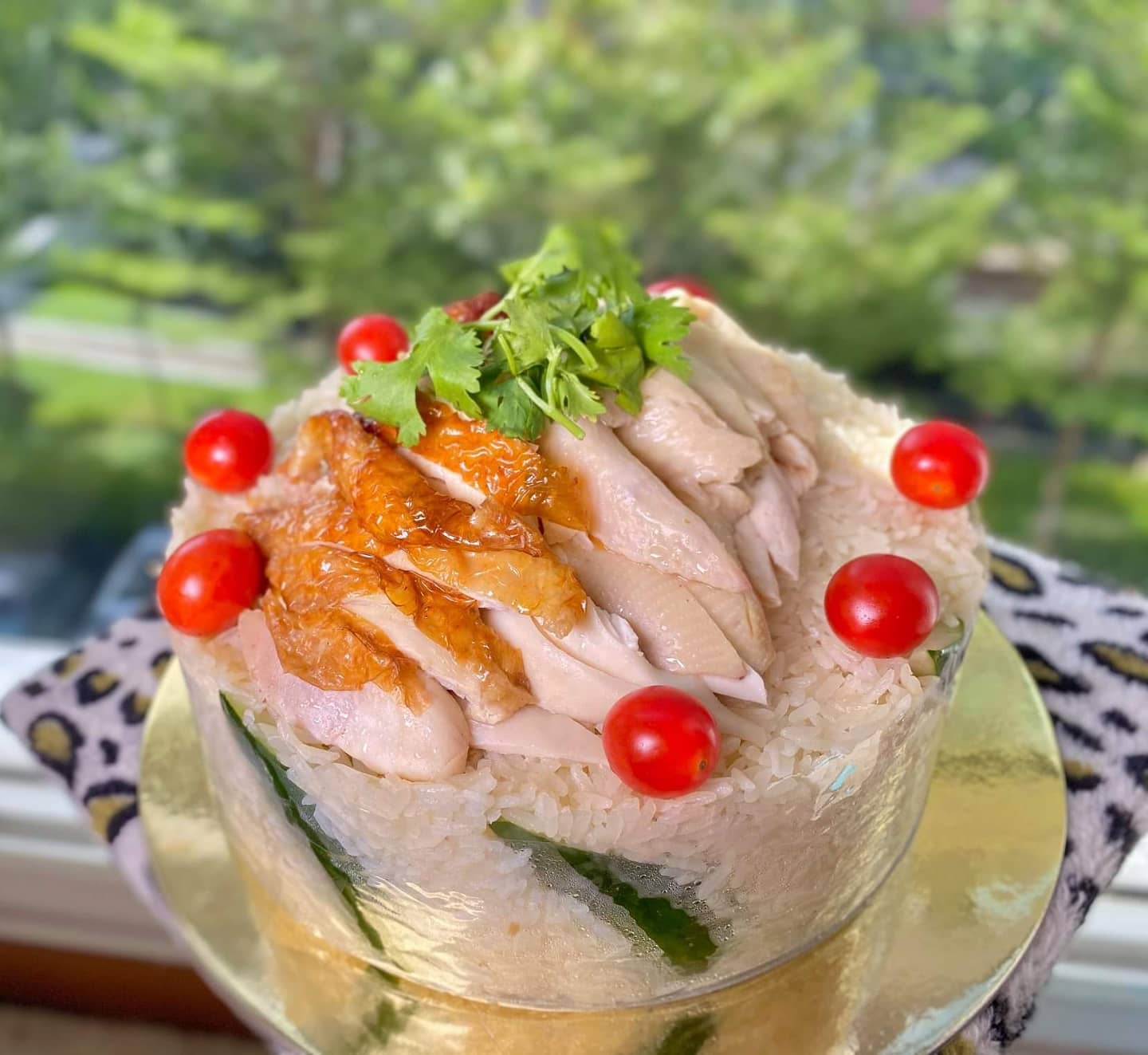 If you want a variety, you can get the trio of roast meats — chicken, roast pork, and char siew. 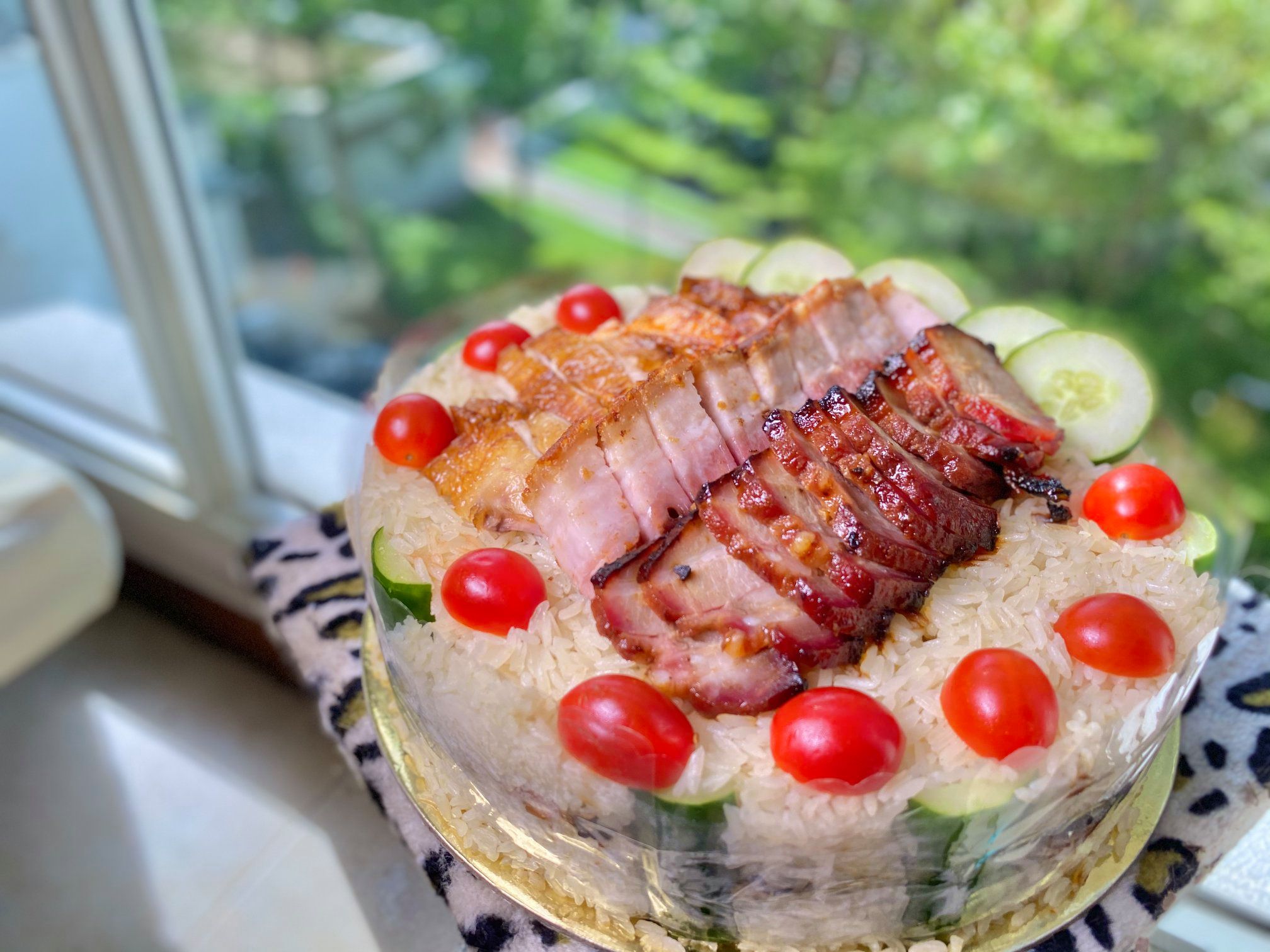 The cakes are also adorned with vegetables like cherry tomatoes and slices of cucumber, so you won’t forget to eat your greens.

However, if you visit his stalls, you won’t find the cakes on listed there.

They’re an off-menu item, he said, and you’ve got to pre-order if you want them.

They come in 3 sizes:

To order a chicken rice cake, call 9847 4988 at least 2 days in advance. Islandwide delivery is possible with a fee of $12 per location.

Of course, before all this, his stall was also known for its chicken rice and roast meats, served the normal way. 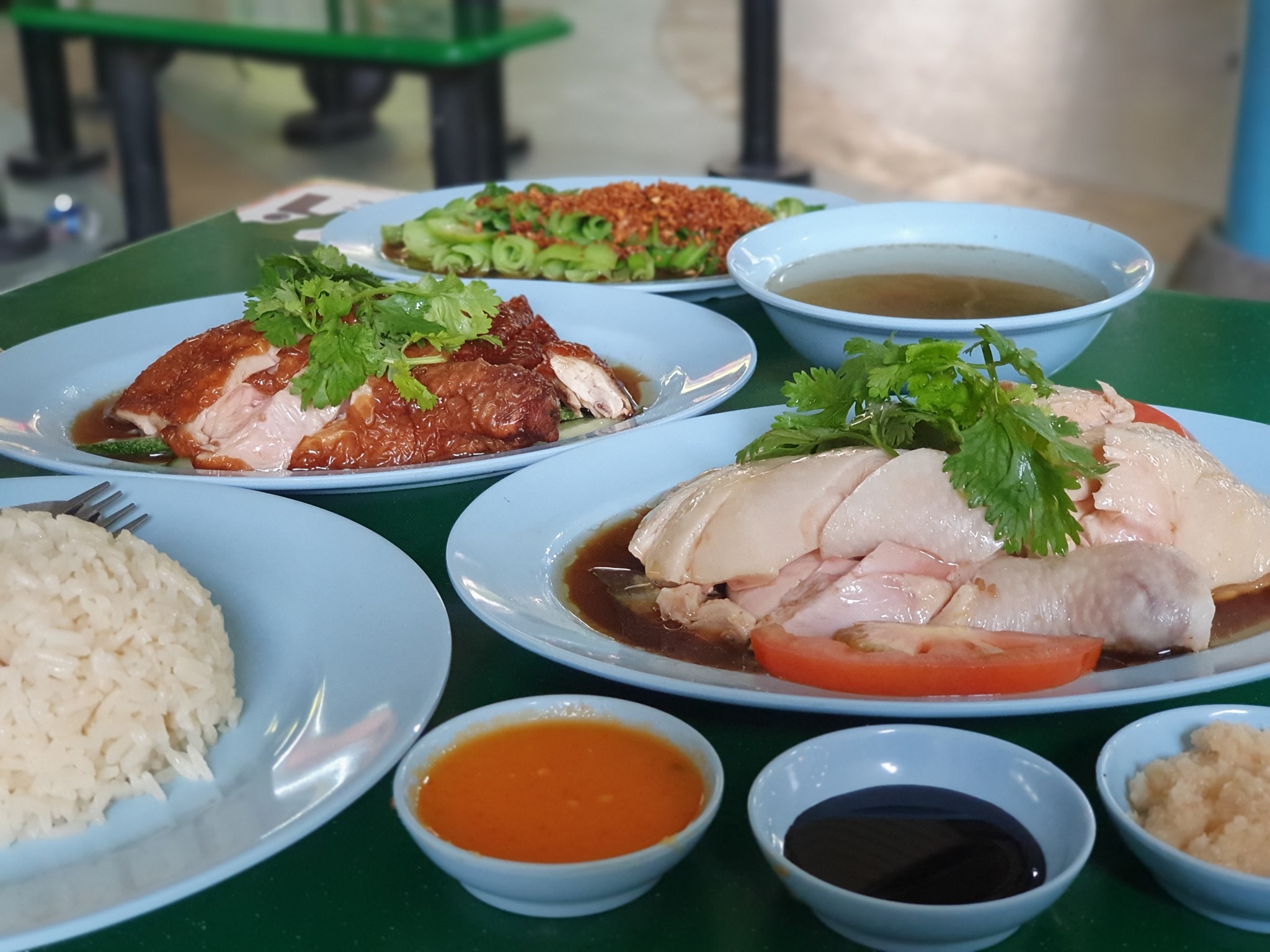 His stall’s so famous, even former Nee Soon MP Lee Bee Wah has popped down to try his fare. If you want to try his more traditional food, do visit his stalls at:

New spin on a local favourite

However, Mr Tan’s new spin on a local favourite succeeds because he keeps most of what’s good about it intact — it’s merely the shape that’s changed.

Thus, a chicken rice cake may just be the centrepiece for our next special occasion.