Must Share News – Independent News For Singaporeans
Home Viral Concrete Falling Incident Was Due To Wear & Tear, HDB To Start...

UPDATE (21 May, 12.30pm): The Housing Development Board (HDB) told MS News that they have been alerted to the incident and visited the flat on the same day (19 May). Repair works are set to begin on Friday (22 May).

You can read their statement below in full.

During the ‘Circuit Breaker’, parents are planning stay-home activities to keep their young ones active and entertained.

This mother was apparently having a ‘playdate’ with her young son when things took a frightening turn.

A chunk of her home’s restroom ceiling allegedly fell on her son and blood was seen on his back.

She shared the terrifying incident in a Facebook post on Tuesday (19 May) which garnered more than 2.2k shares in 3 hour. 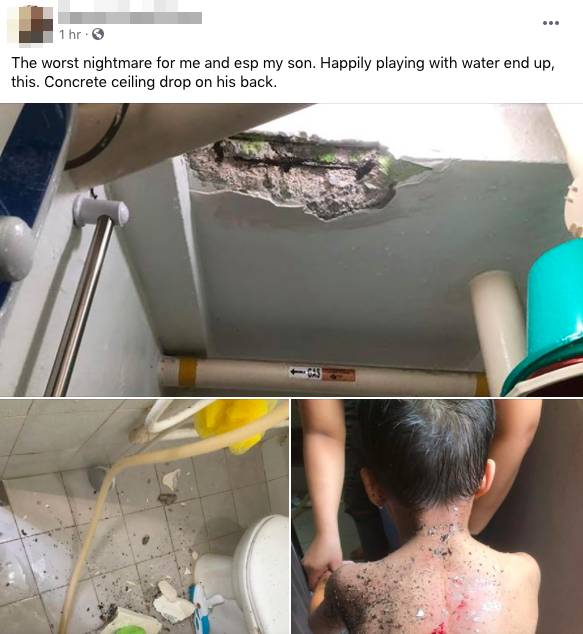 According to the post, the young boy was “happily playing with water” when the ceiling gave way. 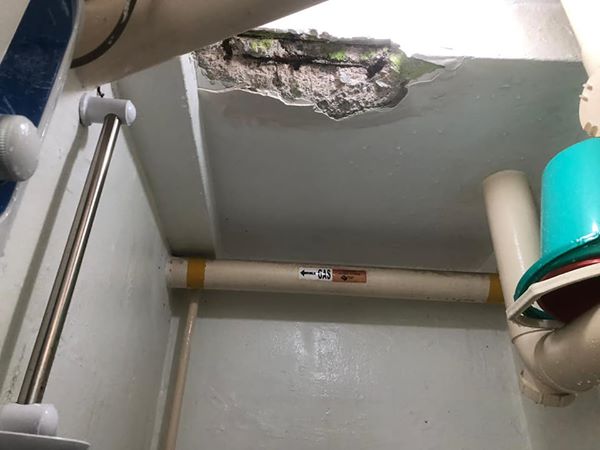 The incident reportedly happened at their home in the Henderson area, based on the mother’s comment.

A chunk of concrete apparently fell and landed on the boy’s back. Blood can be seen on the skin amid the debris. The mother also shared a picture of what appears to be remnants of the fallen concrete sprawled on the ground. She described the incident as their “worst nightmare“. According to this Facebook comment by the mother, the authorities have already been notified of the incident.

HDB investigated on the same day

MS News reached out to the Housing & Development Board (HDB) for a statement.

They reveal that officers made their way to the apartment on the same day of the incident (19 May) to investigate this case.

According to the spokesperson,

Spalling concrete occurs when steel bars embedded in the ceiling start to corrode, due to the ingress of moisture and acidic elements. Over time, this causes the concrete ceiling cover to crack and fall off.

This is typically seen in old flats like this one, which is 45 years old, explains HDB.

Though so, residents need not worry as such incidents do not affect the overall structural integrity of the building.

They have since helped the family clear up the debris and repair works are set to begin on Friday (22 May).

As this is a rental flat, HDB express that they will be covering the full cost of repair.

HDB urges all residents to be alert. Should they notice any signs of spalling concrete, renovation works must be done to prevent further degradation.

We hope the boy didn’t sustain any serious injuries and will make a full recovery soon.