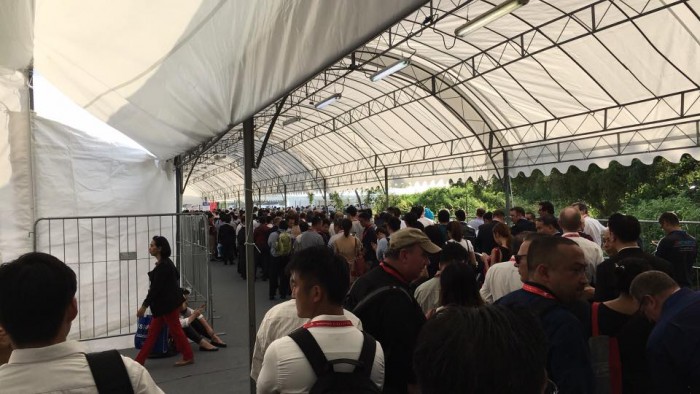 Visitors of the Singapore Airshow being exploited to no end

Trade visitors at the Singapore Airshow 2016 left with dampened spirits and a hole in their pockets on Tuesday (16 Feb) due to the poor organization.

Because this happened during the first day of the Singapore Airshow:

The waiting time for a taxi at the Singapore Airshow stretched over two and a half hours, leaving many visitors of the Airshow furious under the sweltering heat.

Organiser Experia Events not only forbade taxi bookings, but also charged $8 for a shuttle bus ride each way, and a surcharge of $10 for taxi rides from the event. These $8 shuttle buses only brought passengers from the Changi Exhibition Centre to the Singapore Expo.

Bicycles and personal mobility devices (PMDs) are also prohibited, all in the name of traffic congestion and the lack of parking space.

Event organisers barely managed traffic and the queues were hectic

However, even with these charges, traffic and human congestion did not to ease.

Traffic issues were further aggravated, as only 2 taxis entered the exhibition despite space for five cabs at any one time.

According to Channel NewsAsia, a visitor said that the queue could be better managed with barricades. “There appears to be five or six different queues merged into one. It’s quite chaotic,” he said.

By 7pm, more taxis were coming in. However, most were premium vehicles, such as Mercedes Cabs and Chryslers.

Oh, and don’t forget about the extra $10 surcharge.

Visitors’ reaction to the never-ending queues

Many of the visitors were frustrated with the waiting time and demanded for taxi bookings to be permitted over the next few Airshow days.

John speaks of nothing but the truth. 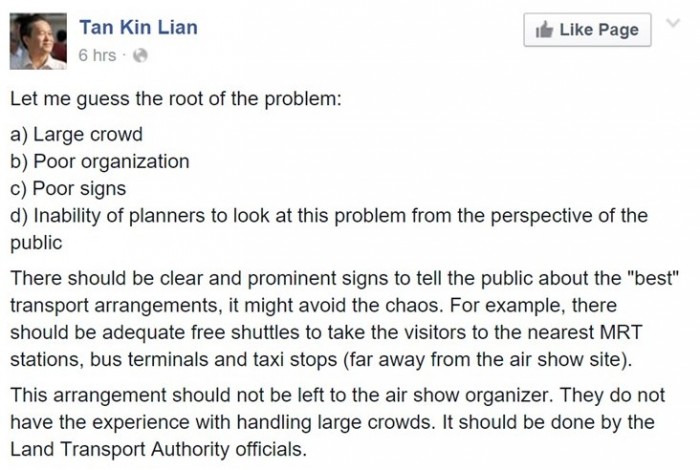 It appears that Jennie does not have any plans anymore this weekend.

We also found out that driving your own car into the Airshow costs about the same as a concert ticket to 5 Seconds of Summer.

Is attending the Singapore Airshow worth it?

If you are a plane-fanatic, waiting more that two and a half hours for a taxi might not mean anything to you.

Because sitting in a Black Knight F16C Falcon trumps having to wait for as long as the running time of The Revenant.

Meanwhile, for the rest of us who want to go because it is the next big thing:

Save the date doing something that more enjoyable this weekend. You do not want to worsen your Monday blues.