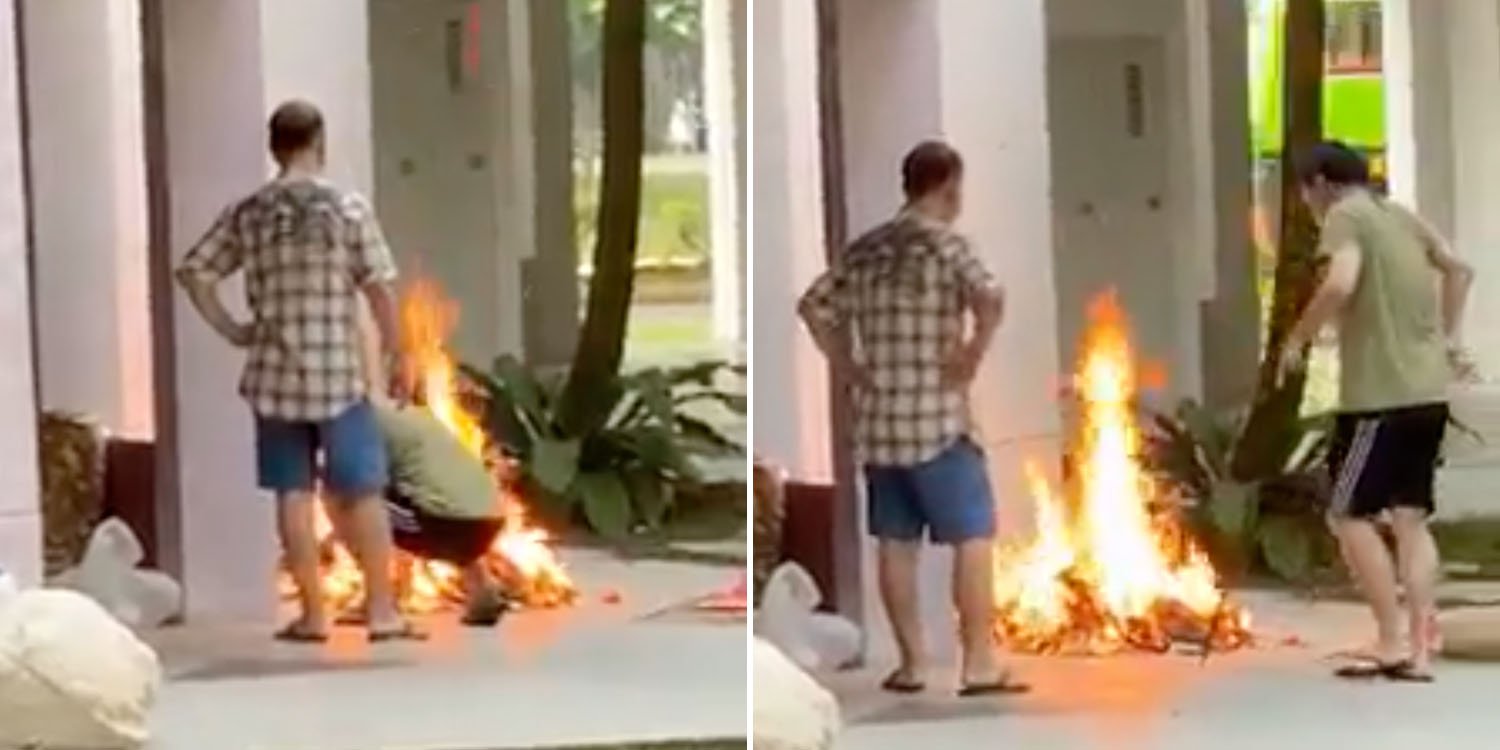 It’s that time of the year again — the Hungry Ghost Festival is upon us.

During this time, it’s commonplace to see people burning joss sticks and incense papers. While some follow safety guidelines, others tend to play with fire — literally.

For example, these 2 men seen in a Facebook video next to a bonfire of joss paper that was directly on the ground, next to an HDB block. 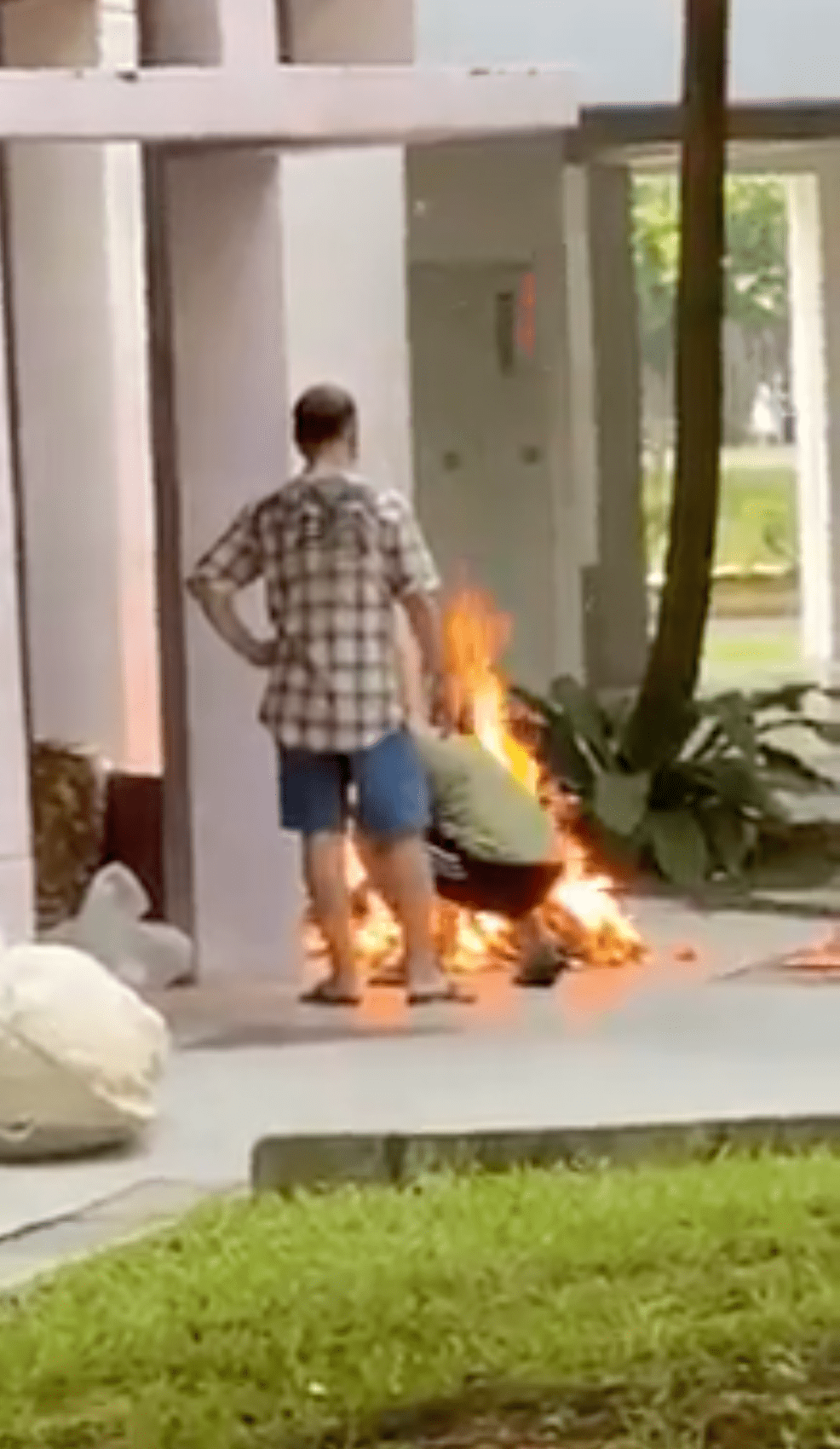 The incident drew flak from netizens who saw their behaviour as inconsiderate and socially irresponsible.

The video was posted onto the All Singapore Stuff (ASS) Facebook page on Sunday (23 Aug), apparently contributed by a reader.

According to the caption, this was recorded at Blk 206B, Compassvale Lane in Sengkang. 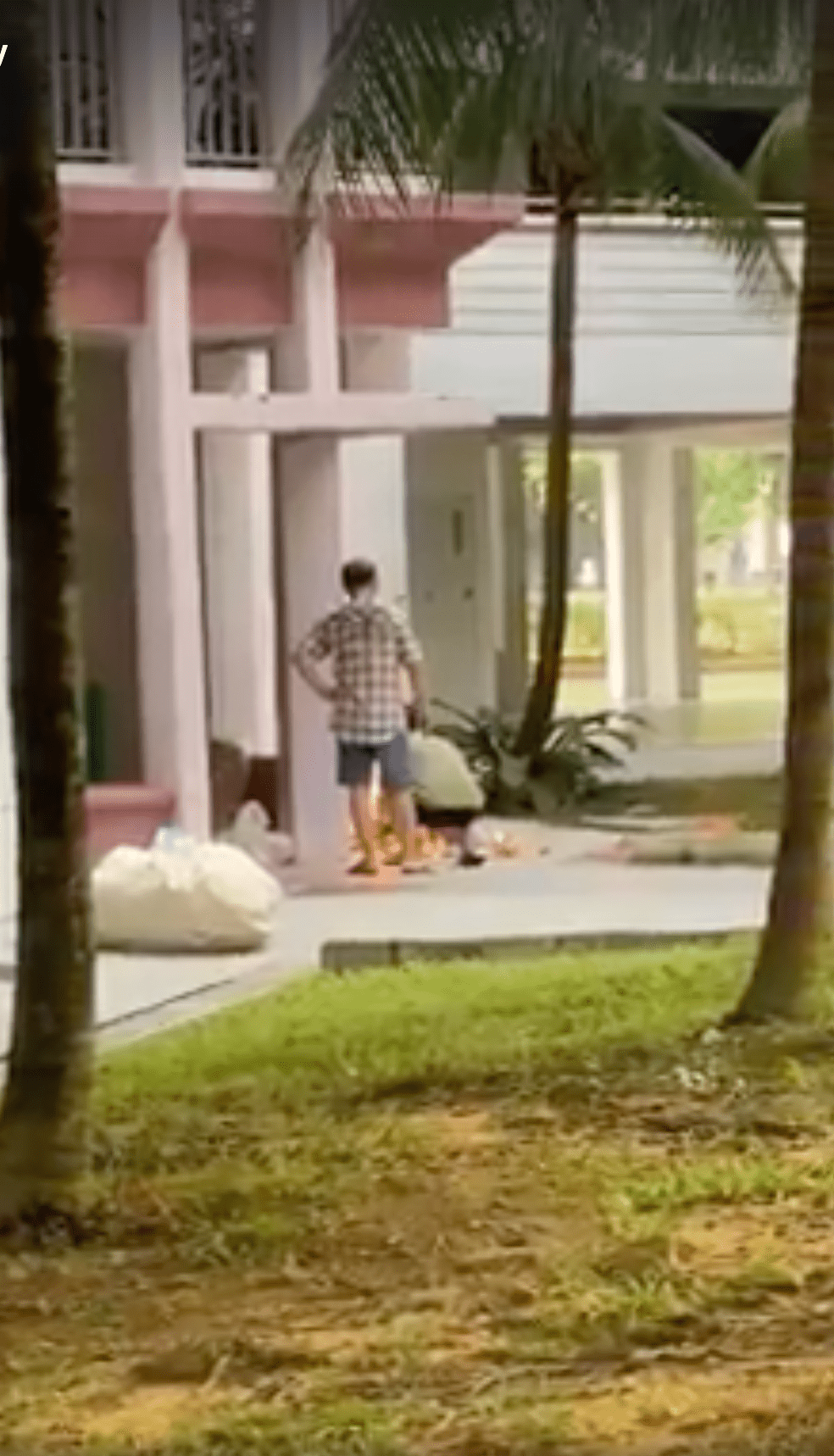 In the video, it seems as if the fire soon got a little out of hand, and became a bonfire, right below a residential block. 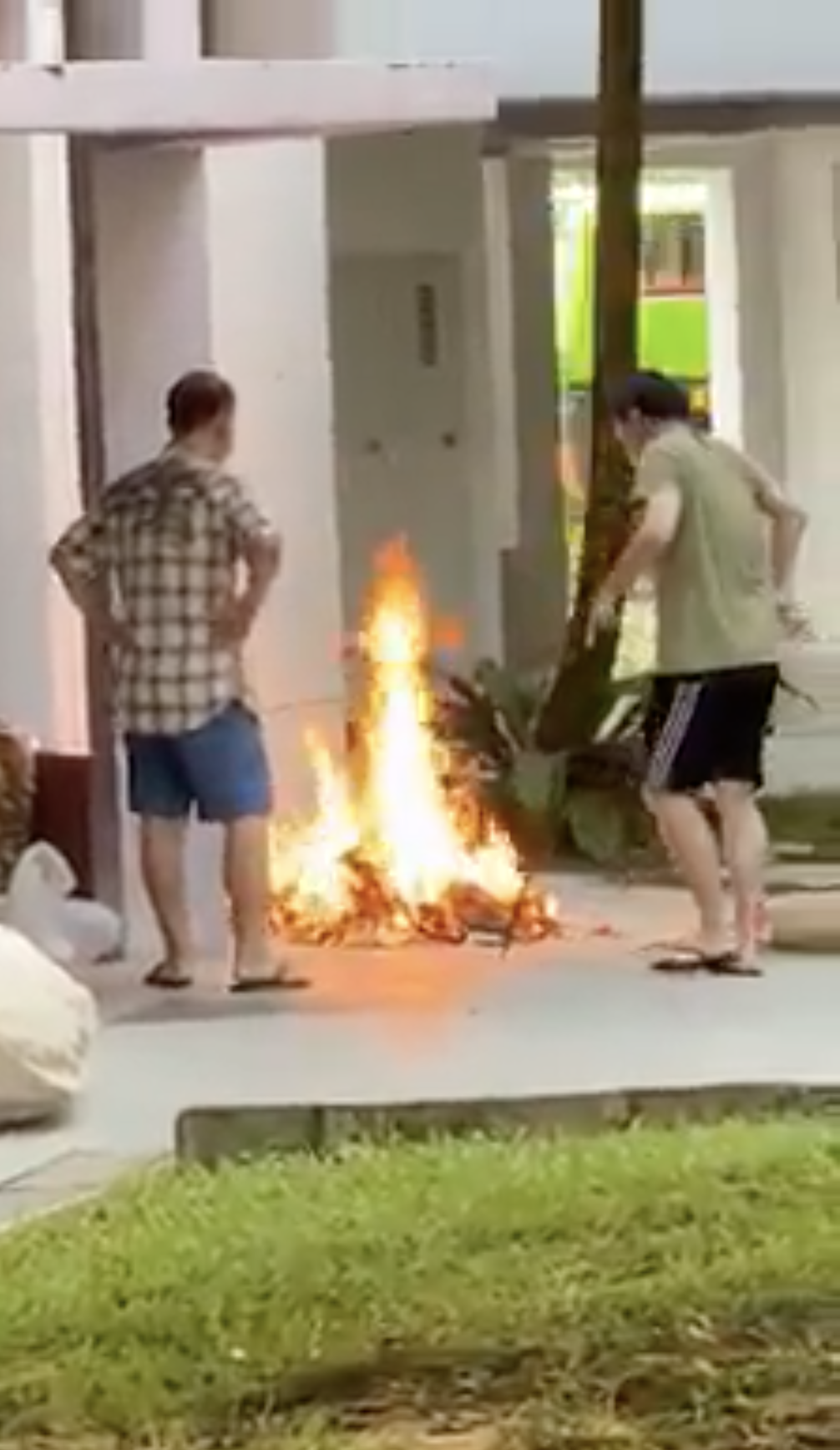 In case you weren’t aware, the 2 men were flouting the rules by burning joss paper directly on the ground instead of using an incense burner or metal container.

ASS’ Facebook post also asked why they didn’t use the metal bins that should be provided at blocks during this time. Doing it this way results in ashes being scattered all over the ground.

Netizens were quick to condemn their behaviour.

Some felt that although there was nothing wrong with honouring the tradition of paying respects to our ancestors, it should be done in a more considerate manner.

Others felt that were giving the estate cleaners extra work creating a mess.

One netizen felt that most people conducted the practise in a responsible manner.

However, a small handful of people like these give the tradition a bad name and test the limits of tolerance of others in the community.

She also took the chance to thank those who follow the rules.

Burning should take place only in burners & containers

The Singapore Civil Defence Force (SCDF) has also put out fire safety guidelines for the public during the 7th month.

One of them states that incense papers should be burnt only in incense burners or metal containers provided by the Town Council.

For reference, here’s what one of them looks like. 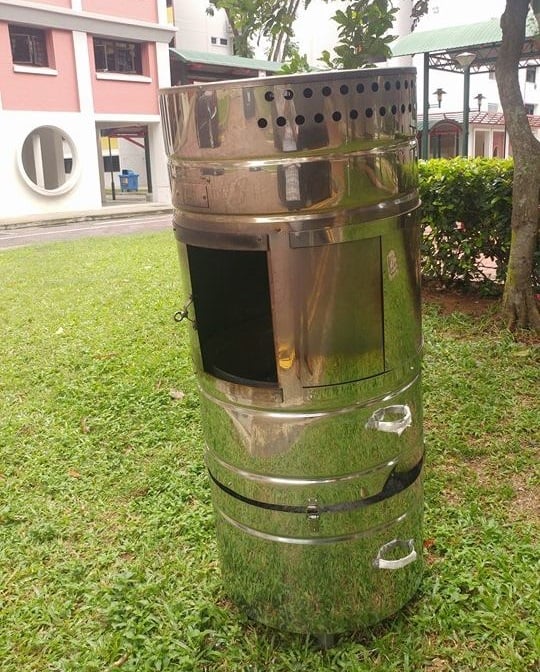 Burners/containers must be placed far from residences

The SCDF also advised for these burners and containers to be placed on sturdy ground far from residential premises and combustible materials.

Thus, even if the 2 men in Sengkang had burnt their paper in a burner or container, they were still doing it too near the block.

If the fire spreads to the block itself, it would threaten the safety of all the residents there.

All fires must be also be fully extinguished before leaving, the SCDF said, and burning joss sticks and candles shouldn’t be placed on grass patches or fields.

As grass is combustible, having the fire too close is also a hazard. Safety guidelines are still being disregarded

This is definitely not the first time people were caught disregarding safety guidelines.

Although advised against it, candles and joss sticks can still be seen on grass patches, near residences. 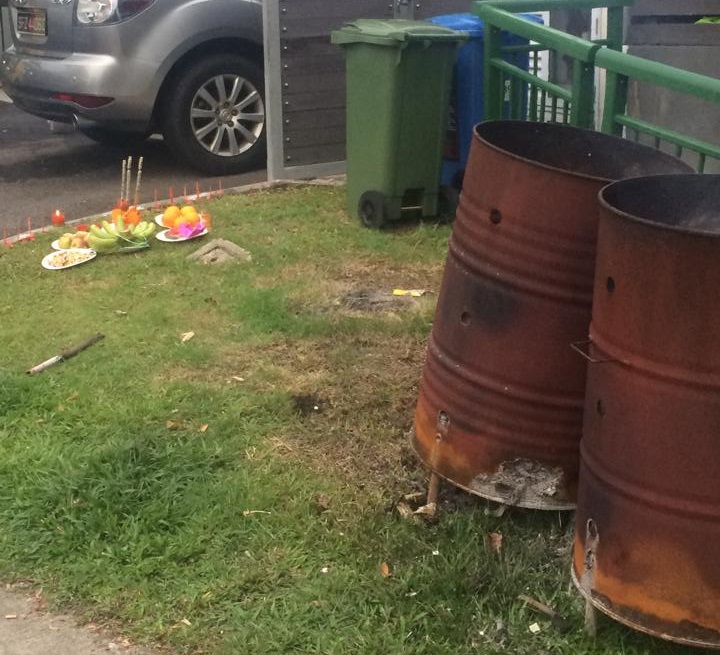 In one case, it even resulted in a car bumper being burnt by the candles.

Do adhere to SCDF safety guidelines

While burning joss paper during the Hungry Ghost Festival is a time-honoured tradition, worshippers should show consideration for others in the community.

If proper precautions aren’t taken, the well-being and safety of your neighbours will be threatened.

So do play your part and adhere to the advisory put out by SCDF.