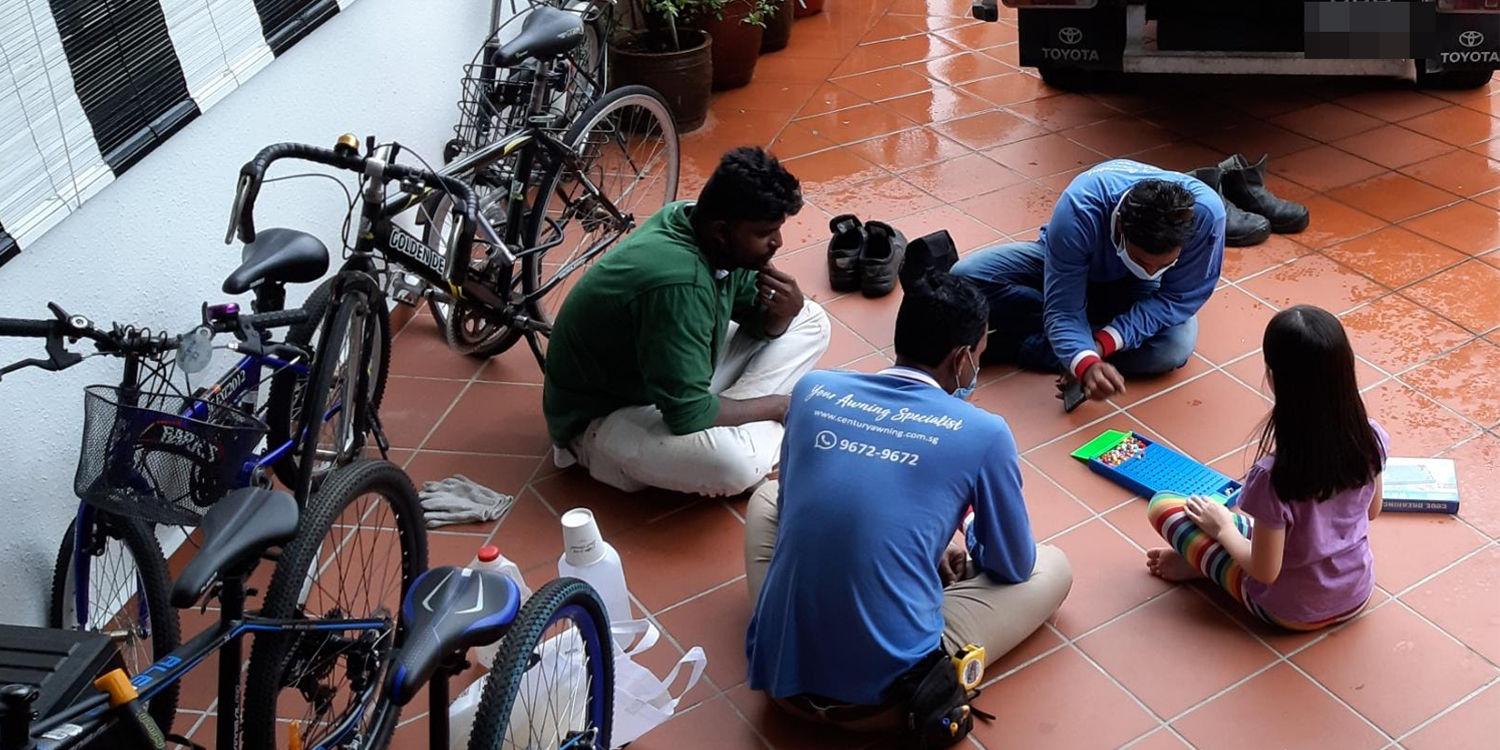 A heartwarming friendship made across different nationalities.

Despite being the labour force which turns our skyscrapers, HDBs, and shopping centres from blueprints to reality, migrant workers in Singapore often face discrimination. 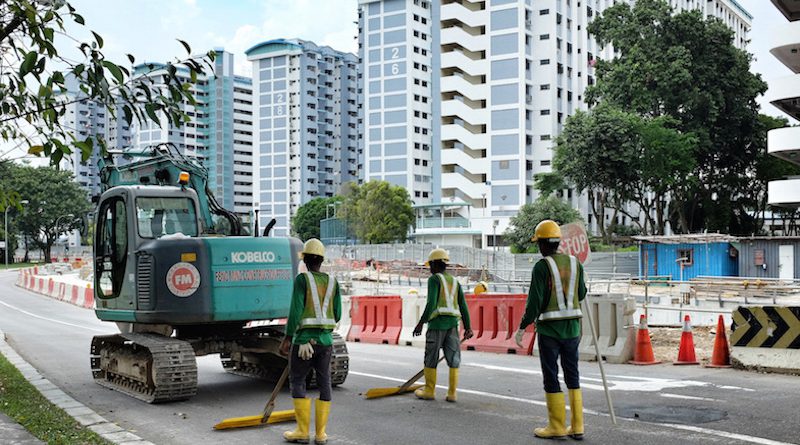 To a young girl, however, such prejudices seem like a foreign concept.

On Tuesday (22 Sep), The Royal Singapore director Mr Yang Kaiheng took to Facebook to share a moving scene he witnessed when his young cousin jio-ed migrant workers to play board games while they were waiting for the rain to pass. 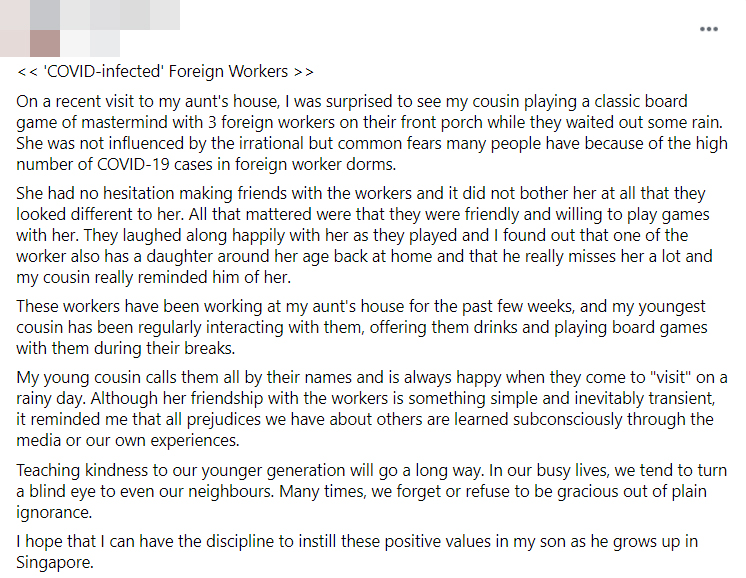 The touching recount has since garnered over 2,500 shares at the time of writing.

In his post, Mr Yang shared that he was “surprised” to see his young cousin with 3 other migrant workers playing a game of Mastermind on the front porch. 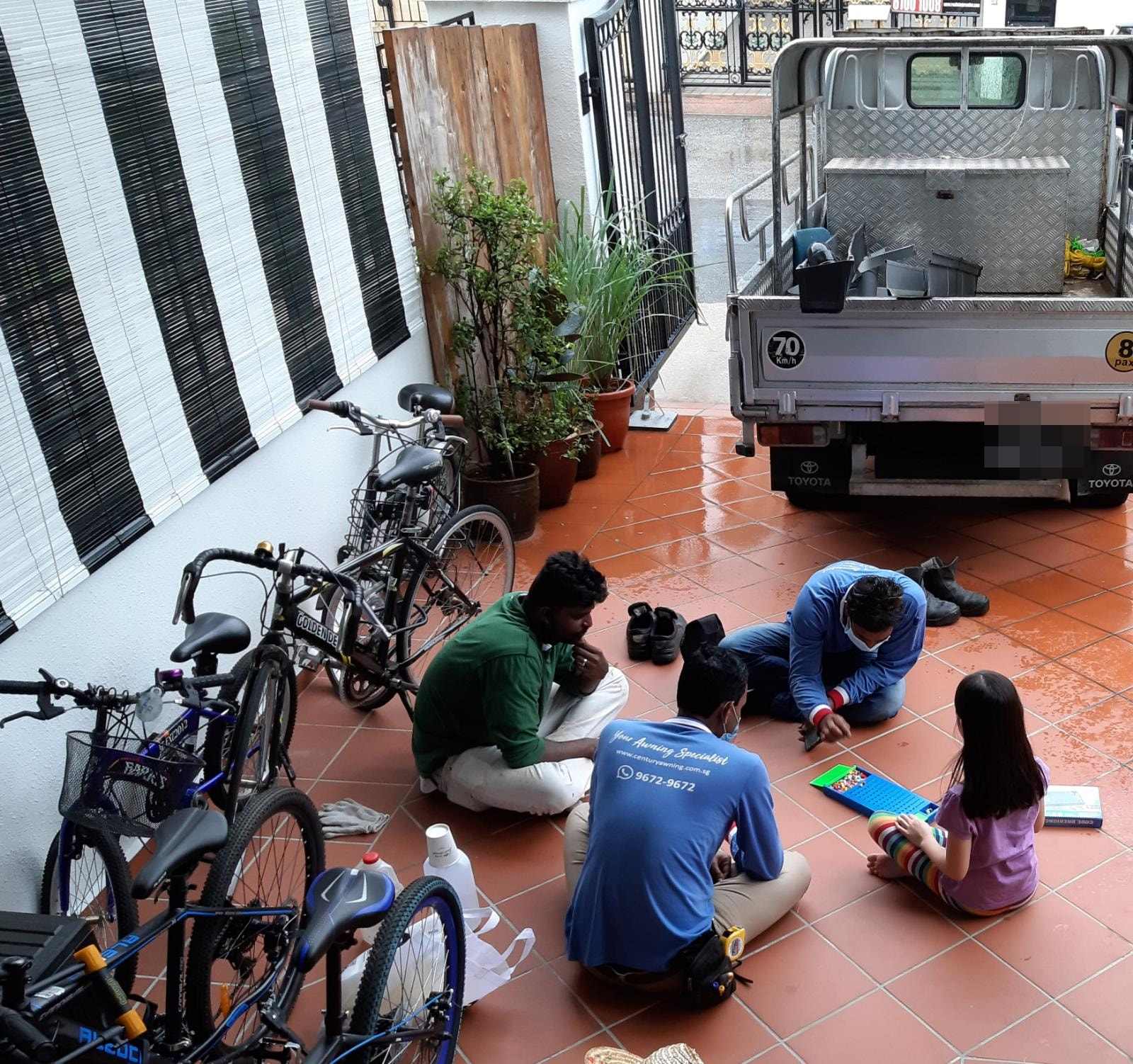 It was pouring then, and the workers were waiting out the rain.

He noted that his young cousin seems unperturbed by “irrational, common fears” that some have due to the high number of coronavirus cases in workers’ dormitories.

Also treats workers to drinks during their breaks

Turns out, the young girl had been jio-ing the workers to such game sessions over the past week, as they worked on a project at the house.

Apart from board games, she would also offer them drinks during their breaks.

By now, the cousin has gotten so close to the trio that she addresses them by name.

Mr Yang’s cousin reportedly held no reservations when it comes to befriending them.

According to Mr Yang, it did not matter to her that they were of different skin colours.

Instead, the only things that mattered to her were that they were friendly and willing to play games with her.

The netizen later learned that one for the workers had a young daughter back home who’s around the same age as Mr Yang’s cousin — who reminds the worker of his own child.

Discrimination is a result of external factors

Reflecting on the incident, Mr Yang pointed out that the prejudices some of us now have are the results of external factors like media and our own lived experiences.

These biases are not inherent to us, and his young cousin is an example of that.

Moving forward, Mr Yang hopes he would have the discipline to inculcate such “positive values” to his own son too.

Humans are not inherently discriminatory

Mr Yang’s recount is a touching reminder of how humans are not inherently discriminatory.

We might not share the same colour, language, or accent, but that’s no reason to hold on to unfound assumptions about each other.

The more we treat others with distrust and hostility, the likelier it’ll be for them to retaliate in a manner that reinforces our earlier beliefs.

Does that not sound like a vicious cycle that we ought to break out of?