Must Share News – Independent News For Singaporeans
Home Viral Facebook NTU Once Rejected Canadian’s Application For Chinese Course, Because He Was Chinese 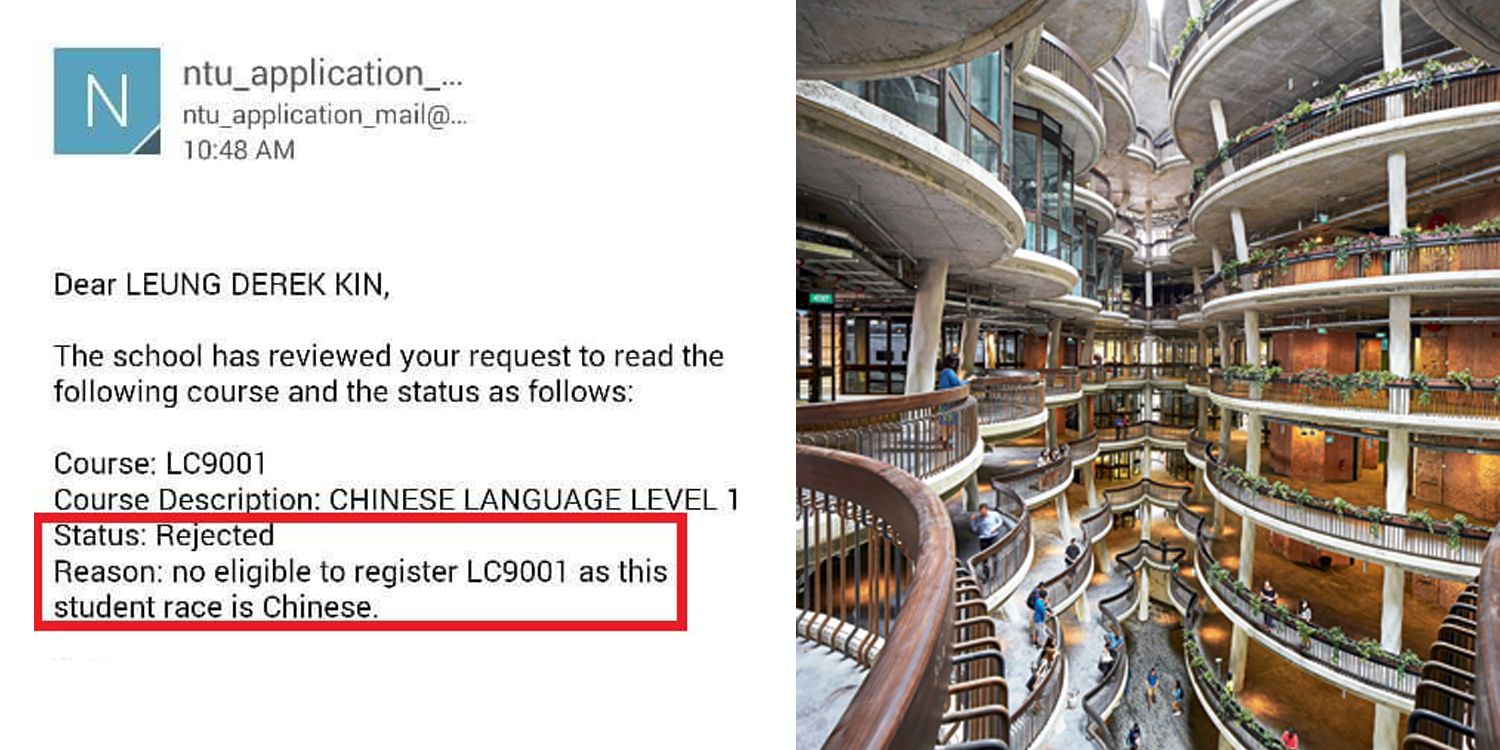 As a wise man once said: you can’t always get what you want, but if you try sometimes, you just might find, you get what you need.

Unless you’re of Chinese descent and applying to Nanyang Technological University (NTU) to study Chinese.

Derek Leung, a Canadian-born Chinese man, never got the chance to study his mother tongue growing up in Canada.

As he recounted in a post in Subtle Asian Traits Facebook group, he shared that NTU once rejected his application to take a Mandarin course as he was of Chinese descent.

Never got the chance to study Chinese

As a child, Mr Leung never got the opportunity to study Chinese. Growing up in Canada meant that he was disconnected from a lot of the elements of Chinese culture that we might take for granted.

It might be hard for those of us who have grown up here to fathom what that’s like. Just try to imagine speaking to your ah ma in English. Yeah, trippy.

So when he got the opportunity to do a university exchange semester in Singapore some years ago, at a traditionally Chinese university no less, Mr Leung was understandably excited.

As he recounted to Coconuts Singapore,

NTU says his family background made his application unfair

Apparently, NTU disagreed, because they rejected his application for a Mandarin Chinese module based on his ethnicity.

When he attempted to apply for a basic Level 1 course, the school found him ineligible to take it. One might draw the reasonable assumption that it was because he was Chinese and therefore might have an unfair advantage. This of course fails to account for his actual cultural background and experience growing up.

Mr Leung ended up settling for another module after a course coordinator told him that his family background made it unfair.

NTU policies could have changed over time

As a Korean who moved to Singapore at age 5, the commenter never had any formal Korean schooling. He applied to study Korean at NTU, albeit at Level 5 instead of Level 1. Despite knowing conversational Korean, he however noted that his written scores were rather poor.

NTU accepted him as a ‘legacy student’, which apparently are students who do not know their mother tongues and have applied to study them.

Although he had a tough go of it, he eventually finished his Level 5 and 6 with NTU. It seems, at least according to the commenter, that perhaps the policy at NTU has changed in the years since Mr Leung’s rejection.

We suppose it wasn’t very unreasonable on NTU’s part to reject his application. According to their website, Level 1 courses are “strictly for students with no prior knowledge of the language”.

In contrast, the Level 5 Korean course is described as being at a ‘higher intermediate’ standard.

The Level 1 Chinese course is meant to be an introduction to Chinese, and covers very basic materials.

Given that the module’s contents are actually incredibly simple, someone taking it under false pretenses with prior knowledge of Chinese would essentially be handed an easy ‘A’.

In the interest of preventing this sort of exploitation, it makes sense to have a general policy. It’s not an unreasonable assumption to make that ethnic students would have at least some interaction with their mother tongues, which automatically disqualifies them from Level 1 courses.

That having been said, it also might be worth further investigating each student’s application. It’s difficult to give the benefit of the doubt most times, but that doesn’t mean we can’t afford to take a closer look.