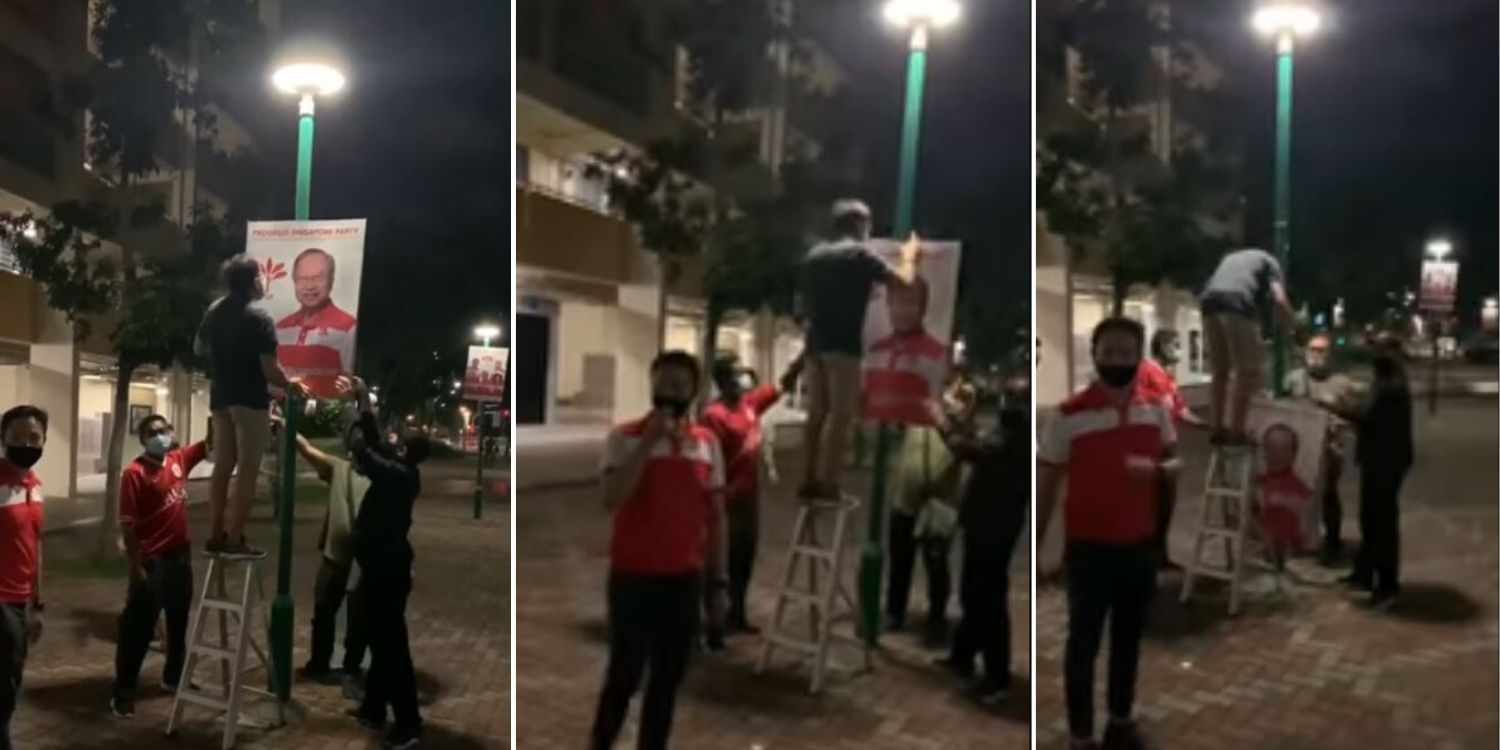 UPDATE (3 Jul, 11.25am): PSP chief Tan Cheng Bock has said in an Instagram video that he’s upset and sad that his posters were taken down.

He asked “social media friends” to help spread the message and continue to support him.

UPDATE (3 Jul, 10.30pm): The Elections Department was quoted by The Straits Times as saying that the West Coast Town Council asked for the posters of both PSP and PAP to be removed as they were tied to “open-space lamp posts” that typically see a high volume of traffic.

West Coast GRC PAP candidate S. Iswaran has also said in a Facebook post that both PSP and PAP were told to take down posters, as they had contravened the rules.

The Progress Singapore Party (PSP) is alleging that its election posters in West Coast Group Representation Constituency (GRC) had to be taken down on orders from the Town Council.

The party has said it will update the public later once it has checked on the situation.

Video shows poster being taken down

In the video, a poster that clearly shows Dr Tan’s face and the logo of the PSP is being taken down by a few men.

The person taking the video asks them why they’re taking down the poster, to which a man wearing what looks like a PSP polo T-shirt says the Town Council told them to do it.

He then says, “but theirs is looking okay what”.

It isn’t immediately clear what he’s referring to when he said “theirs”. Neither does the video show what he’s talking about. In a post on Thursday (2 Jul) night, the Facebook page of the PSP West Coast team said it was ordered by the West Coast Town Council to take down 50 posters. 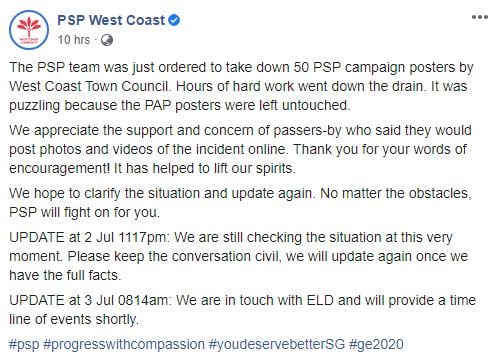 PSP in touch with the Elections Department

The PSP West Coast’s latest update on Friday (3 Jul) morning said that it was in touch with the Elections Department (ELD), and will provide an update shortly.

Last night, it said that it was checking the situation, and urged netizens to be civil.

The alleged incident comes after some of its posters for Chua Chu Kang GRC were allegedly vandalised. The party made a police report after finding out about the incident, and a 51-year-man was arrested on Thursday (2 Jul), reported TODAY Online.

Please do not speculate

While the sight of party posters being taken down might be a discouraging sight for PSP supporters, please do not speculate on what’s going on yet.

The party is now trying to understand what is happening, and will update us further on developments.

In the meantime, do remain civil and continue healthy discourse online.

We wish the 2020 General Election candidates all the best in their campaigns.