Stall In Rivervale Mall Sells Curry Rice Pork, But Signboard Is In Malay

UPDATE (7 Sep, 11.39am): MUIS has responded to the incident, urging Muslim consumers to be discerning. You can read their full statement below.

In a multireligious society like Singapore, it’s important for everyone to respect each other’s differences.

Certain communities might choose to abstain from eating certain food for religious purposes. For example, the Malay community – majority of whom are Muslims – considers eating pork as haram.

Knowing this, a food stall’s signboard in Malay has certainly raised eyebrows when pork is apparently sold there. The stall is located within Rivervale Mall. Netizens have shared the news on Facebook, WhatsApp and Telegram over the last few days, advising Muslims in the area to be careful.

According to a post in HALAL Makan Places Facebook group, the netizen alerted everyone to the stall’s name called Sedap Goreng.

Even though the name is in Malay, he cautioned the Malay Muslim community to be wary, as the stall apparently sells curry rice with pork. 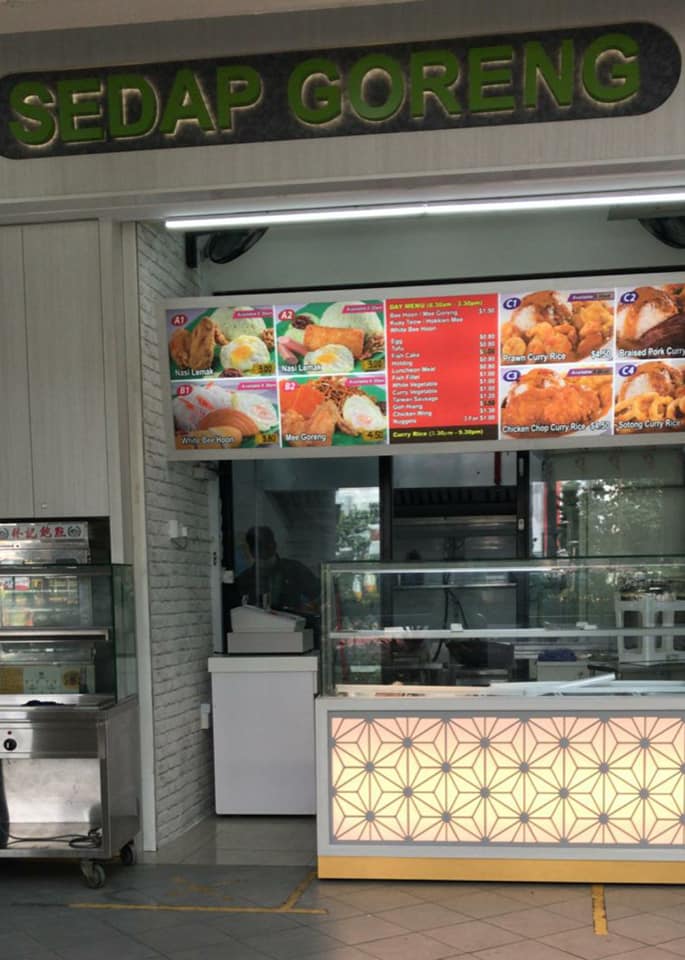 If you look closely at the top right, C2 item in the menu reads “braised pork curry.”

The netizen said he suspects that the business is owned by a non-citizen, who needed to have higher regard for respecting religious sentiments in Singapore.

Other netizens were shook at the revelation. One of them left a comment, urging diners to better distinguish halal shops with Malay names.

Don’t be easily mistaken when it comes to shop names that are in Malay. If they aren’t halal, don’t buy. Even for other shops who don’t sell pork, we wouldn’t know whether their chicken is truly halal. It’s a different story if it’s an Indian Muslim shop though.

Another netizen said if the shop doesn’t have a halal certification, perhaps it is fine for them to sell.

Don’t have halal certification, perhaps they can sell. It is up to us to be cautious and choose to not patronise it, even though the name is in Malay. Sometimes, the owner could be a Chinese Indonesian.

Another netizen also echoed the same sentiment, saying that: If they don’t have a halal certification, they have the right to sell pork.

If don’t have halal certification, there’s no point even if we reported to MUIS (Islamic Religious Council of Singapore). So they have the right to sell pork. So relax, don’t be upset.

Businesses should do their part & not mislead consumers, says MUIS

Responding to MS News‘ queries, MUIS said a stall named in the Malay or Arabic language or decorated with crescent moon or stars does not mean it is owned by a Muslim and/or serves halal food and drinks.

Muis recommends Muslim consumers to be discerning when making food choices which may include:

That said, MUIS stressed that businesses should also play their part by naming or identifying their stalls in a manner that do not mislead consumers who may have specific dietary requirements.

Together, let’s do our part to understand and appreciate one another culture, religious sensitivities and prevent unnecessary misunderstanding.

Important for Muslim consumers to be discerning

In his post on 3 Sep, he said this issue is to raise importance of consumers in the halal market to be discerning.

Even though there aren’t any laws that prohibits people from using a Malay name for food business, he stressed that there is a need to be mindful that food businesses – like Sedap Goreng for this instance – do exist.

Given Singapore’s multiracial and multicultural society, he urges for greater sensitivity towards the use of such names to avoid offending others.

Mr Mohd Khair remarked, “If ever a Malay name is to be used for any food business, and it is non-Muslim-owned, a degree of carefulness need to be incorporated into the menu offerings and how the foodstuffs are prepared.”

It is truly unfortunate that a business is found selling pork despite their stall name. We agree that greater sensitivity could have been afforded here, considering the fabric of Singapore’s society.

Those who aren’t careful could have missed the menu item in question, and end up buying non-halal food unknowingly.

As we await further clarifications from the management and authorities, it is best to confirm that a stall is halal-certified before proceeding with your purchase.