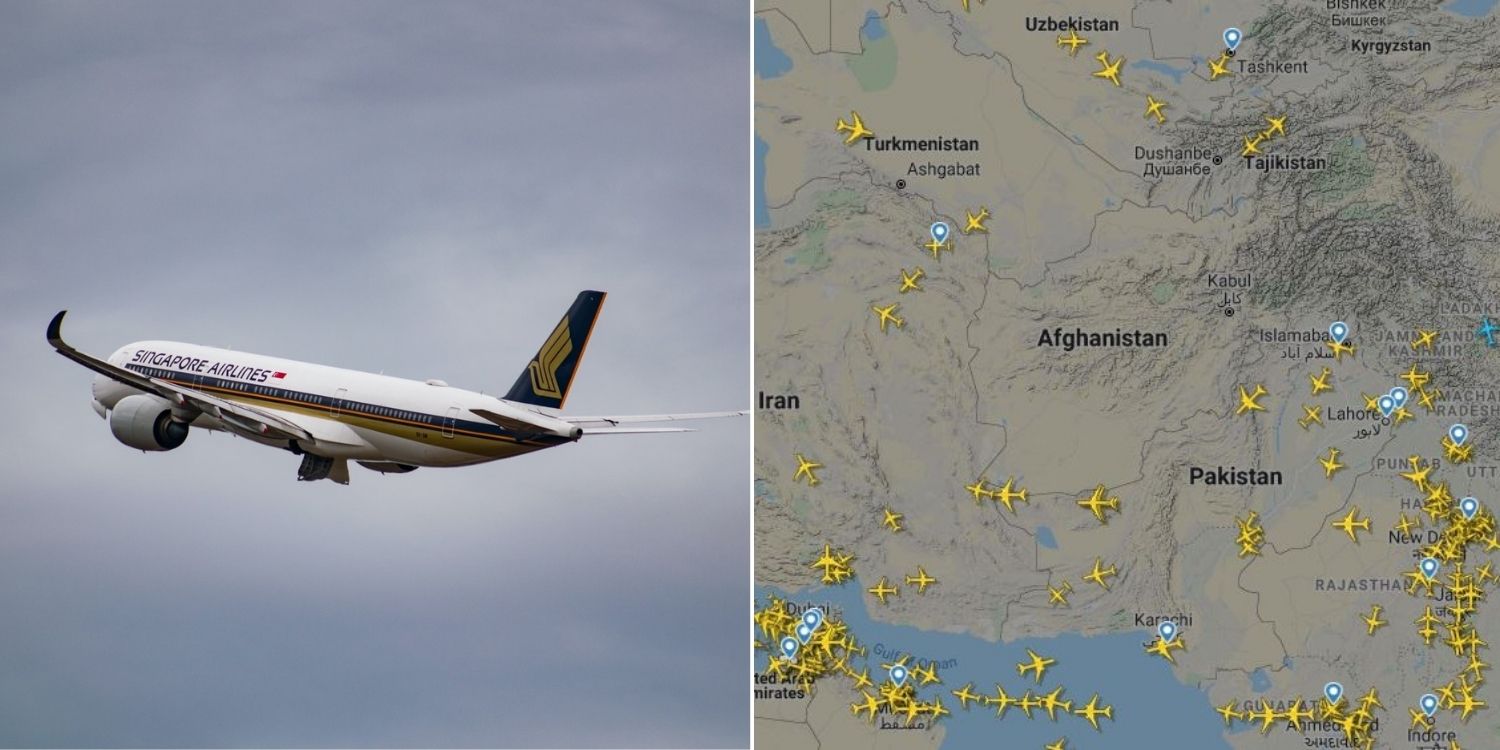 Before Covid-19, one of the reasons air travel was dangerous was because the plane might fly over war-torn parts of the globe.

For that reason, airlines would avoid flying over certain countries from time to time, to avoid being shot down. 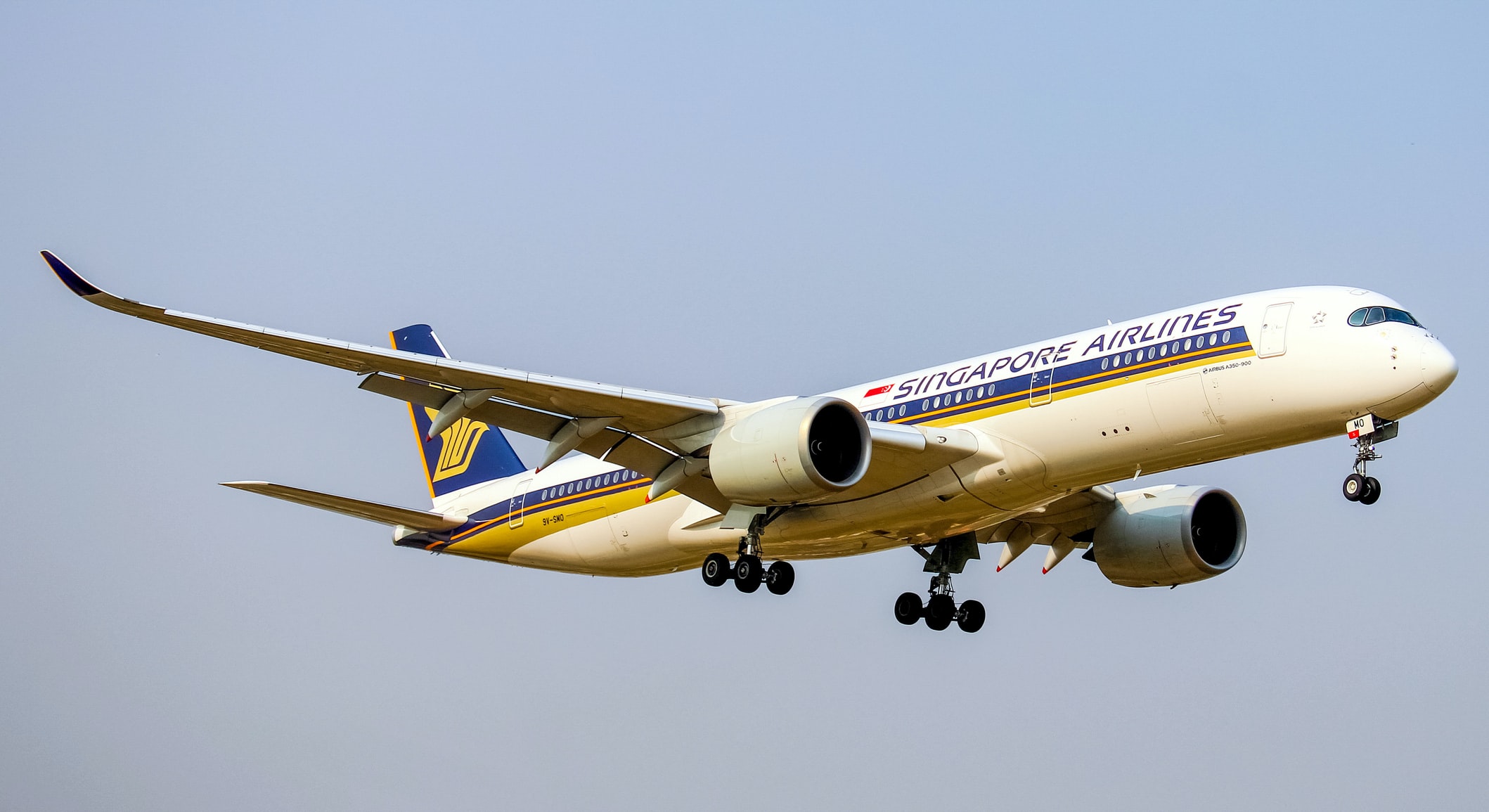 This comes after the Taliban militant group took over the capital of the middle eastern nation.

In a tweet on Monday (16 Aug), flight tracking website Flightradar24 reported that some airlines were rerouting flights to go around Afghanistan.

SIA was one of them. 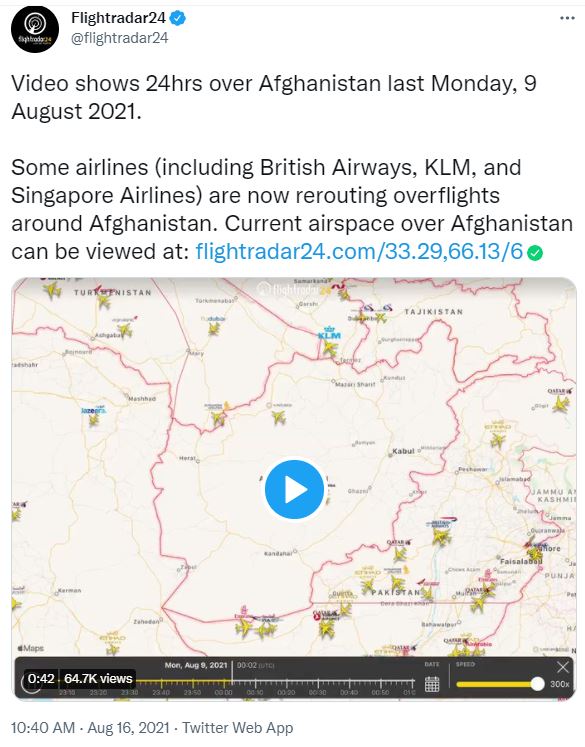 It also uploaded a time-lapse video clip of airlines flying over the country on 9 Aug.

SIA and Scoot flights were among the many that were detected in the airspace on that day. However, all that has changed.

One of the 1st flights to be diverted was SQ319 from London to Singapore on Sunday (15 Aug).

According to Flightradar24, this was its normal route that it took on 14 Aug – note it flew over Afghanistan at roughly the midpoint of the flight: 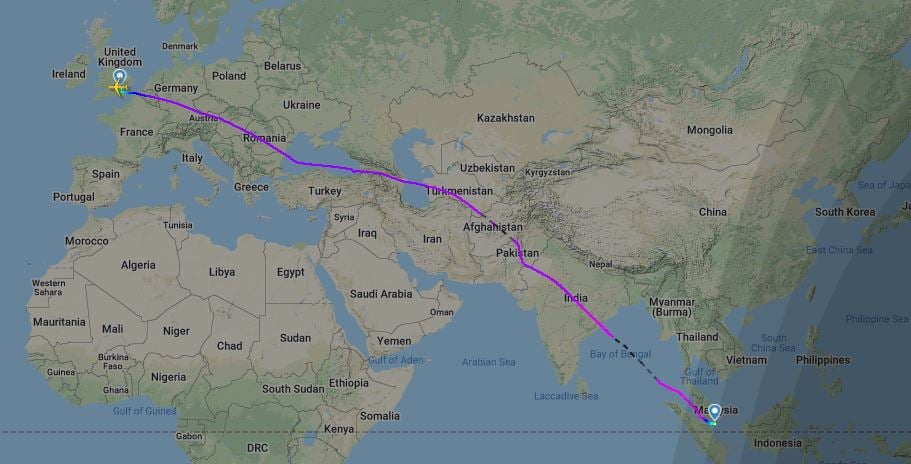 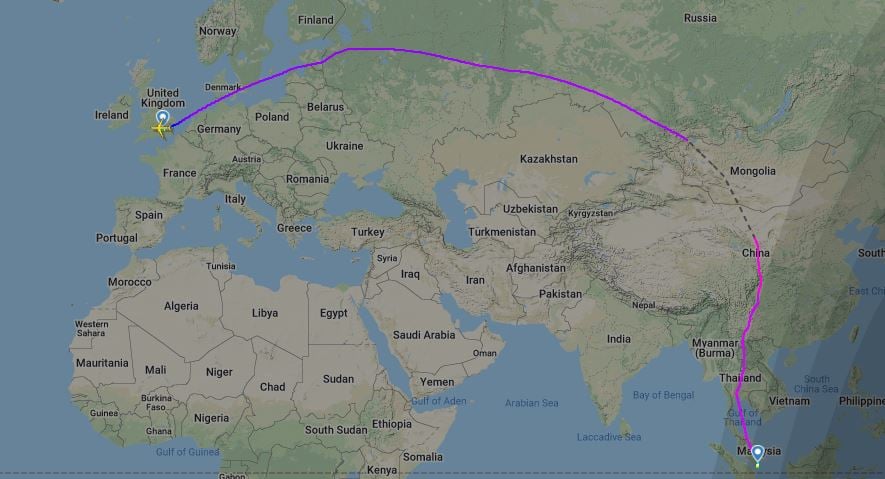 To avoid Afghanistan, the plane had to fly a circuitous route north-east towards Scandinavia, then Russia before dipping south over China towards Singapore.

The amended flight ended up taking more than 13 hours – 1 hour longer than usual.

Emirates flight doubles back to origin

SIA wasn’t the only flight to be diverted.

Emirates flight EK640 from Dubai to Afghan capital Kabul ended up looping back on 15 Aug. 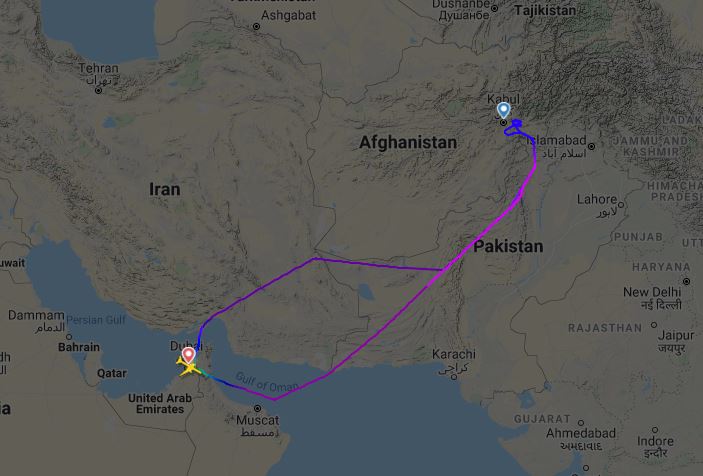 EK640 from Dubai to Kabul was diverted back to Dubai
Source

It took off from Dubai and flew all the way to Kabul before circling the city and flying back to Dubai without landing.

SQ308 from Singapore to London on 16 Aug, which is currently in the air as this article is being written, has also avoided Afghanistan.

Instead, it’s flying a more southerly route than usual across the Persian Gulf and Saudi Arabia, before  turning north-west over Egypt and flying towards London. 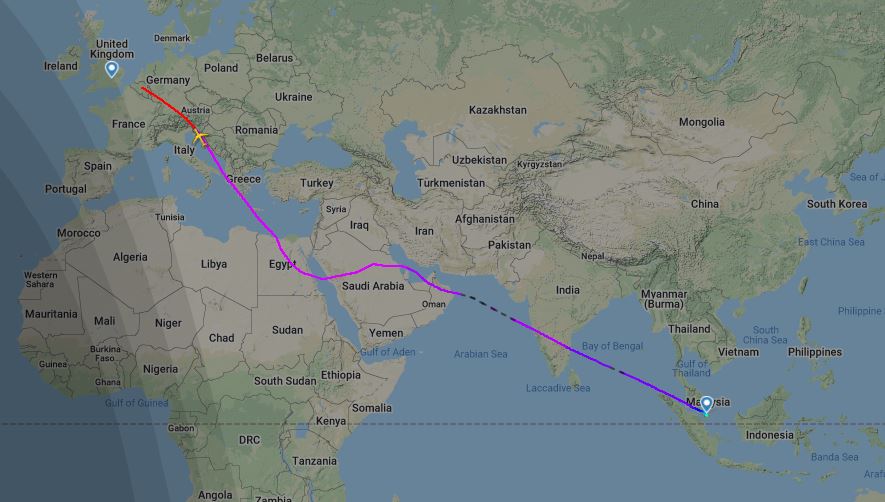 According to Flightradar24’s real-time flight tracking, almost all airlines in the world are now not flying over Afghanistan.

There’s a big hole in the airspace over the country, while planes are readily flying over neighbouring countries like Pakistan and Iran. 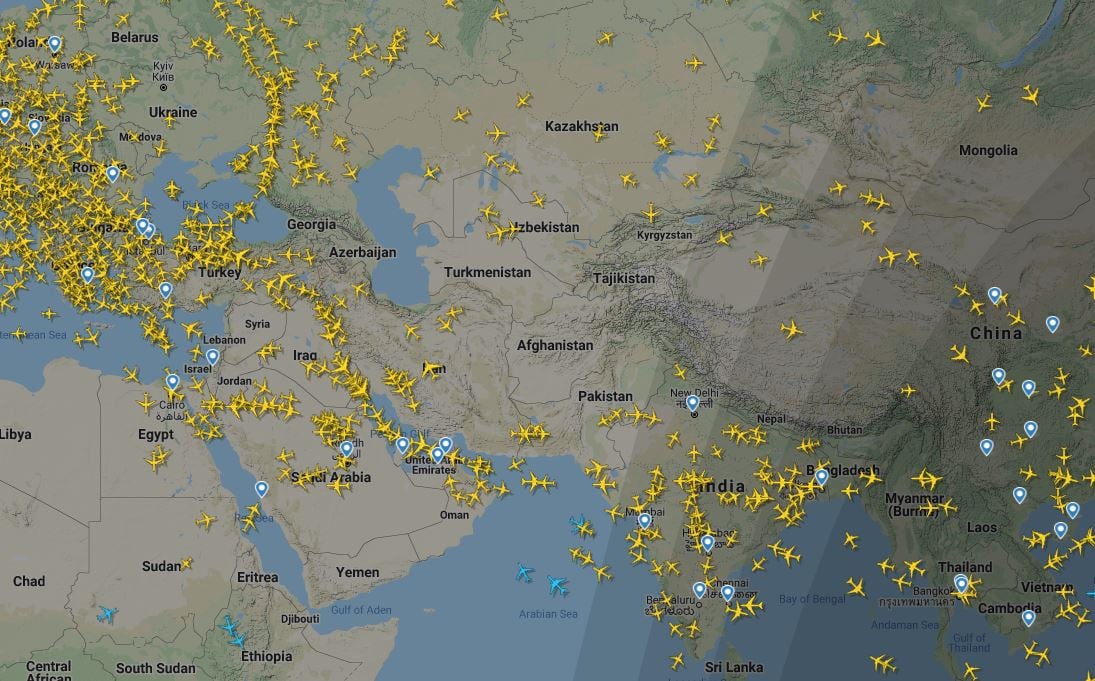 SIA was quoted by Channel NewsAsia (CNA) as saying that the airline and Scoot are “currently not traversing” airspace over Afghanistan.

This is in view of the latest developments in the country.

What exactly is going on in Afghanistan that has caused this situation?

It all started when United States President Joe Biden said he’ll withdraw US troops from the country from 1 May, ending on 11 Sep. 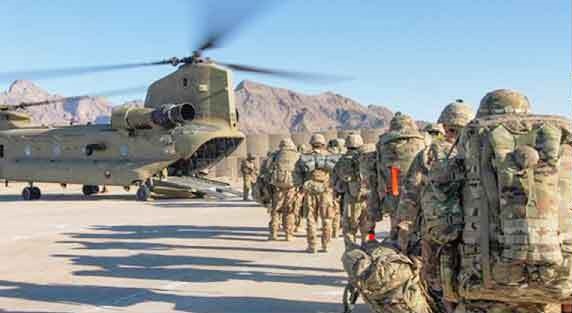 American soldiers have occupied Afghanistan since 2001, when the US waged war there after the 9/11 attacks in New York.

Unfortunately, days after the troops started withdrawing, the Taliban attacked Afghan government troops in provinces across the country.

They quickly took over large swathes of the it, even as US troops finally left their main military base near Kabul on 2 Jul. 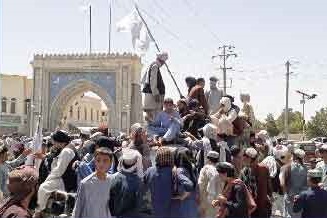 By 21 Jul, the Taliban controlled about half of Afghanistan. Many more cities fell in the coming days.

They started closing in on Kabul by mid-Aug, as the US evacuated its citizens from the capital. 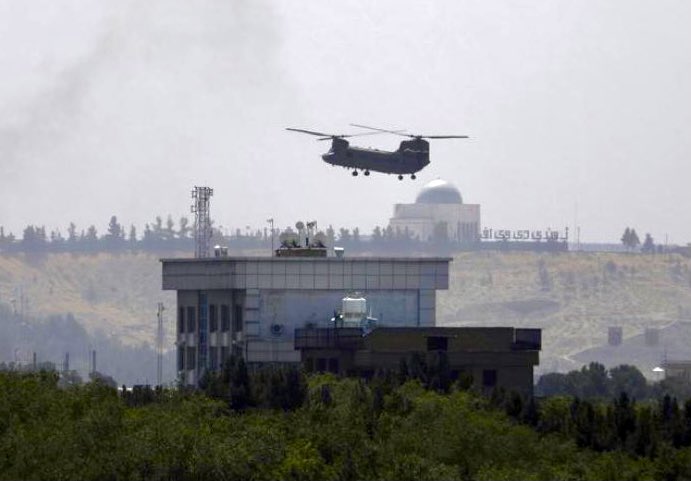 On 15 Aug, the Taliban entered Kabul, conquering the city and causing President Ashraf Ghani to flee the country.

That’s when airlines started rerouting their flights to avoid the country.

Previous cases of planes being shot down

Airlines are taking this precaution because there have been previous incidents of commercial flights being shot down over war-torn countries.

In 2014, Malaysian Airlines flight MH17 was shot down over eastern Ukraine, killing all 298 on board. The region was going through a separatist insurgency at the time. More recently, an Ukraine International Airlines plane flying over Iran was shot down by missiles in 2020. All 176 on board tragically passed away.

Airlines also started avoiding the airspace over Belarus after a Ryanair flight was forced to land in the Eastern European country in May.

An opposition Belarusian journalist and his girlfriend who were on the plane were subsequently detained.

A precaution worth taking

The situation in Afghanistan is still volatile after being taken over by a militant group, and who knows how they’ll react.

Thus, as a precaution, it’s a good decision for airlines to avoid flying over the country for now.

Hopefully, things will improve soon, but an extra hour of flying time is worth it for the peace of mind.