Footage of the incident's aftermath showed the taxi on a grass patch near the pedestrian walkway.

On Wednesday (11 May), a traffic accident took place at a busy junction in Tampines, involving a taxi and two cars.

Seven people were apparently injured in the accident. The police are currently investigating the cause of the collision.

According to Shin Min Daily News, the accident took place at the junction of Tampines Avenue 2 and 7 at about 4pm on Wednesday (11 May).

A taxi had apparently collided with a car and lost control, before driving into a grass patch next to the pedestrian walkway.

In the video shared, a taxi was seen ‘sitting’ on a grass patch with its doors ajar. Beside it was a woman hugging a young boy. 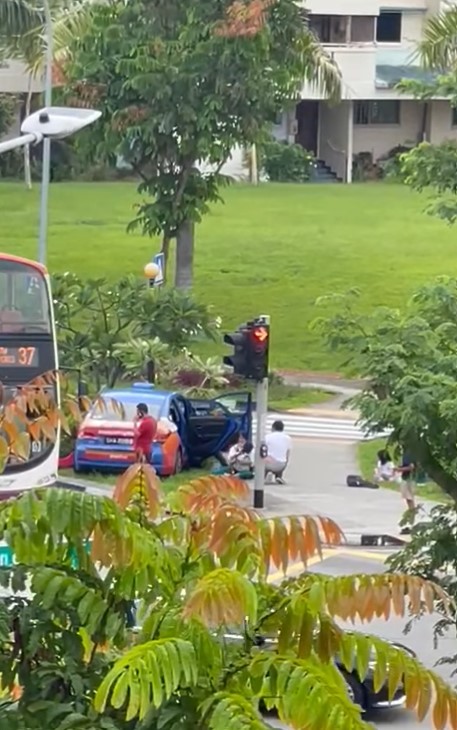 A young girl could also be seen sitting nearby.

Over at the junction, a few people were seen gathered around a red car, with a man attempting to pull one of the doors open. Another silver car was also reportedly involved in the collision.

Police later confirmed that the collision involved two cars and a taxi.

According to The Straits Times, police officers found a 54-year-old taxi driver with four passengers aged between two and 35.

They also found another car with three passengers aged between 51 and 79.

Both groups of people were reportedly conscious at the scene.

One person was assessed for minor injuries and subsequently refused conveyance to the hospital.

While it is currently unclear what caused the collision, road users are urged to always remain vigilant even on roads with lower speed limits.

We hope investigations will bear fruit and that the authorities will be able to find out what caused the accident.