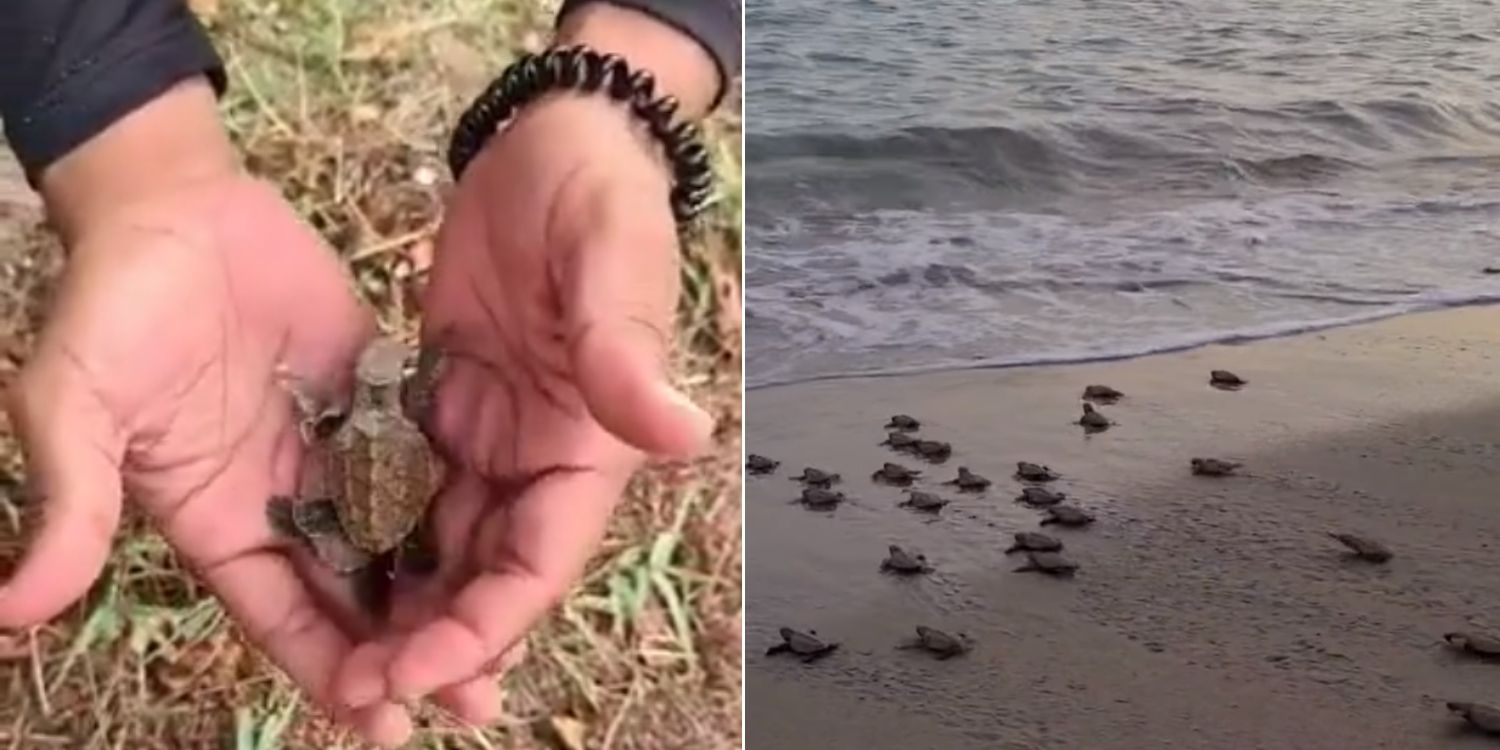 More of a leisure spot than a wildlife hub, East Coast Park (ECP) often sees mostly humans flocking its cycling paths and sandy beaches. But a nest of baby turtles made a special appearance there yesterday (18 Jun).

Some anglers who were heading home after an overnight fishing trip stumbled upon 100 baby Hawksbill turtles who were finding their way into the sea. 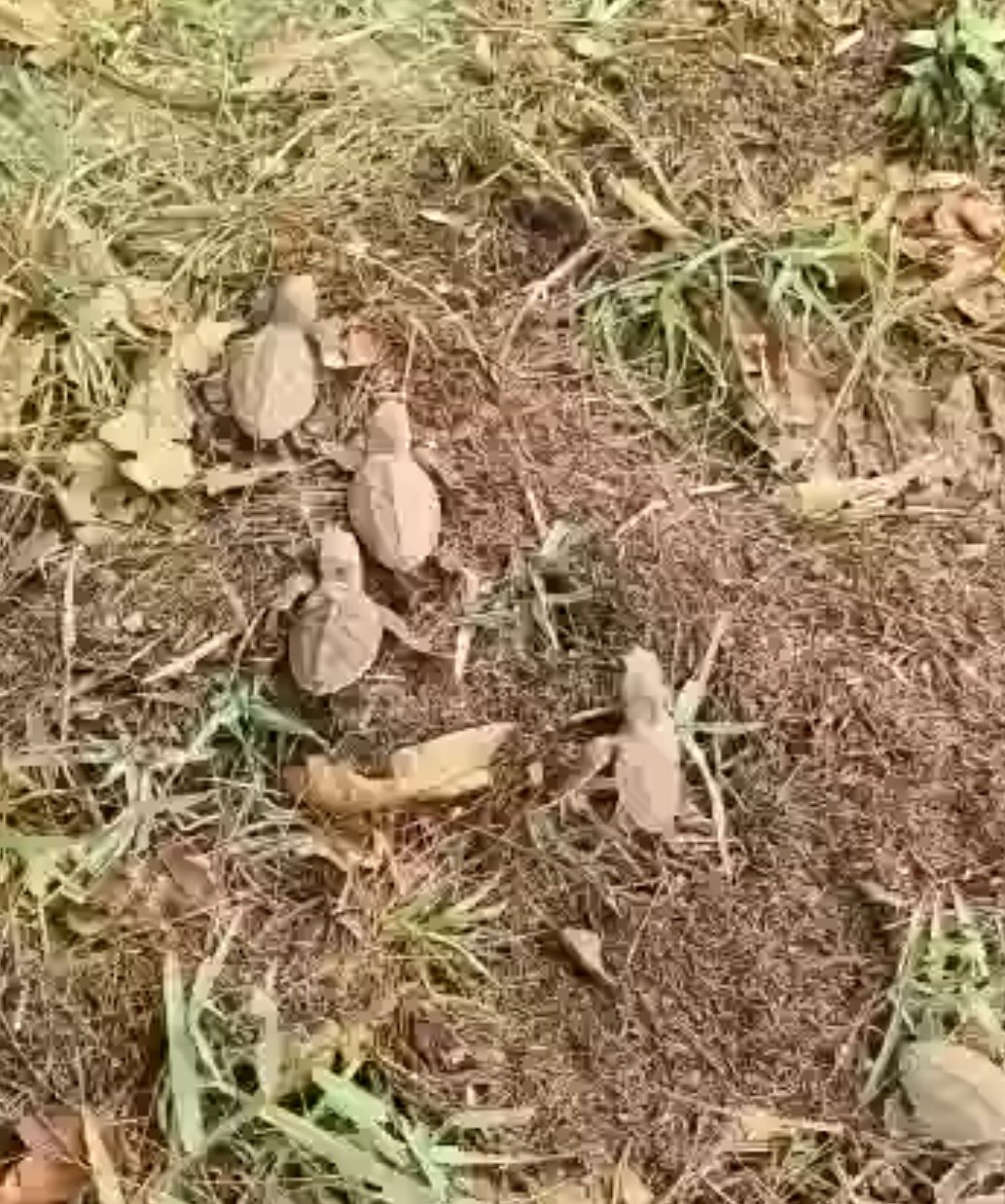 The anglers then called the National Parks Board (NParks), who sent officers down to guide the hatchlings safely into the sea.

On 18 Jun, the Marine Stewards Facebook page shared a post of an encounter with some turtle hatchlings at East Coast Park.

The group who encountered them, Power Anglerz Singapore, had apparently just completed an overnight fishing trip.

While they were walking on a grass patch at ECP, they spotted little turtle hatchlings scrambling towards the waters. Concerned for their safety, the group alerted NParks to help ensure all the hatchlings make it to the sea.

The post also mentioned that NParks had weighed, counted, and escorted the hatchlings.

NParks confirmed in a Facebook post that they were alerted to the hatching of about 100 Hawksbill Turtles at ECP on 18 Jun. 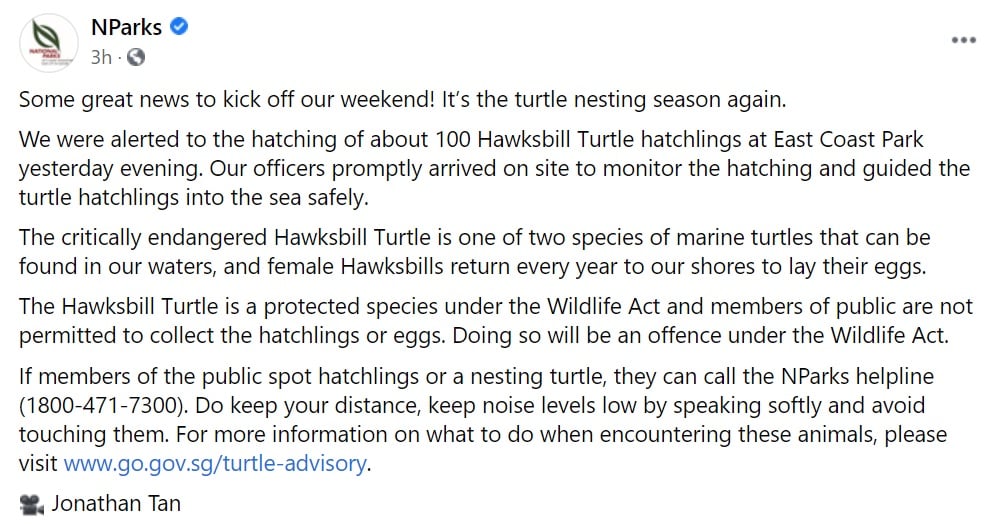 They then deployed officers to the scene to monitor the hatchlings and guide them into the sea safely. 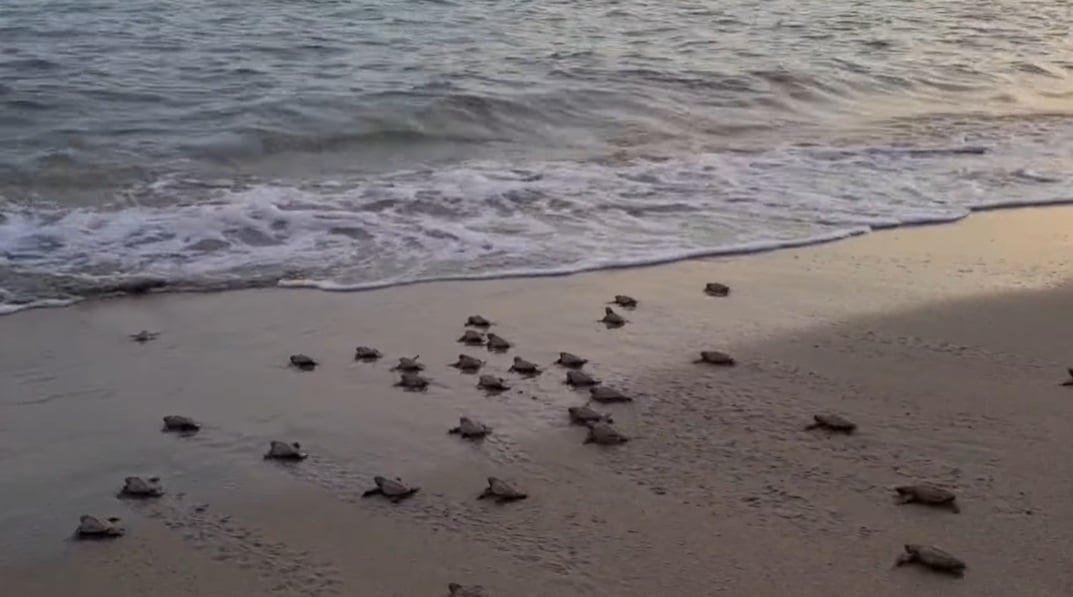 As mentioned by NParks, it’s currently turtle nesting season and the critically endangered Hawksbill Turtle is one of two species of marine turtles that can be found in Singapore waters.

They would return to our shores every year to lay their eggs.

NParks thus advises members of the public who may come across any hatching activities to maintain a distance, keep noise levels low, and avoid touching the turtles.

As the Hawksbill Turtle is a critically endangered species protected under the Wildlife Act, members of the public are not permitted to collect the eggs or hatchlings as its an offence to do so.

You can watch the video of the hatchlings entering the sea here.

Hope more Hawksbill turtles will hatch safely on our shores

If you happen to be lucky enough to encounter this beautiful sight, please heed the advice given by NParks.

Like any other wildlife sightings, maintain a distance and admire the beauty from afar. You may also want to contact the NParks helpline at 1800-471-7300 if you need any assistance.

We hope that more Hawksbill turtles will hatch on our shores safely in the future so that everyone can marvel at Mother Nature’s beautiful creations.