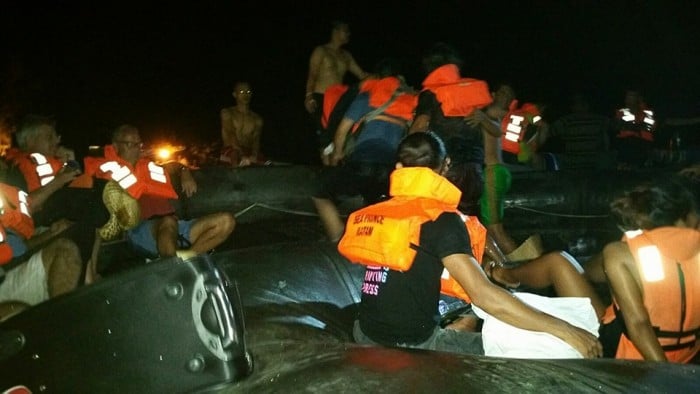 The ferry sinking was basically one cock-up after another

A traveller aboard the ferry from Singapore to Batam has posted a very lengthy post, describing her experience aboard the sunken ship.

The vessel was said to have hit a floating object on Sunday (29 Nov) night, but all 97 on board sustained no injuries and were rescued.

Details from those aboard were scant, but not anymore.

According to Facebook user Adilah Rahmat, the truth deserves to be shared.

Yes, that’s a really long post, so we’ve boiled it down to 11 observations for you.

1. The ferry was delayed

We reached Nongsapura Ferry Terminal at about 5.45 p.m. The ferry was due to depart at 6.10 p.m. By 6.00 p.m., everyone was already queuing up at the departure gate. We entered the departure gate and we were waiting to board the ferry. The personnel at the ferry terminal told us to wait. No one informed us that there was a delay. We waited until about 6.30 p.m. before all of us boarded the ferry.

2. Something (presumably coral reefs) scraped the bottom of the ferry twice

10 to 15 minutes after departure from Nongsapura Ferry Terminal, we heard a very loud sound, followed by the sound of scrapping of the bottom of the ferry. Most of the passengers were puzzled by the sound. All of us on board the ferry knew that it had hit something, presumably coral reefs as it was low tide.

The engine halted. The captain then revived the engine… and we continued to Singapore. The ferry picked up speed and eventually hit another object about 2 minutes later.

All the crew on board the ship made their way to the rear of the vessel. No one updated the passengers on anything. Two passengers, with engineering background offered their assistance when they saw that the engine room was starting to be filled up with water. Both believed that the lower compartment of the vessel was leaking.

There weren’t any instructions of how to wear the lifejackets. Most of them were not wearing it properly. One of the passengers who helped to start the pump with another passenger, went into the cabin and inspected everyone’s life jackets.

4. The ferry was equipped with a faulty water pump

I saw the two passengers as well as three other crew members trying to revive a portable transfer pump. They were trying to pump out the water from the lower compartment. By this time, the vessel was already heavy on the rear side.

They had only one transfer pump to transfer the water out from the vessel. The pump was not in a good working condition. It stopped a few times and needed time to get it back to work. They tried reviving the pump over and over again.

5. A passenger had to approach the Captain for instructions

The Captain said that there was a ship that was deployed but could not draw near to our vessel due to shallow waters. The passenger then was told by the Captain that the life rafts would be lowered down to help in the evacuation plan.

6. Crew members had no idea what the maximum capacity of life rafts are

One of the crew members told him that it was safe and it could carry at least 40 people. Later on, we were informed that it could hold 65 people.

A passenger who was already on the third raft repeatedly asked the crew members what was the maximum capacity. She was given 4 different answers. 30, 45, 55 and 65.

7. Life rafts were as reliable as the crew

The first raft was inflated and passengers allowed the elderly as well as children to be brought to safety first. Just as there were about 20 odd people on the first raft, someone realised that there was a leak in the raft.

We heard people shouting from the second raft informing us that their raft were sinking and water has started coming in.

Unfortunately, the third raft burst due to overloading capacity. The passengers on the third raft panicked because they could not feel their feet on the raft anymore.

8. Upon rescue, passengers were not fully accounted for

9. Rescued passengers were not taken care of

While this was going on, there were no updates as to where or what was the next step. No one from the authority addressed the issue to us. No one asked about our well-being.

[A] passenger then asked if there was any way we could be put up in a hotel for the night. Tini said that there weren’t any accommodation that they could offer us.

In the midst of all this, Tini had already made a decision to ferry us back to Singapore without our knowledge, let alone approval.

10. Passengers did not receive support even after reaching Singapore

Upon reaching Singapore, none of the officers and personnel knew what had really happened. There was no support rendered to the passengers. Three SCDF could be seen but none approached the passengers although they saw us in that very frail condition. No personnel came forward to account for any casualties or injuries.

11. Ferry representative was rather unconcerned

We demanded to meet the BatamFast in charge which was Mr Chua.

We talked to Mr Chua and asked him what was conveyed to him about the incident. He told us that he was updated regularly by the counterpart in Batam and that everything was “alright”. He had no idea what the passengers went through just to stay alive today. Every detail that was given to him by his counterpart in Batam did not tally with what had really happened. He was given a very simple update about the incident. He did not probe them any further about the safety of the passengers

Seems like the Batam authorities could have done more in their post-event actions. There’s probably more to this story, and we can’t wait to get to the bottom of it.

Featured image via FiveStarsAndAMoon
With reference from The Straits Times