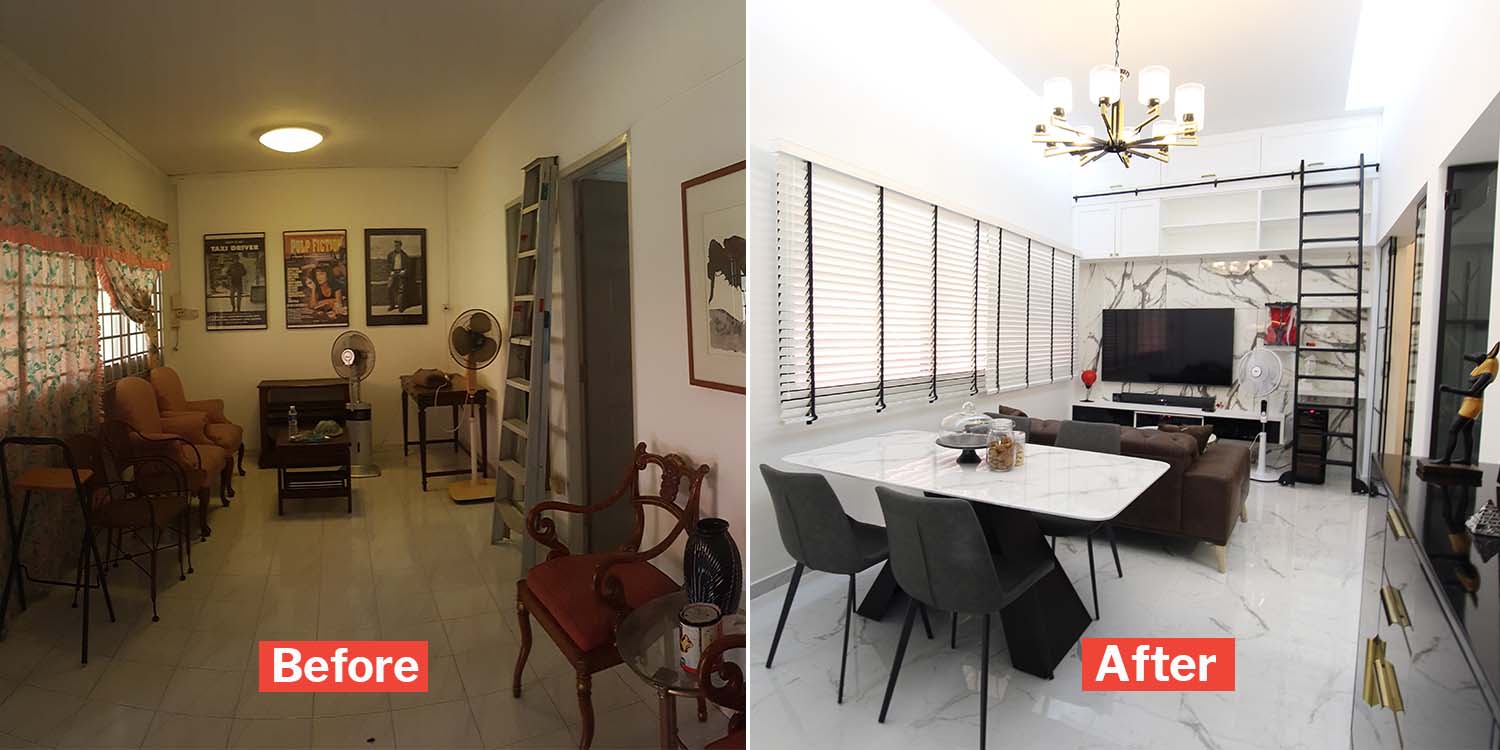 When you think resale flat, you think of a flat that is old, boring, and sometimes beyond saving. But you’ll be surprised at the difference a well-planned and well-executed renovation can make to its appearance.

One example was this resale flat in Bishan. The living room before renovation

Much of the flat is what you might expect for an aged one — white walls, white tiles and a bland layout. 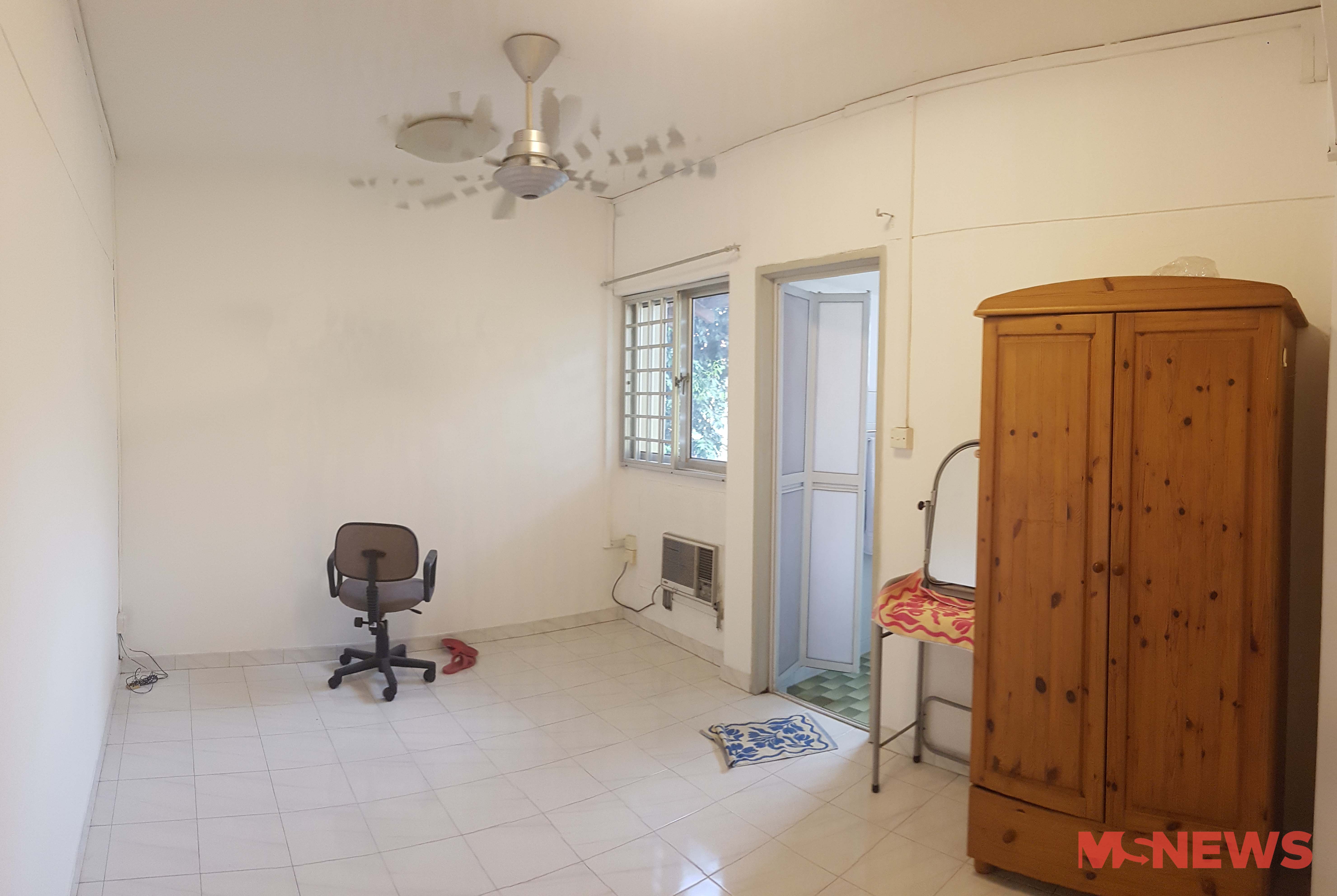 The kitchen had hardly anything to boast either — apart from its old-school facade, which may not always be a good thing. 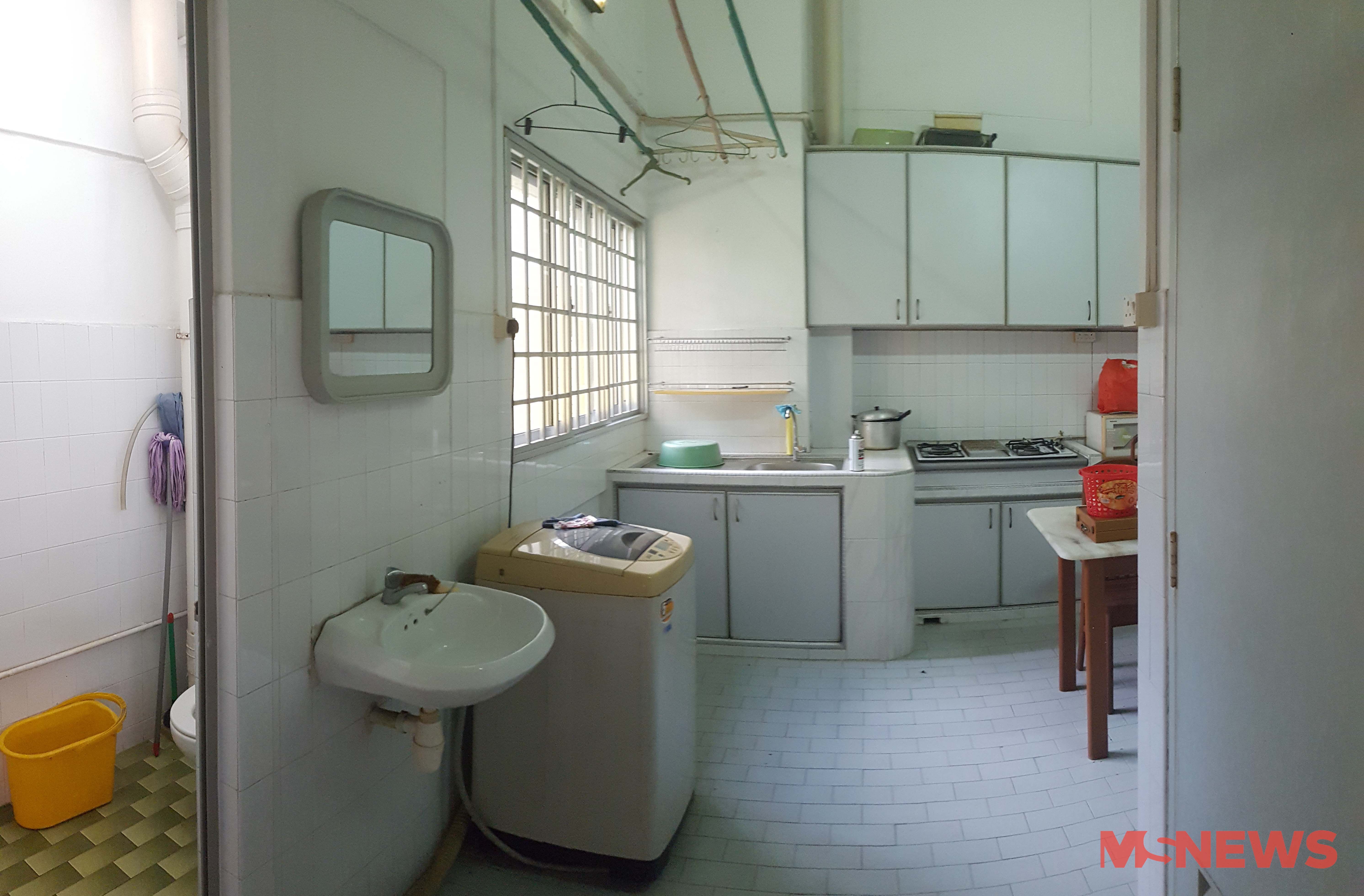 So maybe you’re thinking — why not just get a BTO flat?

For Mr Tay, that wasn’t an option. He and his wife, for personal reasons, needed a place to stay in ASAP. A BTO flat would take 2 years too long. Being familiar with the property industry, he quickly settled on this particular Bishan resale flat.

The reasons he gave for his choice were quite interesting. And they might even shed some light on how to snag good resale flat deals if you happen to be looking for one.

Next, he considered the layout of the flat. Because the unit is the middle one on the floor, it’s fairly squarish. This makes it easier to utilise the entire space within the flat.

Furthermore, the corridor outside is wider than usual — being able to fit a couch and yet still allow people to walk through. 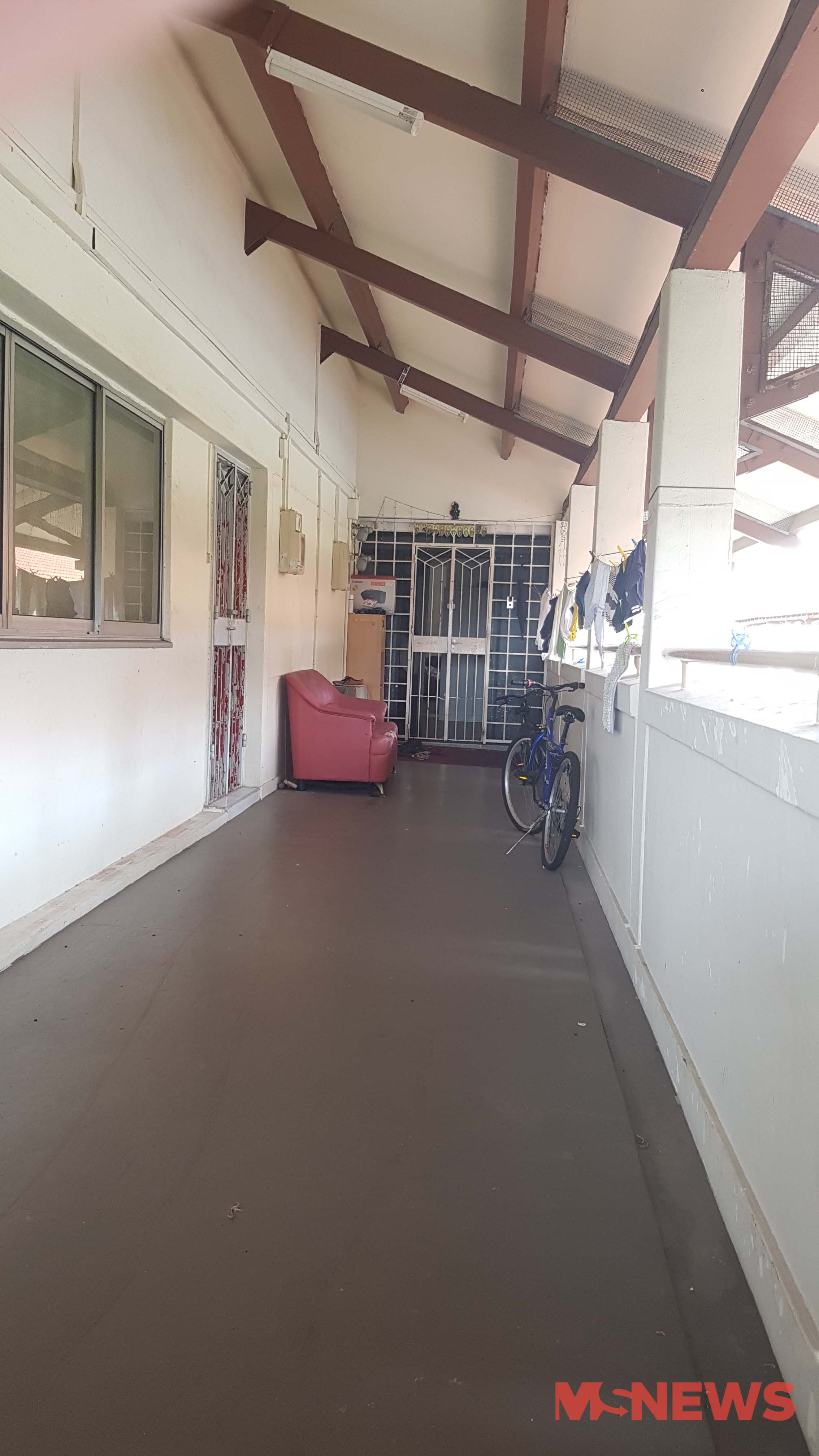 But what really attracted Mr Tay and his wife most was the fact that they could raise the ceiling height by almost two times to 4.9 metres. This is permitted because they were on the top floor.

The transformation into a marbled B&W beauty

Still more surprising, Mr Tay and his wife oversaw the entire process by themselves i.e. without an interior designer. This means handling everything from the floorplan to the design, to the coordination of various contractors.

At the end of it all, the results proved worthy of the effort. The old, rundown flat had been transformed into a modern, marbled beauty of black and white. All at a cost of $70,000 (not including fixtures).

The first thing you’ll notice is the colour scheme — disclipined assemblies of black and white. Enlivening the facade are contained bits of red, orange and gold from the various art sculptures and paintings.

The tall ceiling allowed them to hang a chandelier, further adding to the elegance of the space. The master bedroom, while not the largest, was fitted with a mirrored wardrobe to augment to the sense of space. Again, the tall ceiling meant that the wardrobe could be built to a height of 3m. 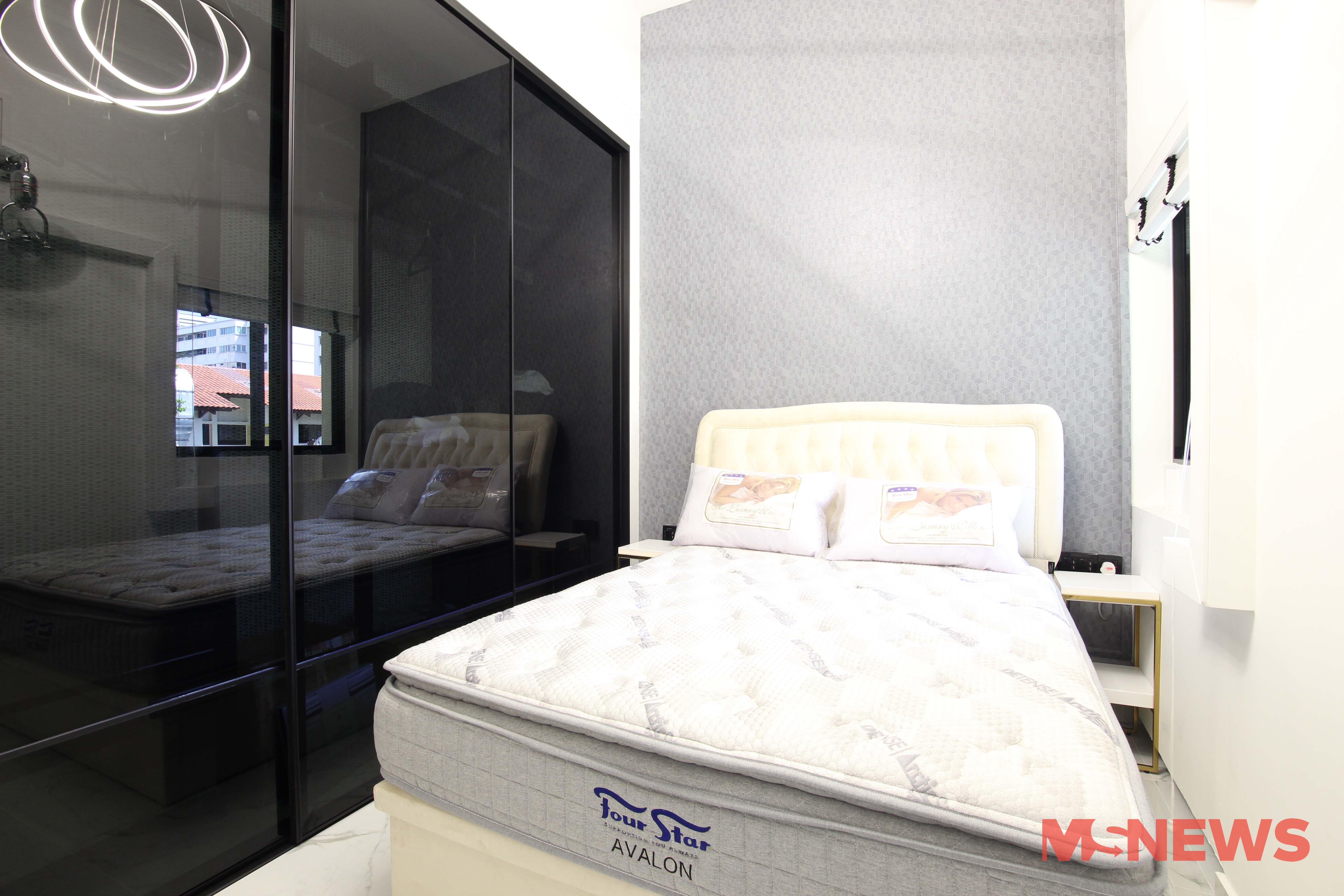 The other, smaller bedroom was turned into an office/gym space. Space is utilised properly and the furniture is black with a Midas touch of gold. The kitchen, too, was modernised — black and white cabinets, textured grey-tiled floor, metal wirings around the lights. The tall ceiling once again proved useful, allowing the couple to install an overhead clothes drying system without it being too disruptive to the space. 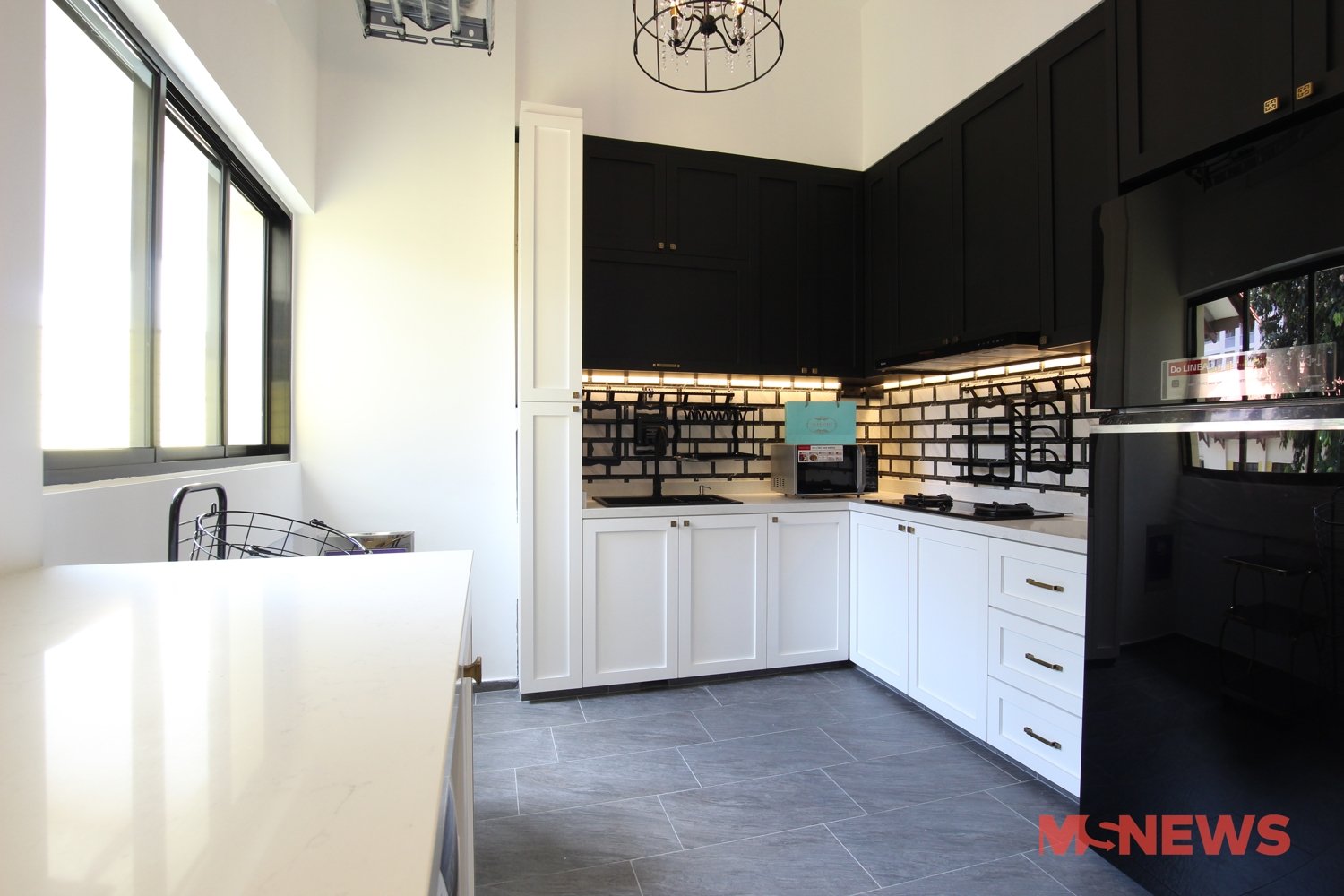 Finally, the toilet. It may appear to some as being larger than those usually found in HDB flats. No, it is not a trick of the convex lens of a camera. Mr Tay had knocked down the walls between the two toilets and combined them into a larger, lavish one. 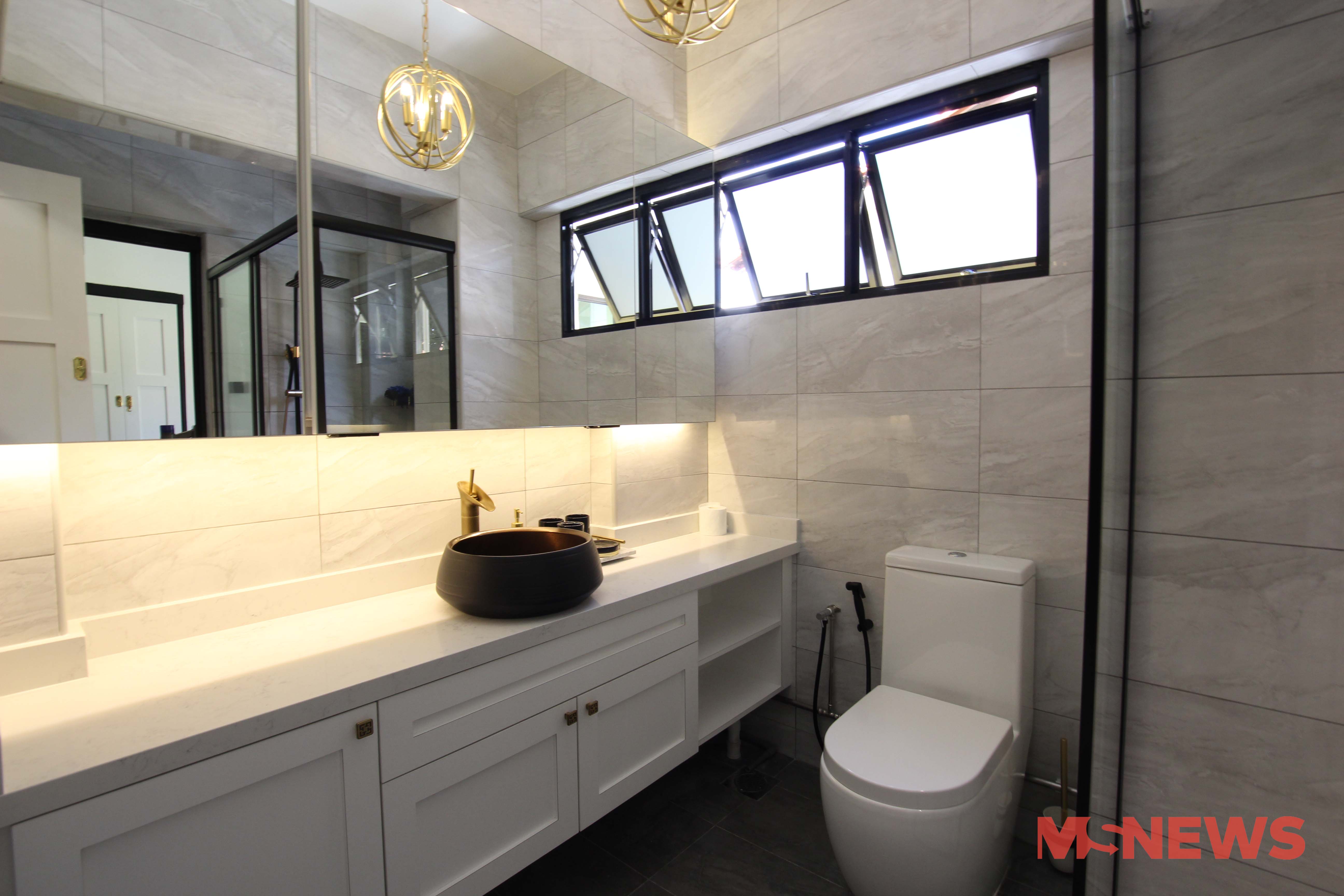 Resale flats work if you know what you want

Everyone wants a shiny new flat, not an old resale one. But Mr Tay’s abode proves one thing — that resale flats aren’t as bad as some people may think. In fact, they may be an even better deal than BTO flats.

Besides, if you’re set on renovating your flat, there’s little difference between a resale and a BTO flat.

In fact, some resale flats, as Mr Tay pointed out, are undervalued for their size and location. You just have to sniff them out and come up with a renovation game plan.

All images were provided to MS News by the home owner.