Must Share News – Independent News For Singaporeans
Home People Social Issues Body Shaming Is Now A Crime In M’sia, So Calling Someone Fat... 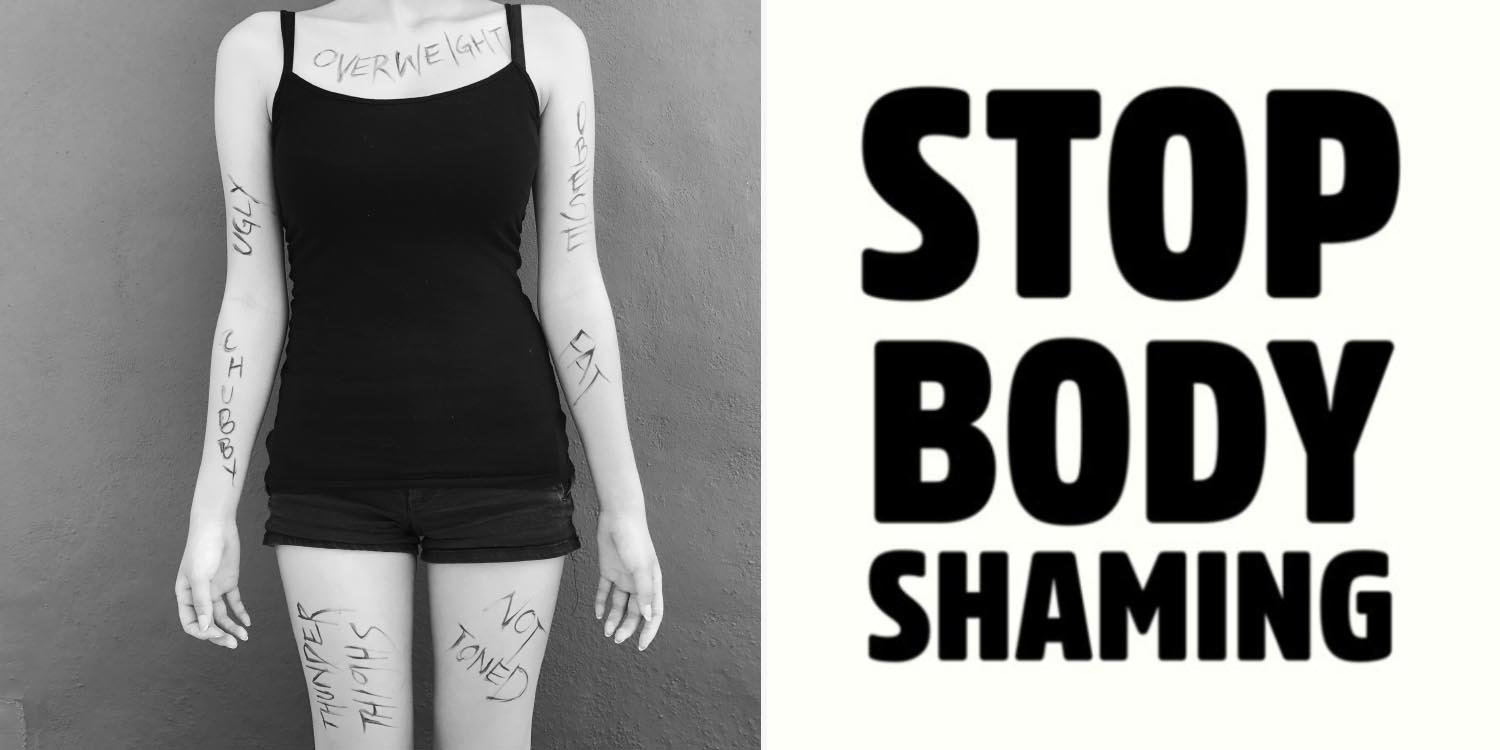 Malaysia Officially Criminalises Body Shaming, Offenders Could Be Fined S$16,000 Or Jailed, Or Both

Once you’ve been online long enough, you’ll know that the Internet can be a cruel place — no thanks to keyboard warriors.

Dealing with their scathing remarks can be hard, especially when the attacks are made personal, such as body shaming. 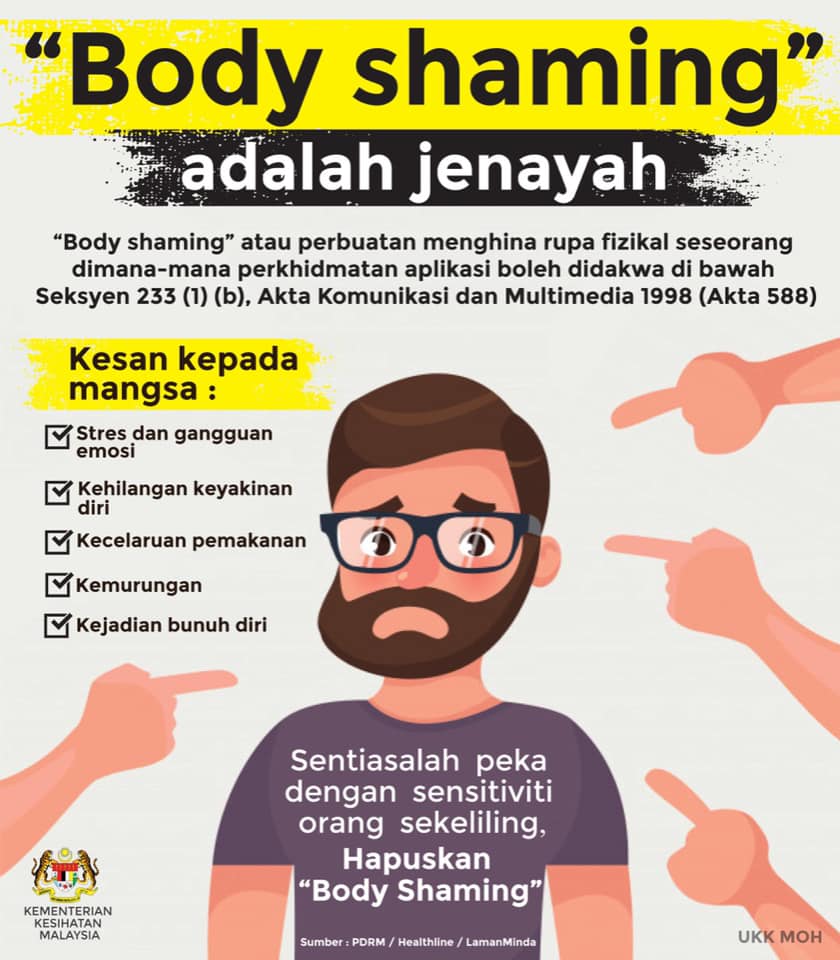 If cyberbullies are found guilty, they could be fined S$16,000 (RM50,000), jailed up to a year, or both. Malaysian officials mean business, everyone.

Body shaming officially a crime in Malaysia from 16 Oct

Malaysia’s Health Ministry released an infographic poster on Wednesday (16 Oct), announcing that body shaming is a form of cyberbullying. 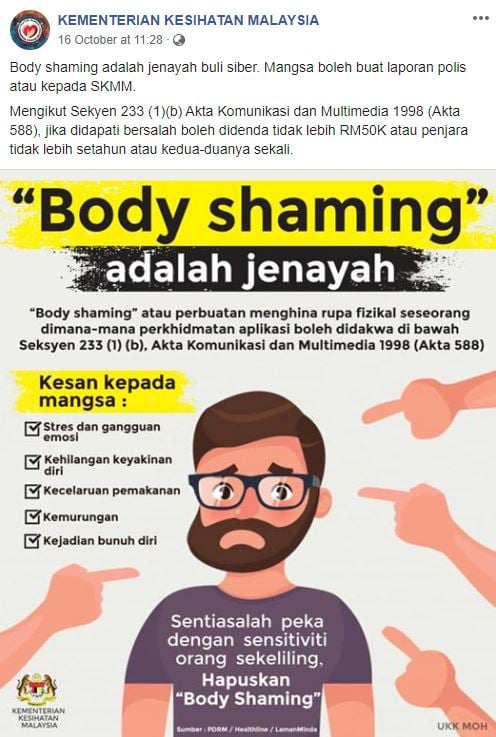 Victims can lodge a report with the police or Malaysian Communications and Multimedia Commission (SKMM).

The ministry further detailed that this act of cyberbullying leaves negative effects on the victims, such as:

They end the poster with a call to action for Malaysians,

Always be aware of the sensitivities of people in your surroundings. Put an end to body shaming.

Offenders to be fined, jailed, or both

Those who are found guilty of body shaming, or committing actions that mock a person’s physical features on any social media platform, will be charged.

If you’re proficient in Malay, you can visit this Twitter thread to find out what Malaysians have to say about this. 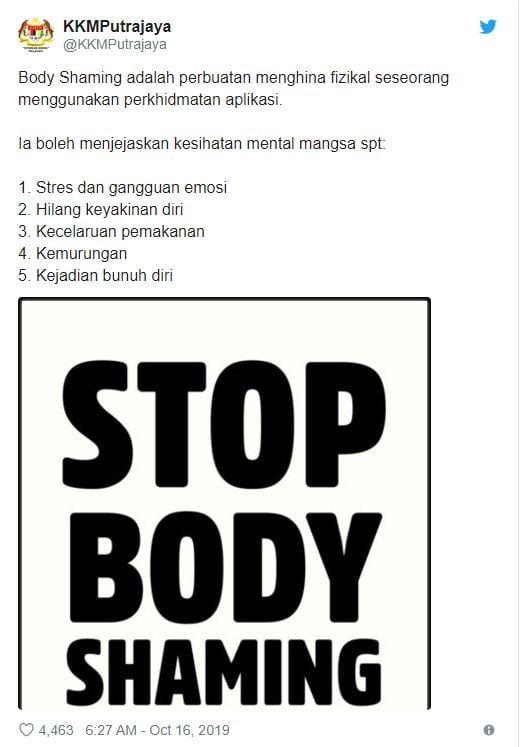 Even though body shaming is criminalised in Malaysia, we laud the Malaysian health authorities for taking a step towards the right direction.

Mental health continues to be a trending topic in Singapore, what with PSLE exams drawing flak from parents for being “too difficult”.

Education Minister Ong Ye Kung has also said one of the reasons mental health issues continue to plague our young, is social media.

Do you think Singaporean authorities should follow in Malaysia’s footsteps? Let us know in the comments below.