The busker learned the song so he could play it for her.

It is adorable to watch children dance along to songs, but there is perhaps no song that haunts parents like ‘Baby Shark‘ played on loop.

There’s something about its catchy lyrics and upbeat tune that appeals to the young ones — and the same goes for three-year-old Evee, aka Baby Eve.

I did tell her he probably won’t do it, but she made me wait until he’s done with his song just so she could ask herself 😅

Unfortunately, the busker, Jason Yu, reluctantly turned her down as he did not know the song’s chords.

But a few weeks later, Evee and her mum visited Jason along Orchard Road once again. This time, Jason readily accepted her request, and Evee danced along in happiness.

On Monday (9 May), Evee’s mum shared a TikTok video of the three-year-old asking busker Jason Yu to play ‘Baby Shark’ for her.

Jason, who was busking outside Wisma Atria, seemed stunned by her request.

He even looked back at Evee’s mum to clarify that he heard her right.

When her mum seemed to have acknowledged that he heard right, Jason then sheepishly smiled and said he didn’t know how to play it.

But the story did not end there. Soon after, the TikTok video went viral, garnering over 1.5 million views at the time of writing.

Many netizens admired how Evee had courageously and adorably made the song request despite her age.

Some also praised Jason for listening to her patiently.

One netizen even said that he certainly would have played ‘Baby Shark’ for the toddler had he known how to.

Another commenter jokingly tagged Jason in the comments, demanding that he learn the song now.

Soon after, Jason replied to the comment with his TikTok video.

Reply to @celcorn let me explain myself 🥺

After the conversation with Evee, he explained that he had looked up the chords for ‘Baby Shark’ and realised it was “quite easy”.

But by then, the mother and daughter duo were nowhere in sight. He felt like it was a “wasted opportunity”.

Jason then gave a shoutout to Baby Eve as well as her mother. He said that if they were ever at Orchard Road again, he would love to play the song for them.

And it seems Evee and her mother took Jason up on his offer.

Another TikTok video uploaded by her mother on Monday (16 May) showed Evee once again approaching Jason to request for ‘Baby Shark’. 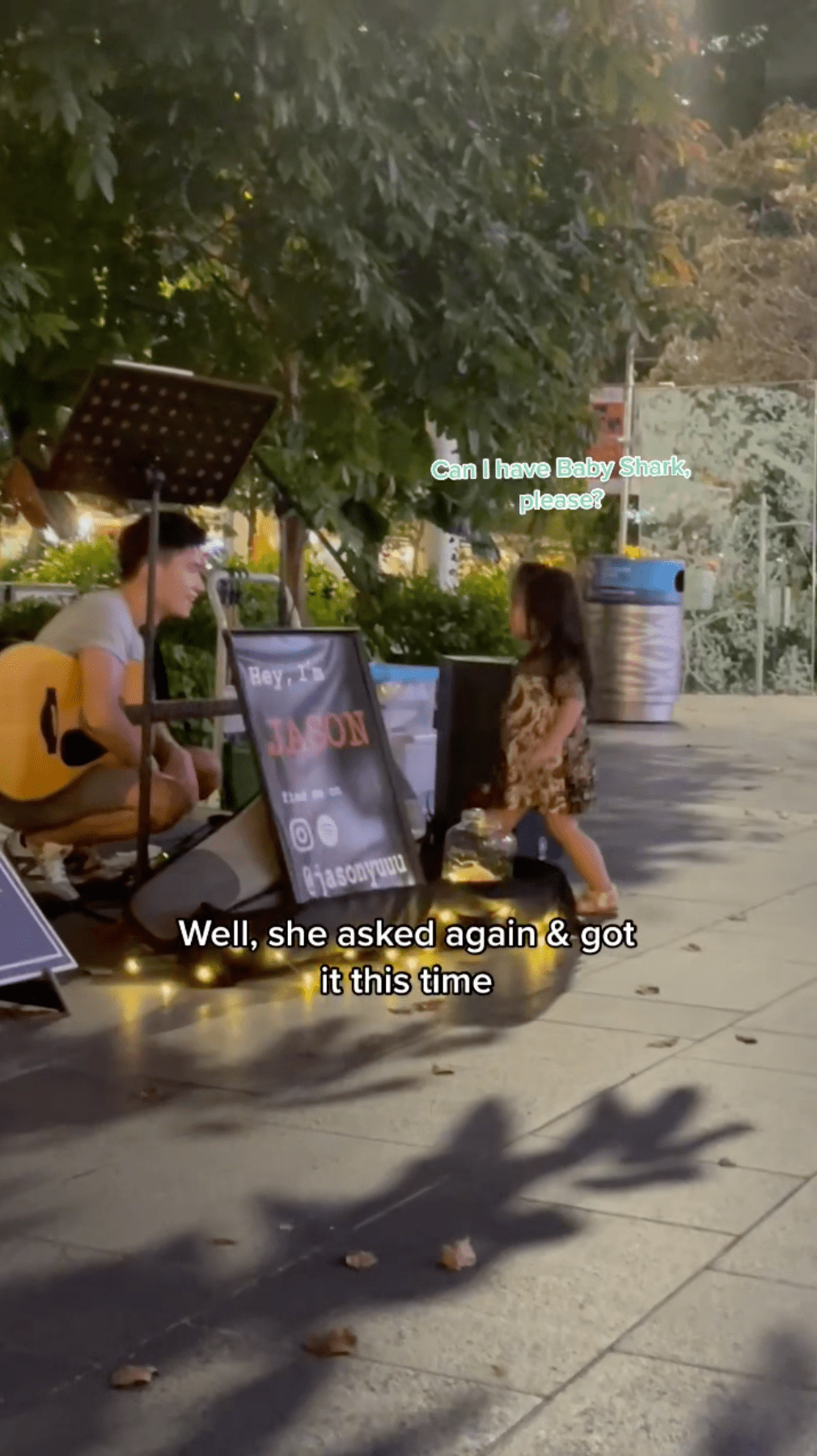 This time, Jason was ready to grant her request.

The video then cuts to snippets of Evee jumping around and dancing with joy as Jason played and sang ‘Baby Shark’ in the background.

Evee was so excited she couldn’t stand or sit still throughout the song, a smile etched across her face.

As if that wasn’t enough to melt everyone’s hearts, Evee gave him a big hug to thank him when Jason finished playing the song. 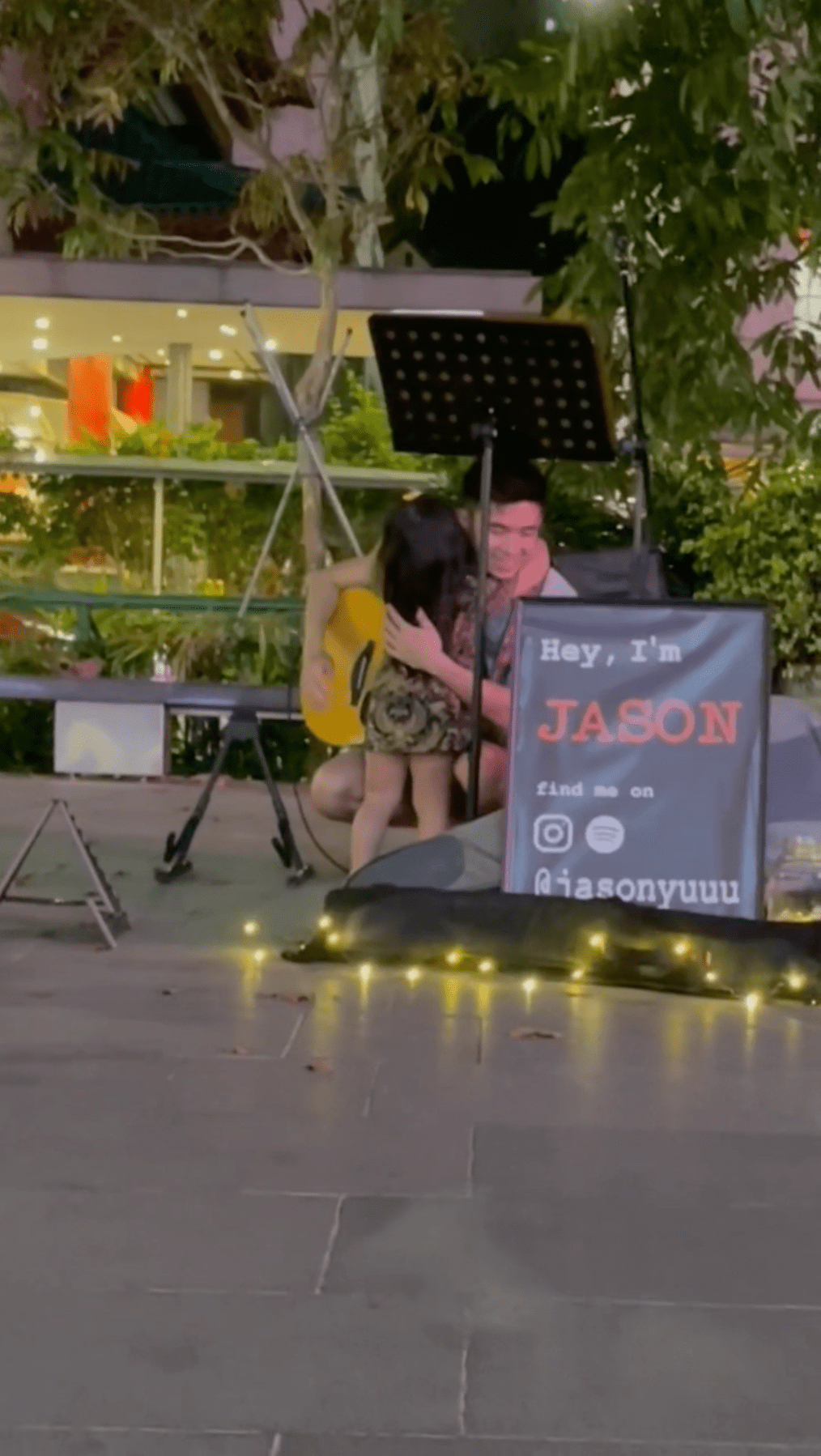 It all started as a casual song request by an innocent ‘Baby Shark’-loving toddler.

But thanks to TikTok, Jason eventually managed to fulfil Evee’s song request.

And perhaps more importantly, everyone got to see the adorable smile on Evee’s face as she danced along to her favourite song.

Featured image adapted from workingwithmonolids on TikTok and TikTok.