The Government's top priority was for him to face justice.

A sensational robbery of a Standard Chartered (StanChart) bank in 2016 ended with the robber, Canadian David James Roach, sentenced to 5 years’ jail and 6 cane strokes.

However, as part of the agreement with the United Kingdom to extradite him to Singapore, Roach will not be caned.

President Halimah Yacob has remitted the caning sentence, meaning Singapore will not carry out the caning.

He’ll not receive any alternative punishment, the Ministry of Home Affairs (MHA) said on 25 Jul.

Singapore will not carry out StanChart Robber cane sentence

MHA said in a statement on 25 Jul that Roach, who made away with over $30,000 from a StanChart bank in 2016 and fled to Thailand, will not carry out the cane sentence it imposed. 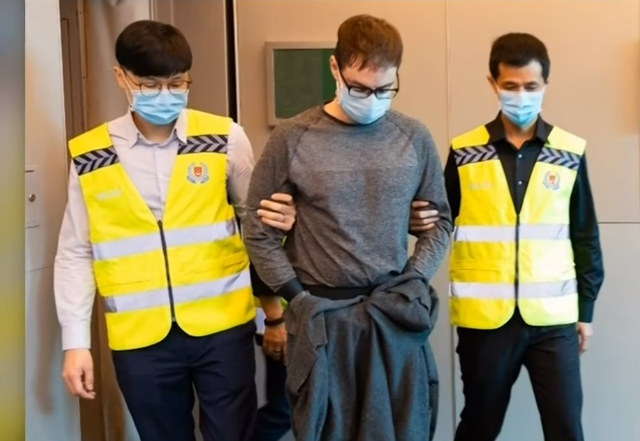 This is due to the extradition agreement that Singapore made with the UK, which would only extradite him if there was no corporal punishment.

The UK abolished corporal punishment for offences in 1948 and the last prison caning was in 1962.

Mdm Halimah had remitted the sentence on the advice of the Cabinet.

MHA said that without the agreement, the UK would not have sent Roach to Singapore.

Thailand doesn’t have an extradition treaty with Singapore and so was deported and arrived in London on 11 January 2018.

He eventually arrived here on 17 March 2020, 4 years after he first fled Singapore for Thailand.

He was charged with 1 count of bank robbery and 1 count of money laundering.

Top priority was for robber to face justice

MHA said that the Government’s top priority was to have Roach face justice for his crimes.

Hence, it agreed to the extradition’s condition.

MHA further noted that the Government will do whatever is necessary and permissible to seek justice against those who commit crimes in Singapore.

This is regardless of their nationality or where they may have fled to.

Certainly, while Singapore was unable to get Thailand to send Roach here, we managed to intercept him in a country that does have an extradition treaty with us.

It’s been a long process, but he will finally face justice for the crimes he committed here.

Even though Roach will not be caned, the jail sentence remains.