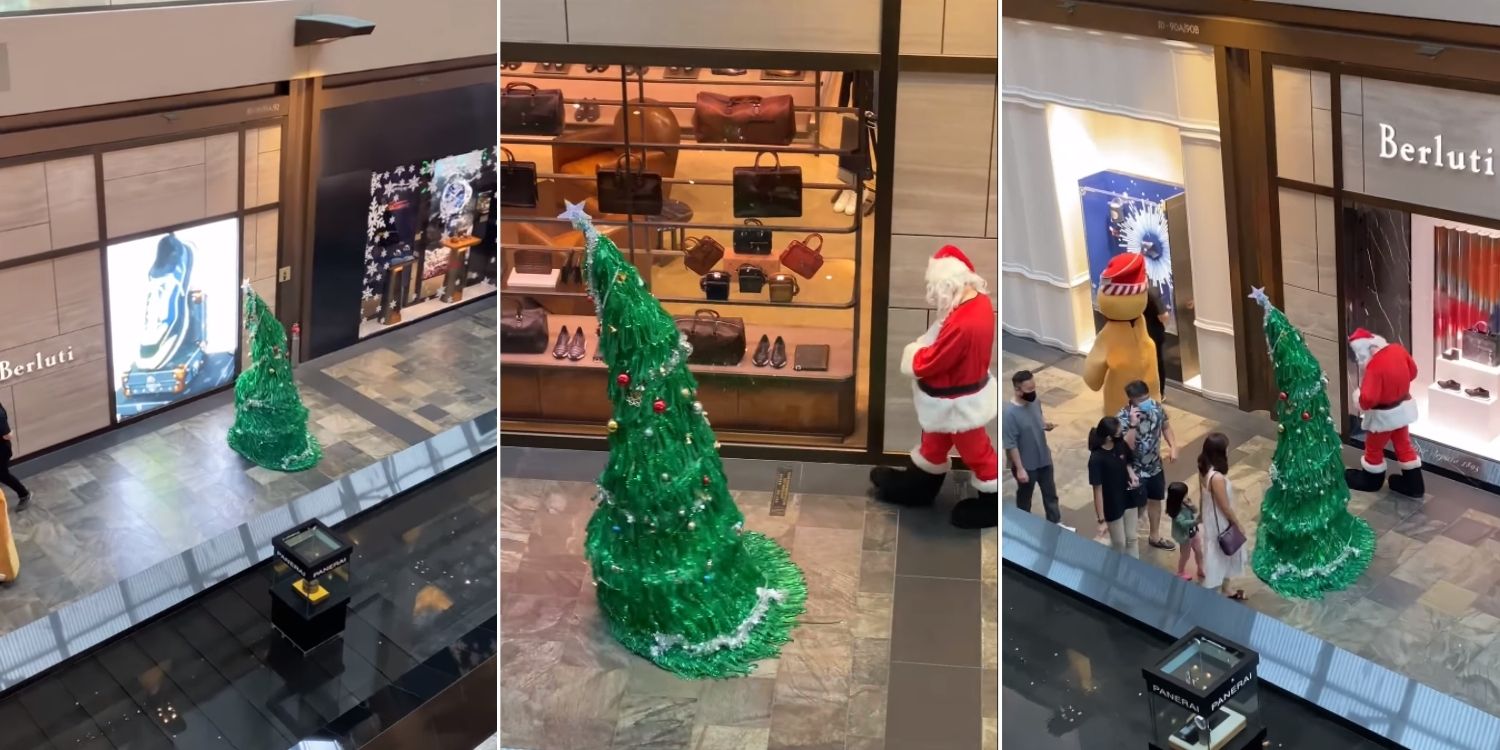 Person In Christmas Tree Costume Scurries Across The Shoppes At MBS

Christmas decorations at malls tend to either be cute or pretty, but The Shoppes at Marina Bay Sands (MBS) seems to have taken a different approach altogether.

Though not exactly décor per se, a particular Christmas tree there recently gained quite a lot of attention.

So much attention that a video clip of it garnered over 12,000 shares in less than a day.

Facebook user Justin was at The Shoppes at MBS yesterday (5 Dec) when he observed the most unusual sight.

What appeared to be a lopsided Christmas tree seemed to be making its way across several stores on Basement 1.

If you’re thinking, “Wait, aren’t Christmas trees supposed to be stationary?” You’re not wrong. As far as we can recall, they do usually stay in one spot and make a space look pretty.

But this one seemed to have grown legs instead of a trunk and started strolling past shops at the mall like the rest of us hoomans.

With the star on top pointing forward like a majestic unicorn’s horn, the tree sashayed ahead, its glittery ‘leaves’ swishing across the floor.

Part of a crew of other Christmas characters

At one point, the tree picked up its pace, as it approached a masked Santa waiting nearby.

As the adorable duo fell into step, the clip reveals a lady and a life-sized gingerbread man waiting further ahead.

The scene almost looks like the start to a popular joke — a gingerbread man, a Christmas tree and Santa walked into a bar…

Clearly part of a Christmas event at the mall, the costumed trio drew curious stares from passersby, including a family with a young child.

As they paused to look, the polite tree even offered a little curtsy as a way of saying “hello” to the little girl.

The peculiar encounter didn’t seem to faze the young girl who walked on with her family, as though a curtsying Christmas tree was a normal character to meet.

Whoever’s inside the costume, literally hustling to spread the festive cheer around, kudos to you for making our day with this hilarious scene.

We’re sure shoppers who witnessed the walking tree were amused too.

If you’d like to try your luck at spotting the walking Christmas tree, perhaps you should head over to The Shoppes soon, while the festive period is still ongoing.

Make sure to snap some photos and videos, because this is certainly something worth looking back at and laughing about.