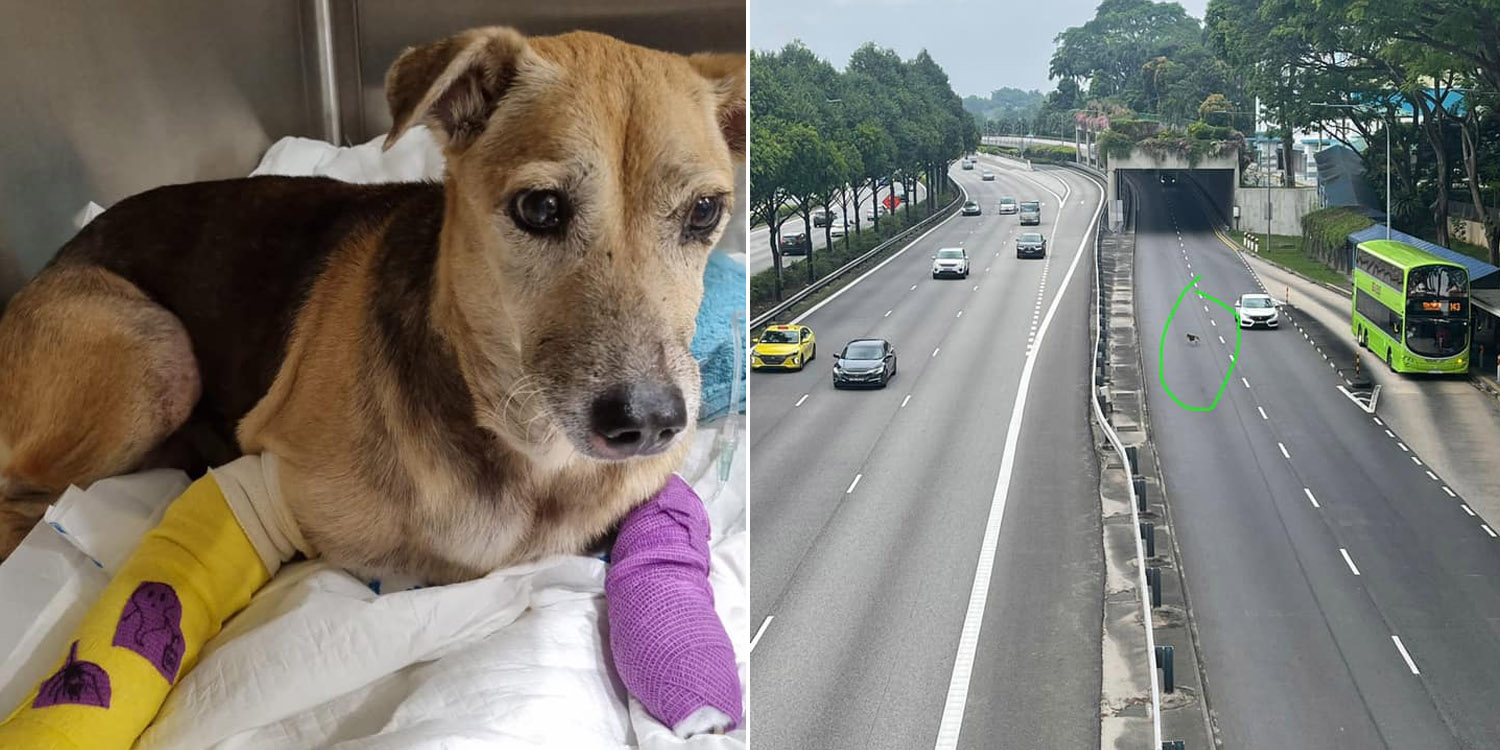 She fractured her front right leg.

Securing an animal in order to provide it with help later is no easy feat, as many rescuers would probably attest to.

On Sunday (10 Oct), folks from Chained Dog Awareness in Singapore (CDAS) were attempting to get one of their rescued dogs into a car when she struggled out of her collar. Though they managed to find her later that day, the dog reportedly suffered a fracture. 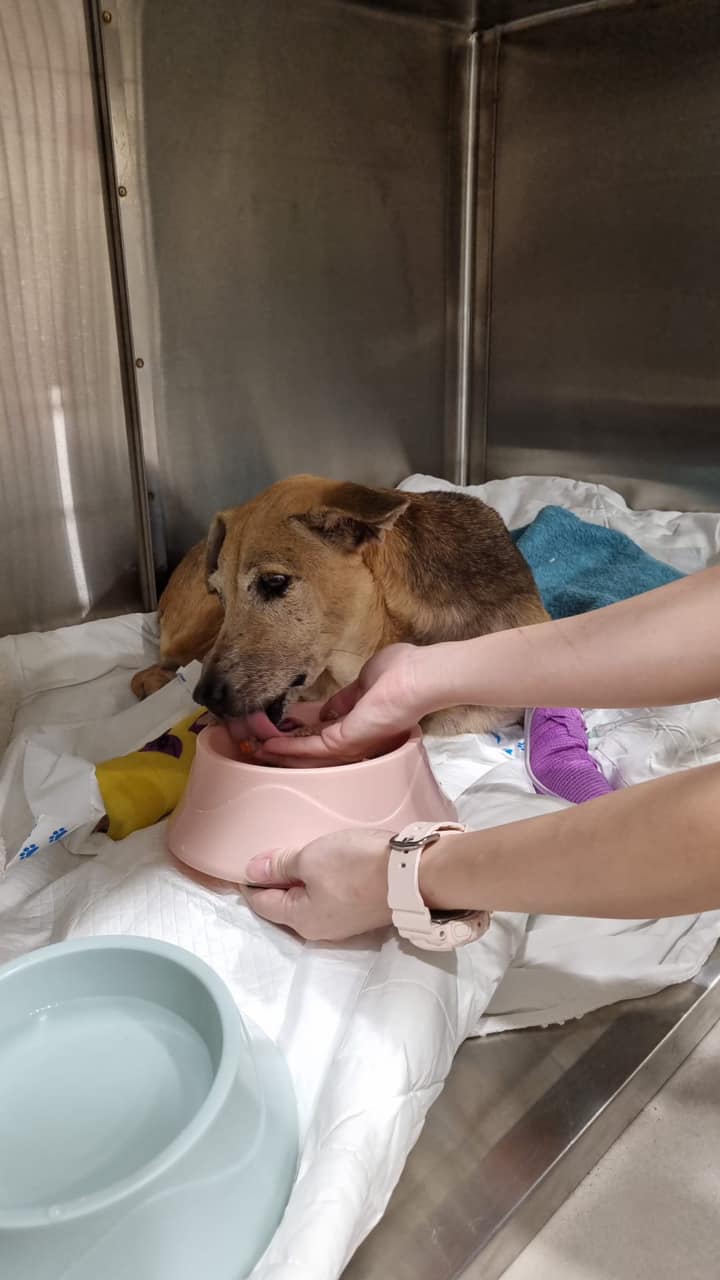 CDAS then took to Facebook to appeal for donations to fund her medical fees. In a matter of hours, they closed the appeal, likely after raising sufficient money.

Dog found near expressway after escaping on 10 Oct

On Sunday (10 Oct), folks from CDAS were attempting to get a female dog named Tiny into a vehicle when she escaped from her collar.

Upon escaping, Tiny reportedly ran towards the section of the Pan-Island Expressway (PIE) near Toa Payoh Lorong 1. Described as being “quite skittish”, Tiny was later pictured crossing the busy expressway before appearing at a section of Kallang River next to the PIE. 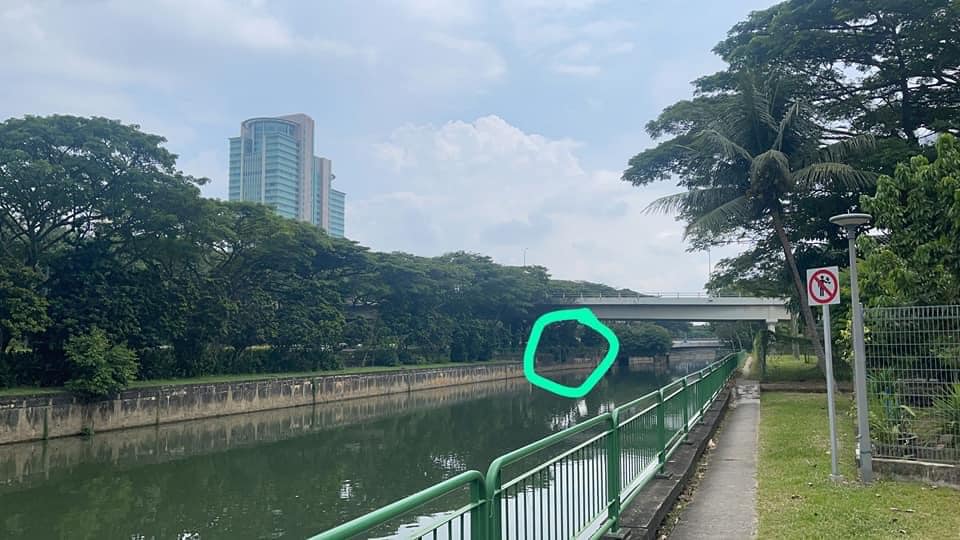 Some 4 hours after escaping, CDAS folks received a call from SPCA informing them that Tiny was found lying at the divider along an expressway.

As it was raining at the time, Tiny’s body was reportedly drenched when rescuers found her. Ants were also crawling all over her face. 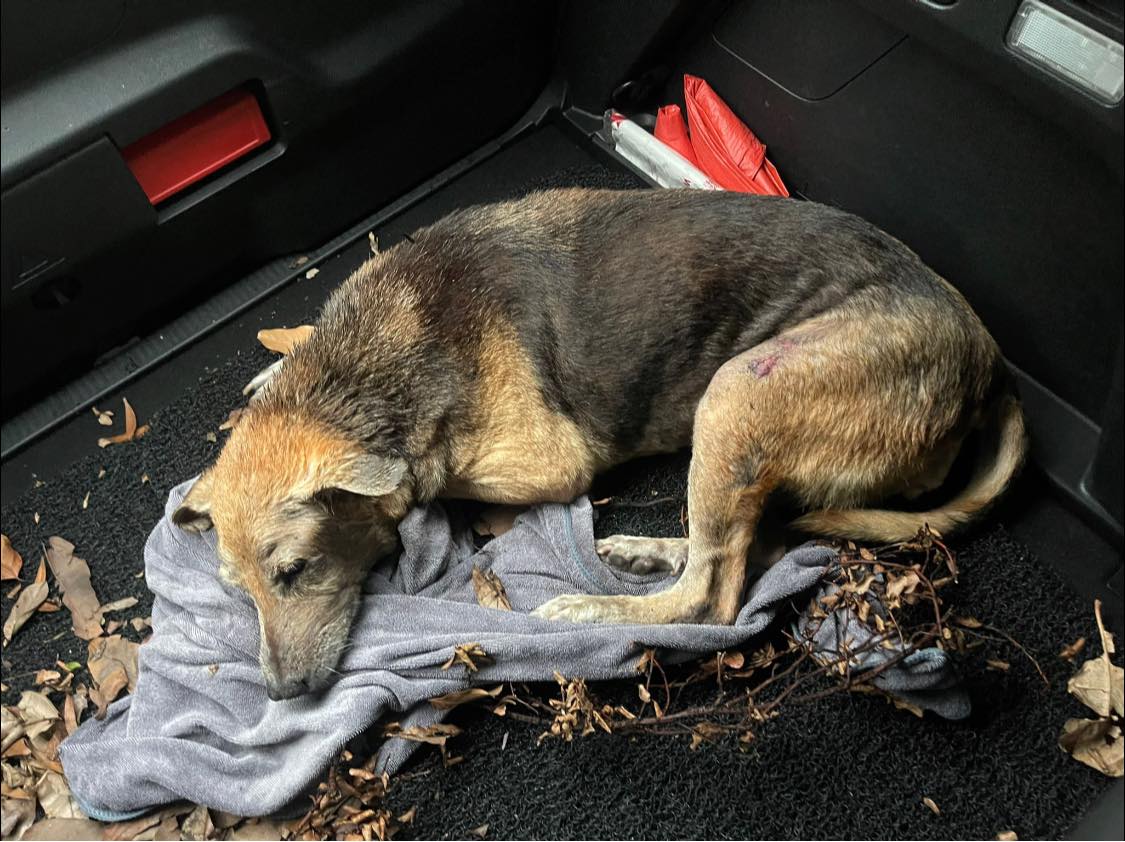 Seeing the predicament that she was in, folks from CDAS immediately conveyed her to a vet at Bukit Timah.

There, she underwent an X-ray that revealed a fracture on her leg.

However, Tiny was in no condition to undergo an operation apparently due to her low platelet count. 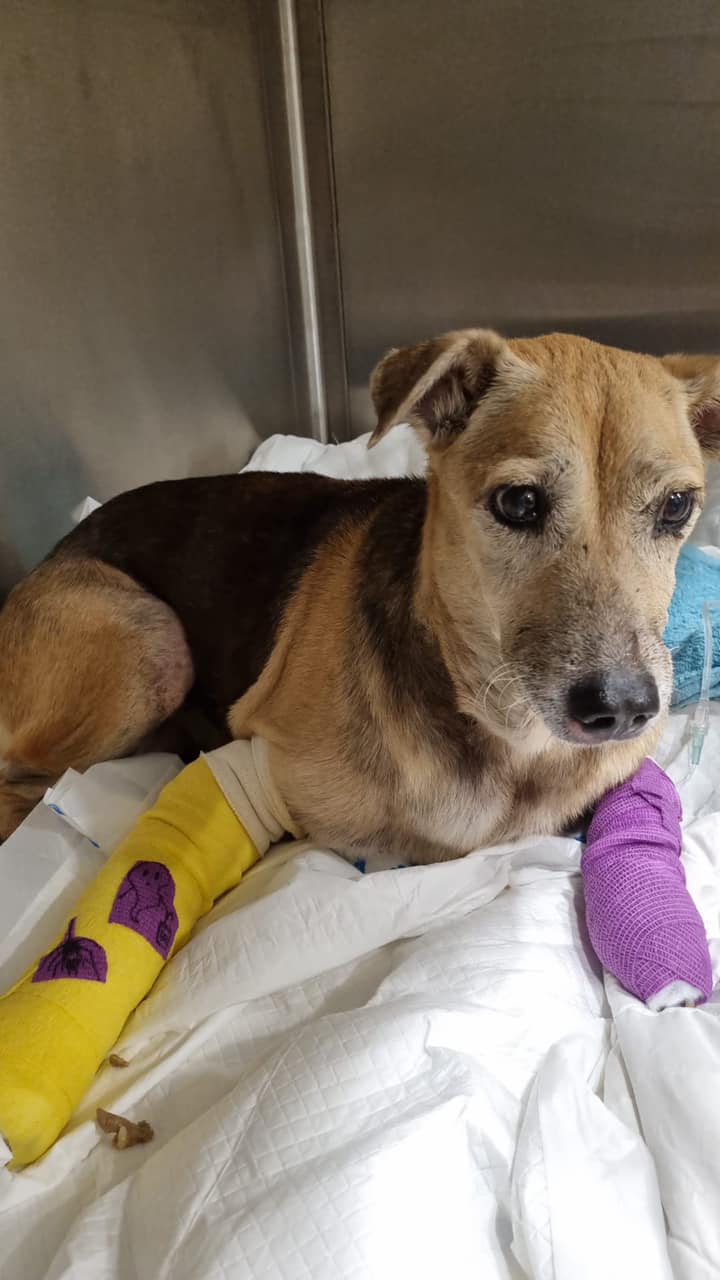 Nonetheless, Tiny has racked up a considerably hefty medical bill amounting to $6,705.97.

In order to pay off the medical expenses, CDAS appealed to the public for donations.

Within hours, however, they updated the post to close the appeal, suggesting that they had raised enough funds to cover Tiny’s bills. 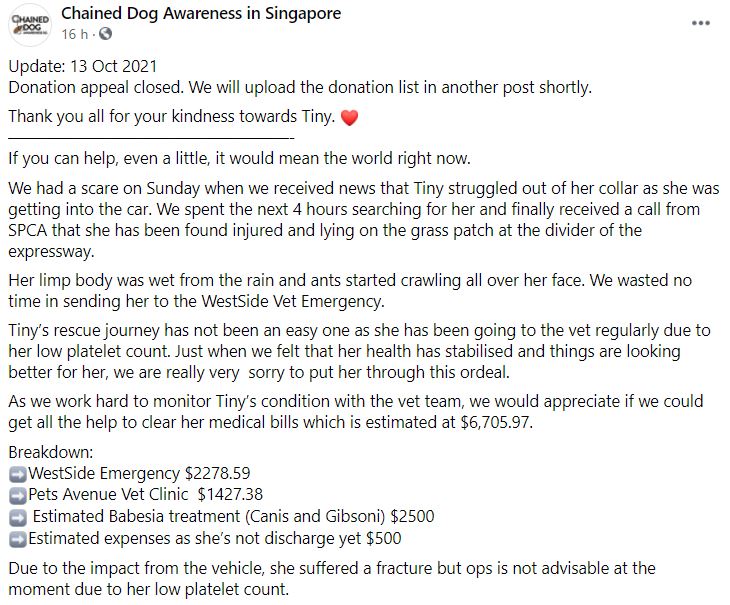 Perpetually kept in small cages prior to rescue

Earlier in May, CDAS folks rescued Tiny and 6 other dogs after finding them confined to small cages covered with cobwebs. 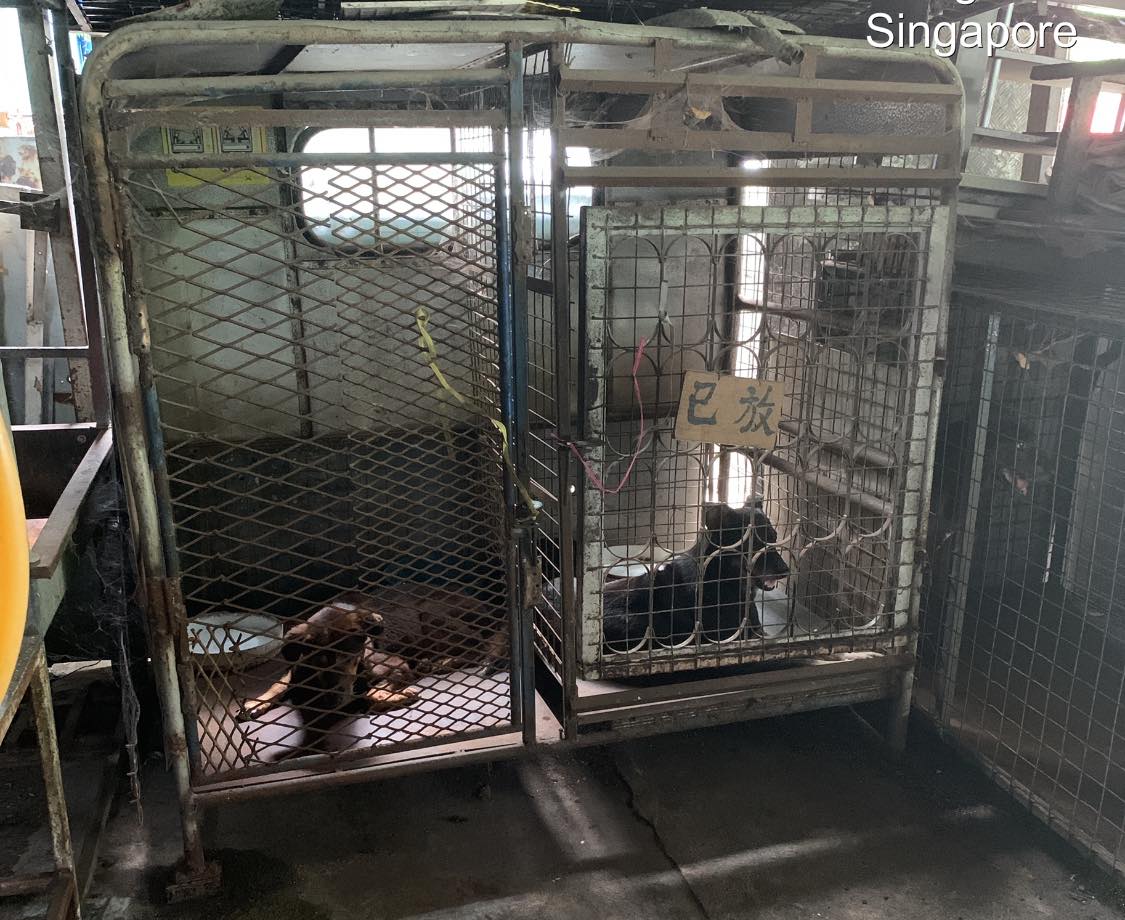 Tiny’s situation, however, has been especially worrying, as she was extremely sick and had to be hospitalised twice within the 2 months following her rescue. This was reportedly due to her low levels of red blood cells and platelets.

Despite her past and medical condition, Tiny was described as being sweet, considerate, and independent. 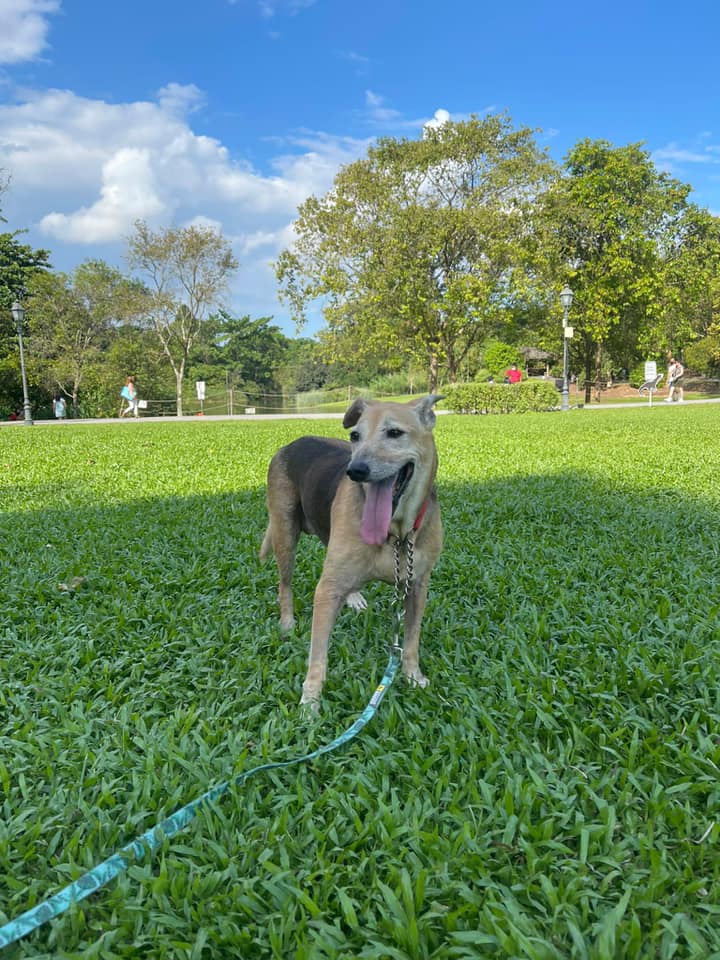 CDAS had posted an appeal to seek a suitable adopter for the adorable furkid.

It’s painful to learn about Tiny’s current situation, especially considering her difficult past.

We hope Tiny will get the treatment she needs to recover smoothly so that she can find her forever home soon and live a happy life.