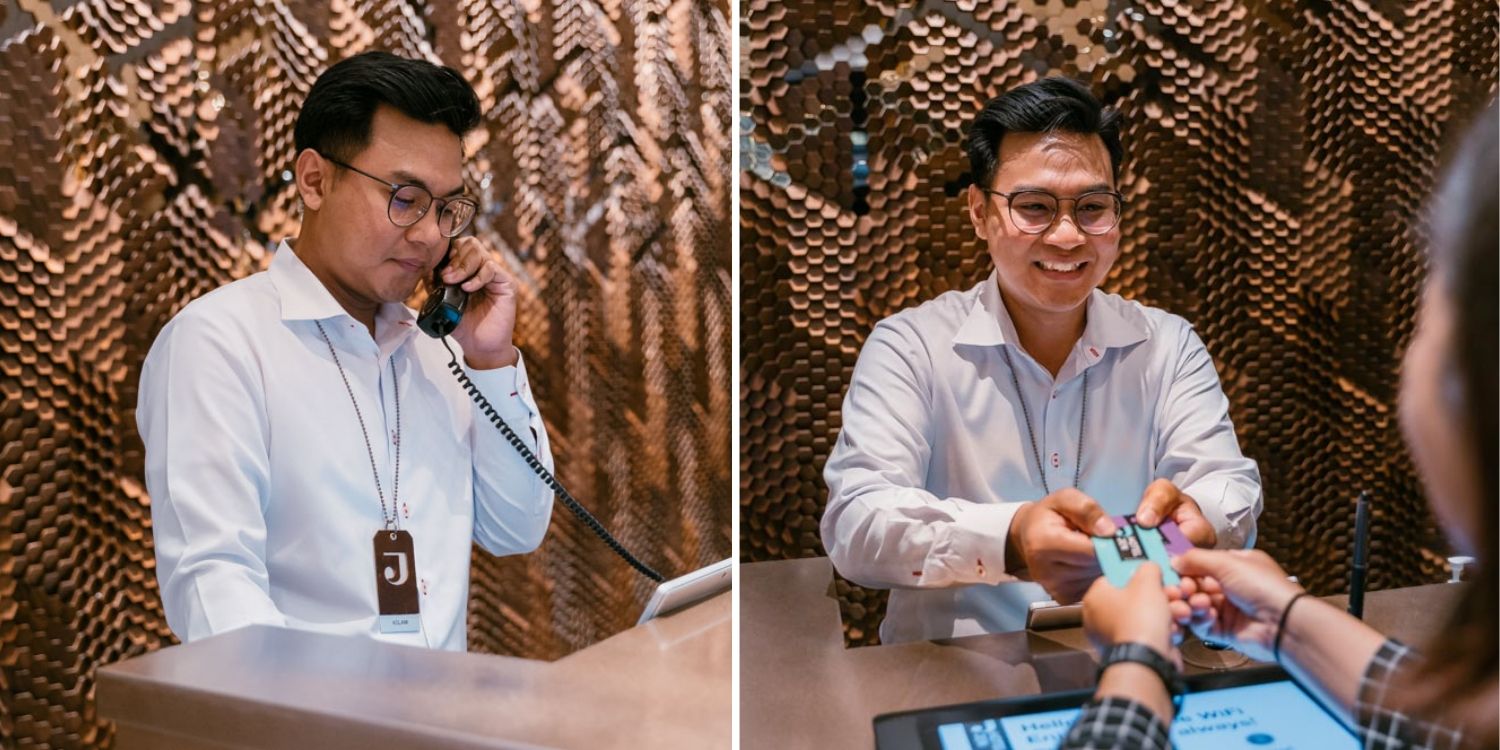 Attending to guests’ requests is part and parcel of a front desk hotel job, but Mr Muhammad Noor Aslam Bin Ghani has had to entertain some really unusual ones. 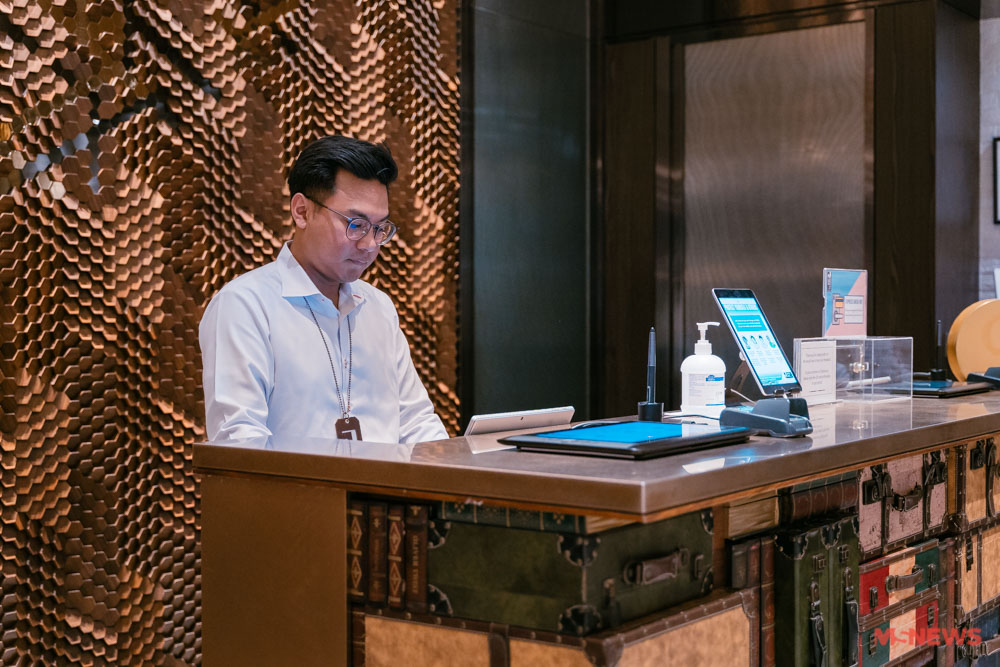 Springing a ‘birthday surprise’ from a guest to herself, and throwing a lavish housewarming party for some high rollers were just some of the surprising things the 27-year-old has had to do since his 7-year career.

Despite the unexpected situations, he continued to do his best, even going beyond his call of duty to cater to his guests’ needs.

Accommodating to customers without complaint while maintaining a sense of humour is what makes Mr Aslam a standout employee at Hotel Jen Tanglin Singapore by Shangri-La.

His outstanding service, which garnered him several noteworthy accolades on TripAdvisor, is very deserving of recognition.

Attends to unusual requests with patience

An unusual request from a guest on her birthday is something that has stayed with Mr Aslam for a long time.

The seemingly middle-aged lady had handed him a bouquet of flowers and a cake earlier in the day.

With specific instructions to ‘surprise’ her with them in front of other guests later, Mr Aslam obliged as her happiness as a guest at the hotel was important to him.

His generosity in helping the lady proved how sincere his willingness to cater to others’ needs were.

Went out of his way to help guests plan housewarming party

Hilarious moments aside, Mr Aslam had once patiently attended to several guests who spent 7 nights in a hotel suite. 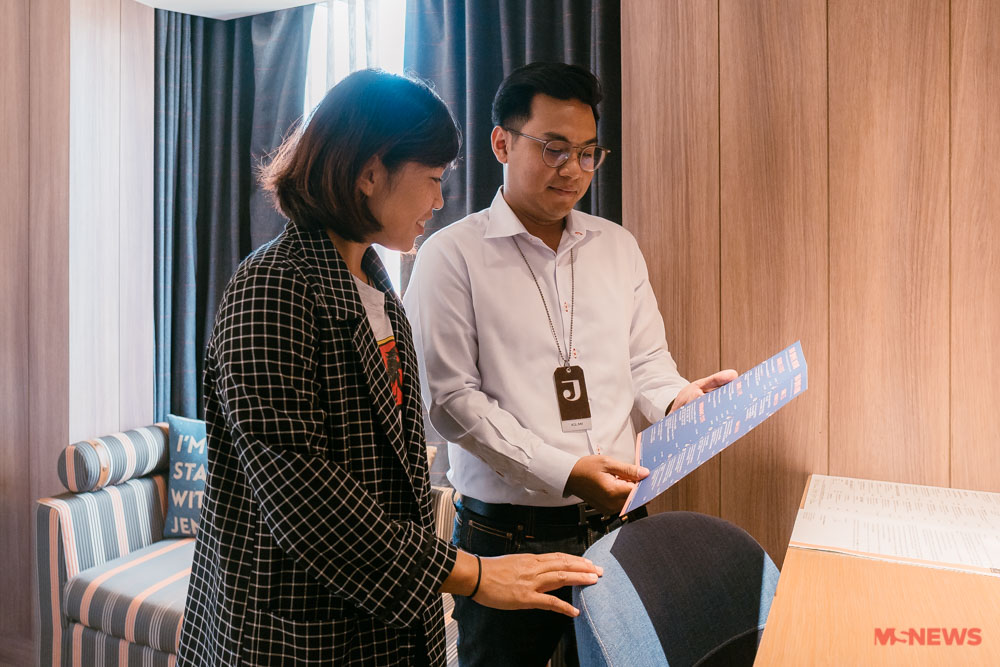 Though he was only told to cater to them throughout their hotel stay, he went above and beyond by helping them organise a housewarming party at their new property shortly after they checked out.

“It was something I felt I needed to do. It wasn’t about trying to get extra attention or into my manager’s good books. I was assigned to these guests, and by helping them with what they needed even outside of the hotel, it is a natural part of hospitality for me,” he shared.

Although it meant working outside of office hours and taking up his personal time, Mr Aslam took it upon himself to help the guests.

For half a day, he oversaw the party for close family members. His job didn’t specifically require it, but he went ahead nonetheless.

He helped relieve them of mind-boggling tasks like where to go for catering, and making the arrangements — almost like a trusty butler.

It is this sincere commitment to serve even outside the hotel that makes Mr Aslam such an excellent worker, as he values his relationship with his guests.

Unlike many of us who may regard daily work as routine, Mr Aslam faces each day positively, striving to put a smile on everyone’s faces.

He goes the extra mile, often addressing guests by their name, so they’d feel like they’re right at home. 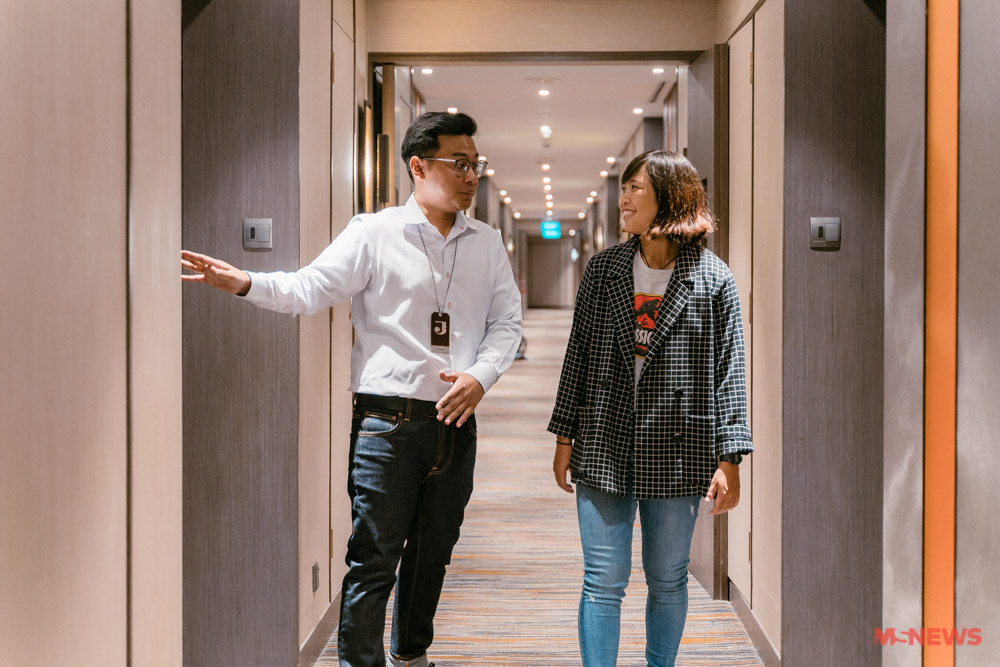 Raking up at least 7 of such reviews so far, Mr Aslam has quite literally made a name for himself as an illustrious front desk staff. Mr Aslam interacts with his colleagues in a similarly heartwarming way, treating everyone with the utmost respect. 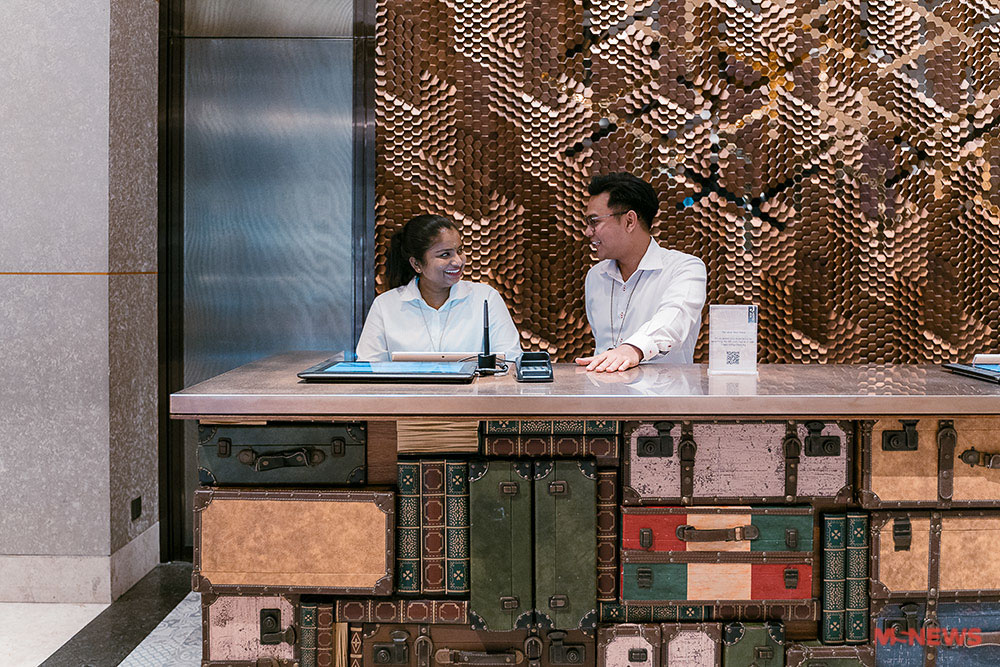 Professionally, his 7 years of experience at Shangri-La Group allows him to share useful insights that help make the work environment an effective yet lively one.

Of course, working in the hospitality industry is more than serving hotel guests with a smile.

Mr Aslam has been involved in several high-profile events, such as the annual International Institute for Strategic Studies (IISS) summit at Shangri-La Hotel,Singapore.

The summit hosted defense ministers and military chiefs from various countries, which meant that Mr Aslam had to be very careful and attentive to every little detail to ensure all was in order.

Some of the difficult tasks he had to undertake included keeping attendees’ movements confidential in spite of constant enquiries from the media. 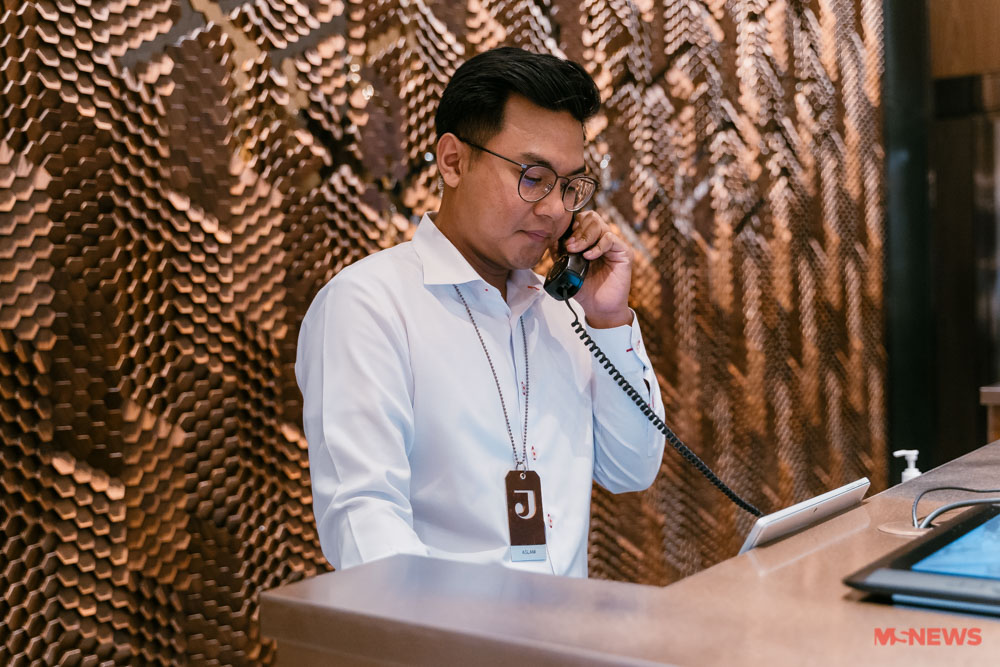 With so many notable individuals under his watch, Mr Aslam was thankfully able to keep the event going smoothly, and went on to be a part of several more like it in subsequent years.

Never lets difficult situations get him down

On a daily basis, receiving guests from all over the world poses its own challenges too.

Mr Aslam recalls the struggle to communicate with guests from countries like Russia, Mongolia, Vietnam and Thailand.

He and his team resorted to translator apps to convey their messages, which still wasn’t ideal due to the software’s inaccuracy.

Determined to help, however, they pushed on and even turned to using hand gestures and broken down sentences. Everything they say has to be spoken with tact, as even the slightest hint of the wrong tone can affect guests’ understanding.

At the end of the day, obstacles such as language barriers are merely minor challenges Mr Aslam and his colleagues have to overcome.

And they do so with great efficiency as well as patience, leaving a positive impression on guests.

Know someone like Mr Aslam, who takes pride in their work, is inspirational, and deserves to be recognised? Nominate exemplary workers like him for the FastJobs Excellence Awards. Nominations open now!

Mr Aslam’s stellar track record and work attitude are why Hotel Jen has recognised him as one of their most outstanding employees. 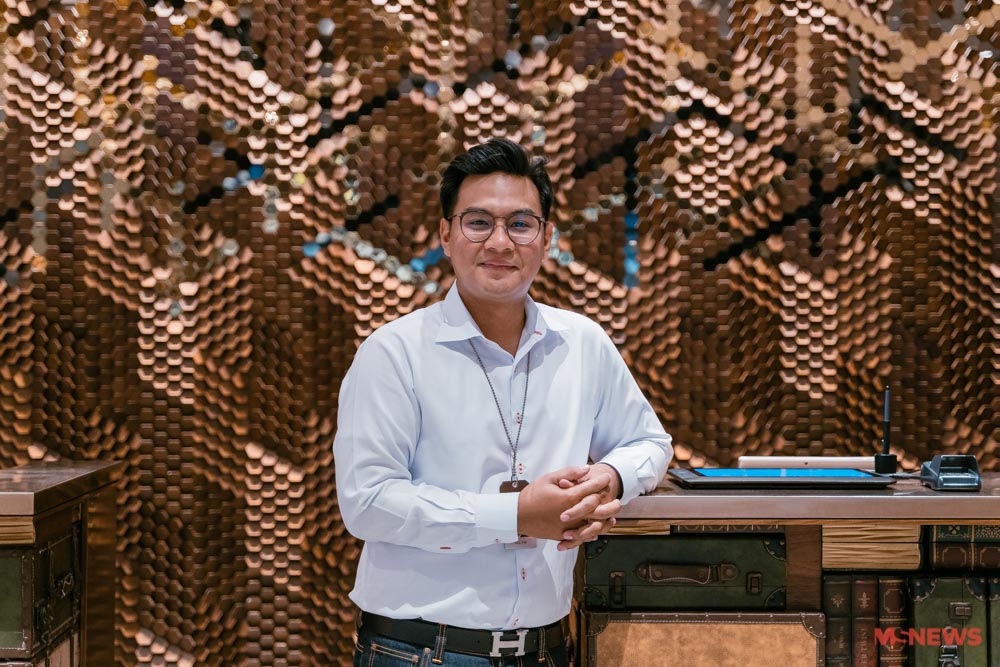 Many other service and operational staff like him have displayed excellence at their workplace across various industries, which is why FastJobs has launched the FastJobs Excellence Awards to compliment deserving people and recognise their dedication to excellence and growth.

Mr Aslam would make an ideal candidate for the Outstanding Service Award for performing above expectations and going to great lengths to provide the best possible experience to his guests.

Know of someone deserving? Share their story with us. Simply visit the FastJobs Excellence Awards Facebook page here, and join the group to learn more about the award and submit nominations.

Alternatively, you can visit the link here to start nominating for Rockstar Rookie, Outstanding Service & Life Long Learner award categories. Stand a chance to win prizes up to $3,000 per category.

Show your appreciation for a deserving employee and recognise them for their efforts, because hard work should never go unnoticed.

This post is brought to you in collaboration with FastJobs.