Must Share News – Independent News For Singaporeans
Home Current Affairs Education S’pore Student Shares Lesson In Privilege, Says Not Every School Is A... 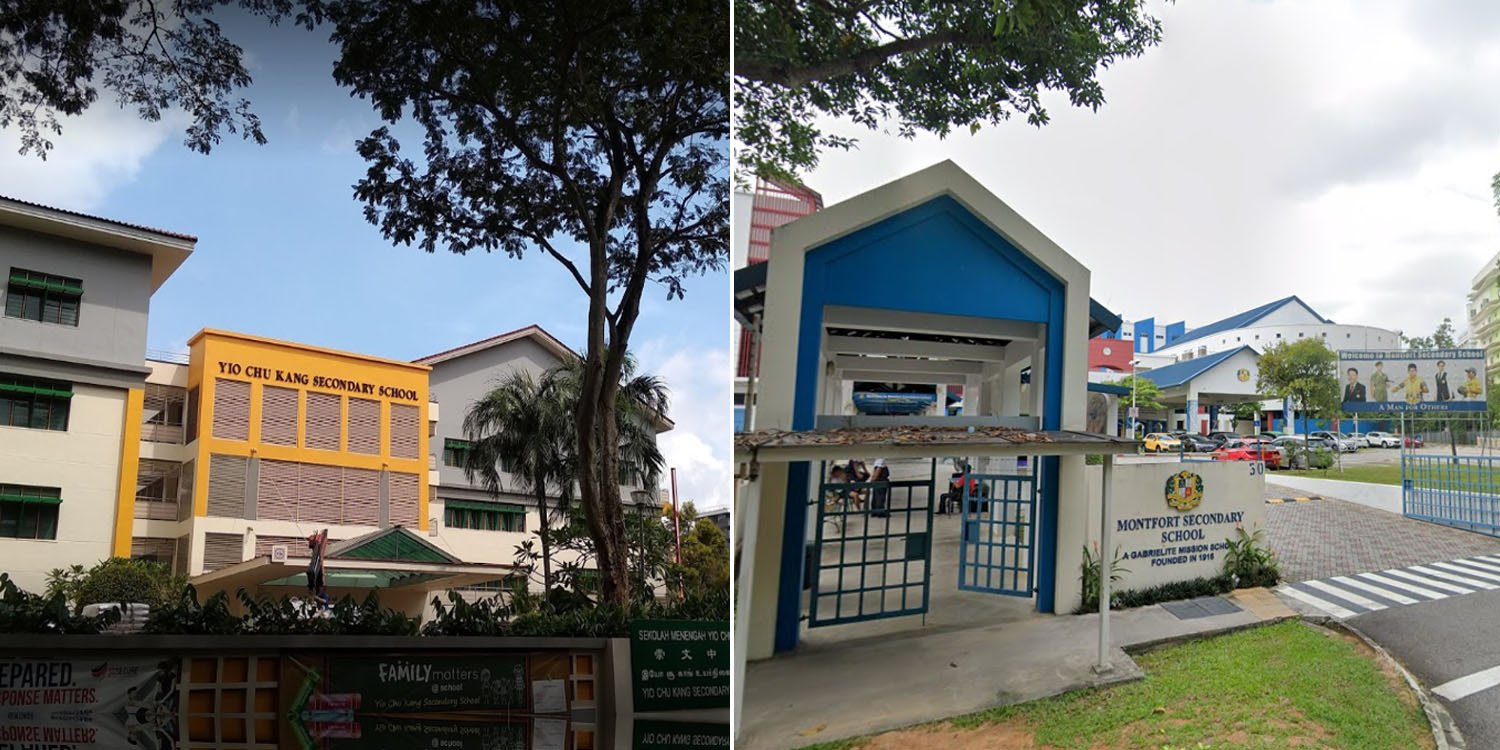 Singapore Student Reflects On ‘Every School A Good School’ Mantra

Growing up, most Singaporeans would have heard the mantra — “Every school is a good school”.

Popularised by Minister Heng Swee Keat in his time as an ex-Education Minister, the phrase has very quickly become a local lingo staple.

On Sunday (2 Aug), a netizen came forth to challenge this seemingly entrenched notion with personal anecdotes from his schooling days. 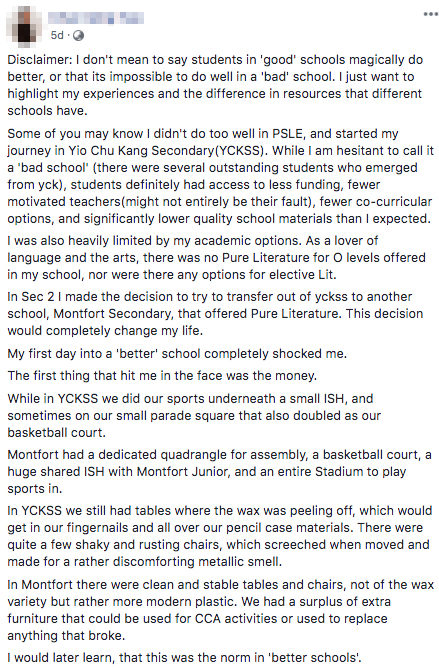 Mr Chan begins by recounting how did not do well in PSLE and started his secondary school journey in Yio Chu Kang Secondary (YCKSS).

Though he was hesitant to label it as a ‘bad school’, Mr Chan did proffer the view of how students had access to “less funding” and “fewer motivated teachers”.

This was also accompanied by lesser co-curricular options on the table, as well as “lower quality school materials”.

A lover of language and arts, Mr Chan had wanted to study Literature, only to realise that Pure Literature for O levels was not offered in YCKSS.

After a year, Mr Chan decided to make the decision to transfer out to a school that offered Pure Literature, Montfort Secondary. This very decision later changed his life.

Differences between both schools

Remembering how his first day in a ‘better school’ had completely shocked him, Mr Chan drew parallels between both institutions. 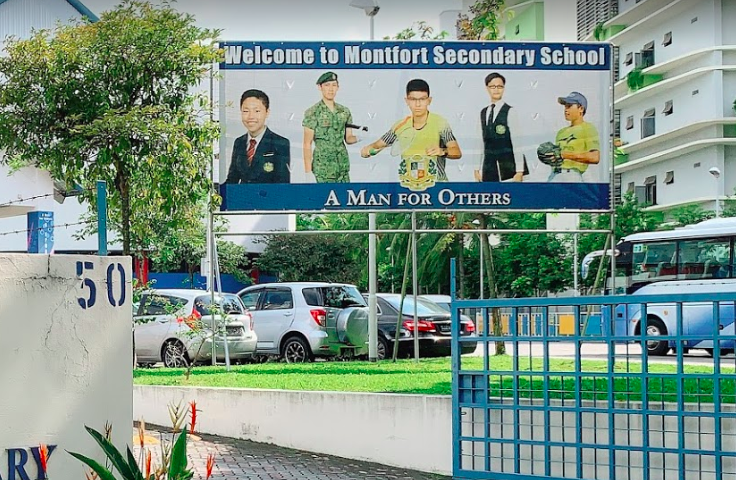 He recalled how his first secondary school had tables with the wax still “peeling off” and that students had to sit on “shaky and rusting chairs”.

This was contrasted against Montfort Secondary’s clean and stable furniture. In fact, his latter school had a surplus of extra furniture that could be repurposed for CCA activities.

The differences did not stop there, however.

Mr Chan described a jarring dissonance between teachers’ attitudes towards the students in his account.

Back in YCKSS when Mr Chan inquired on the possibilities of doing literature, he was allegedly met with a “snicker” from his English Head of Department (HOD) — who told him “either nobody will join, or everyone will fail”.

Juxtaposing this with his first literature class in Montfort, Mr Chan recounted how he teared up at the simple fact that his literature teacher believed in her students when she said,

Anyone can study and do well for Lit.

This disparity was also extended to the teachers’ availability for quality consultations, learning environments and study notes, said Mr Chan.

The norm in ‘better schools’

Naturally, Mr Chan was appalled in the difference in quality of education based on his experience. He claims his grades were directly affected by relative improvements in environments and customised notes.

The scariest thing is how invisible this privilege is. It scares me that people can still look down on ‘bad’ schools and think people there underperform out of laziness.

Mr Chan, who is now a writer and photographer, centered his final point to urge people to take a moment to understand their privilege.

That perhaps there’s more to the situation than non-hardworking students.

Is every school a good school?

This anecdote has opened the floor for discussion between netizens about the spirit behind the quote, ‘Every school, a good school.’

Schools are important as a learning institutions for impressionable children and young adults. On this note, their capacity to offer children nothing short of the best should not be compromised. 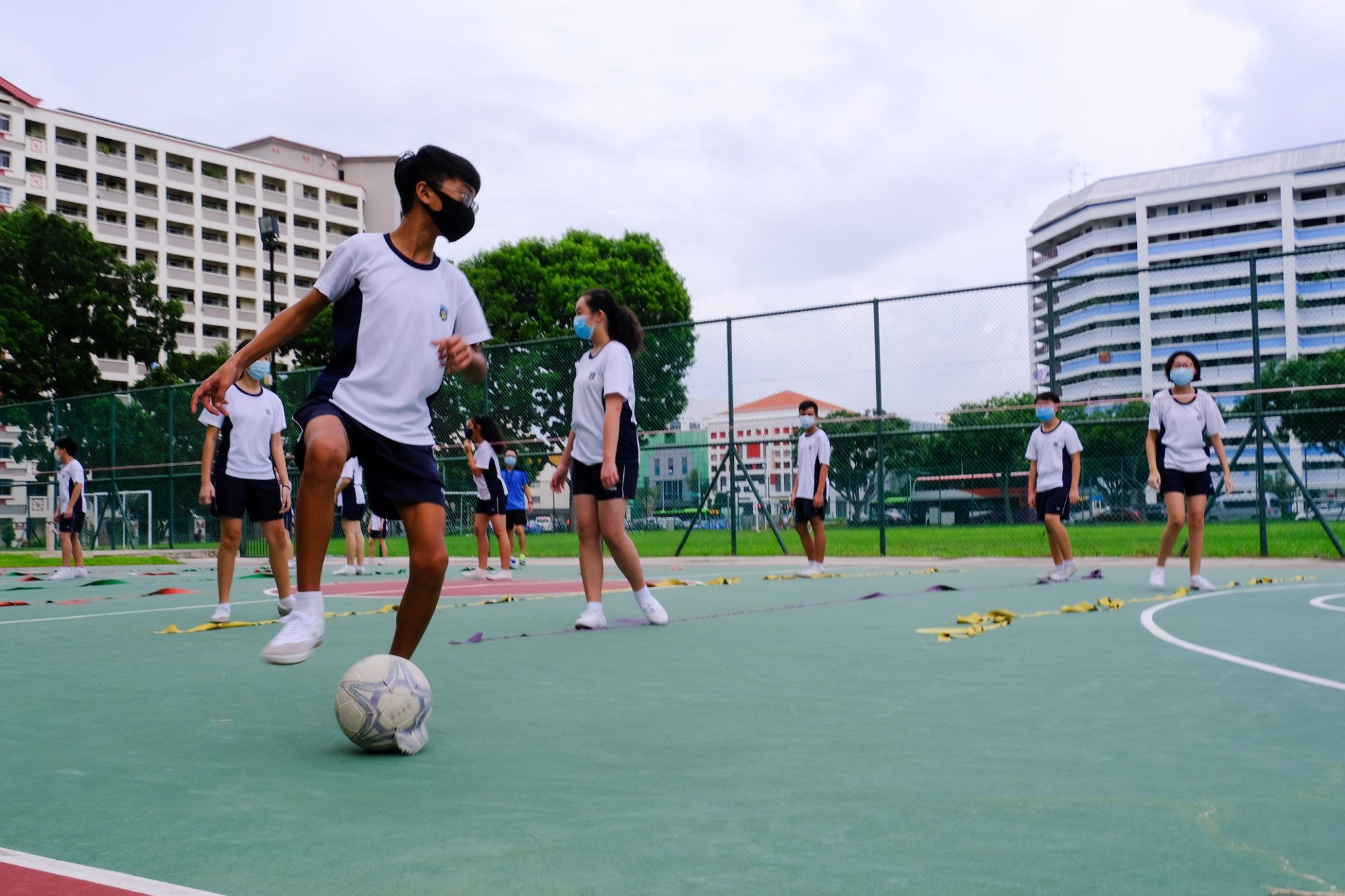 We hope that more measures will be taken to close the alleged gaps between different schools in Mr Chan’s anecdote.

Students, in having the proper access to the lessons they experience, both within and beyond the classroom walls, will inevitably shape them into the adults they are.

Examinations are often a litmus test for students’ abilities, but learning institutions themselves should also examine if they’ve given kids everything they need to excel.