He said he’ll be taking the necessary steps to vindicate himself and confirms that he is helping TKQP with internal investigations.

A lawyer and former debater, Imran Rahim, is under the spotlight for allegations of sexual misconduct.

Tan Kok Quan Partnership (TKQP), the law firm he works in, told TODAY Online that they are investigating claims of sexual misconduct.

Reform Party member Charles Yeo has been posting about the matter on Instagram, challenging him to issue a writ of defamation.

The firm says that Mr Imran is currently on a leave of absence while investigations are ongoing.

TKQP told TODAY Online that they were made aware of allegations on social media regarding Mr Imran, a senior associate at the firm. 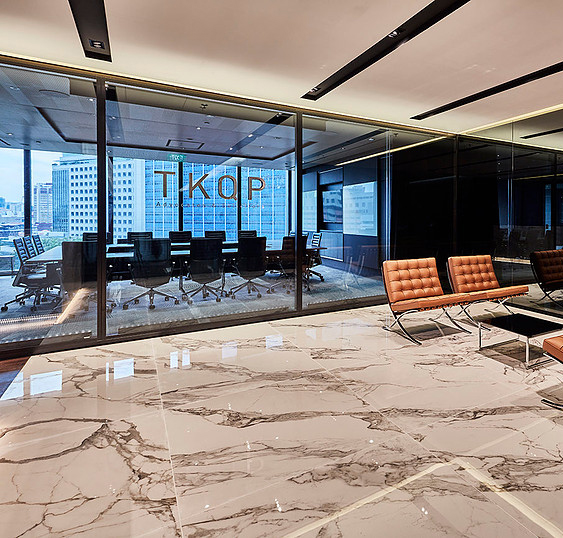 They are investigating these allegations independently, emphasising that it has a no-tolerance policy towards sexual impropriety.

Mr Imran had been working from home since April, the firm told TODAY Online.

Allegations of sexual misconduct towards interns

Mr Yeo had first broken the allegations on Instagram on 21 Jul, accusing Mr Imran of multiple instances of sexual assaults on at least 2 individuals.

He also posted a message from someone who claims that he allegedly preyed on young debaters as well as legal interns. 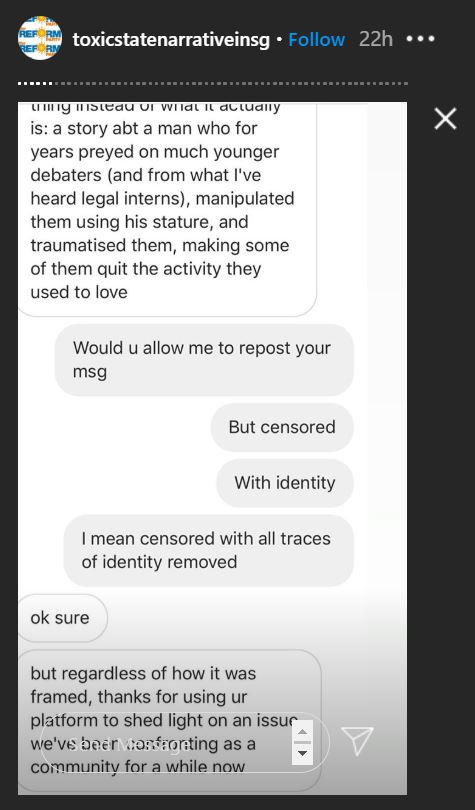 Following this, several others messaged Mr Yeo with similar allegations. 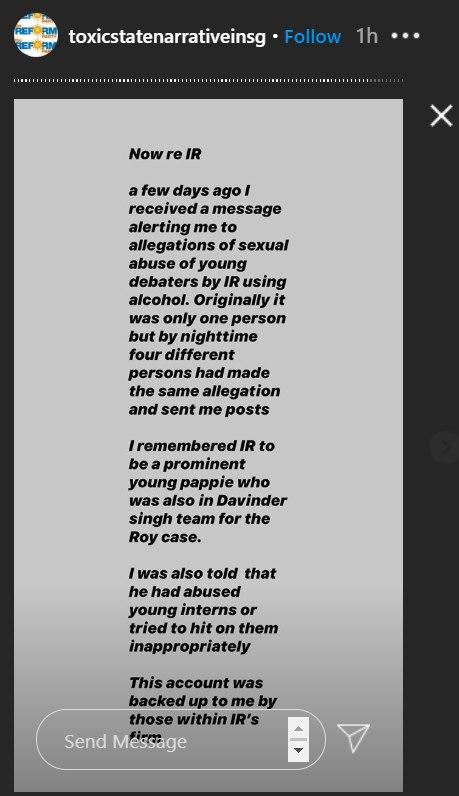 2 people from Asian debating circles also repeated these claims back in June. 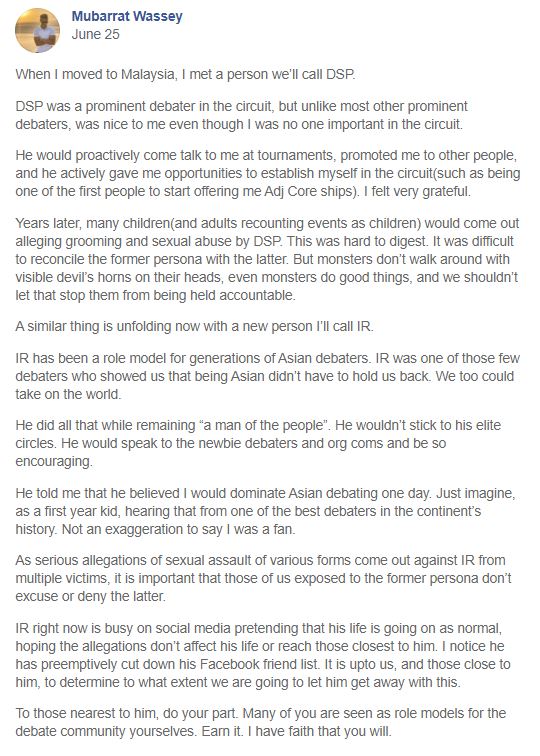 Both of them were reacting to the allegations, which are no longer publicly available. Served in grassroots community since 2016

Mr Imran is best known as being part of the legal A-team that defended Prime Minister Lee Hsien Loong in the lawsuit against Roy Ngerng in 2014. Court document listing Imran Rahim as one of the counsels

He had joined forces with Singapore’s top litigator Davinder Singh.

In addition to his law duties, Mr Imran also volunteered in the community, and has been highlighted by Cabinet ministers like Masagos Zulkifli and Ong Ye Kung.

The work he performed in the community included holding pro-bono legal clinics and helping out at community events.

He is the husband of Andrea Chong, a lifestyle influencer. 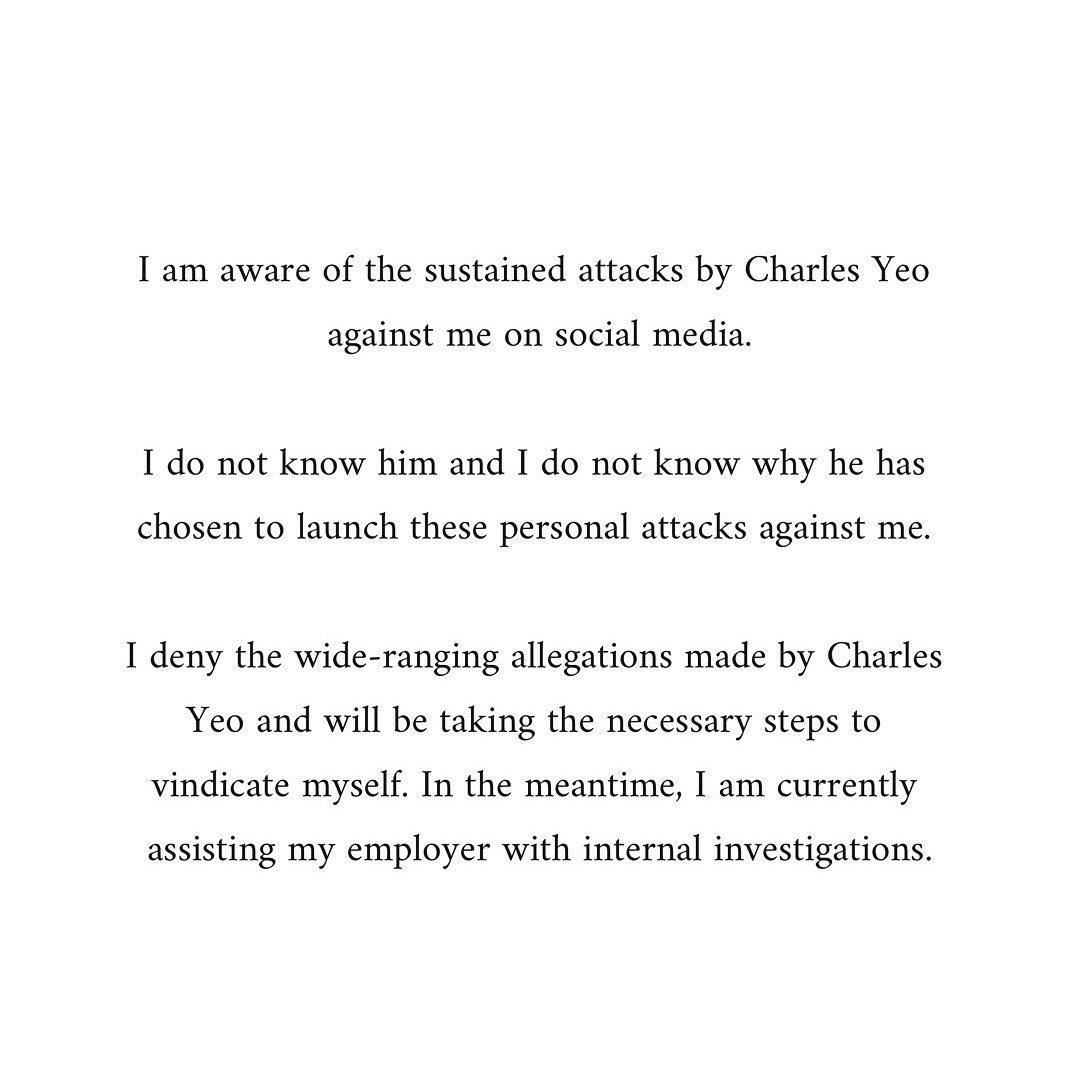 The post, which has had commenting restricted, confirms that he is aware of the allegations and is assisting TKQP in investigations.

He claims that he doesn’t know why Mr Yeo is making these personal attacks, and will take steps to vindicate himself.

Hopefully, the allegations are thoroughly investigated and that the truth surfaces, no matter the verdict.

Featured image adapted from Melvin The Fussy and Instagram.