Footballer Convicted Of Match-Fixing Appeals Against Life Ban, He Hopes To Move On 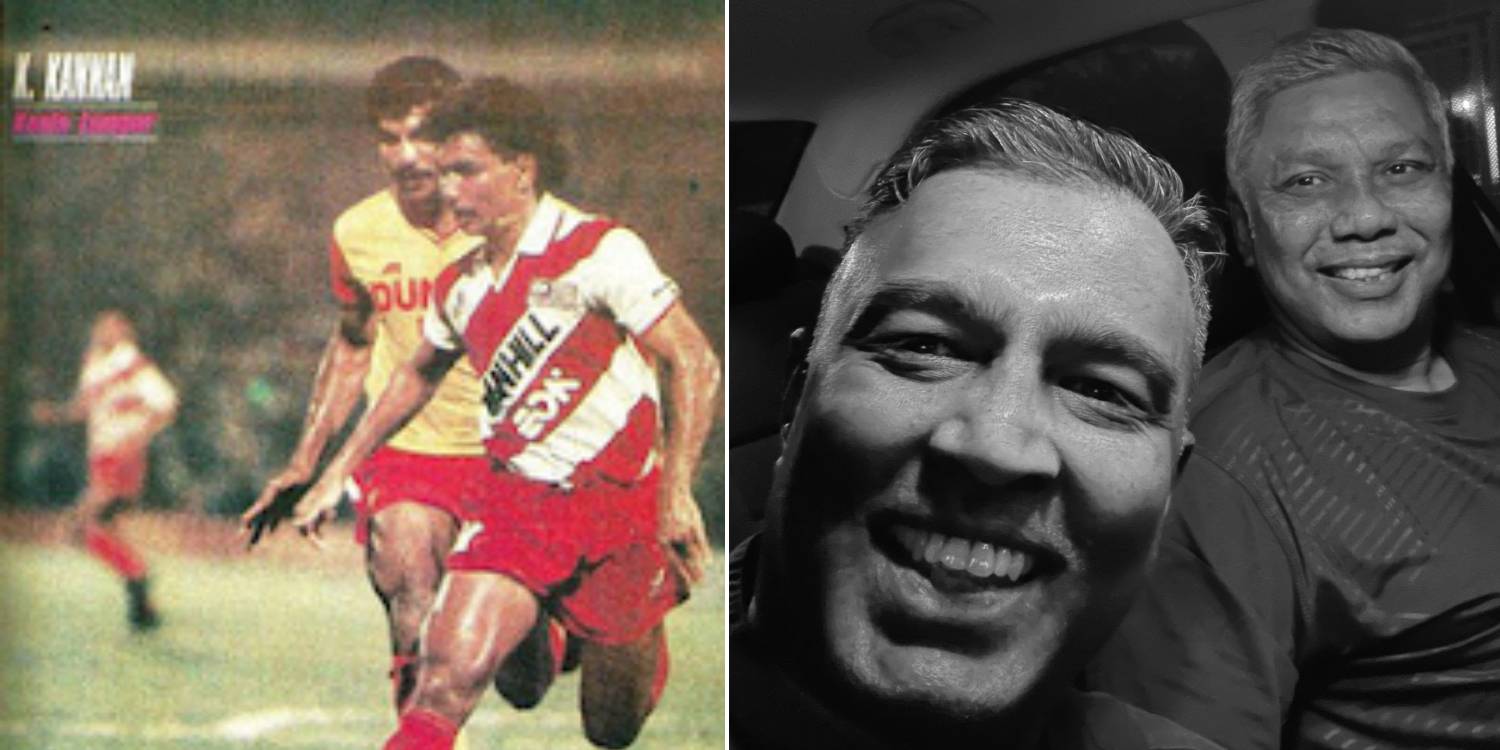 He is turning 60 and has no intention to play or coach professionally.

Match-fixing is a serious offence and merits heavy punishment. However, those given a lifetime ban from football are unable to even play or coach in a social setting, such as K Kannan.

Kannan Kunjuraman, better known as K Kannan, was convicted in 1995 of match-fixing and along with a jail sentence, was also banned from life from all footballing activities.

This ban on the former national striker remains until today, and he’s now appealing to have it lifted, shared Jose Raymond, who previously contested in Potong Pasir SMC during GE2020. 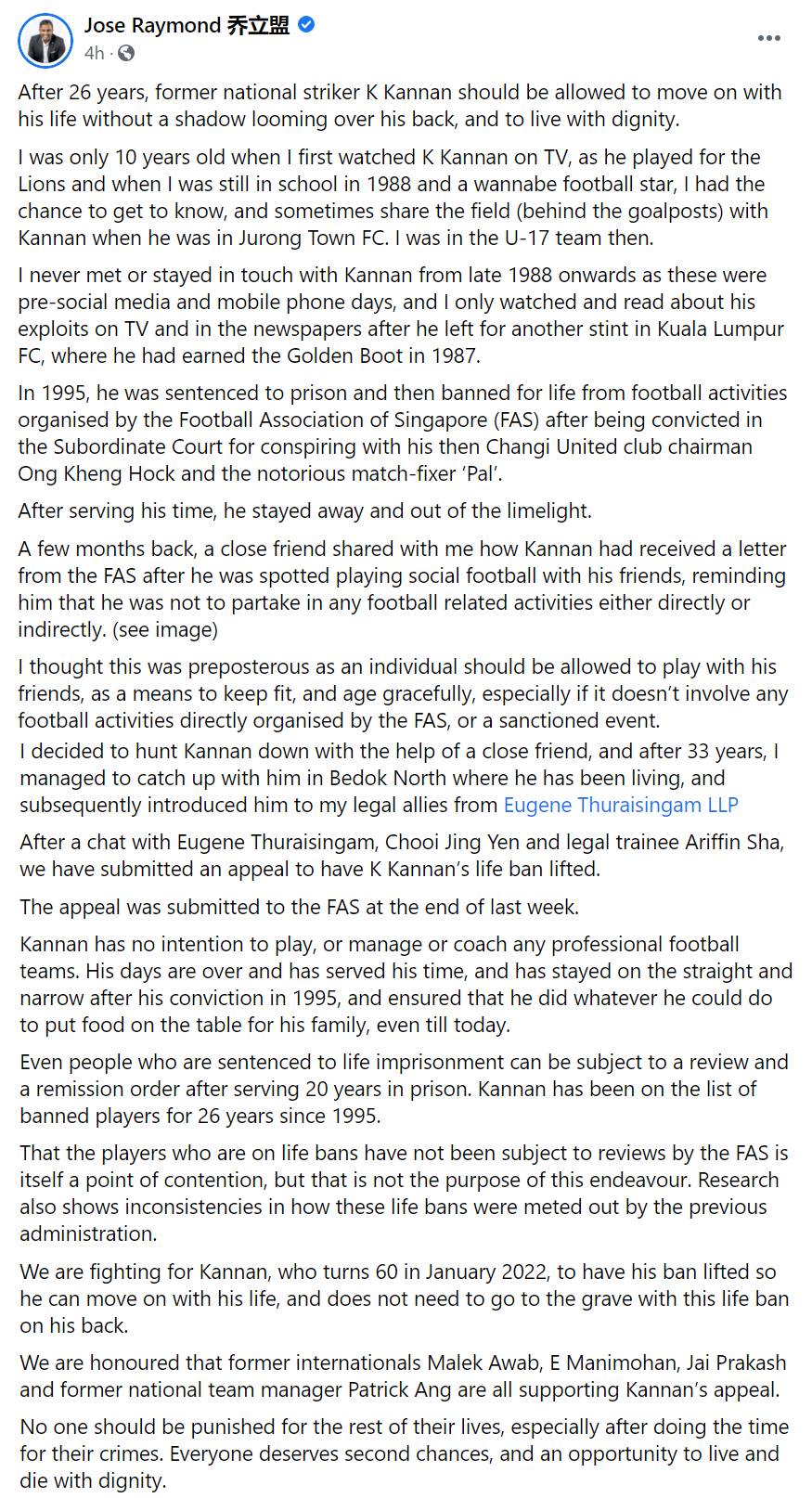 At his peak, Kannan appeared on TV with the national team, which played in the Malaysia Cup.

But came a fall from grace when he and Changi United manager Ong Kheng Hock were found to have offered $100,000 in bribes to a goalkeeper.

He was fined $40,000 and jailed 18 months, along with an order to pay a penalty of $5,000 for corruptly receiving gratification, according to The Monitor.

He was jailed and after that, stayed out of the limelight.

However, The Monitor reported that in Aug 2020, he received a letter from the Football Association of Singapore (FAS).

A close friend had told Mr Raymond that Mr Kannan was censured for playing social football with his friends, prompting the FAS letter. 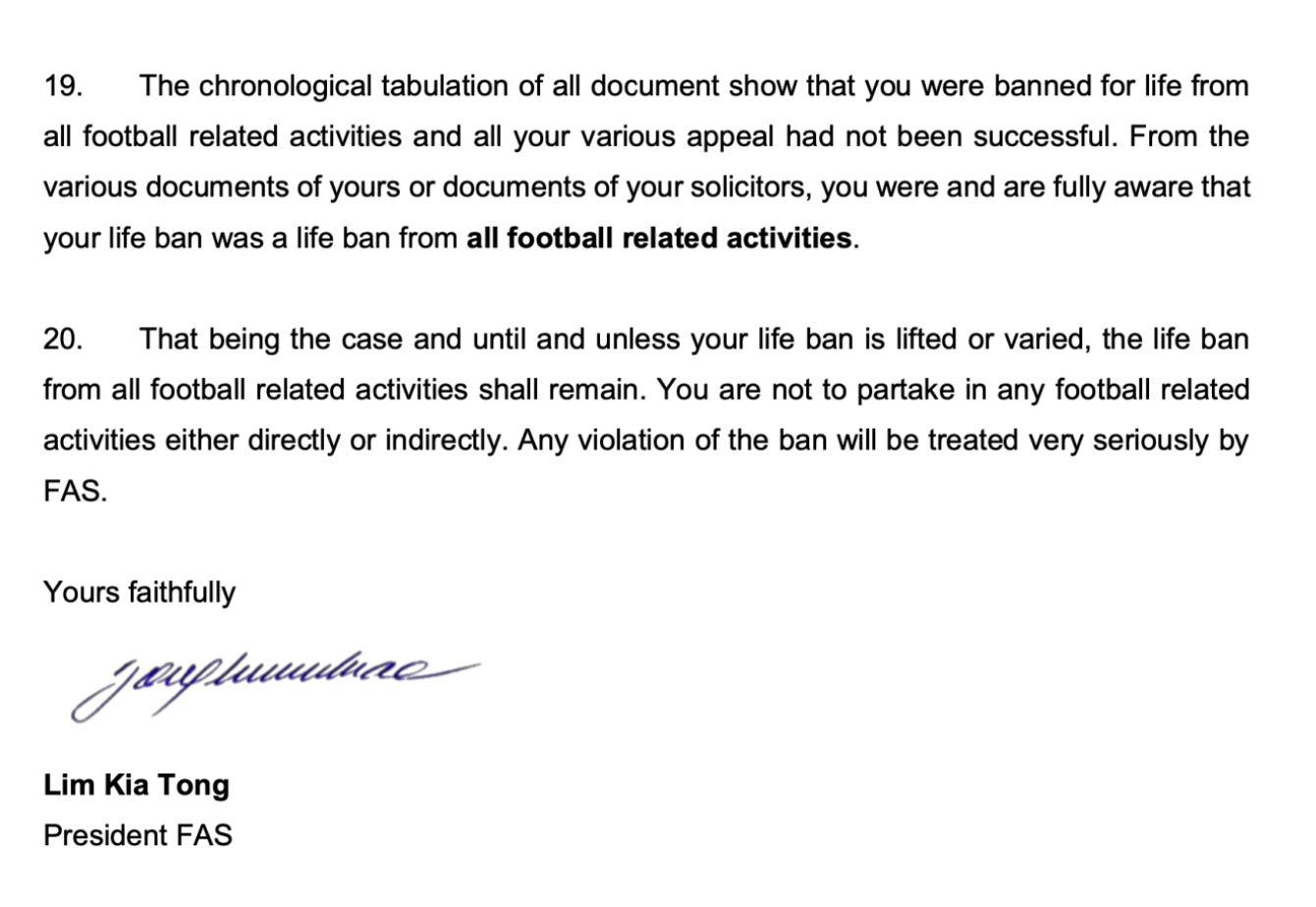 Mr Raymond found this “preposterous” and argued that one should be allowed to play recreationally as a means to keep fit and age gracefully.

Mr Raymond shared that he’d briefly been in the same team with the former national player when they were in Jurong Town FC in 1988.

So he decided to establish contact with Mr Kannan, and introduced him to lawyers from Eugene Thuraisingam LLP.

The team consists of the following:

Wants to live without life ban

The purpose of the appeal is so that K Kannan “can move on with his life, and does not need to go to the grave with this life ban on his back”.

Mr Raymond said that he has no intention to play or coach professionally again, having stayed out of the scene since his ban and working to feed his family.

They now hope that as he turns 60 next Jan, he can finally play socially again.

He compared this to prisoners sentenced to life imprisonment, where they can get reviews or a remission order to their sentence.

Hope for appeal to be considered fairly

Most probably wouldn’t have heard of K Kannan after his conviction — and that’s likely a good thing.

Some may argue that the ban is excessively harsh, but at the same time, we do understand that a strong stance against match-fixing is required.

However, given K Kannan’s age, a review of his status shouldn’t be out of the question. We hope that the appeal will be considered fairly and transparently.