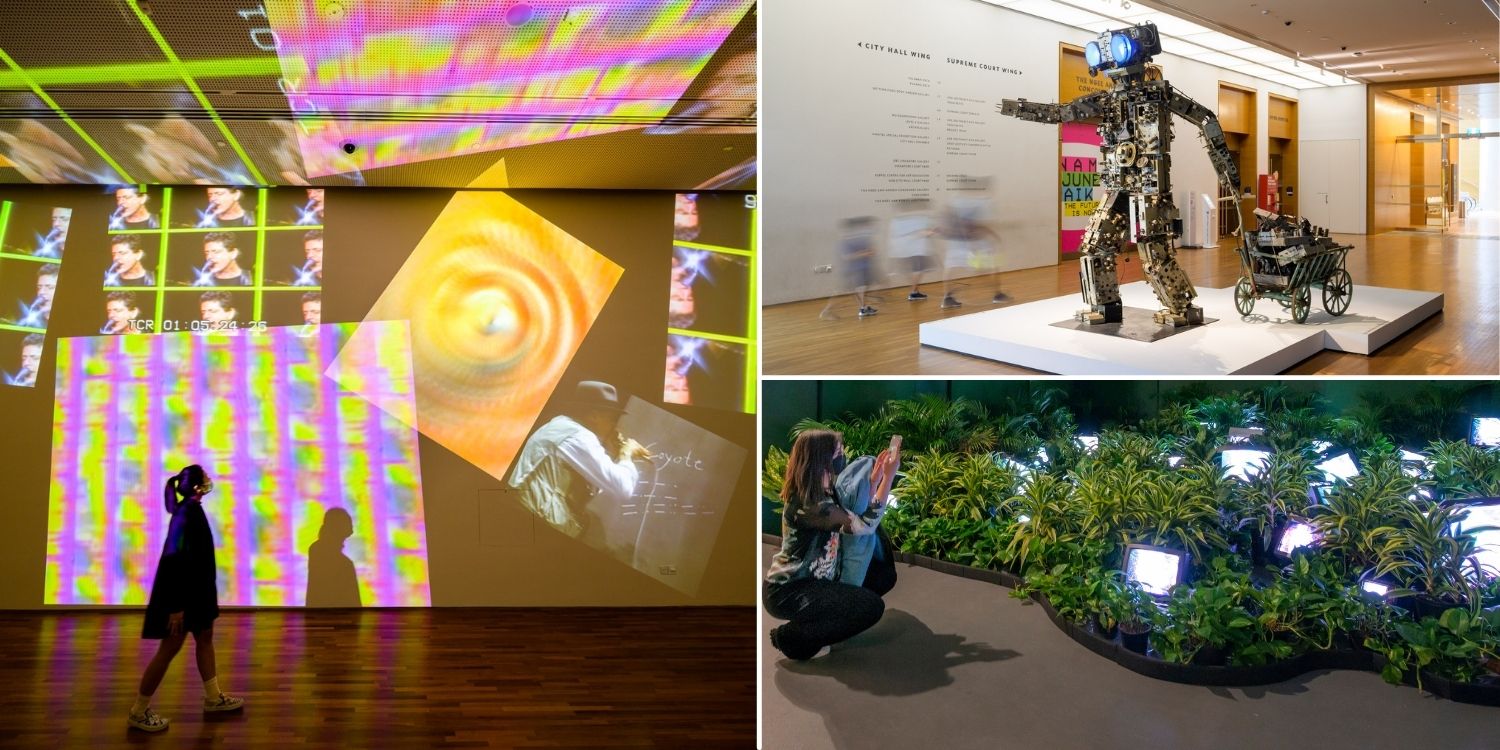 Immersive, multisensory & Instagrammable artworks from the inventor of the world’s first filter.

Nam June Paik: The Future Is Now At National Gallery Singapore Shows Effects Of Technology On Our Lives

Since the advent of the smartphone, we have been consuming content via ever-changing feeds, which we scroll through mindlessly.

While we only began forming this habit in recent years, Korean artist Nam June Paik had already envisioned such a scenario some 50 years ago.

A visionary beyond his time, his famed Nam June Paik: The Future Is Now exhibition which conveys many of his predictions is now available for viewing at the National Gallery Singapore till 27 Mar 2022. 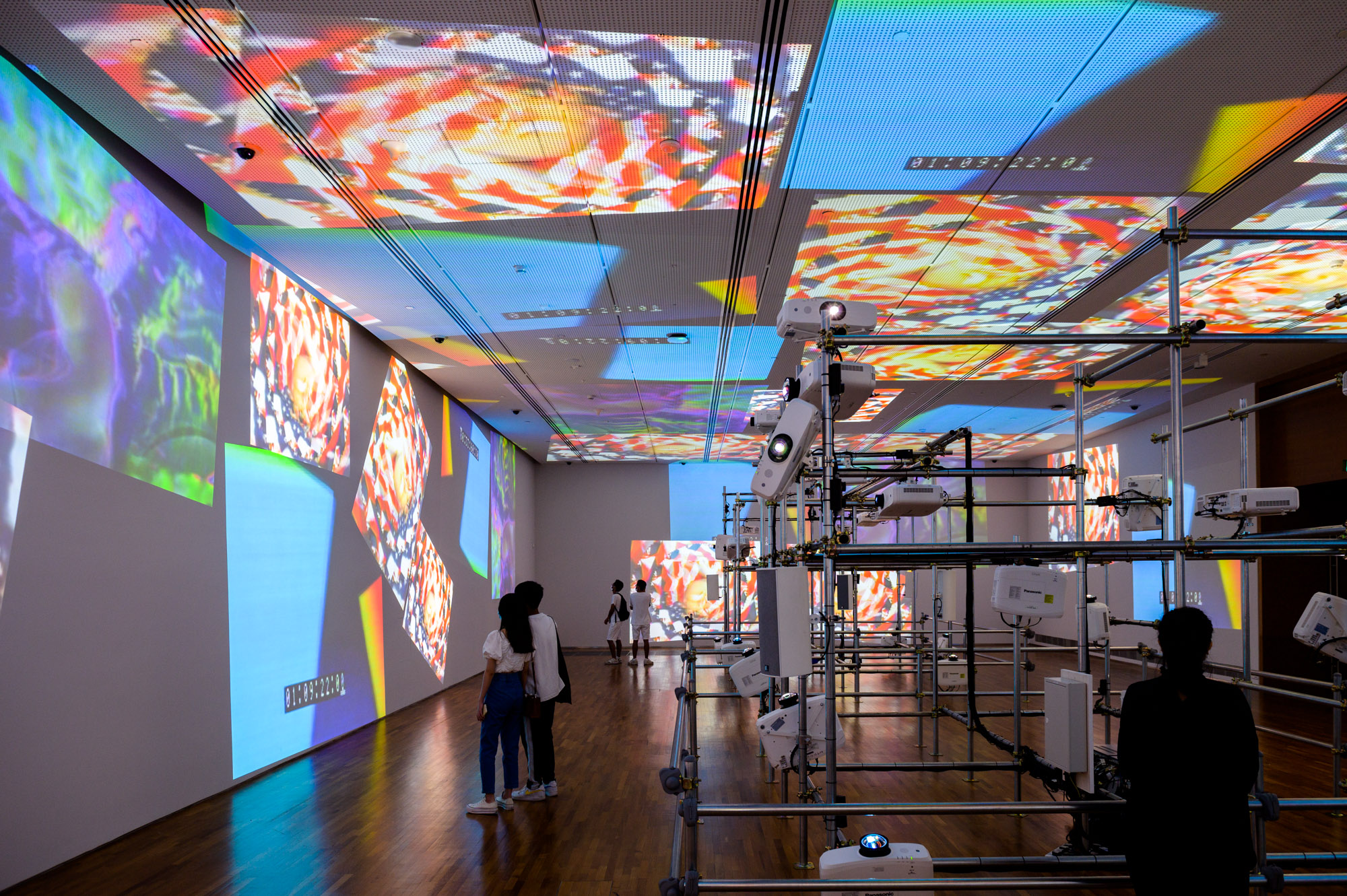 Here’s what you can look forward to when you step into the museum to admire Paik’s transcendental artworks.

As an internationally taught artist, Paik spent a considerable amount of time in various countries, observing the similarities and differences in everyday life.

His worldview is shown most significantly in TV Buddha, one of his most iconic works from 1974. 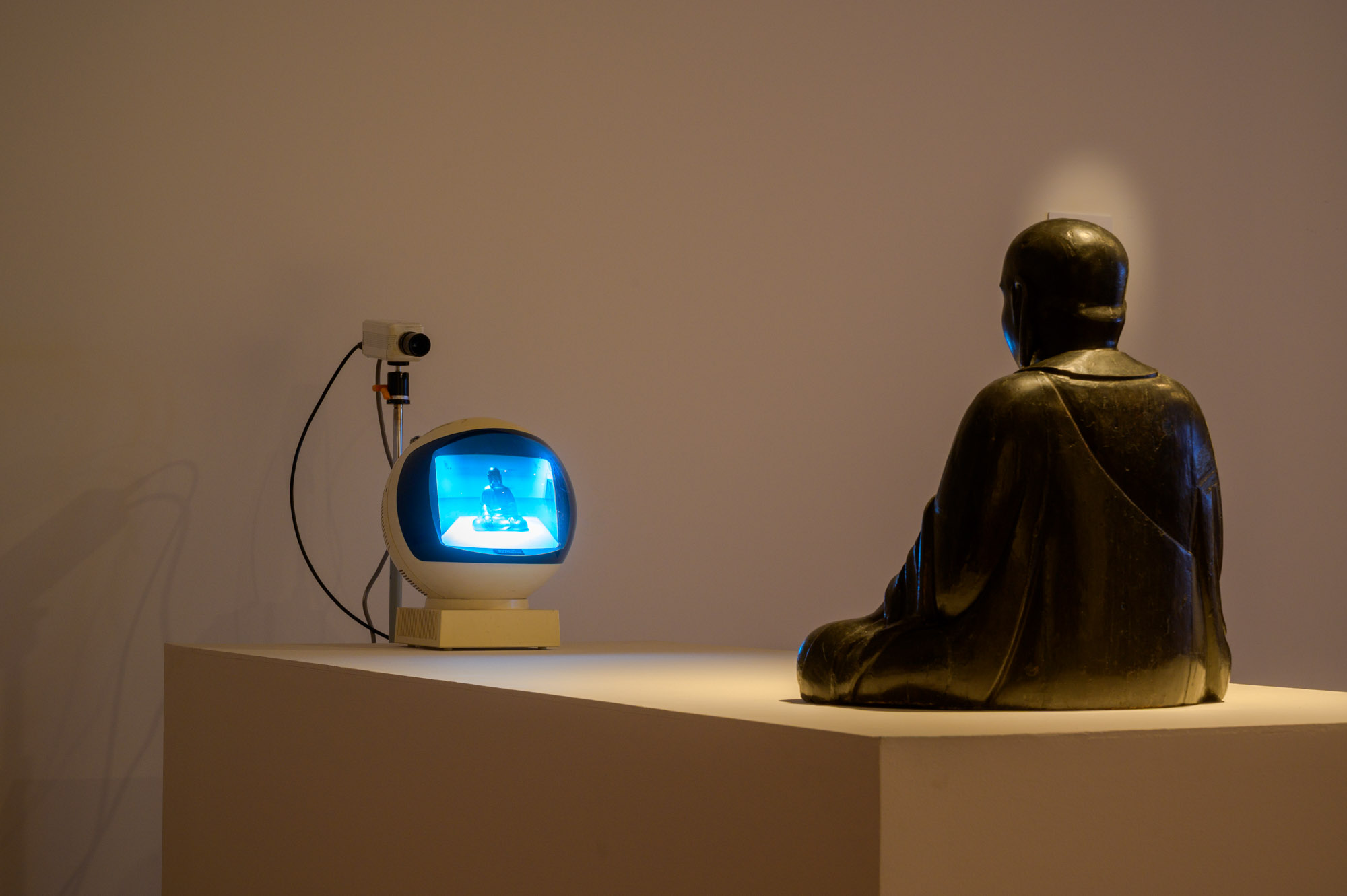 In this piece, an antique Buddha statue sits across a round television set that has an uncanny resemblance to an eyeball as it plays CCTV footage from a camera pointing back at the sculpture. 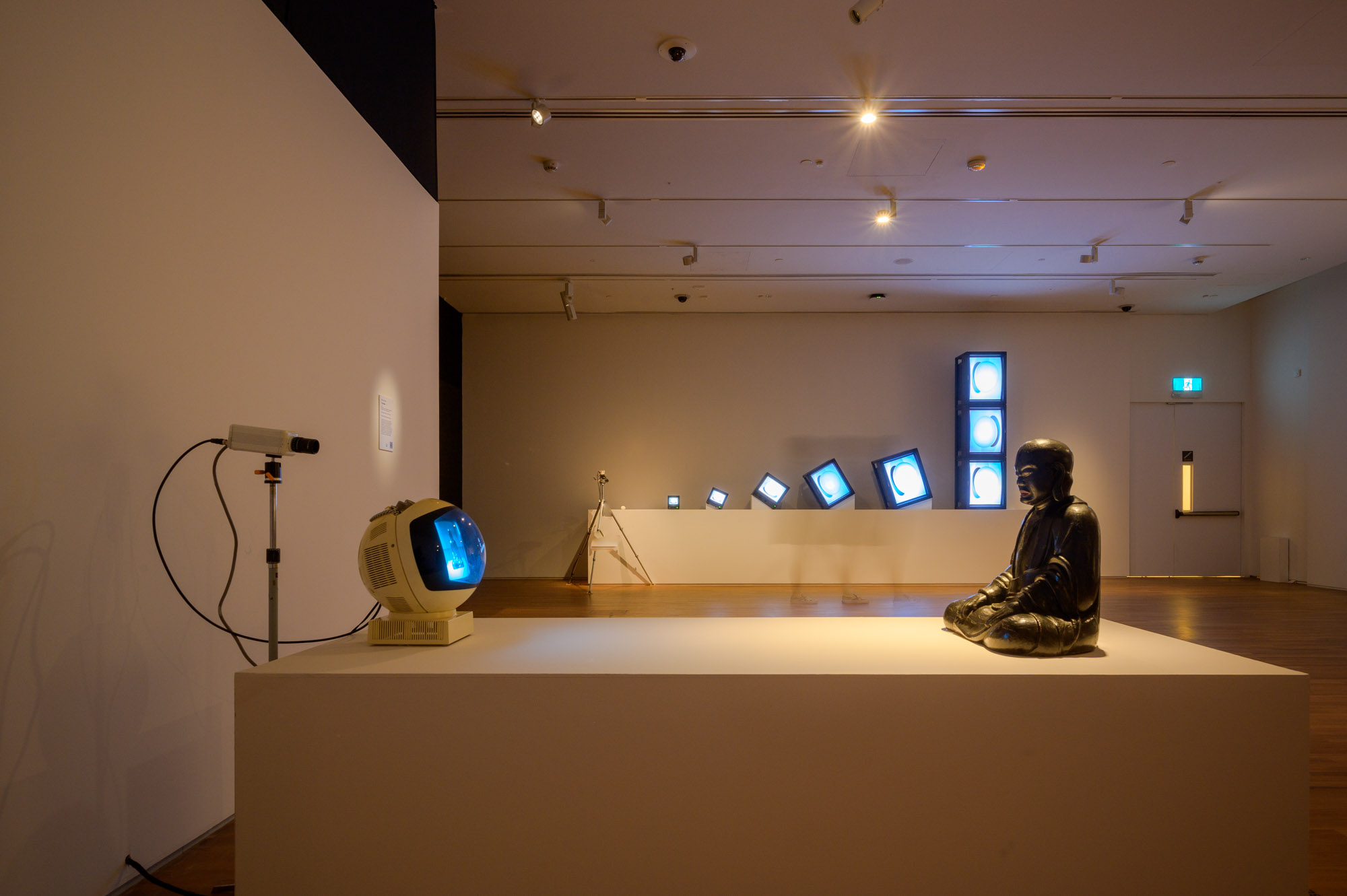 As the visitor stands behind the Buddha to look at the installation, the artwork includes them in the CCTV footage, so they become both the viewer and the viewed image.

Mirroring the reality in which we’re both subjects and consumers of mass media, TV Buddha forces viewers to reflect on this very literal perspective of our lives.

Music is both melody & silence

Cleverly manipulating the limited technology around him and challenging conventional ideas of an art medium, Paik held his first art exhibition in 1963 showcasing a dozen manipulated TV sets. 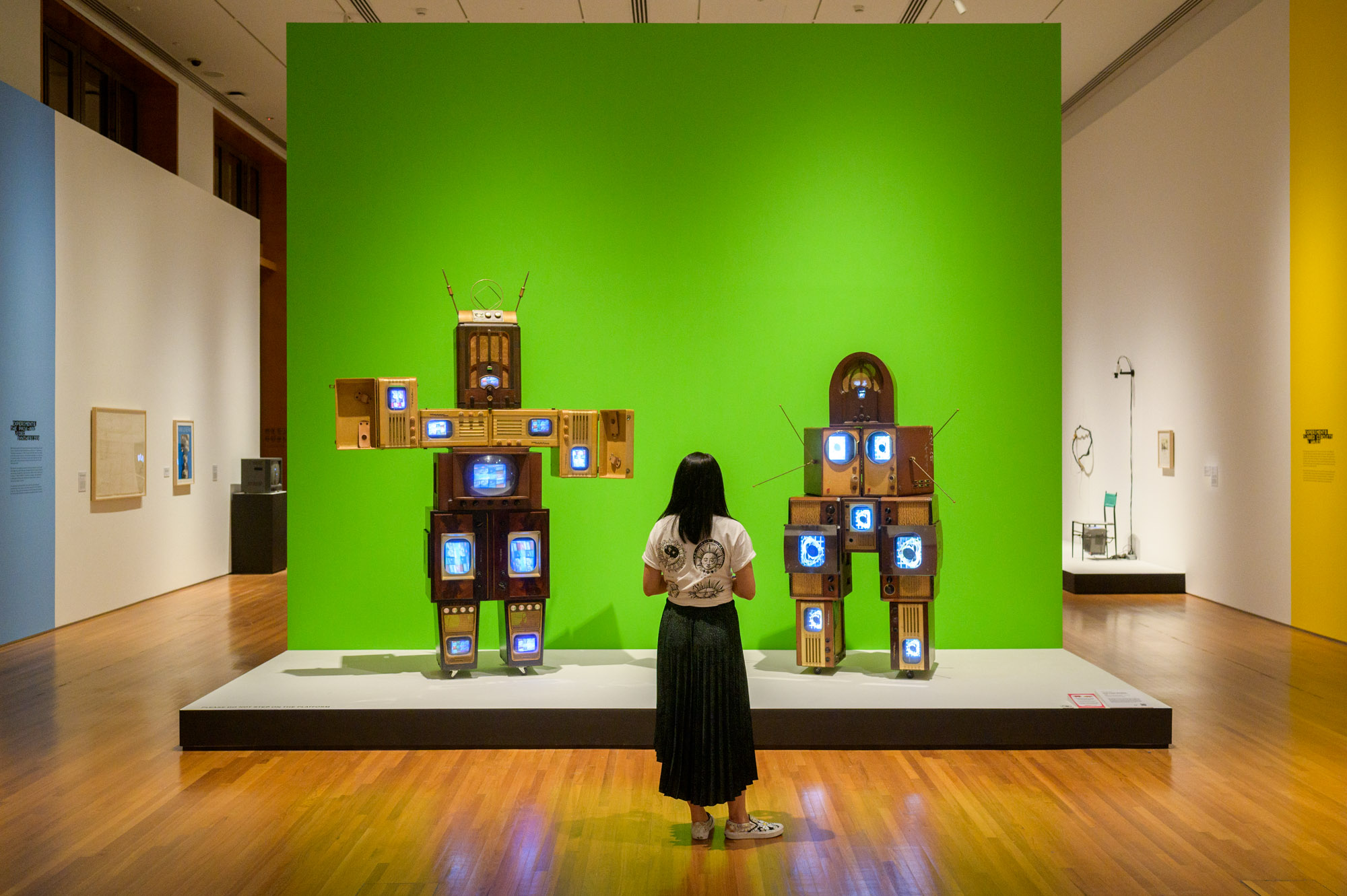 Family of Robot: Grandfather and Grandmother, 1986

This was the start of his fascination with electronics, which springboarded his constant desire to play with the latest gadgets.

As one of the pioneer artists to use TV and video in art, he created John Cage Robot II, a figure made up of vintage wooden TV cabinets, piano hammers, and keys. 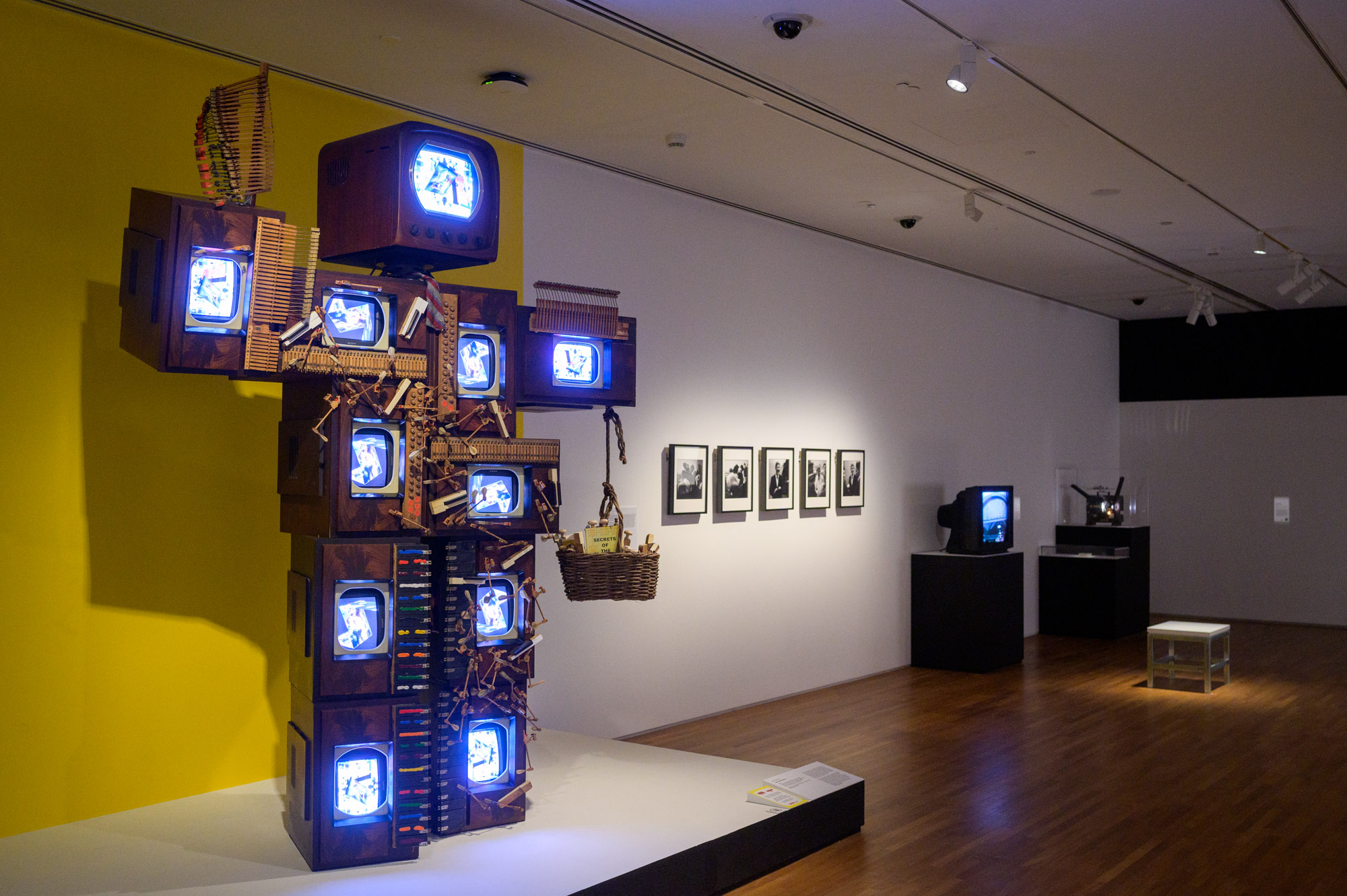 Drawing inspiration from friend and collaborator, musical theorist John Cage, this robot is an ode to 4’33″, a revolutionary composition comprising 3 movements of silence.

Despite being fashioned out of piano parts, John Cage Robot II only emits silence, as it represents a musician who has finished playing and left the piano seat.

While the audience contemplates the deafening silence, they’ll hopefully realise that the quiet is as important as the melody in music.

Technology is now part of our natural world

Unusual iterations of technology had always been the core of Paik’s work, as seen in TV Garden, where he places TV sets among a bed of tropical plants.

Imagining a future landscape where technology can coexist with nature, Paik manufactures a world where both are in equilibrium, something that we’re still aspiring towards today. 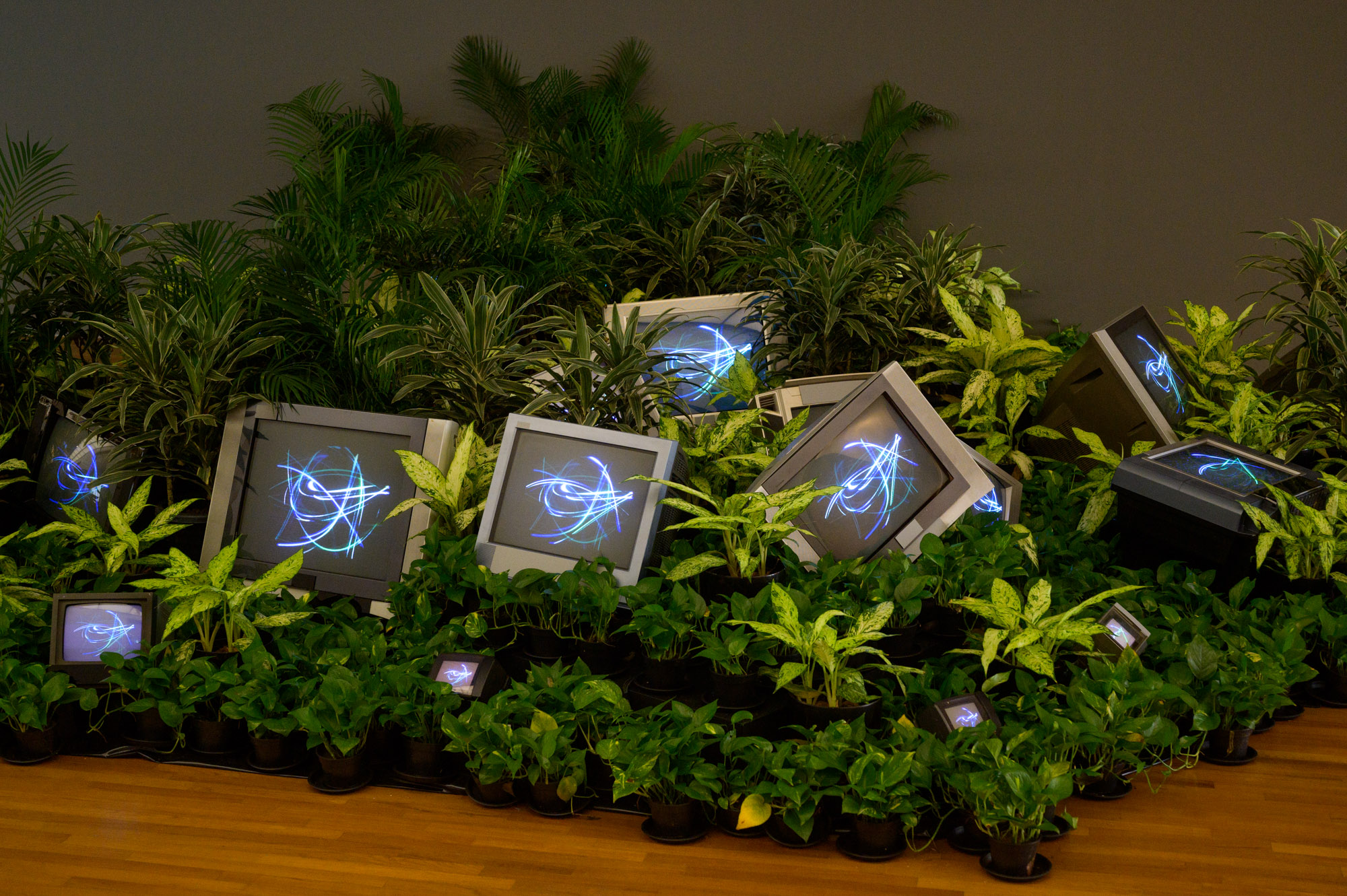 Rather than being in conflict with each other, the intertwining of the electronic devices with the greenery show their connection by extension, as they subsist in the same space.

Our life is half natural and half technological…we must have strong human element to keep modesty and natural life. 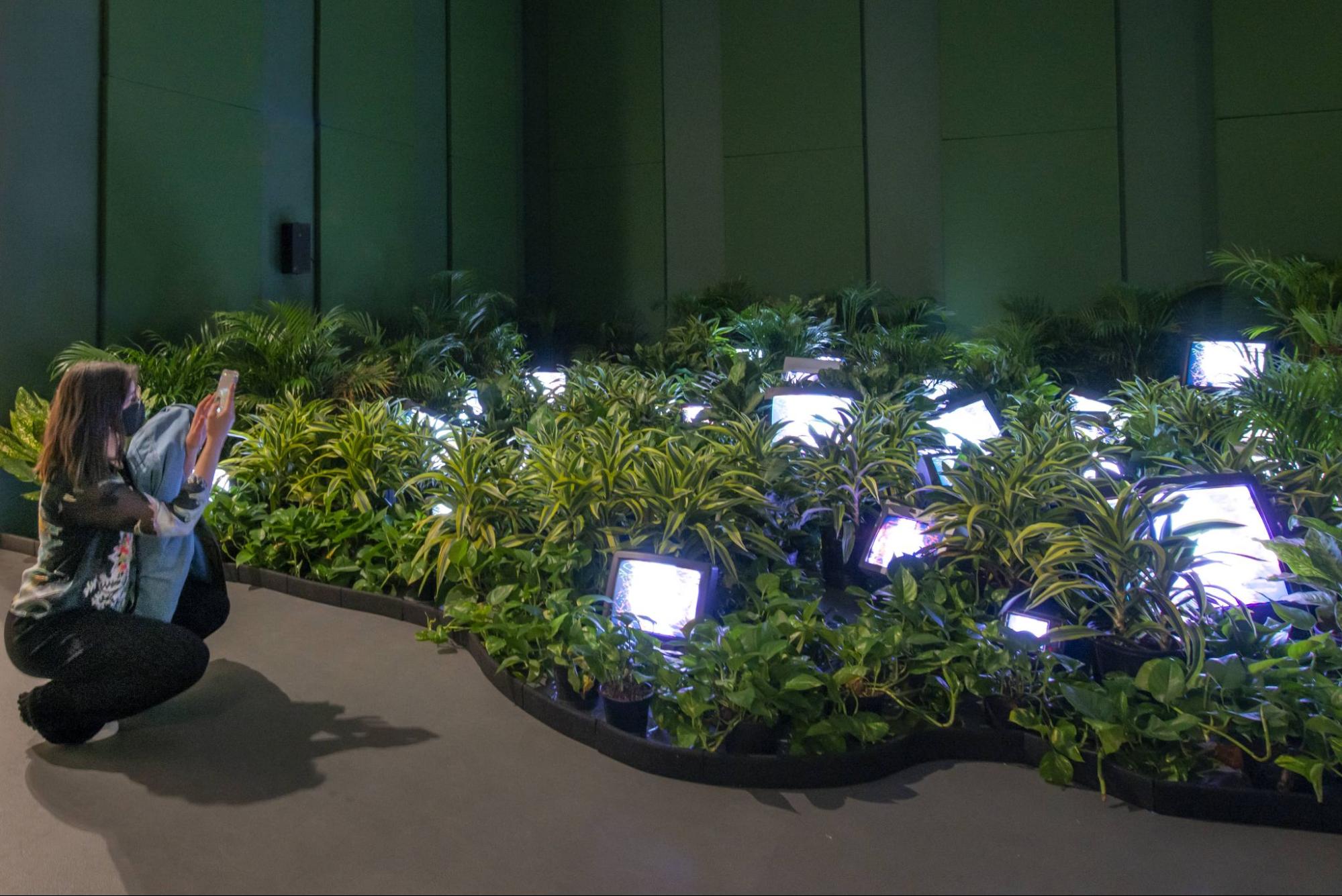 More than 40 years since he created TV Garden, we would not bat an eye seeing a TV screen in a park, showing how Paik once again eerily predicted the future.

Information is all around us in various forms

While most of the previously mentioned exhibits allow for quiet contemplation, Paik’s Sistine Chapel confronts viewers with a flurry of projected images all around them.

Borrowing the idea from its Roman namesake, the exhibit immerses visitors in an audio-visual experience that bears an uncanny resemblance to being in the Vatican. Instead of renaissance biblical figures, video projectors completely cover the room with fast-paced and overlapping images of pop icons. Booming audio and moments of silence accompany the visuals and transitions, creating quite a multisensory spectacle.

Taking in all the sights and sounds, visitors will unwittingly find themselves facing an information overload, much like how we consume media nowadays.

Getting a sense of the exhibition from images may be thrilling, but experiencing it for ourselves will offer a totally different perspective.

Since Singapore is the only Asian stop in the Nam June Paik:The Future Is Now global tour, this is a golden, and perhaps the last opportunity for you to witness the awe-inspiring works of the visionary artist Nam June Paik.

From 18-27 Mar, gallery-goers can enjoy the exhibition for free, before it ends its run here in Singapore. You can find out more about the exhibition via the website here.

Here’s how you can get to National Gallery Singapore:

Get your mind blown by visionary art

For those of us who rarely visit museums, we’d tend to imagine a trip there to be not much more than an opportunity to appreciate art in peace and quiet.

Now’s the chance to change that perspective, as well as our take on how technology and social media affect our lives, at an exclusive and immersive exhibition.

Jio your friends for the unique experience and snap funky photos or boomerangs together to remember the good times.

This post was brought to you in collaboration with National Gallery Singapore.