Must Share News – Independent News For Singaporeans
Home Politics General Elections No Hanging Out Around Nomination Centres On 30 Jun, As We’re Still... Some may have forgotten that we’re still in the midst of a Covid-19 pandemic, albeit it’s fairly under control. But our friendly neighbourhood police force is reminding us that this GE2020 is being held amidst one.

As Tuesday (30 Jun) is Nomination Day, the police have issued a security advisory for nomination centres on Monday (29 Jun) — namely, no large crowd gatherings. 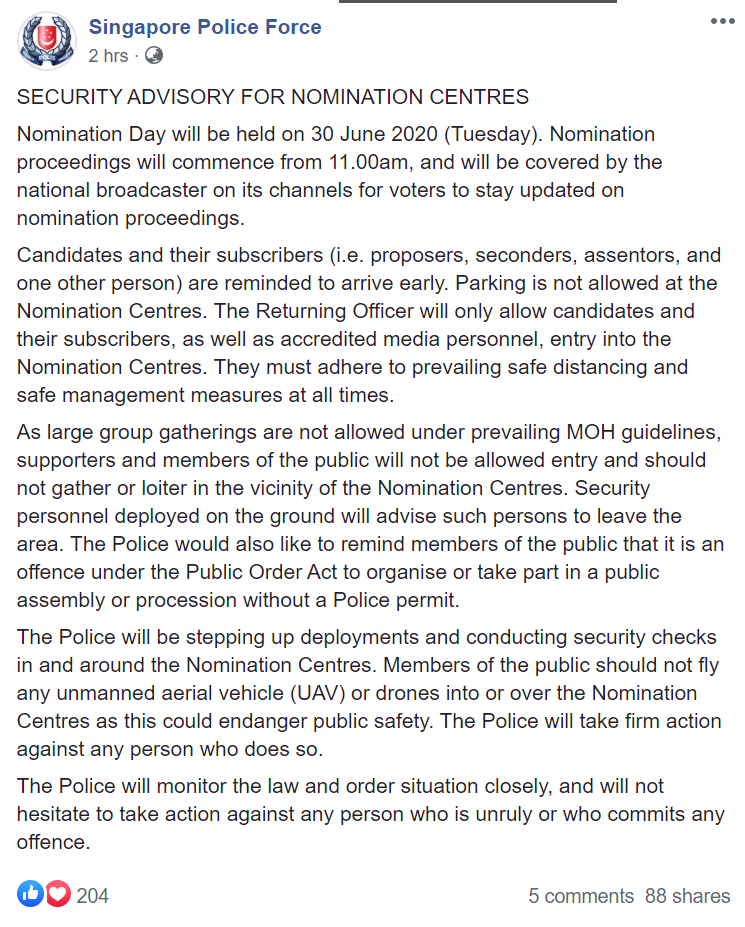 Because, you know, it’s Phase 2 and we can’t be in large groups above 5.

Nominations start from 11am

The only people who should be at Nomination Centres are candidates, their subscribers, and accredited medial personnel.

Subscribers refer to the following:

All of them must follow safe distancing guidelines, as per Ministry of Health (MOH) advice.

Do not hang out near Nomination Centres

You shouldn’t head to the Nomination Centres even if you’re a supporter — they, and members of the public, won’t be allowed in and shouldn’t gather in the vicinity either.

Needless to say, public assemblies or processions won’t be allowed either. The easiest way to break the Public Order Act is to hold up a sign in public.

Police also warn that flying drones around the area isn’t allowed, due to safety concerns.

Candidates going to 1 of 9 Nomination Centres

These are the 9 nomination centres, as well as the constituencies they’ll serve:

It should be an exciting day, although because groups theoretically aren’t supposed to mingle, it’s unlikely we’ll see any (un)friendly exchanges between opponents.

We’ll also finally get to see where all the candidates are taking part.