[UPDATE: 17 Sep] MOH has responded to the netizen’s allegations with an official statement published by The Straits Times on 16 Sep.

Here’s what they said,

The investigations have taken more time, as there were multiple allegations made by Mr Ang’s family against the nursing home. If there are any breaches to the PHMCA, MOH will take appropriate actions against the licensee of the nursing home, which could include prosecution, suspension or revocation of the licence, or a composition fine.

Orange Valley nursing home has also clarified they are aware of the 2016 case, and “empathise with the family over their loss”.

As this case happened under the previous owner KV Asia, the current management is working with MOH on providing records where available on the case. The family members have not been in touch with the Orange Valley management since SPH’s acquisition in April 2017.

A netizen took to Facebook to share a heart-wrenching tale of how his father-in-law’s life was taken “lightly” in our country.

In a lengthy post on 12 Sep, he detailed the extent of alleged mistreatment an elderly patient received at a local nursing home.

Here’s Mr Ong’s account in full, we summarise it after the jump.

Mr Ong took issue with how his father-in-law (FIL), a stroke patient, suddenly deteriorated under the care of a nursing home. 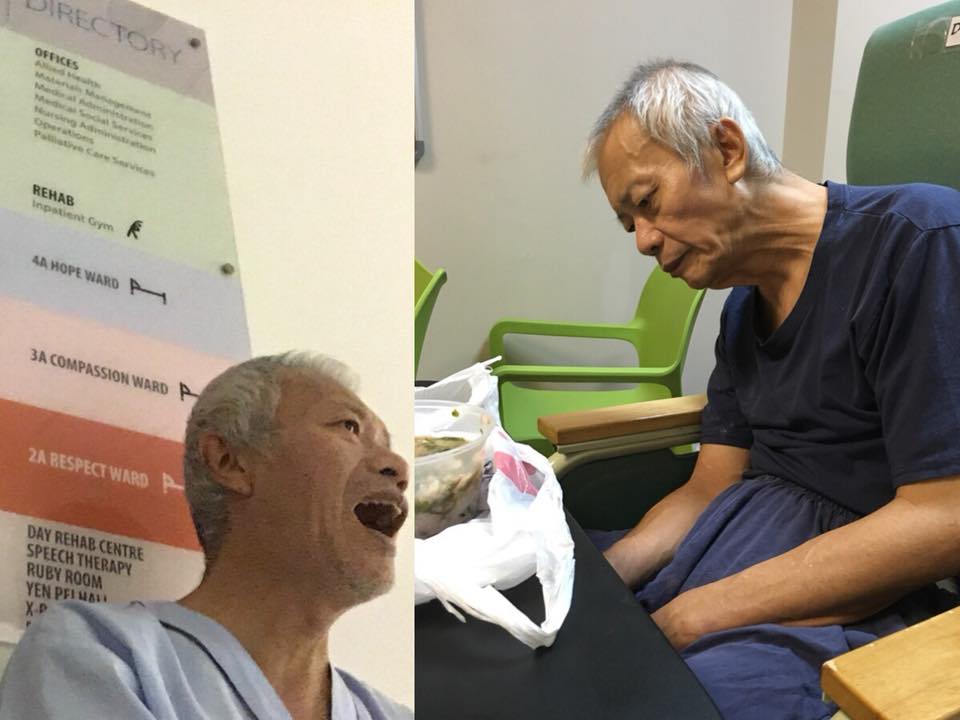 His father-in-law’s “dementia with aggressive behaviour” made it hard to continue caring for him at home. Mr Ong and his wife worked full-time, and they had a single helper to take care of 2 young children.

They made the tough call to admit his FIL on 29 Jul 2016 to a local nursing home. At which point he was still “mobile, active” and able to walk with assistance despite “multiple-conditions”.

The family took turns to visit him, but noticed he “was more tired” as the days went by. When they brought food, he would “eat up hungrily”. Curious about his behaviour, Mr Ong asked staff if he had his meals regularly.

Apparently the replies were usually that, “he always didn’t finish his food” or “he always looked tired”.

In a shocking turn of events, his FIL was rushed to the A&E only 20 days after he joined the home.

On the morning of 18 Aug 2016, he was diagnosed as being in critical condition — fully non-responsive & severely dehydrated.

His family was told to prepare for the worse, and that the case would be passed to a coroner if he didn’t make it.

Mr Ong filed reports with the Ministry of Health (MOH) and the police immediately.

As the nursing home’s “higher authority” remained uncontactable, they wrote to KV Captial which held “100% interest in the home” at that time.

The Chief Operations Officer of the home contacted them shortly after to reveal:

Offering to pay for the hospital bill and waiving the nursing home charges, the home then admitted that they were at fault in writing. For the next two years, Mr Ong’s father-in-law remained in an unresponsive state. He was non-communicative, required 100% assistance, tube-feeding and remained fully bed-bound till he breathed his last on 19 Aug 2018. The family struggled to cope with rising medical bills, and felt that their FIL had zero quality of life.

Mr Ong alleges that the police couldn’t file a case due to “its nature” — it wasn’t a criminal offense per se, but a possible act of negligence.

He says they also received “templated responses” from the Ministry of Health to “await further investigations” over the past 2 years.

To make matters worse, an MOH investigation officer allegedly told Mr Ong and his wife in an Oct 2016 interview that the “piles of files” in his officer were all “cases from more than two years ago”, and were still “pending investigations.

Through his experiences, Mr Ong hoped to raise these pertinent questions:

Most of all, he reasons that the “lack of accountability” spoke volumes about MOH’s commitment to bettering the lives of our elders.

The post has since garnered close to 800 shares, with netizens expressing sympathy for their plight.

Some have also blamed the family for leaving their father-in-law in the hands of a nursing home.

But if what Mr Ong alleges is true, we think 2 years’ worth of investigations is way too long indeed.

We can surely do better as a society to offer this family – and similar cases out there – some semblance of closure & peace. Car Speeds Away After Knocking Traffic Police Down In Geylang, 2 Men Arrested