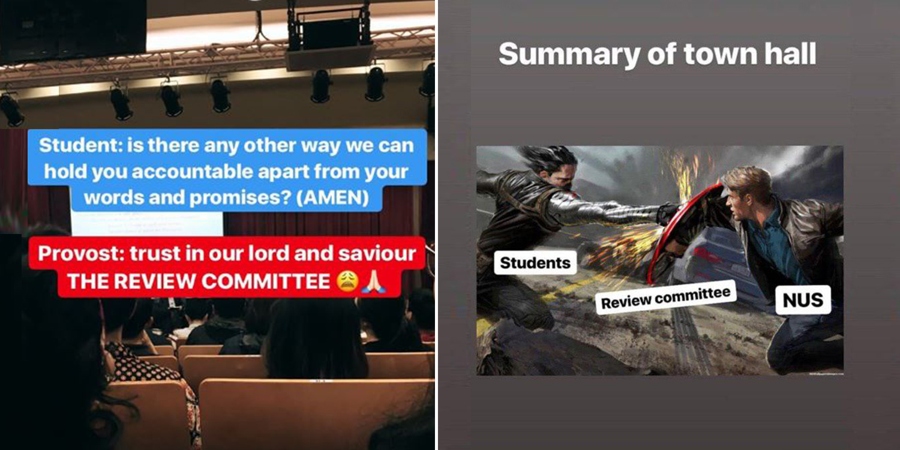 After student Ms Monica Baey took to social media to break the story of how she thought her voyeur deserved a harsher punishment for filming her in the shower, a local university soon found themselves at the centre of media maelstrom.

The National University of Singapore (NUS) called for a 1.5-hour emergency town hall on Thursday (25 Apr) at 5.00pm to address the controversy, and put to rest any further concerns the students had.

In true millennial fashion, NUS students banded together to respond to the ‘explanations’ the school offered in priceless ways — flooding Instagram with tongue-in-cheek reactions to the conference.

Here’s a teaser. But no spoilers, we promise.

In the Review Committee we trust

Although no pictures or recordings of the session were allowed, students found creative ways to express how they felt about what was being said.

Some posted live ‘commentary’ on answers to questions posed by students to the panel — which comprised of Ms Florence Ling (NUS Vice-Provost), Mr Peter Pang (Dean of Students) and Ms Celestine Chua, a university counsellor.

This Insta-story summarised the exchanges overheard at the town hall with copious amounts of wit.

Student: Provides good question/feedback
Provost: Okay we will relay this to the Review Committee. thank u next

Student: How can we ensure that the Review Committee will take our concerns into consideration?
Provost: We trust that the ReViEw CoMmitTeE will leave no stone unturned!

Student: Then why isn’t the Review Committee invited here today? (Everyone claps)
Provost: Cos it’s still being formed lol

Do take this with a pinch of salt, as we reach out to the Review Committee for comment — when they are formed of course.

There was only one thing left to do — pray. To the Review Committee that is.

Too many questions, too little time

As the ‘lengthy’ 90-minute town hall drew to a close – a runtime that will let you complete a Thanos-approved 50% of your Avengers: Endgame movie – many students walked away feeling dissatisfied with what went down.

This student felt that 1.5 hours was barely enough time to address all of the questions the cohort wished to raise. NUS also wasn’t able to extend the conference as the professors had other “commitments to attend to”.

To conclude the event, this student declared that a drinking game was now in order as the trending phrase of the day seemed to be “Review Committee”.

Jokes aside, serious points were made

Jokes aside, students reflected that although the town hall was a good conciliatory gesture by the school, they believed more could be done.

However, they appreciated that the Dean and Provost were willing to be “grilled” for 1.5 hours by students. As for whether the school would truly listen to their feedback to enact constructive change in NUS, only time will tell.

Some students also took issue with how abruptly the session ended. This account describes how a “sexual assault victim” courageously shared how she suffered from PTSD for 3 years. Unfortunately, they had run out of time for the session.

This resulted in the Provost thanking her for sharing her story and ending the town hall, before the panel left the room.

Mainstream media has covered the conference extensively, mostly focusing on the apologies made by the Provost and Dean on behalf of the school.

These were made after Ms Monica Baey – who flew back from Taiwan as she was on an exchange programme – made an impassioned plea for greater victim support at the town hall.

In Prof Ling’s own words,

I can feel that we have failed you, and I am seriously sorry.

NUS will be setting up a “victim care” unit to deal with similar cases and holding more “education workshops”.

Gen Z is a force to be reckoned with

For a roomful of 600 university students from NUS today, an honest dialogue was held and witty barbs traded over a voyeurism case that has left most Singaporeans shaken to their cores.

Some believe the victim shouldn’t have doxxed her perpetrator. Others believe that the male student deserves a harsher punishment than what our society has meted out to him.

But for what it’s worth, at least we’re talking about an issue that will no longer stay buried.

And that’s exactly how change begins. 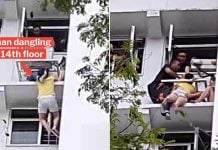 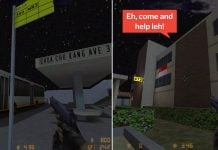 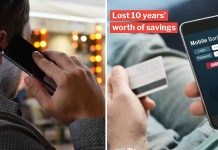 S’porean Allegedly Loses $55K Of Savings To Bank Call Scam, Daughter Warns Us To Be Vigilant