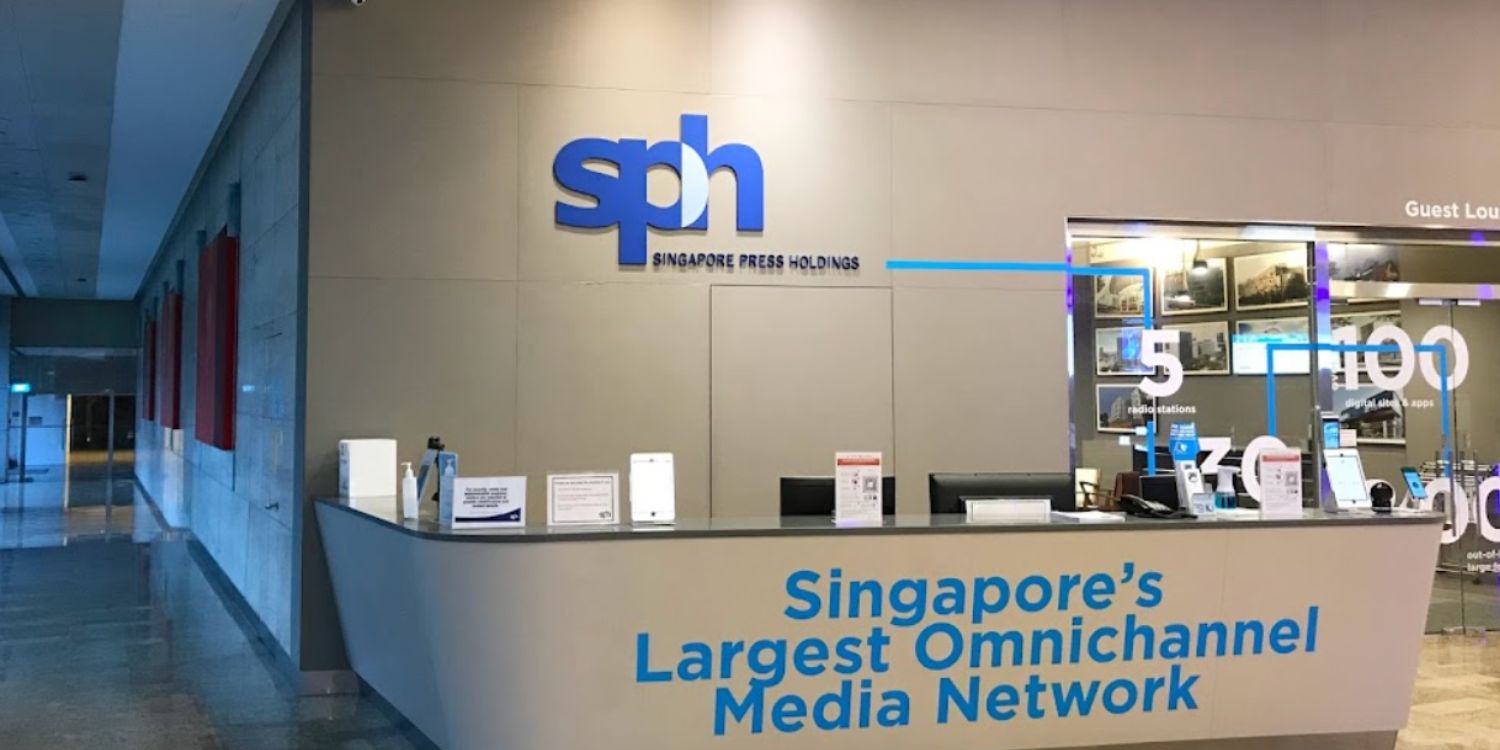 The boot is now on the other foot for SPH Media Trust.

SPH Media Is Now A Newsmaker That Needs To Answer Questions

It was drummed into me in my past life that journalists have to be harder on themselves – and the company – should bad news surface about them.

It’s a matter of principle. You have to be whiter than white if you want to operate news media worthy of trust. Some self-flagellation is called for – or how can news media presume to report on the shenanigans of other players and preach about transparency and accountability?

It’s tough to carry out. On one side is management, which wants to operate like other managements and keep the news out of sight or as low-key as possible. On the other side are editors who insist on reporting fully, placing the article prominently on the page so as not to be accused of double standards or protecting their own kind.

I have been in meetings where tables were banged because either side wanted its way. It’s no surprise that no journalist wants to report their “own” news.

But the recent news about SPH Media Trust (SMT) is not about a journalist or employee caught on the wrong side of the law or indulging in unethical practices. It strikes at the very core of journalism as well as its business practices. It demonstrates whether it has the gumption to turn the spotlight on itself, even as it puts others under the microscope on a daily basis.

In this case, it concerns the inflation of circulation/subscription figures. These are hard numbers that reflect the number of copies sold, a sign of value compared to copies that are given away for free. Such circulation revenue means people are willing to put money down to read the news, which is very difficult to persuade people to do these days.

Some people have lauded SMT for its action against three employees whom it deemed responsible for the exaggerated numbers, suggesting that it took its job of accountability seriously. After all, it is a new entity, a public trust, and should be a lot less grubby and more principled than its earlier incarnation as the publishing unit of a profit-driven publicly-listed company.

I think that they should hold their horses because the story is incomplete, full of holes, and lacks logic.

If SMT wasn’t a media organisation, it could be forgiven for its media management processes. Its journalists seemed to have failed in every way to deliver a complete news story about something that affects themselves and about themselves.

Unless journalists have forgotten how to do their jobs, I can only guess that management has thrown its weight in the newsroom, putting a stop to “value-added” reporting and deciding what should be made known to the public.

It’s silly, for example, not to name the three hapless senior executives involved in this mess who have “left or been taken to task”; they work in the same building. Nor would any journalist have accepted the phrase ‘taken to task’ from another newsmaker, especially since all three appeared to have left the building. What/who/how/why/when/where ‘taken to task’? 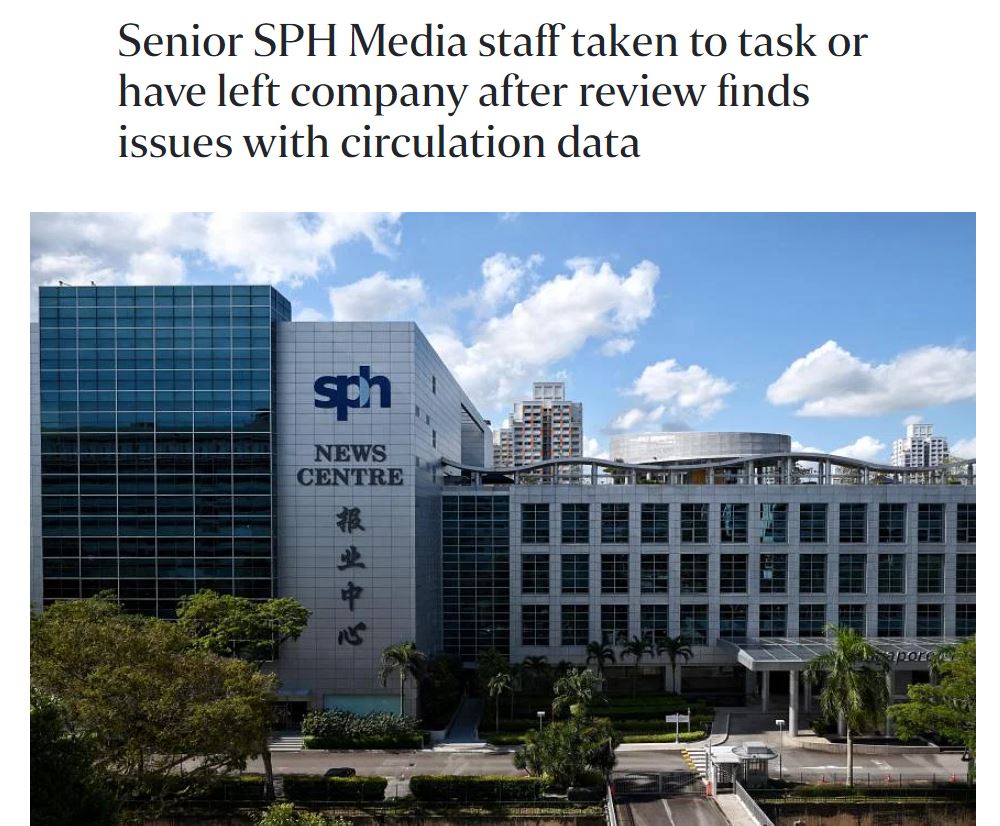 I was amused by the phrase that said the SMT was “responding to queries from ST” when it didn’t respond to other media’s questions posed much earlier in the month. So it talked to itself — and we got to read it. It’s like an agency giving a press release, no questions asked and asking for a copy-and-paste job, and getting it done.

This is the power of the media — ownself-check-ownself unless other rival media enter the picture.

Was the previous management privy to the inaccuracies?

Never mind the above, the bigger issue is what is understood by the term “circulation figures”. Who determines and audits such circulation numbers? What is the role of the Audit Bureau of Circulation? What is the industry practice?

I don’t think such background information would require journalists to go cap in hand to the management for answers. So why didn’t they?

Like many, I was gobsmacked by the thought that an established media organisation, which I used to be a part of, would resort to inflating numbers. Its audit covered only the period from September 2020 to March 2022, spanning the life of both old and new entities. No word was said about the previous years. How come?

Then a top editor, in his remarks to staff, used the phrase “historical bases that may be inaccurate”,  which gives the impression that the inflation process had been going on for a long time.

Of course, this leads to even more questions, such as whether the previous management, part of a public-listed company, was privy to these lies. Yes or no?

According to The Straits Times (ST), circulation is “a count of how many copies are distributed, whether through regular subscriptions or off-the-shelf purchase, while readership is an estimate of how many readers a publication has”. Therefore, circulation seems to refer to print copies, not digital subscriptions.

Its spokesman refined this further in the same report to say that circulation refers to “paid customer base”, in case anyone thought that complimentary copies were involved.

Would it be double-counting if a user has both print & digital subscriptions?

But there is something wrong here. SMT said that between 85,000 and 95,000 daily average copies across all titles had been inflated. It said this represents 10 to 12% of the reported daily average circulation.

This would be right if the circulation numbers include digital circulation of 462,400, according to its 2021 annual report. Print copies only amounted to 378,100. 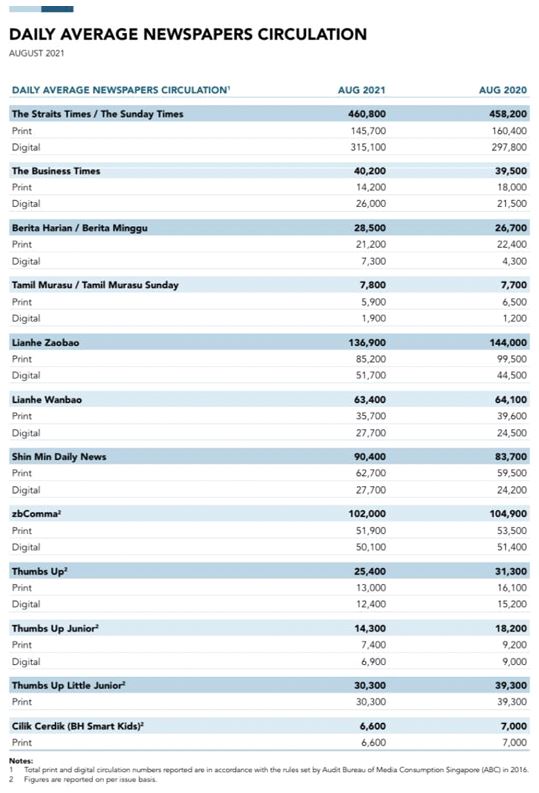 So much needs to be clarified.

What is the base figure? Which titles were inflated? Are we talking about digital circulation as well? Would it be double-counting if someone, like me, has both print and digital subscriptions? What about copies distributed through bulk buys paid for by just one sponsor? Does it matter if the copy is sold at a cover price or a steep discount? Would this be considered “paid customer base”?

One day is over, and there’s even more confusion.

Why inflate the numbers if advertising rates are not linked to circulation?

The conventional practice is for advertising rates to be tied to circulation numbers. And for readership numbers to be based on a multiple of circulation. So were ad rates raised correspondingly? What does this mean for advertisers who would have been deceived? Even ‘experts’ started talking about possible fraud.

Then SMT CEO Teo Lay Lim, probably after a barrage of emails and phone calls, wrote to advertisers to say that advertising rates were not linked to circulation. (I know for a fact that it used to be — and with penalties for the media for not meeting circulation targets.)  The readership data is not a multiple of circulation. Instead, it is data culled by AC Nielsen.

I suppose this is a better way for the company to base its ad rates in view of declining (print) circulation numbers. Also, advertisers are probably more concerned about real readers than mere buyers. SMT did not say when the change took place. So it seems those who cry foul are barking up the wrong tree since no one seems to have been short-changed.

This raises yet another set of questions:

I think the boot is now on the other foot for SMT. It is now a newsmaker which needs to answer questions. Even if its own journalists will not or cannot chase management for answers, there are enough people outside who want to know.

I would have thought a media organisation would be better prepared. It couldn’t have been so arrogant as to think that the news would not come out simply because it gags its staff. Now that it has been exposed, it looks so out of touch as not to expect the comments and queries that are bound to surface.

What we have is more confusion than clarity. It is tying itself in knots.

Coming out front first late last month or early this month would have given SMT a chance to display itself as a public entity — transparent and unafraid to change the norms or uncover past misdeeds. Instead, its opacity has done as much damage as its declaration of inflated numbers.