Our homes are safe spaces where we let our guard down and unwind. But sometimes, unexpected – and potentially dangerous incidents – could also occur.

On Sunday (23 Jan), a Tampines resident took to Facebook to share an incident where her flat’s floor tiles shattered right in front of his young toddler.

The tiles, which occupied a sizeable floor area, appeared to have popped and cracked. Thankfully, nobody was injured.

Subsequently, the man lodged a report with the Housing Development Board (HDB). Later, an officer came to inspect the damages and helped arrange housekeeping to clear the mess.

Saturday (22 Jan) started as an ordinary evening, with the man’s toddler sitting in a stroller beside his playpen in the living room of the flat.

However, at about 7.34pm, loud crackling noises can be heard in the flat located along Tampines Street 45.

As the noise continued, an elderly lady could be seen looking around the flat for the source of the noise. Suddenly, the tiles right in front of the toddler popped and cracked with a loud clang, startling him in the process.

Floor tiles nearer to what appears to be the living area of the flat ended up cracked too.

The elderly lady hurriedly got hold of the toddler in the stroller and wheeled him away.

As the child’s mother walked into the living room and assessed the damage, she could be heard exclaiming, “Oh my God”. 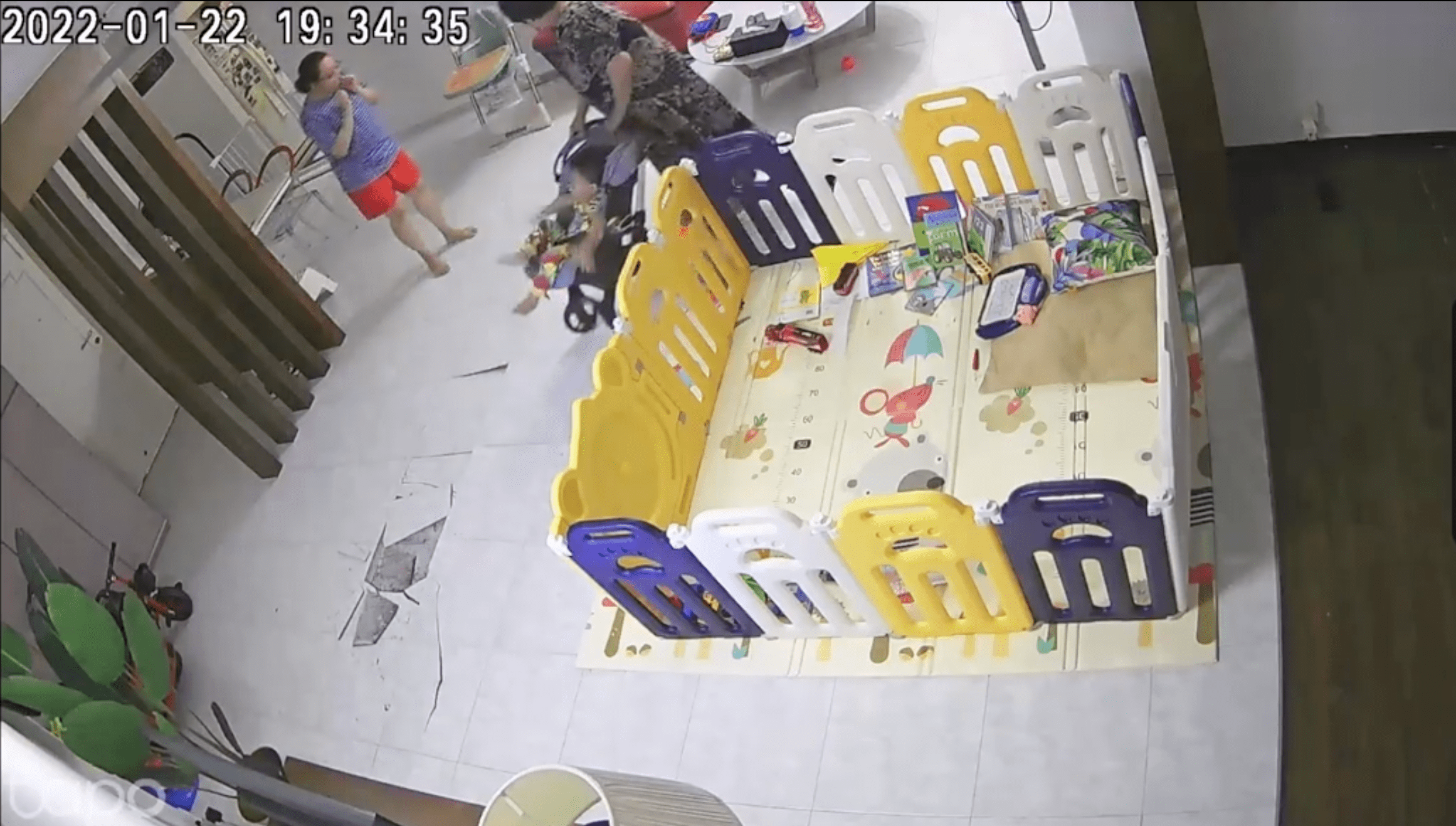 The family then hurriedly evacuated the flat.

They decided to take the necessary precaution by vacating their home. They waited at the void deck for about 30 minutes before returning home.

According to the post, the ‘explosion’ was so loud that the neighbours heard it too. However, the OP’s unit was apparently the only one affected.

The next day, the family contacted the Essential Maintenance Service Unit (EMSU) but were directed to HDB instead.

In an update on Monday (24 Jan), the resident shared that HDB is not liable for the damages as they purchased the resale flat in the open market.

He added that when they bought the now 25-year-old flat back in 2017, they did minimal renovations and were advised not to change the floor tiles as they were in an acceptable condition.

The family has since lodged a report to HDB.

Sometime after 11.20am on 24 Jan, an HDB maintenance officer arrived to inspect their flat. 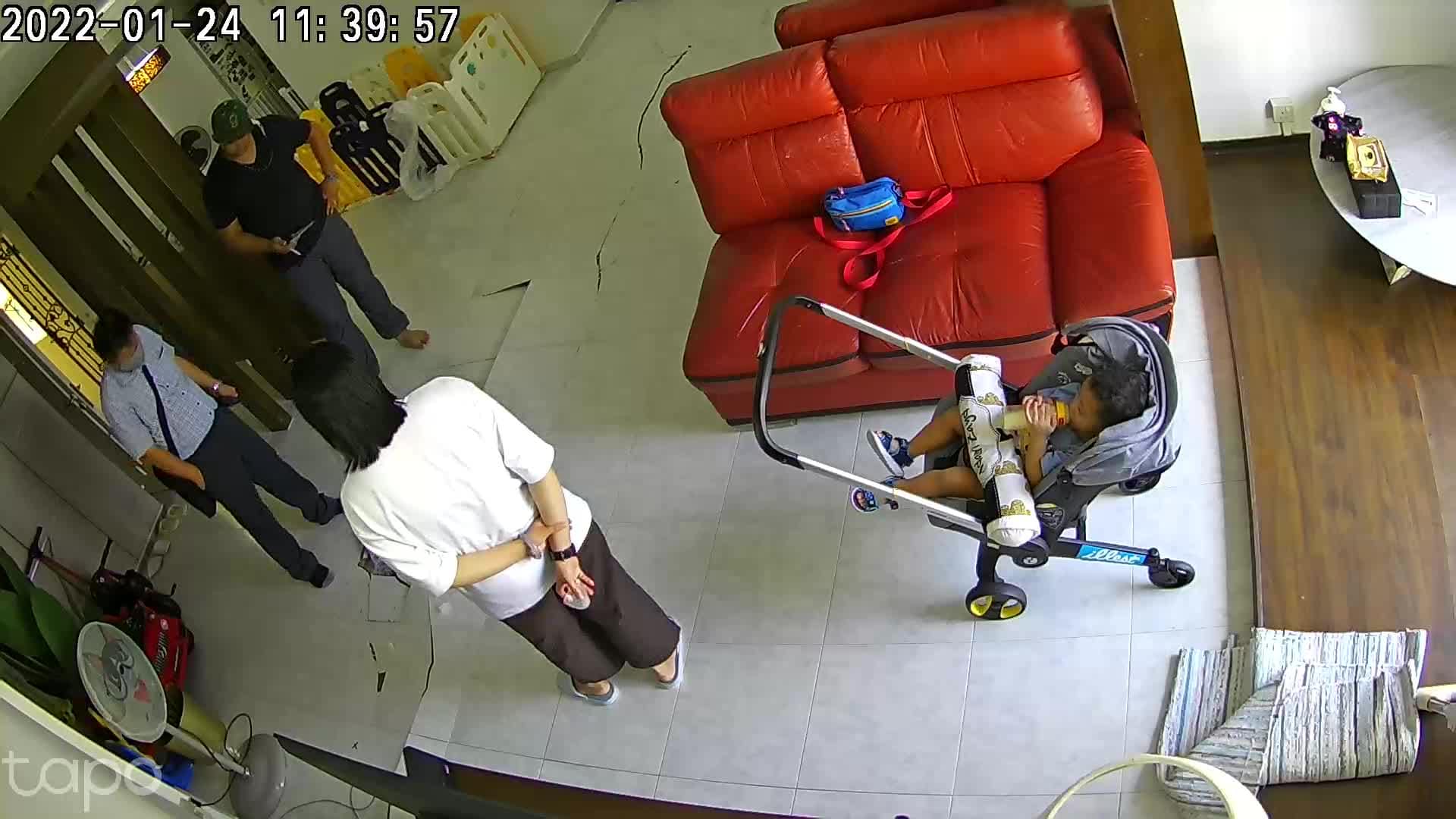 The resident shared that the officer took down details of when the flat was purchased, inspected and took pictures of the affected area, and explained the probable causes.

Out of goodwill, the officer also arranged housekeeping from the HDB Tampines branch to help clear and ensure the affected area was well protected, especially since they have a toddler at home.

Man advises others to get floors checked

The resident then shared what he learned through this experience.

He advised those moving into a resale flat to get the floors checked by a qualified building surveyor.

The man advised that it’s also best to get home insurance and the necessary insurance to cover such accidents.

He added that if anyone encounters such an incident, they should try to stay off the floor and ensure they are not stepping on the tiles once they hear the warning sounds.

Could be caused by weather or humidity

While not common, this is certainly not the first of such incidents in Singapore.

According to Channel NewsAsia (CNA), HDB received about 2,000 complaints of such cases back in 2017.

This phenomenon could be caused by several factors, including chilly weather, humidity, poor workmanship, or wear and tear.

HDB advised that if residents encounter dislodged tiles, they should move the affected tiles to a safe area and cover the area with cardboard for safety.

They added that residents who need advice on repair works can contact their hotline.

Glad nobody was injured

To have one’s floor tiles ‘explode’ and crack out without warning can be a frightening experience.

While it’s certainly a close call, we’re glad nobody was injured as a result of this incident.

But if there’s anything we can learn from this incident, it’s undoubtedly the importance of regular checks to ensure our homes remain in good condition.