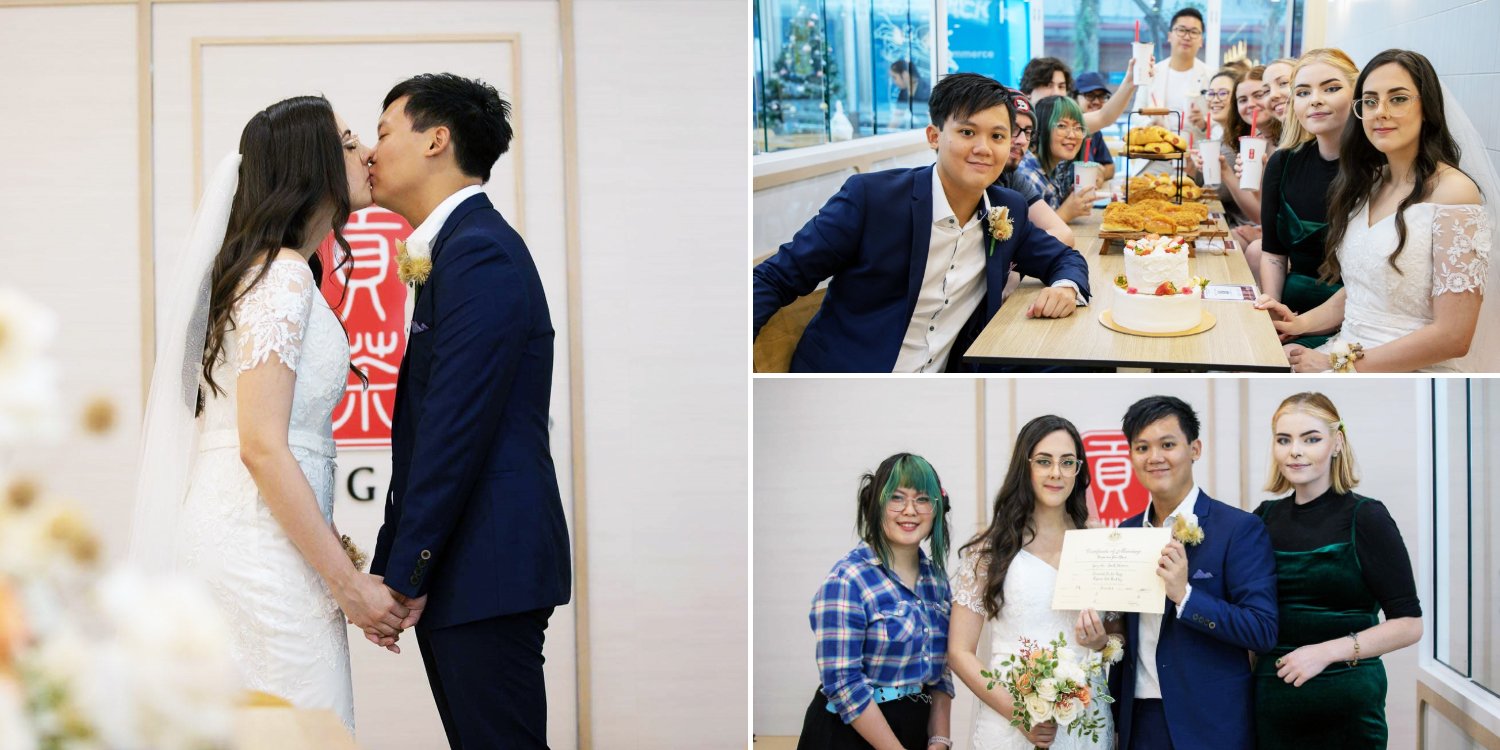 How much do you love Gong Cha? Yes.

People often expect weddings to be lavish affairs, where the bride and groom would walk into a massive ballroom filled with guests and romantic music. And where good food is served all night long.

Sadly, the pandemic has forced many couples to reconsider their wedding reception plans.

One Singaporean man in Australia recently taught us that there’s beauty in simplicity after he tied the knot with his sweetheart at a bubble tea outlet in Brisbane. 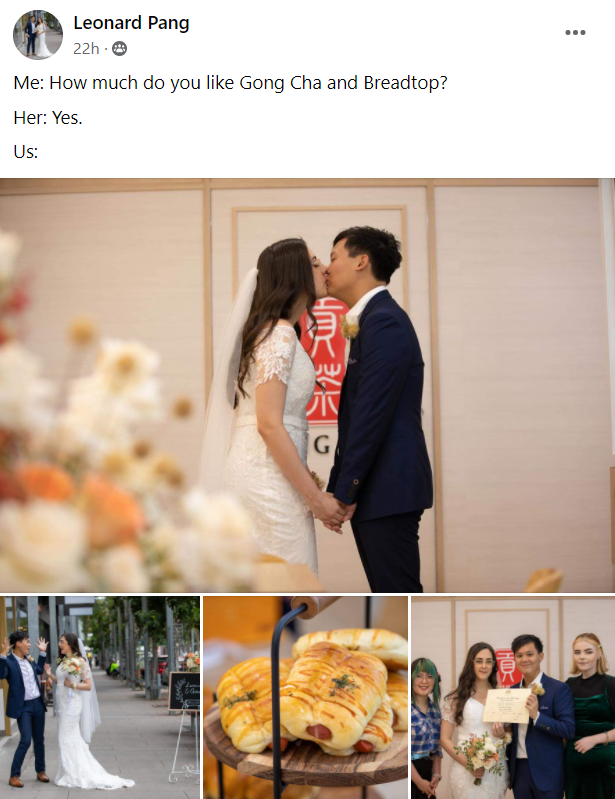 His small party of 9 gathered for the special occasion at Gong Cha and tucked into modest delicacies like bread and bubble tea.

Here’s a glimpse of the couple’s special day on 8 Dec.

Gong Cha was one of the couple’s regular paktor spots

Speaking to MS News, Leonard Pang said he and his wife Gina, 22, wanted a small, low-key wedding ceremony because his family couldn’t visit due to Covid-19 travel restrictions.

With not much at stake, we were thinking “Why not?” when we decided to get married at a Gong Cha outlet.

The 25-year-old videographer, currently based in Brisbane, Australia, shared that Gong Cha has a special place in his heart because it was one of his regular paktor spots with Gina. They made many fond memories there. “We asked for permission, and the store said yes. We were super excited,” he said.

Leonard and Gina happily tied the knot on 8 Dec, with the registration of marriage (ROM) taking place at the Gong Cha store.

Rising bright and early for their special day, they: 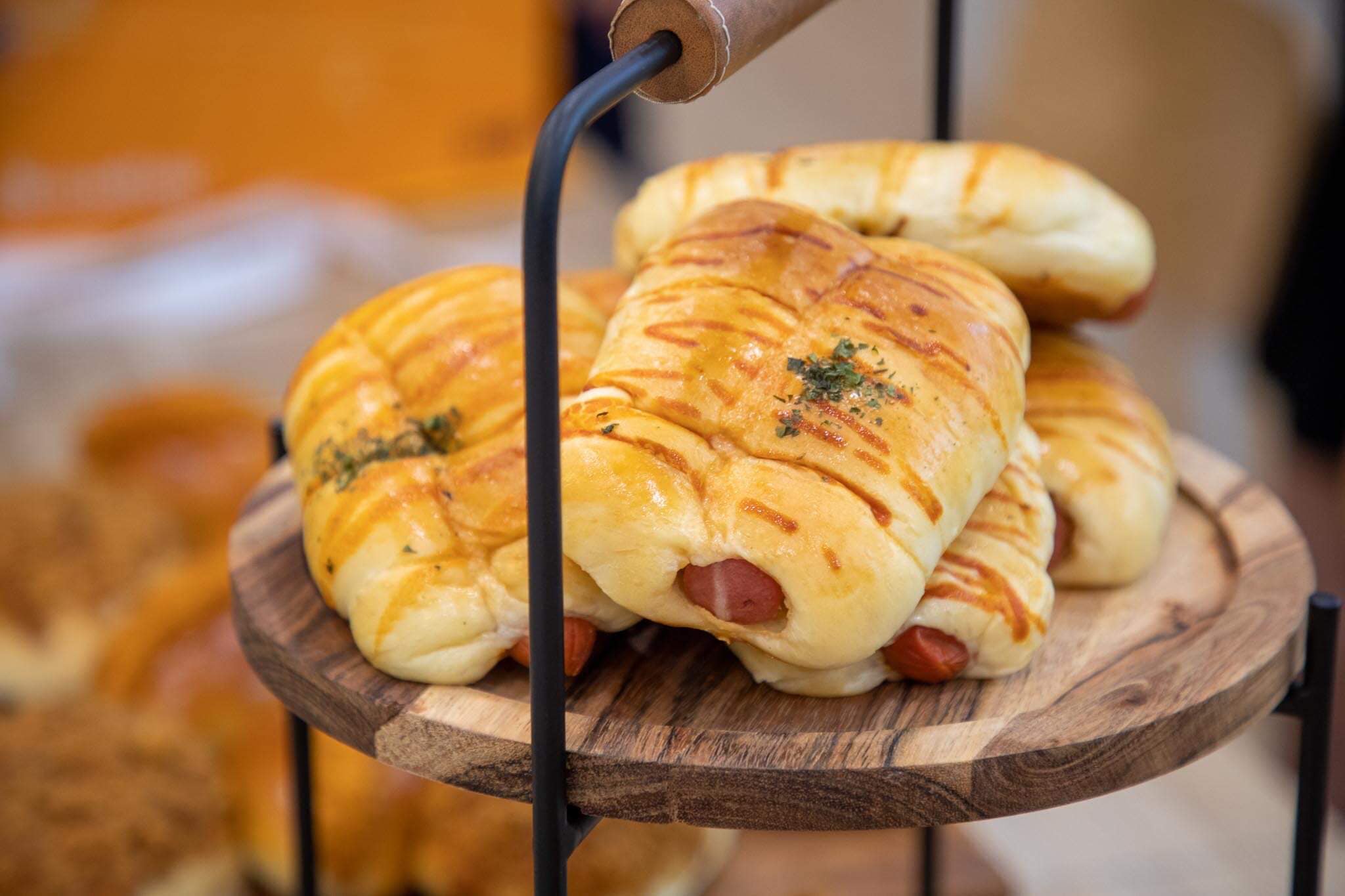 Everything happened on the same day—the recital of their vows, the signing of the witnesses, and the mandatory celebratory feast.

The wedding was relatively stress-free

Leonard said the event lasted about 2 hours as their guests helped themselves to bread and Gong Cha bubble tea. 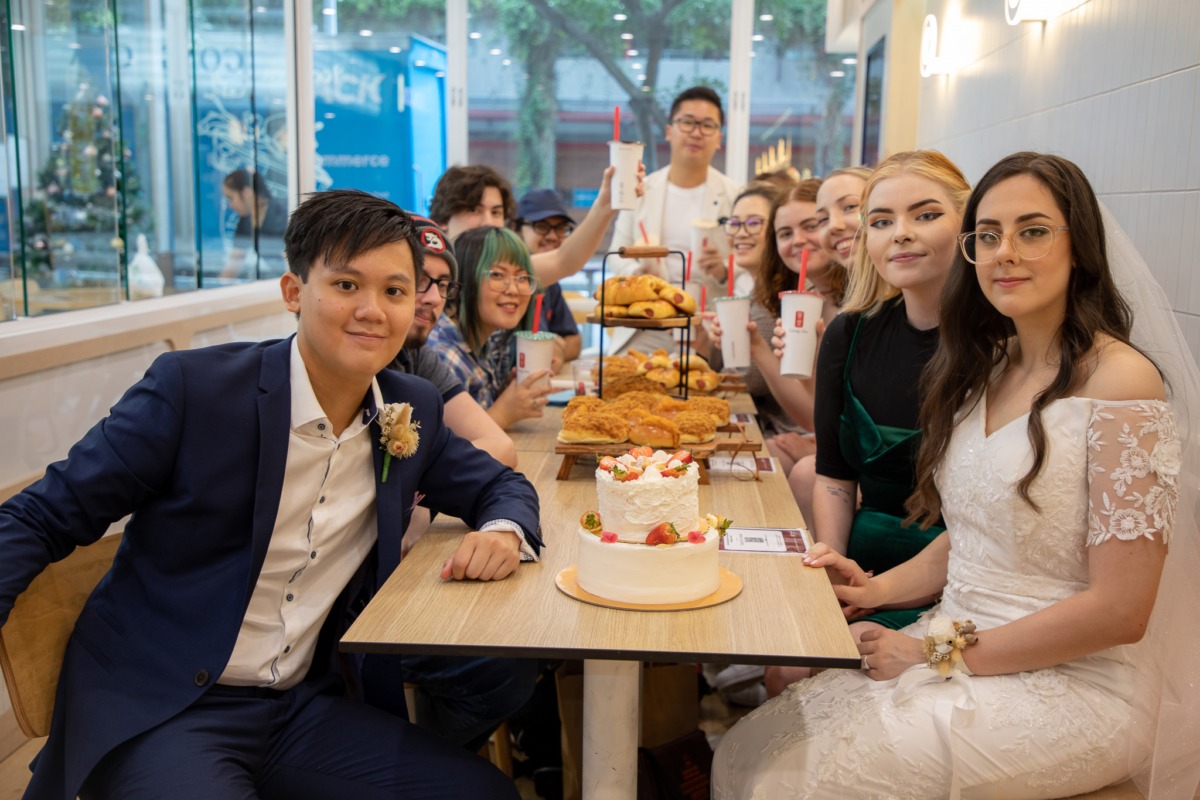 Most couples may seek professional photography services to immortalise this once-in-a-lifetime event. But Leonard entrusted this sacred task to one of his friends, who took many beautiful photos of the wedding, like this one. The entire wedding proceeded smoothly, with Leonard remarking that it was relatively stress-free.

Some of my friends and co-workers were surprised to see how calm we were in the days leading up to the wedding.

Will host another reception when he returns to Singapore

Although Leonard grew up in Singapore, he moved to Brisbane in 2019 to study at Griffith Film School. There, he met Gina through events held by the student accommodation shortly after moving in.

Although he feels it’s quite a shame that his family couldn’t be a part of his wedding, Leonard said he would most likely host another reception when he’s back in Singapore.

We feel it’s only right that my parents get to enjoy such an important event with their son.

It’s not every day that we see a couple getting married at a bubble tea store. But Leonard and Gina’s nuptials prove that we don’t need grand ballrooms and expensive hotel food to mark the occasion.

What’s most important is that we’re surrounded by the people and the things we love.