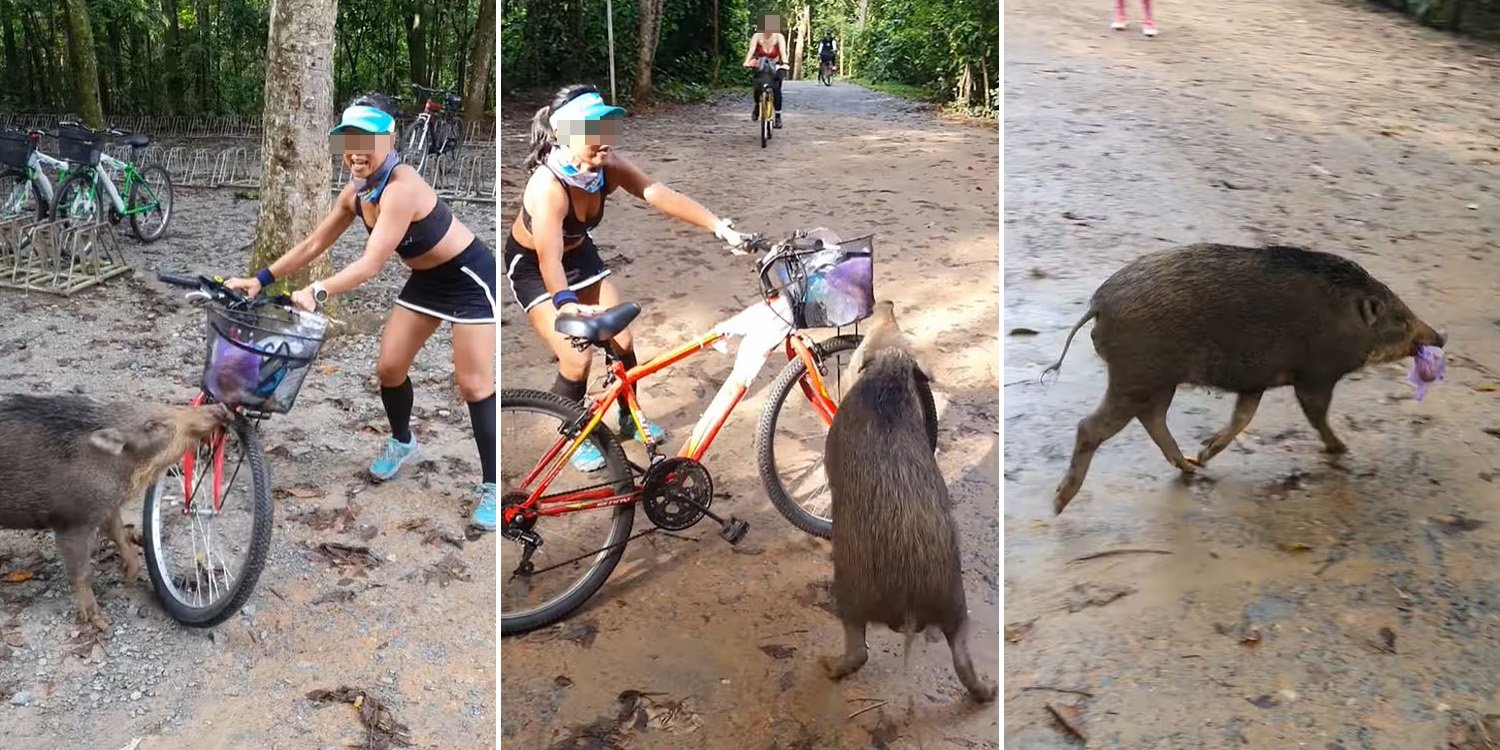 UPDATE (9pm): The woman in the video called Trisha, clarified that no one was harmed in the incident. The boar had made away with curry puffs belonging to her friend Misaki. You can read the full account below.

When going for an adventure in nature, there is often a good chance that we’ll get to see wild animals lurking about.

After all, we’re traversing into their territory, and we should be mindful of the do’s and don’ts so that we don’t attract unwanted attention.

For a woman on a cycling trip on Pulau Ubin, it looks like the scent of food from her bicycle attracted a wild boar. She was seen trying to fend off the hungry hog that won’t stop following her.

The video begins with the woman, named Trisha, who was trying to move the bicycle around, so as to prevent to curious wild boar from advancing towards her. 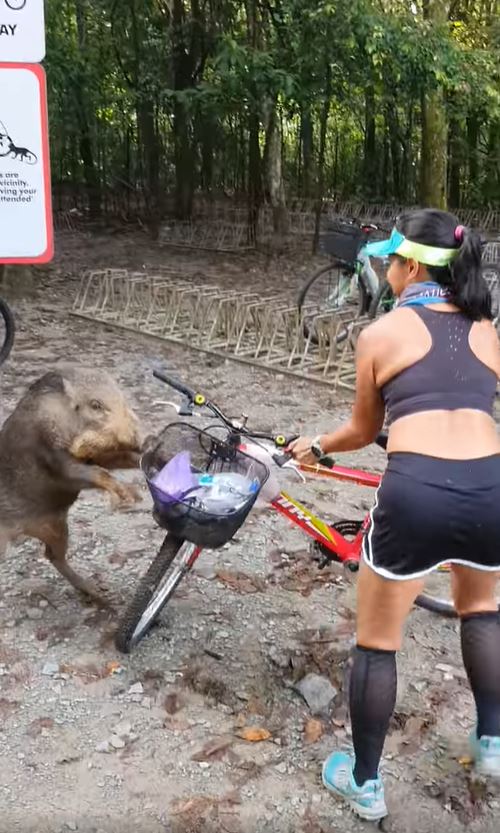 It sounds like Trisha and her friends are talking about how the wild boar was after “Misaki’s food”. 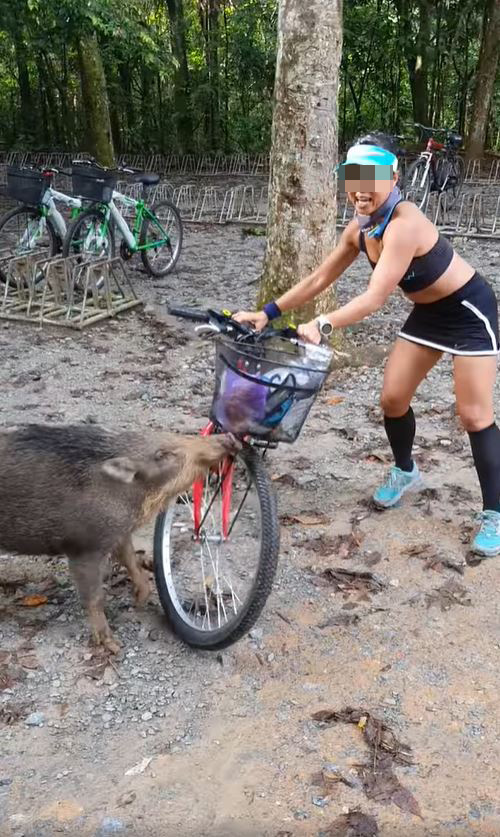 Both the woman and wild boar turn around in a circle, but that doesn’t stop the animal from getting what it wants. 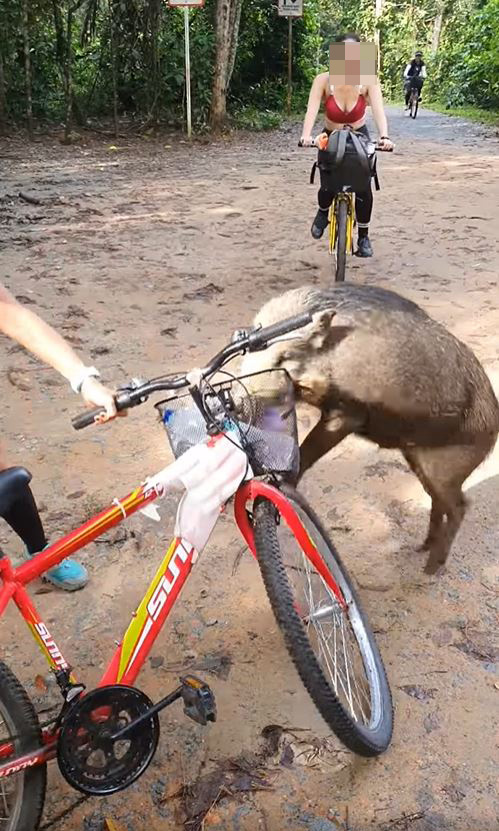 It audaciously stands on its hind legs and seizes the purple plastic bag with its mouth. Clearly, the animal has been eyeing the contents of the bag.

Dashed off with plastic bag

Once it manages to snag the bag, the wild boar quickly makes a run for it. You could tell that the plastic bag only contained remnants of food, as a couple of orange skins fell onto the ground.

And off into the forest it goes. Poor Misaki, we hope there wasn’t any precious items of hers inside the bag.

Boar made off with Misaki’s curry puffs, but no one was harmed

Within hours of her video going viral, Trisha took to Facebook to provide some context regarding the incident. 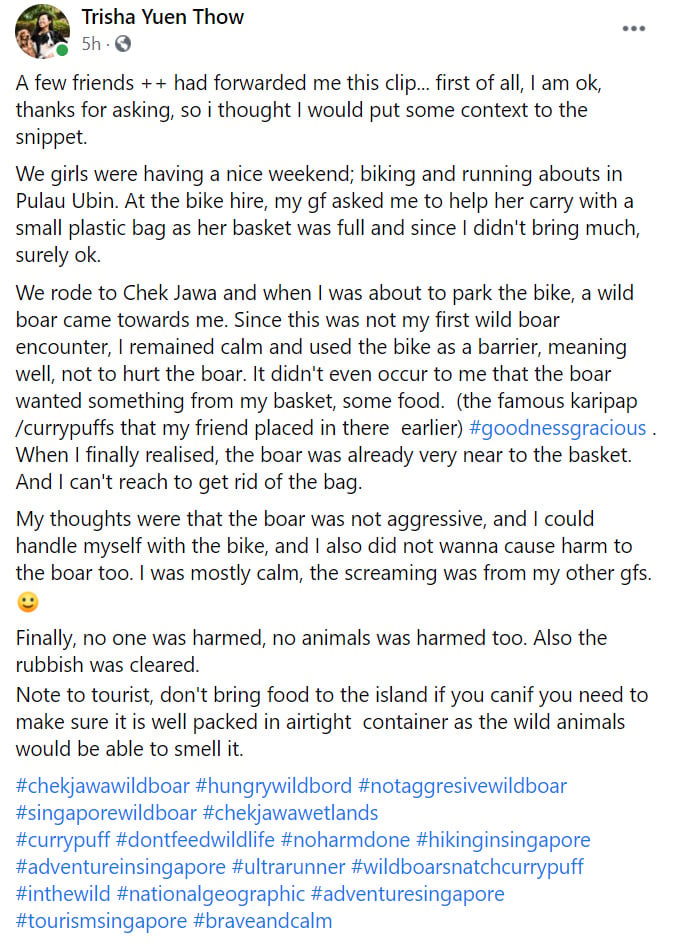 She clarified that she was unharmed, and that the clip was from her wonderful cycling trip on Pulau Ubin over the weekend.

Trisha, who runs a charity drive for animals, shared that she was simply helping her friend Misaki to carry the plastic bag containing curry puffs, as her basket was already full.

They encountered the wild boar when they reached Chek Jawa.

Since this was not my first wild boar encounter, I remained calm and used the bike as a barrier, meaning well, not to hurt the boar.

It didn’t even occur to her that the boar wanted something from her basket, some food. But when it did, it was already too late for her to get rid of it, as the boar was close to snatching the food away.

Trisha noted that no one was harmed, and that the trash has been cleared.

She advised visitors not to bring food the island, and if there’s a need for it, do pack it in airtight containers instead.

What to do when encountering wild boars

Wild boars are known to thrive on islands like Pulau Ubin and Pulau Tekong, so it pays to be careful with what you carry during your adventures there.

This is because food attracts these creatures.

When one encounters a wild boar, National Parks Board (NParks) advises to:

And if you meet adults with young piglets, it’s best to leave them alone as adults may feel the urge to protect their young.

Guard your food well in the wild

Although the group of cyclists were heard laughing about the incident, we’re relieved that the wild boar meant no harm and took off swiftly.

Wild boars can be aggressive when they’re in search of food. Sometimes, they might even attack people.

So do be careful when you’re having an outdoor adventure, guard your food well, and quickly dispose of them once you’re done.