She claims he has been uncontactable for six months.

Woman In Singapore Calls Out Cheating Husband For Neglecting Family

While getting married is a blessing, it’s also a life-changing oath that requires us to adapt to new responsibilities.

On top of being loyal to your partner, you also need to be accountable for your children if you decide to have any.

Sadly, we often hear stories of people who fail to deliver on their promises and betray their partners and offspring.

This appears to be the case for one Singaporean woman who recently exposed her cheating husband via social media. 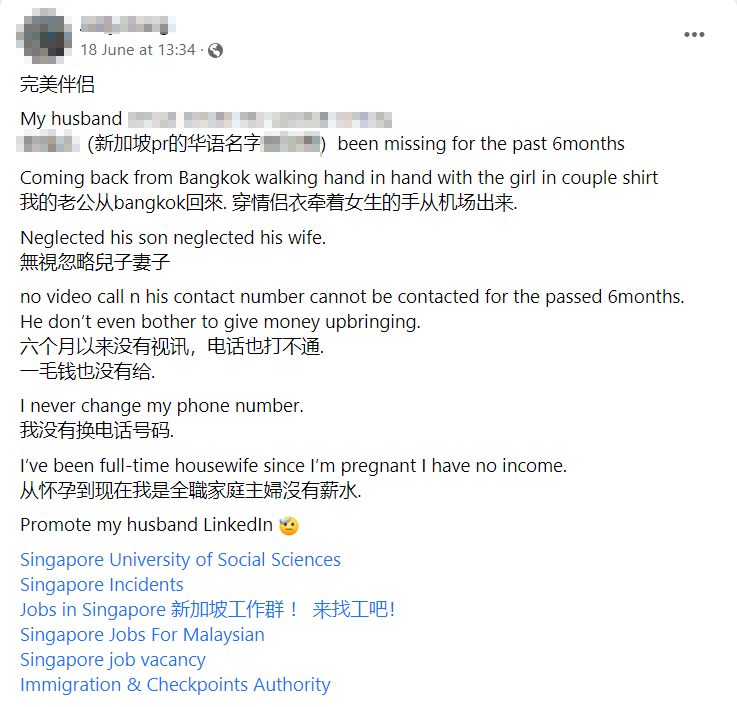 In her Facebook post, she alleges that he has been seeing another woman and neglecting her and their son after being uncontactable for six months.

Woman claims cheating husband has been missing for six months

In a Facebook post uploaded on Saturday (18 Jun), the OP put out her husband’s name and wrote he had been missing for the past half year.

According to the caption, her husband is a Chinese man with Singaporean PR status.

After being uncontactable for six months, it appears that the OP tracked her husband down at Changi Airport, who was supposedly returning from Bangkok. In an attached video, the Singaporean woman seems to have caught her husband cheating as he walks out hand-in-hand with another female dressed in matching tees.

Angered by the sight, the OP walks over to her husband and gives him a severe scolding in public.

One of the videos shows a woman dressed in black – presumably the wife – speaking angrily to her husband while a young boy stands next to her.

Given the boy’s age and what the woman was saying in her rant, he is likely their son.

As the wife confronts him, the man’s expression is mostly stony, with occasional half-hearted attempts to rebuke her. In the 30-second clip, the wronged woman talks about how she’s had to lie to their son that his father is working hard in Singapore whenever he questions where he is.

She then points out how harrowing it is for their son to instead see his father come out of the airport holding another woman’s hand.

After that, she asks him rhetorically if this is the example he wants to set as a father. 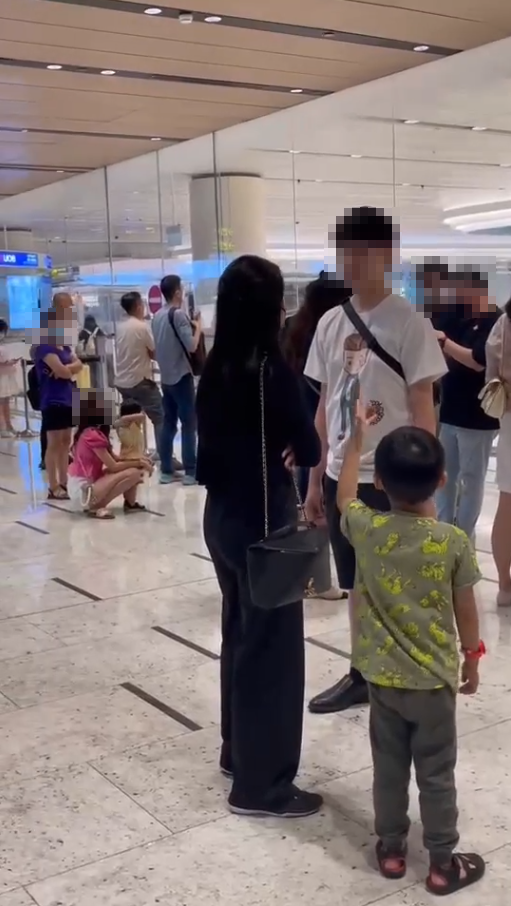 Throughout all this, their son is pointing fingers and seemingly mirroring his mother in scolding the man as if to show solidarity.

The reprimanding does not end there, with the wife revealing more details about their estrangement in the process.

In another video, she said her husband had apparently said then that he could not find a job, to which she says he could have found a job in his home country. 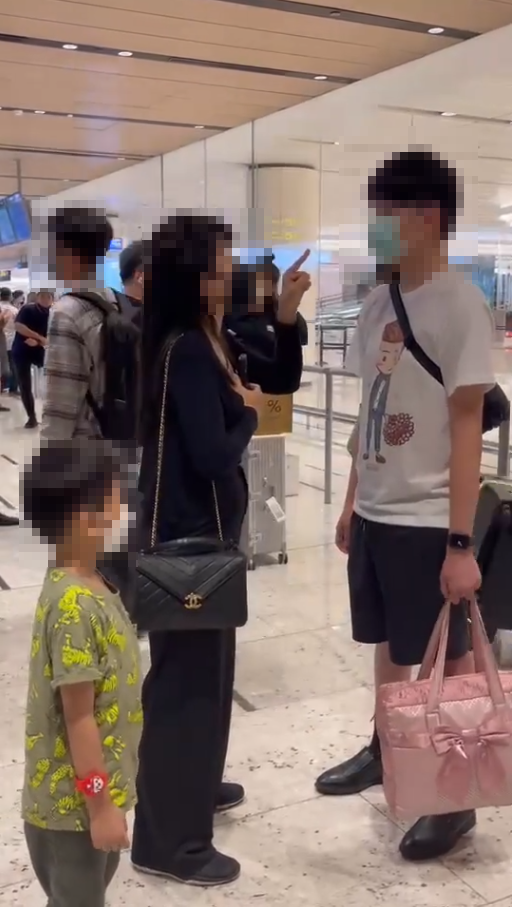 She then angrily asks him where the ‘papers’ are, possibly implying that her husband had falsely claimed to be divorced.

In a cruel twist, the OP apparently caught her husband on his birthday, as she also jeeringly wishes him a happy birthday in a separate clip.

After that, she brings up her father-in-law, who supposedly also asked his son to return to Singapore.

However, his father’s pleas were also ignored, to the point where he had to contact the OP and ask her about his whereabouts.

Alleged girlfriend walked away from the scene

In what appears to be the final part of the confrontation, a woman who is allegedly the husband’s girlfriend, steps in to retrieve her luggage.

It appears that she has changed out of the T-shirt that matched the OP’s husband. 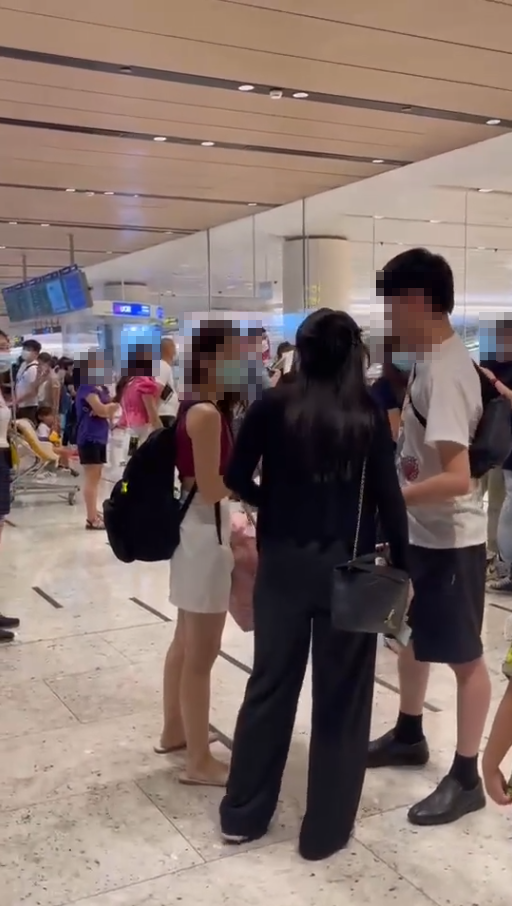 The wife looks at her and reasserts her authority by saying she is speaking to her husband before repeatedly asking her who she is.

After shooting the OP a few looks, the alleged girlfriend seems to roll her eyes, then turns on her heel and walks away.

As if the confrontation was not damning enough, the OP also posted a few audio messages that her husband supposedly sent in conversation.

In one of them, the man says he will transfer her S$11,000 so his wife can pay for an unnamed surgery.

However, the title of the audio clip indicates that she never received a single cent from her husband.

Another audio clip, sarcastically titled ‘Supportive Husband’, appears to feature an insensitive remark from the husband that it is none of his business if the OP is in pain, even if it results in her death.

Before starting a family, one should be clear about the responsibilities of being a spouse and having children.

In a family, especially for parents, every action you make directly affects your child’s future.

When a marriage falls apart, it not only damages the family’s foundation but holds lifelong repercussions for a child’s mental wellbeing.

We hope the OP can get closure from her husband so she can move on with her life and continue bringing up her son.