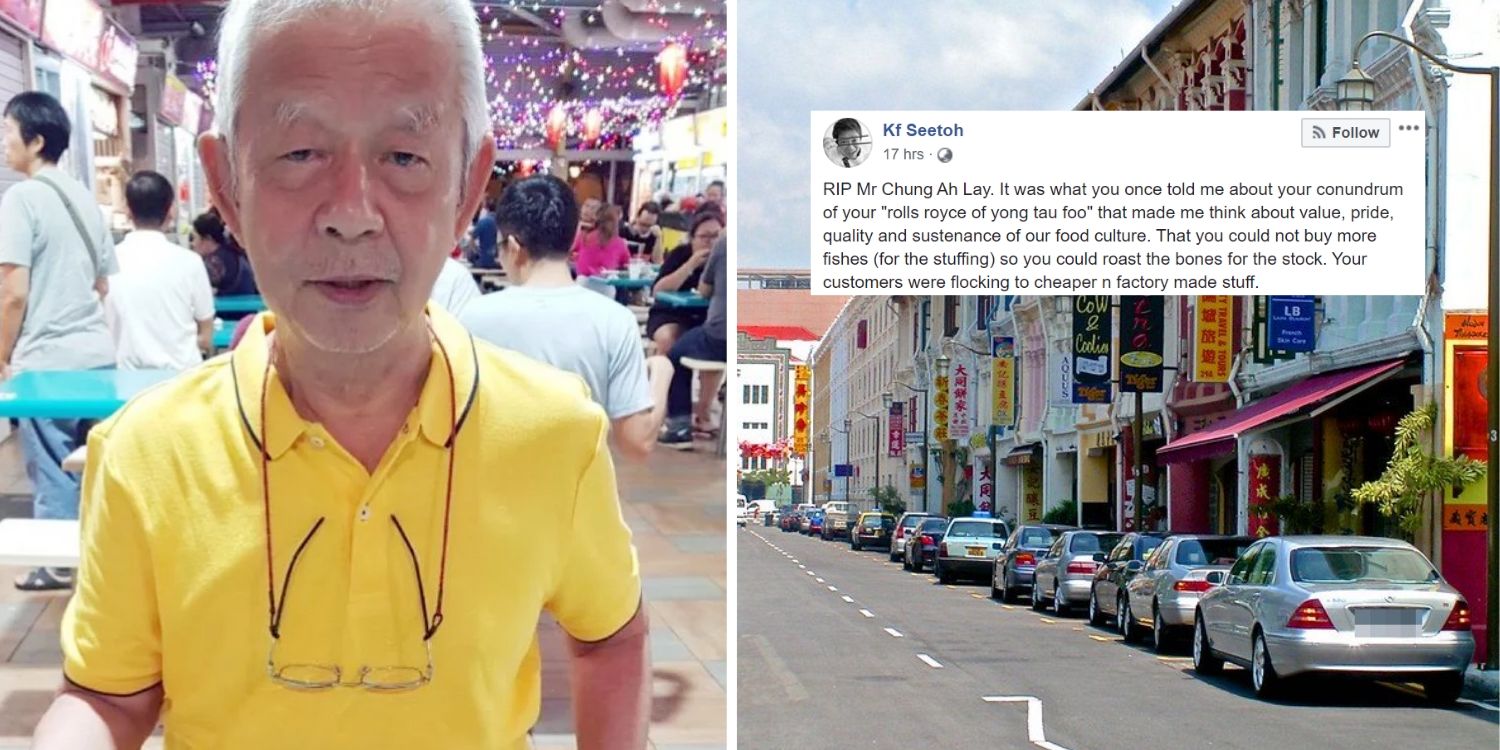 On Sunday (29 Mar), Singapore reported its 3rd death from Covid-19.

Case 109 was Mr Chung Ah Lay, 70. MS News reported on 5 Mar that his daughter was appealing for blood donations to save his life. Sadly, he passed away on Sunday.

While most media have identified Mr Chung as an employee at Fish Mart Sakuraya, food guru KF Seetoh has revealed something more interesting about him: He used to be the chef of famous Yong Tau Foo eatery Onn Kee Yong Tau Foo, formerly at Mosque Street. 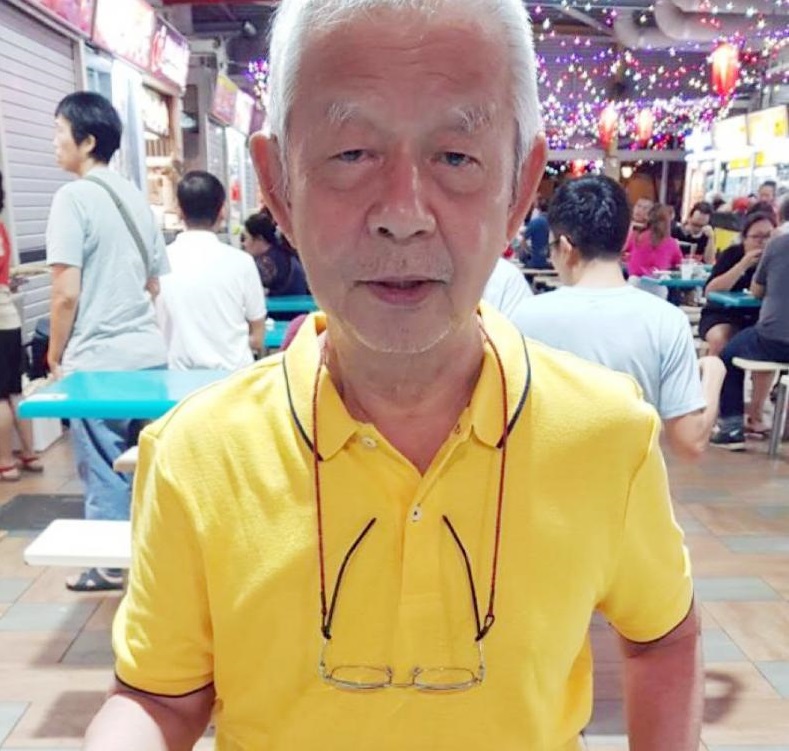 In a Facebook post on Sunday (29 Mar), Mr Seetoh revealed that Mr Chung was the chef behind the famous Onn Kee Yong Tau Foo at Mosque Street in Chinatown. 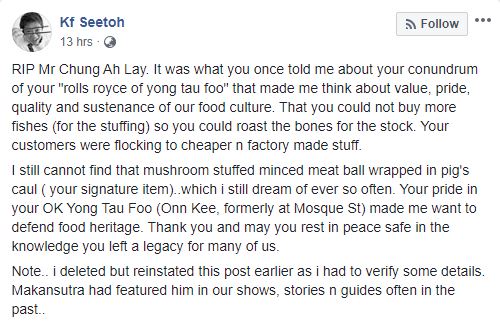 It was Mr Chung who inspired Mr Seetoh to defend Singapore’s food heritage.

In a heartfelt tribute, he shared that Mr Chung faced a conundrum where he could not buy more fishes to create stock by roast the bones.

His customers where also eating cheaper, factory-made food instead.

Calling Mr Chung’s fare the “rolls royce of Yong Tau Foo”, Mr Seetoh ostensibly meant that his Yong Tau Foo was made from quality ingredients and using skill honed over the decades. Understandably, it would have been more expensive than those serving factory-made offerings.

In a comment on his original Facebook post, Mr Seetoh gave us an idea of the price when he said 4 to 5 items would cost about $10, but he had “no regrets” in paying that price.

Mr Chung’s problems made Mr Seetoh think about Singapore’s food culture, and whether people appreciate food for its value, quality and the pride chefs take in their work.

It also made him think about whether we can sustain our local food culture. Your pride in your OK Yong Tau Foo (Onn Kee, formerly at Mosque St) made me want to defend food heritage.

Signature item is the stuff of dreams

According to Mr Seetoh, Mr Chung’s mushroom stuffed minced meat ball wrapped in pig caul was his signature item, and is the stuff of his dreams. Up till now, he has not been able to find something like it.

In a comment on his original post, Mr Seetoh said he had been eating Mr Chung’s Yong Tau Foo since the 1970s.

Searching in vain for Onn Kee

Mr Seetoh told MS News that he had been eating at Onn Kee since the 70s, and it was actually located in a coffeshop on Mosque Street. He then moved down the street in the 90s.

We tried to find out more about this famed eatery, and a search on the Internet revealed that there was an Onn Kee Yong Tau Foo at 33 Mosque Street. 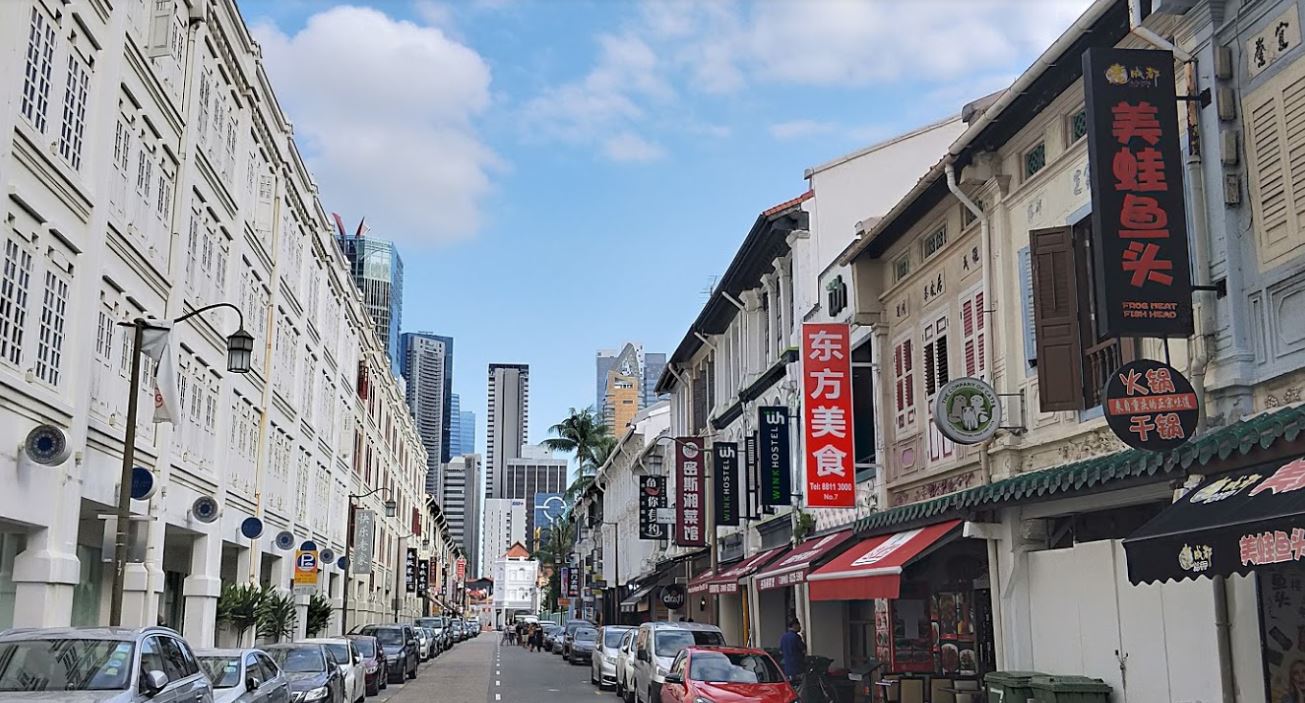 However, Mr Seetoh said the eatery closed down way back in 2009.

Besides Mr Seetoh, many other people have been searching for Onn Kee. For example, this poster on a thread in the Club Snap forum:

From what the poster said,  he had apparently been patronising the eatery for more than 30 years. He also said he really missed it:

Unfortunately, with Mr Chung gone, it looks like foodies will never be able to eat his delicious fare again.

MS News sends our condolences to Mr Chung’s family for his passing.