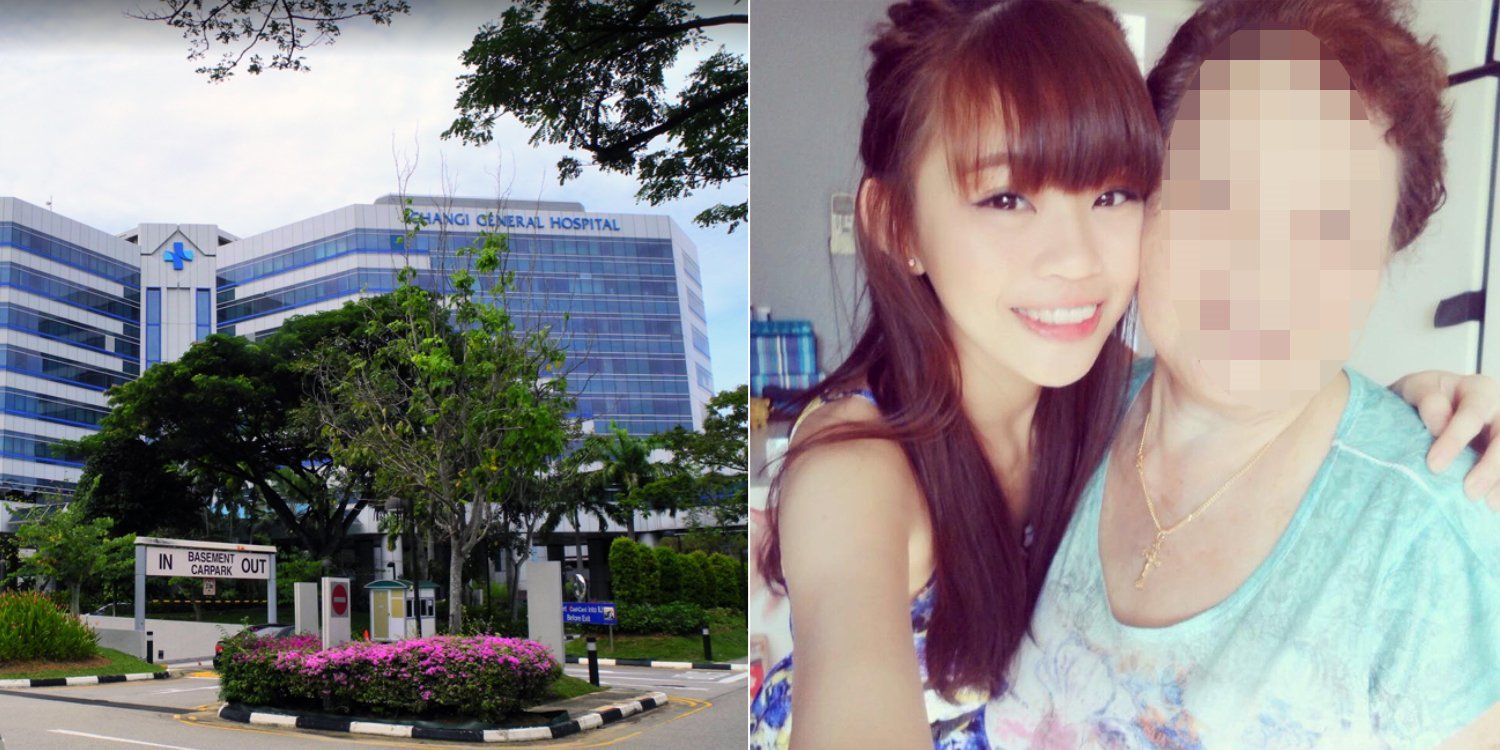 Update (16 May): Changi General Hospital (CGH) released an official statement regarding the incident on Wednesday (15 May).

In short, CGH found that there were communications gaps between its staff and the family involved which they claimed could have been avoided.

In particular, more could have been done to give the family members involved a better understanding of the “therapeutic interventions by the care team”.

CGH apologised for the anxiety caused and promised to improve on their existing care delivery processes.

The full statement can be found at the end of this article.

It’s never easy watching your loved ones suffer. Especially if they’re not given the treatment they deserve in their final hours.

A Singaporean woman, Ms Isabella Lim, took to Facebook on Monday (13 May), to share her negative experience with CGH. Particularly, about its alleged “disappointing service” when her late grandmother was warded there just before she passed on.

Here’s her post in full. Be warned, it is very long.

Grandma admitted into CGH after falling down at home

Everything started back in Feb 2019 when Isabella’s grandmother was admitted to CGH after falling down at home.

According to the post, she suffered a compression fracture and had to stay in CGH until she was “fit to go home”.

Although the family wished to bring her home ASAP, they couldn’t do so as she had contracted Urinary Tract Infection (UTI). Isabella claims her doctors were adamant on her staying until she was “completely cleared”. She was discharged only 2 months later.

But 3 days after returning home, the pain came back and she was re-admitted.

Ms Lim’s grandma had also been suffering from dementia. 2 weeks into her second stay in CGH, doctors transferred her to a dementia ward so she could have the proper care for her condition.

But things started taking a turn for the worse. Not only did her grandma’s appetite shrink, she also had regular stomachaches and even vomited blood on some occasions.

She was diagnosed with an “ischemic bowel” shortly after that, and doctors told her family that there were “no other treatment options except palliative care”. A week later, they allegedly informed the family that her grandma only had “a few weeks” left to live.

During her grandma’s stay, Isabella shares that doctors couldn’t feed her through a tube as she kept regurgitating the food. IV drips were also ruled out, due to her grandma’s edema.

Stopped going to work to care for her grandmother

The next day, a nurse on duty informed Isabella’s family that their grandma’s “vitals were going down” and told them to stay the night as there was a high chance that she would pass away.

For the next 8 days, Isabella stopped going to work and took care of her grandmother everyday from 9 in the morning to past midnight. That’s when she witnessed their supposed “unprofessional, unsympathetic and insensitive” attitudes towards her grandma.

Here’s a summary of her complaints:

1. Failed to communicate effectively with family

Isabella alleged that doctors at CGH did not inform her family that they had administered morphine to her grandmother, causing her to be unresponsive.

Isabella also alleged that the heater blanket used to keep her grandma warm during her stay was removed without the family’s permission.

When prompted about the removal, a nurse at the hospital allegedly replied,

PUT EVERY DAY GOT COST YOU KNOW??

Additionally, one night when Isabella approached her grandma’s on-call doctor to ask about her grandma’s condition, the doctor allegedly raised her hands up immediately and claimed that,

I just want to say that I don’t know ANYTHING about your grandmother.

Later that day, when Isabella approached the same doctor to ask about her grandma’s rapid heartbeat, the same doctor allegedly let out a loud sigh and whispered to another colleague next to her.

The colleague later showed up at her grandma’s ward. When Isabella asked her about her grandma’s heart rate, she allegedly told her that it “depends on God”.

Isabella also claims in her post that her family requested for a blood test to be done several times on their grandma as they wanted to verify if their grandma’s condition was stabilising.

However, the doctors allegedly refused these requests and claimed that,

The results will be the same.

4. Absence of nurses in the wards

According to her Isabella’s post, there were no nurses present in the CGH wards most of the time.

As a result, Isabella’s family often had to wait for long periods of time before receiving help from the nurses.

She also claims that the nurses at CGH lacked initiative and her family had to do everything as a result. This includes helping to open the ward’s door as there were no nurses at the reception to help.

Because of the alleged “dismal service” at CGH, Isabella’s family considered transferring her grandma to the National University Hospital (NUH) on several occasions.

However, whenever the family mentioned this to CGH doctors, she claims they denied their request on the grounds that the “doctors in the other hospital would say the same thing” or that “she would probably die on the way in the ambulance”.

On 3 May, Isabella’s family finally decided to transfer her grandma over to NUH, going against the advice given by the CGH doctors.

Isabella claimed that when NUH doctors requested to speak to their CGH counterparts to facilitate the transfer, her grandma’s primary care doctor refused to co-operate.

In addition, CGH nurses apparently refused to book an ambulance for Isabella’s grandmother’s transfer, and their family had to book one themselves.

Service was much better at NUH

When Isabella’s grandma arrived at NUH, the nurses found that she was suffering from severe bedsores.

The nurses at NUH immediately tended to the bedsores by applying necessary creams, which according to Isabella, never happened at CGH.

Isabella’s family was also given booklets and guides to help deal with the imminent passing of their loved one.

NUH nurses also conducted frequent checks on Isabella’s grandma every 1 to 3 hours. She claims this was in stark contrast to the service they received back in CGH.

Some of the CGH nurses could still joke and laugh with each other while they were changing her diapers.

Isabella found NUH staff to be kinder and more respectful towards her family and grandma.

In particular, she was especially touched by how NUH staff treated her grandma with the same “respect and dignity” they showed normal patients, even though she was nearing her final days.

Isabella’s grandmother eventually passed away on 5 May.

On Wednesday (15 May), CGH issued an official statement addressing the alleged poor service.

In short, CGH identified communication gaps between its staff and the family members involved which they claimed could have been prevented.

They also apologised for the anxiety caused to the family and promised to improve on their existing “care delivery processes”.

We are saddened by the news of the patient’s passing and empathise with the family’s anguish.

The patient was admitted to CGH on 7 April 2019 and transferred to NUH on 3 May 2019. Following the family’s feedback, CGH Medical Board conducted a thorough review of the case. Appropriate medical care was given during her stay at CGH. However, there were communication gaps which could have been prevented. While the care team provided regular updates to the family member designated as main caregiver, we could have done better in engaging the different family members and helping them understand the diagnostic and therapeutic interventions by the care team.

During the patient’s stay at CGH, she did not respond to the antibiotics treatment due to pre-existing conditions and advanced age, and required invasive procedures for further investigation. The care team explained the treatment options and risks involved to the family and they agreed on conservative treatment that focused on alleviating symptoms that caused discomfort to the patient. The patient was assessed to be at risk of developing pressure sores. We promptly took preventive measures which included close monitoring of her skin condition, placing her on a pressure-relieving air mattress and turning her at regular intervals to prevent pressure sores from developing while respecting the request from family members to minimise disrupting her rest.

During a subsequent family meeting, the family asked about the process to seek a second opinion at another hospital. The high risks associated with a hospital transfer due to the patient’s condition, was highlighted. The family decided to proceed with the transfer and the care team facilitated with a doctor’s letter to NUH Emergency Department to enable continuity of care.

We are sorry for the anxiety caused to the family. Owing to patient confidentiality, it would be more appropriate for us to meet with the family to address their concerns, and provide full details of the case. We will do our best to learn from this incident and improve our care delivery processes.

Our sincerest condolences to Isabella and her family. We’re sure that their beloved popo is in a better place now.