There are speed limits for cyclists too.

Cyclist Fined $300 For Cycling At 27km/h At Rail Corridor

Cyclists love to let loose at park connectors (PCN) where they can safely ride at fast speeds. However, unbeknownst to some, there are actually speed limits at certain parts of these PCNs as well as the Rail Corridor to ensure the space is safe for all, including pedestrians.

One cyclist learnt this the hard way when he was fined $300 for speeding on the Rail Corridor (South) footpath.

He later shared the notice of offence issued by the National Parks Board (NParks) on Facebook so cyclists will be aware of the regulations there.

On Wednesday (27 Oct), a cyclist took to SG PCN Cyclist Facebook group to share that he was issued a fine of $300 by NParks on 22 Oct. 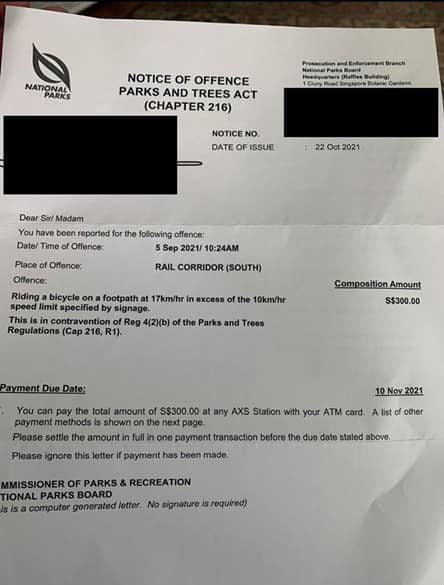 According to the letter shared, he was caught cycling at 27km/h on the Rail Corridor on 5 Sep morning.

This was 17km/h over the speed limit of 10km/h specified by signage in the area.

NParks stated that this contravened Parks and Trees Regulations.

Specifically, regulations prohibit individuals from carrying on with an activity deemed to endanger or inconvenience other users of the park when a notice has been displayed.

One helpful netizen added that NParks has reminded cyclists to slow down and dismount when necessary due to narrow paths and high human traffic at the Rail Corridor.

He shared that this is enforced due to errant cyclists speeding among crowds.

The netizen also referenced a letter by NParks and the Urban Redevelopment Authority (URA) reminding cyclists to ride safely and look out for others along the Rail Corridor.

Ordinarily, he said, PCNs have a speed limit of 25km/h.

However, there are occasional signs showing speed limits, and cyclists are legally bound to comply with the limits.

Here is one such sign along the Rail Corridor. 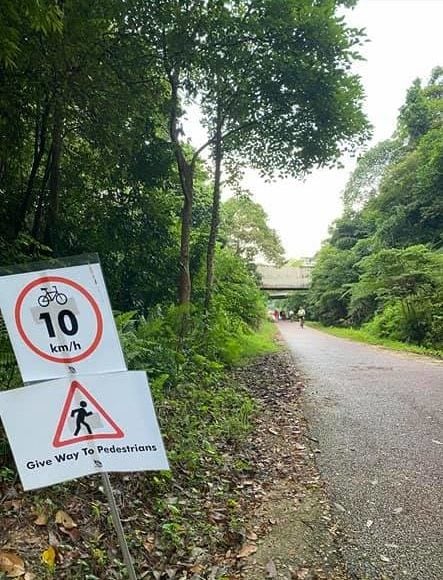 Failing to abide by such signs will earn you a fine like the cyclist.

Netizens had mixed reactions to the regulations.

Some felt like it needs to be revised, saying the speed limit was too low considering runners can exceed it too.

However, many supported such enforcement efforts, saying it is irresponsible to ride fast at the Rail Corridor as there are many hikers.

This netizen also urged the cyclist to ride safely, especially further down the Rail Corridor where many elderly residents also use the same path.

Parks are for all to enjoy

It might be frustrating for cyclists to have to slow down at certain parts of their journey.

However, this is necessary to ensure the safety of everyone — from cyclists to joggers and hikers.

After all, parks and spaces like the Rail Corridor are for all to enjoy.