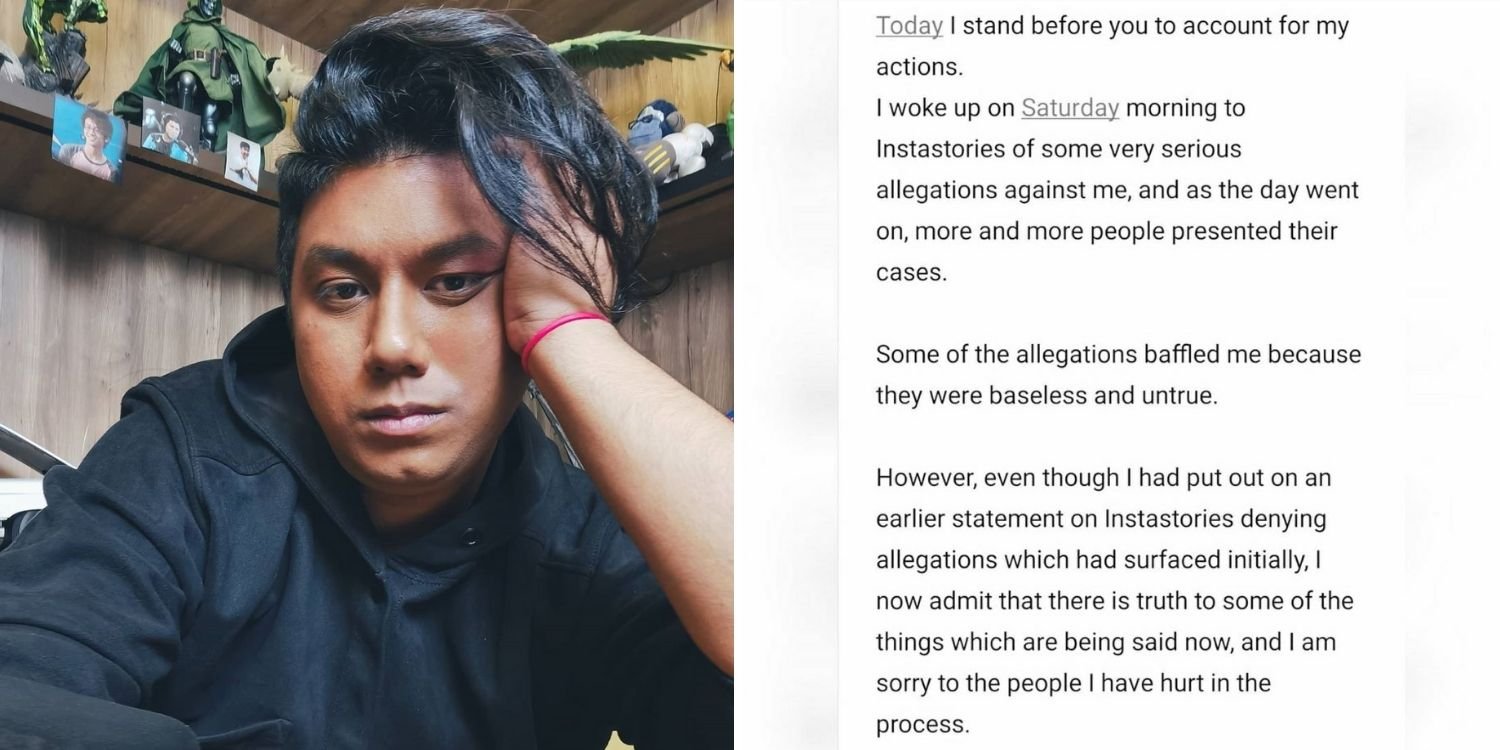 He admitted some texts were questionable.

In the current era of social media and citizen journalism, news and commentaries spread like wildfire, so much so that people are at risk of immediate destruction if they don’t stomp out the flames.

At the center of the latest saga is local radio DJ and YouTuber Dee Kosh, who has become the subject of sexual harassment allegations after netizens shared screenshots of inappropriate texts between him and various young men. After keeping mum for over 2 days, he has finally broken the silence with a lengthy Instagram apology.

Jumping straight to the issue at hand, Dee Kosh starts by clearly stating his intention to “account for [his] actions.” 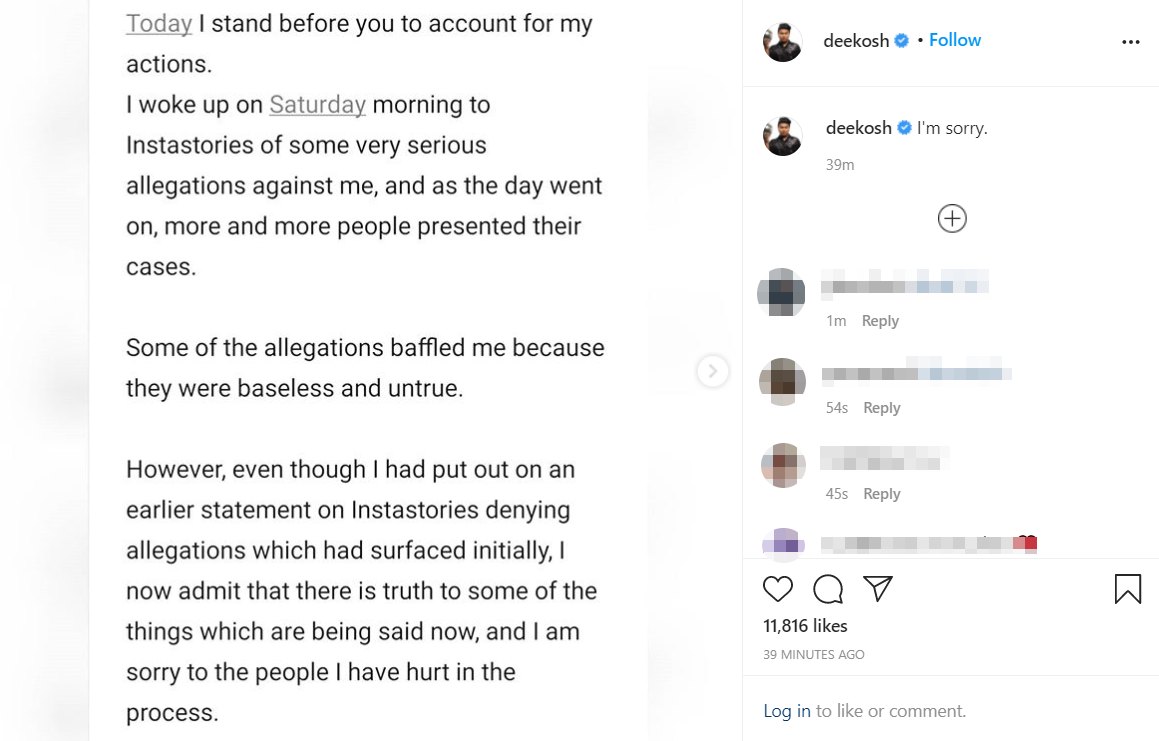 In his post late Monday (17 Aug) night, he distinguishes between the posts he claims contain some truth and those that are “baseless and untrue.”

On the topic of sexual advances, he simply states that he checks the person’s age before proposing intimacy to ensure that “it’s between two consenting adults”. He then goes on to talk about the texts between him and a 15-year-old boy, which he insists was purely friendly. 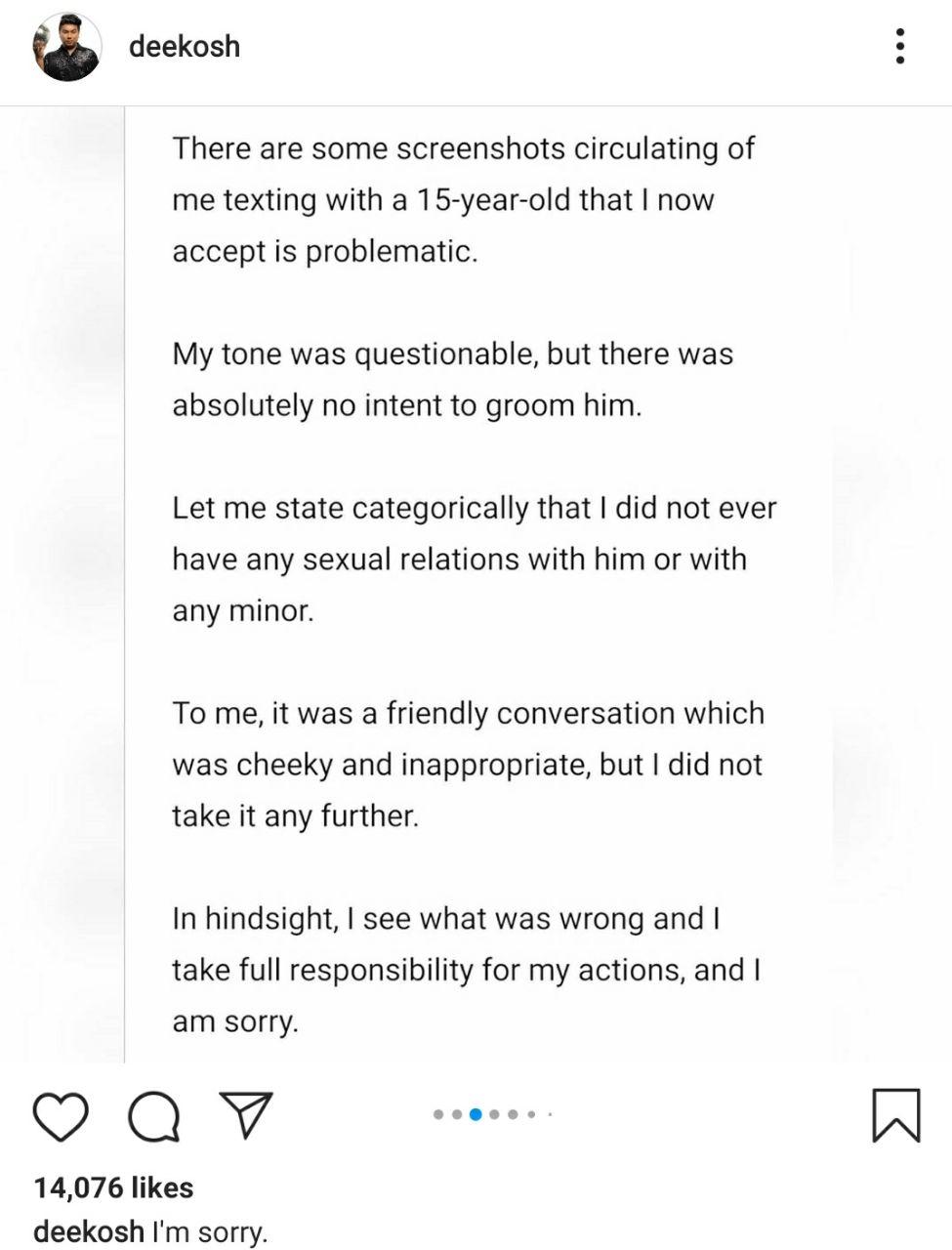 Unfortunately, he recognises the “cheeky and inappropriate” tone he used which had sent the wrong message, and takes full responsibility for the mistake.

Dee Kosh adds that nothing happened beyond the texts, and he had no intention of grooming the teen.

Regarding accusations of him using talent scouting as a guise for procuring sex, Dee Kosh vehemently denies them. 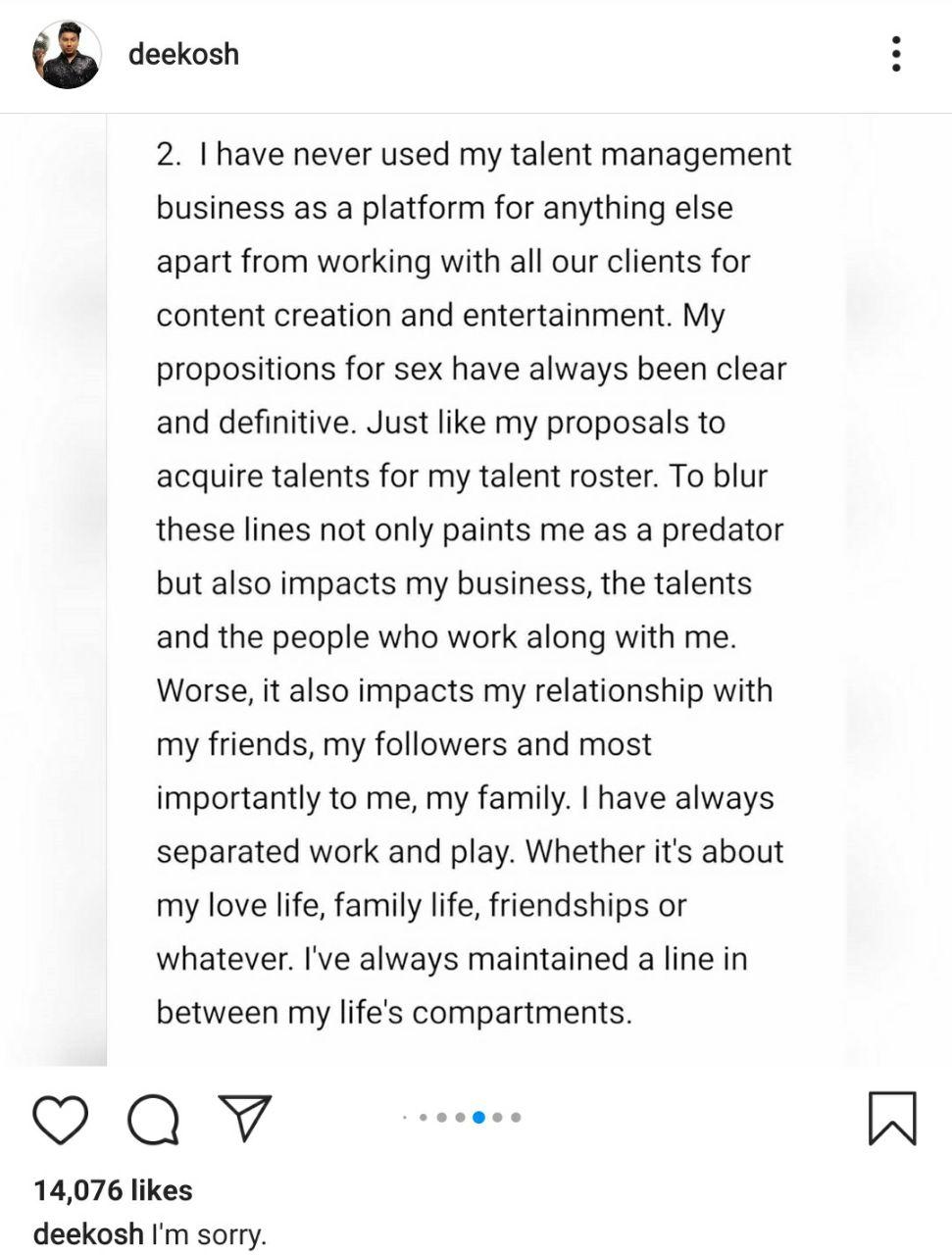 He insists that he keeps his professional and private lives separate, as blurring the lines would jeopardise his business.

Most of all, it would impact his family, friends and supporters, whom he values.

While he doesn’t deny having propositioned sex before, he claims that he has never used his business to do so.

Seeks forgiveness & promises to do better

Dee Kosh rounds off his posts by emphasising his willingness to take “personal responsibility” for his actions.

Understanding that netizens expect tangible actions to atone for his mistakes, he says,

I promise that from here on now I will do everything in my power to be better. I want to make conscious steps to change, to heal, to be the person that I want my family to be proud of.

He then proceeds to urge everyone to direct any dissatisfaction towards him alone, and leave his friends and family out of it.

He closes off with a final apology, seeking forgiveness from “all the people who have suffered from this.”

Lengthy apology aside, TODAY reported shortly before his post that the police are already investigating sexual harassment reports against Dee Kosh.

This was after they received 4 reports from different individuals.

Considering reports that his lawyers are no longer representing him, it’s unclear what the next step will be.

For now, we hope that the case can be settled smoothly and amicably, to prevent more people getting hurt.