Virus Vanguard Retired By Gov.sg Less Than A Day After Debut

The Virus Vanguard won’t be educating Singaporeans about Covid-19 measures anymore, it seems.

Less than a day after a new batch of comic superheroes debuted – oddly, on the Gov.sg platform – they were retired.

Aside from the fact that most of those superheroes weren’t wearing masks in these pandemic times, it seems nobody really asked for comics from the government. There was also backlash, particularly for the fact that one of the superheroes appear to be anti-Liverpool.

Eventually, after much “feedback”, the criticism proved to be too unrelenting.

A few hours after debut, Gov.sg announced that the Virus Vanguard had been taken out yesterday (20 Apr).

Not by an evil supervillain, but by the organisation that brought them to life. 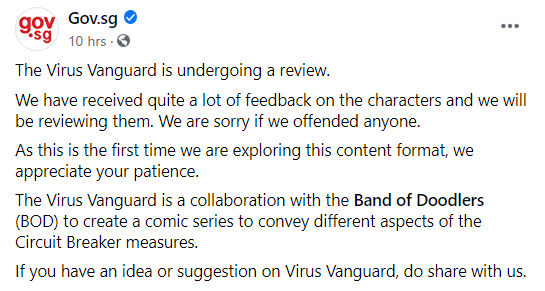 Much of the backlash appears to stem from one particular superhero that appears to be taking a swipe at a beloved English football team. But perhaps the logo on his costume was a little too overt. Fans took this as a slight against their club and song.

The artist who made the characters, Mas Shafreen, admitted on Facebook that he wasn’t the biggest Liverpool fan.

After all, no Manchester United fan would be seen singing “You’ll Never Walk Alone”. 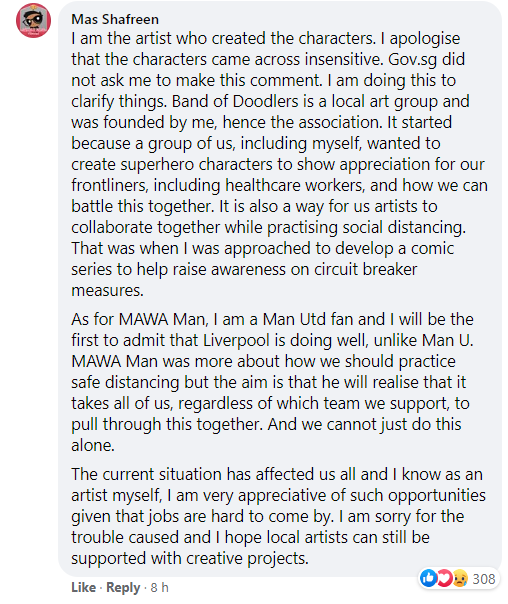 Look, we can see the intention behind MAWA Man, and it’s a light-hearted take on the need to practice social distancing.

But when the lack of social distancing is something that can be punished by law, maybe the government shouldn’t be making light on the matter.

Not to mention angering Liverpool fans – of which there are many – when they were about to win the league probably isn’t the smartest idea.

It seems that in these trying times, there are other heroes we should be celebrating, such as frontline workers and other essential staff who ensure the country remains fed and taken care of.

While some Liverpool fans feel slighted by the cheap dig at their club, others were quicker to forgive. 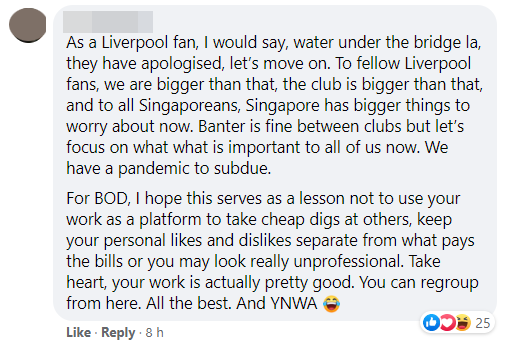 For better or worse, these are trying times everyone’s dealing with. While the comic certainly doesn’t come from a place of malice, there was way too much potential for people to take things wrongly.

Perhaps the Virus Vanguards will live on in some other format or platform. But for those who follow Gov.sg for Covid-19 updates, they’re unlikely to make a return anytime soon.