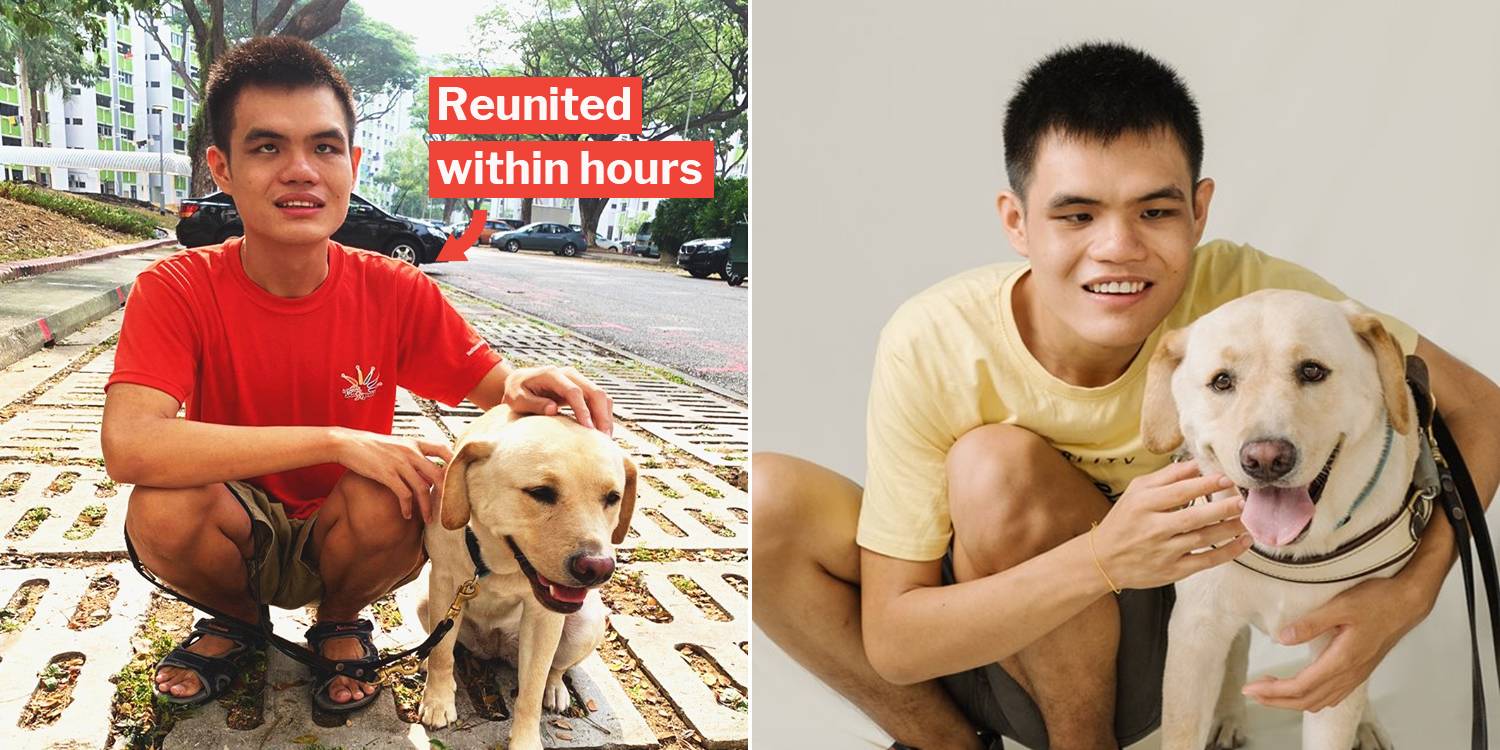 In July, Clare the guide dog first walked into our hearts after she was filmed leading her handler into an MRT cabin.

Around 2 months after, we learnt that she was separated from her visually impaired owner, Hong Sen, at around 5.45pm Monday (23 Sep). 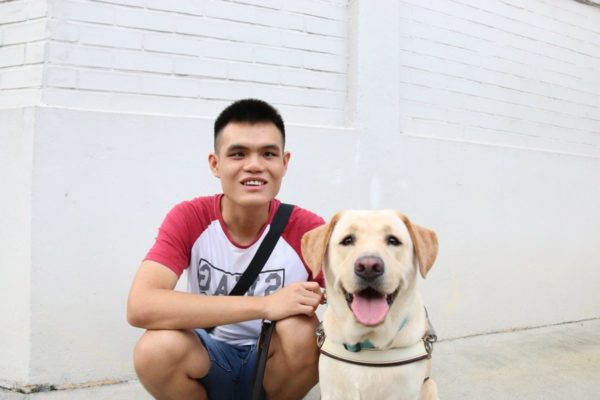 Motivated to help reunite Clare and Hong Sen, many caring Singaporeans took to Facebook, urging others to keep a lookout for the canine.

Hours later, Clare was reunited with Hong Sen. They were pictured together at an outdoor carpark in a Facebook post at 10am the next day (24 Sep). 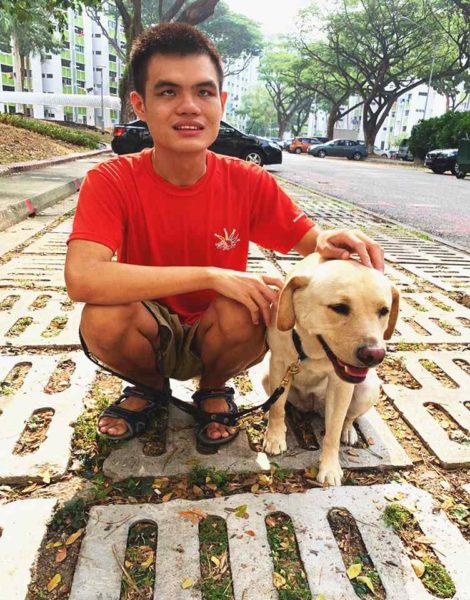 Hong Sen, a 23-year-old university student, was born with retinal dystrophy. Though he can still make out lights and shadows, he cannot see letters and colours due to his condition.

In 2017, Hong Sen was paired with a Labrador Retriever named Clare, who was then 2 years old.

Since then, the pair have been inseparable and they’ve been said to spend every waking moment together. 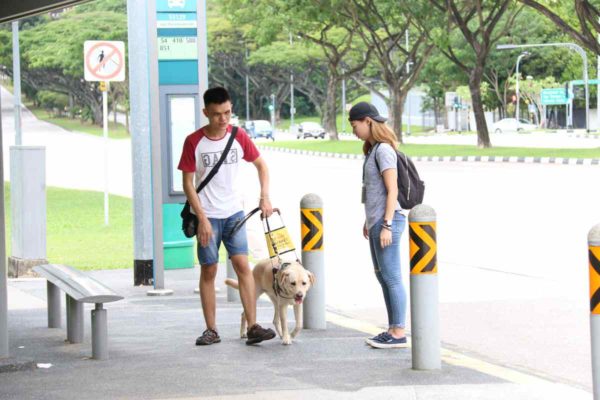 According to a post on Facebook, Clare was lost at around 5.45pm on Monday (23 Sep). She was last seen at a multi-purpose court along Chai Chee Street.

Singaporeans took to Facebook on the very same day, hoping to reunite Hong Sen with his beloved guide dog. 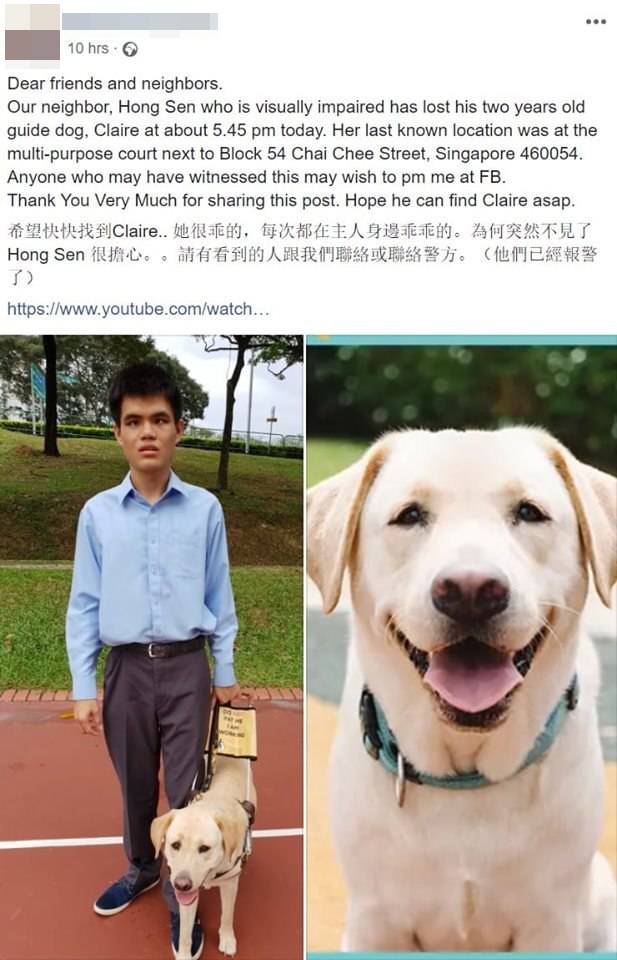 The post had more than 2,000 shares within 10 hours but has been taken down after Clare was found.
Source

The next day at around 10am, Guide Dogs Singapore LTD shared a post on Facebook, stating that Clare has been found by 2 people called Mathilda and Terrence. 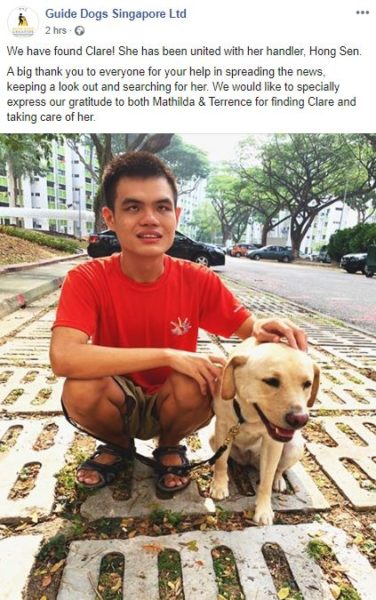 They also thanked everyone for their help in spreading the word and keeping a lookout for Clare.

Glad Hong Sen was reunited with Clare that quickly

We are glad that Clare the guide dog was reunited with her handler within such a short period of time.

One can only imagine the anxiety and shock that Hong Sen felt when he was separated from his canine companion.

Indeed, massive kudos go out to the netizens who helped to spread the word around, which surely assisted the search process.