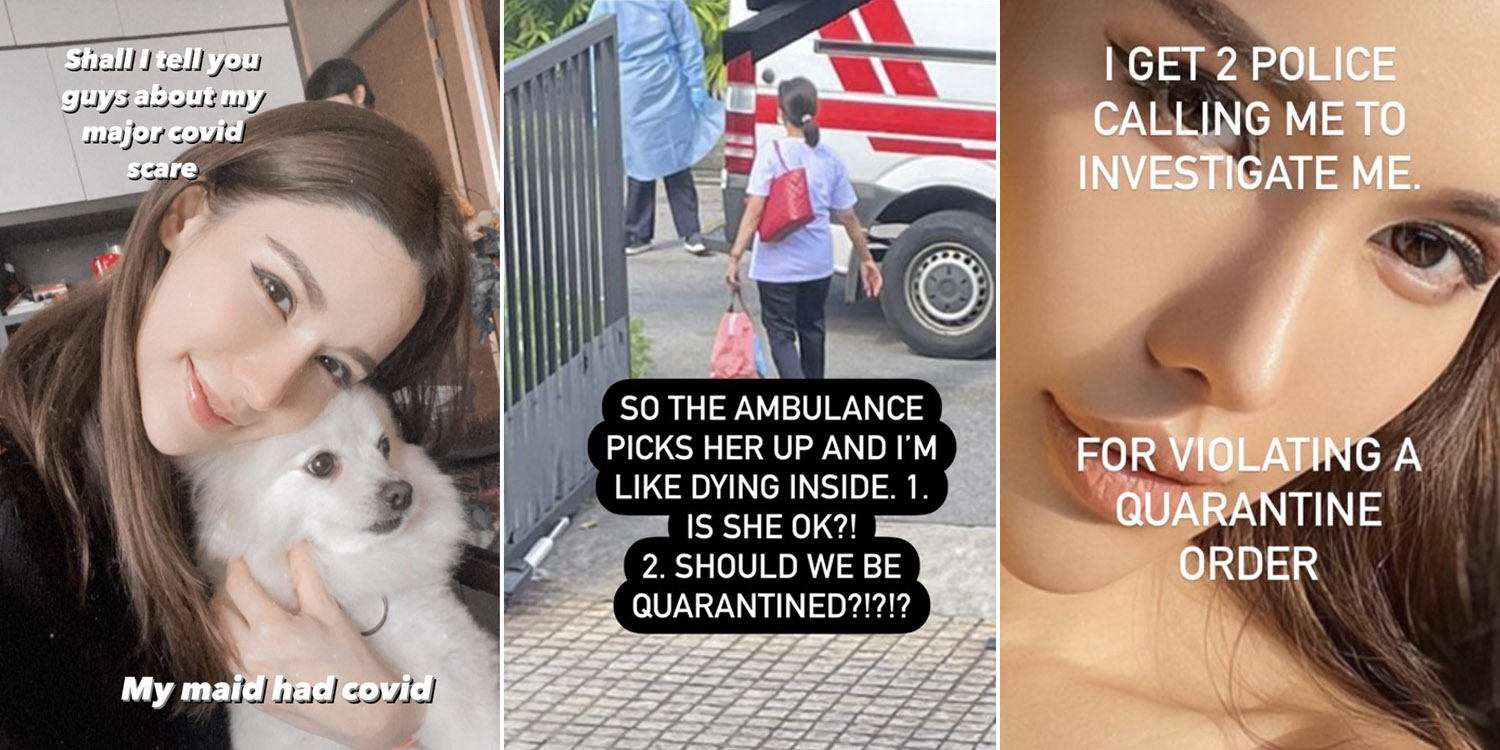 Over the past days, an account by former DJ Jade Rasif about how her helper had tested positive after completing her SHN has gone viral. 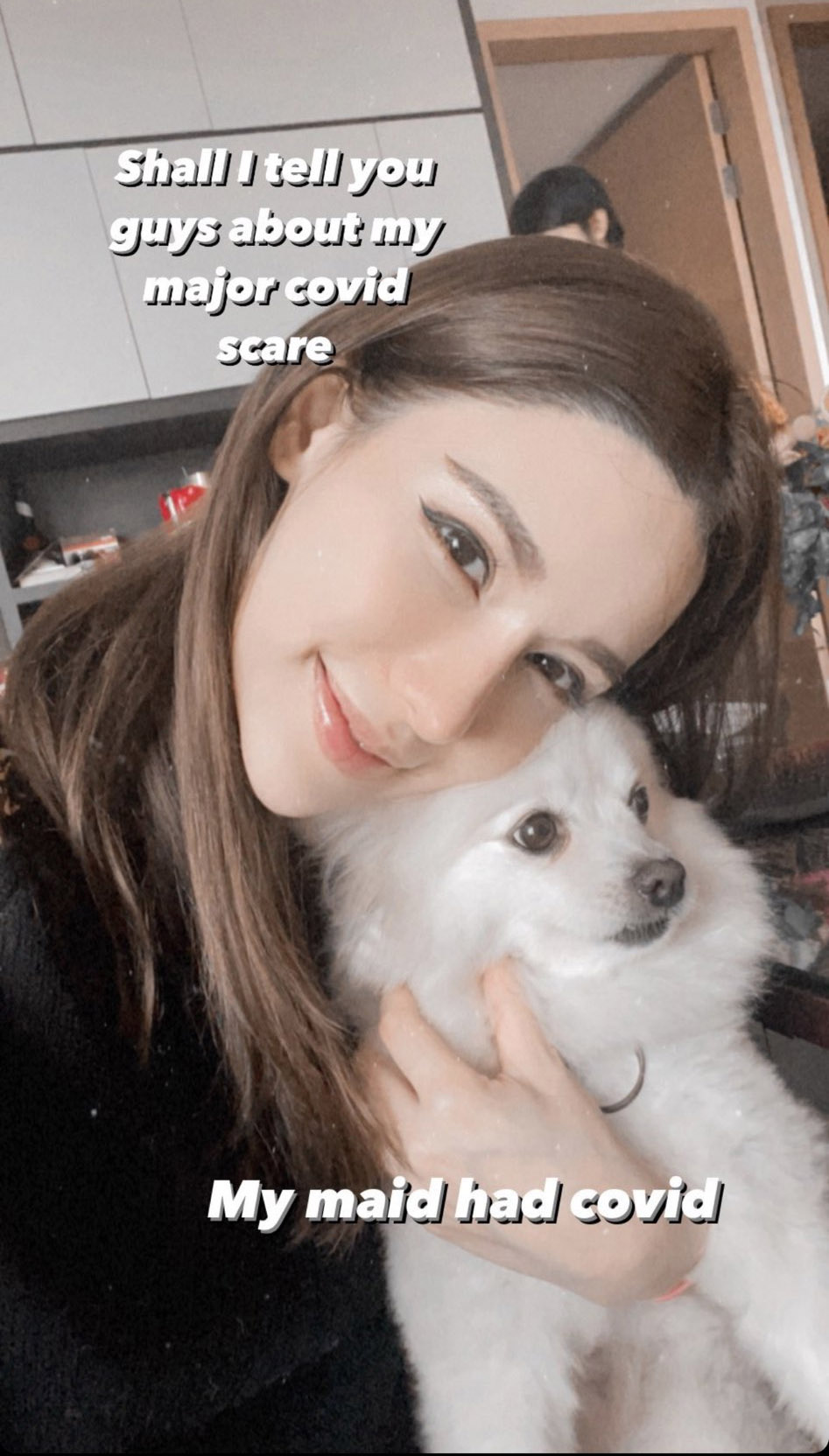 On Monday (17 May), the Ministry of Manpower (MOM) issued a statement regarding the alleged incident.

Describing Ms Rasif’s account as “inaccurate”, MOM clarified that the helper likely had a past infection. 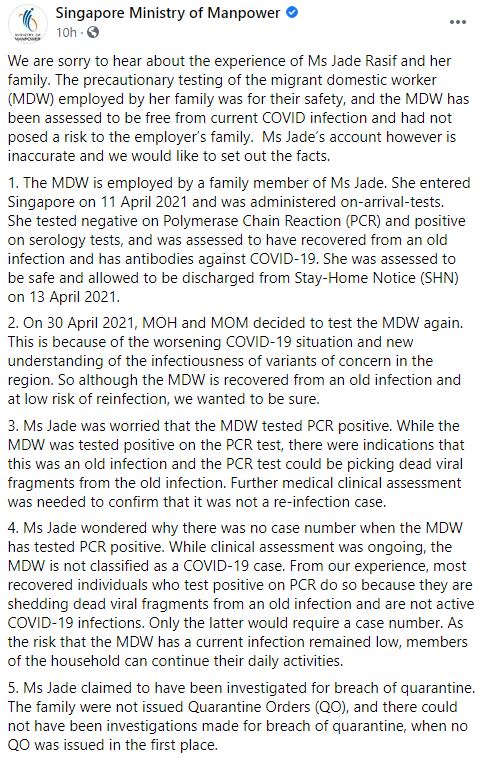 They also said that the helper was tested again – just a little over 2 weeks after completing SHN – as they needed to be sure if she was reinfected. You can read the full post here.

According to Ms Rasif’s Instagram stories, she and her family had paid $2,500 for her helper’s 2-week SHN. 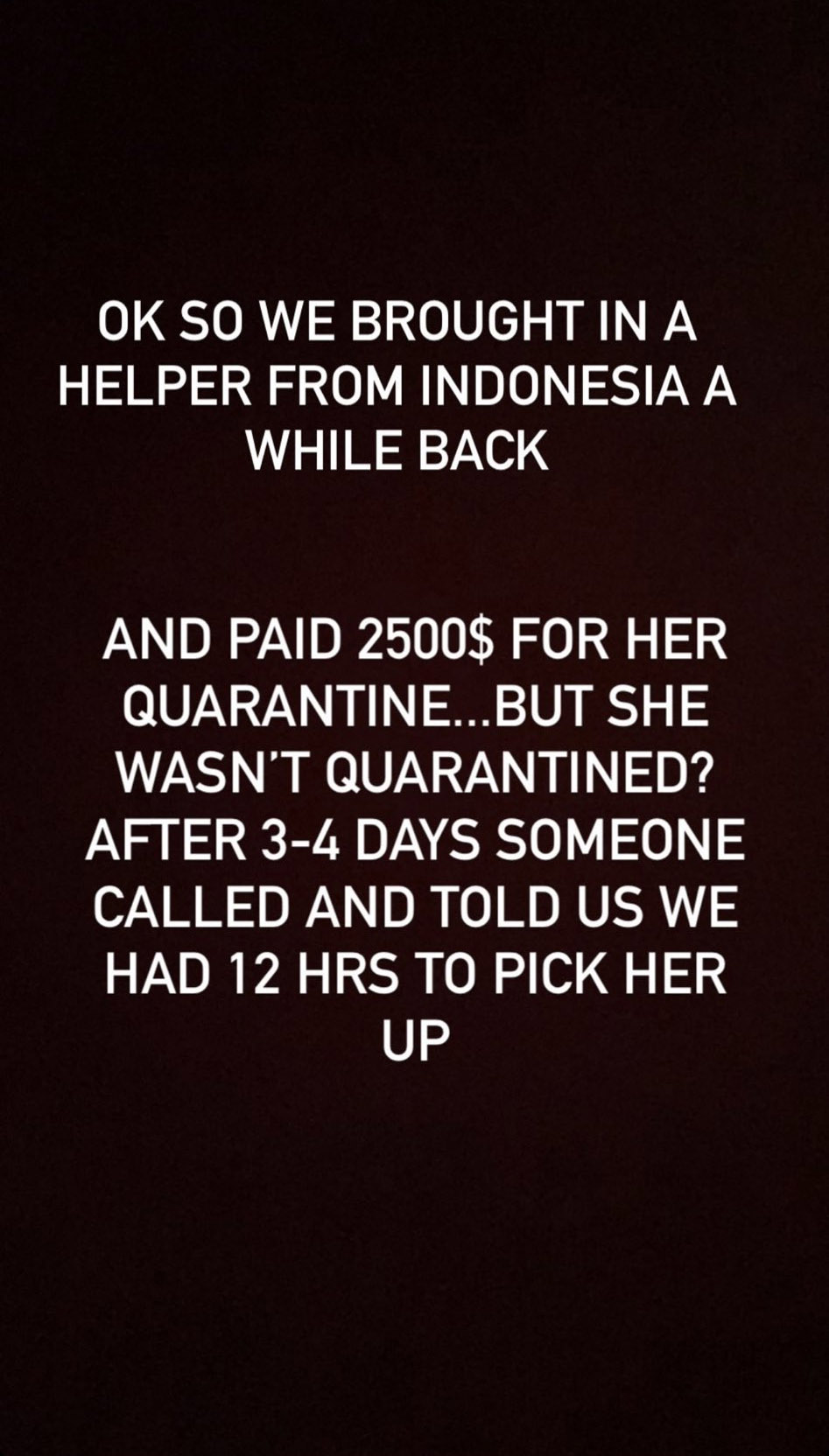 However, the helper was allegedly discharged after just 3 days. Ms Rasif added that someone had notified her over the phone that the helper had “recovered from COVID”.

Around 2 weeks later, the helper was asked to go for a “sudden Covid test”, which turned out positive. 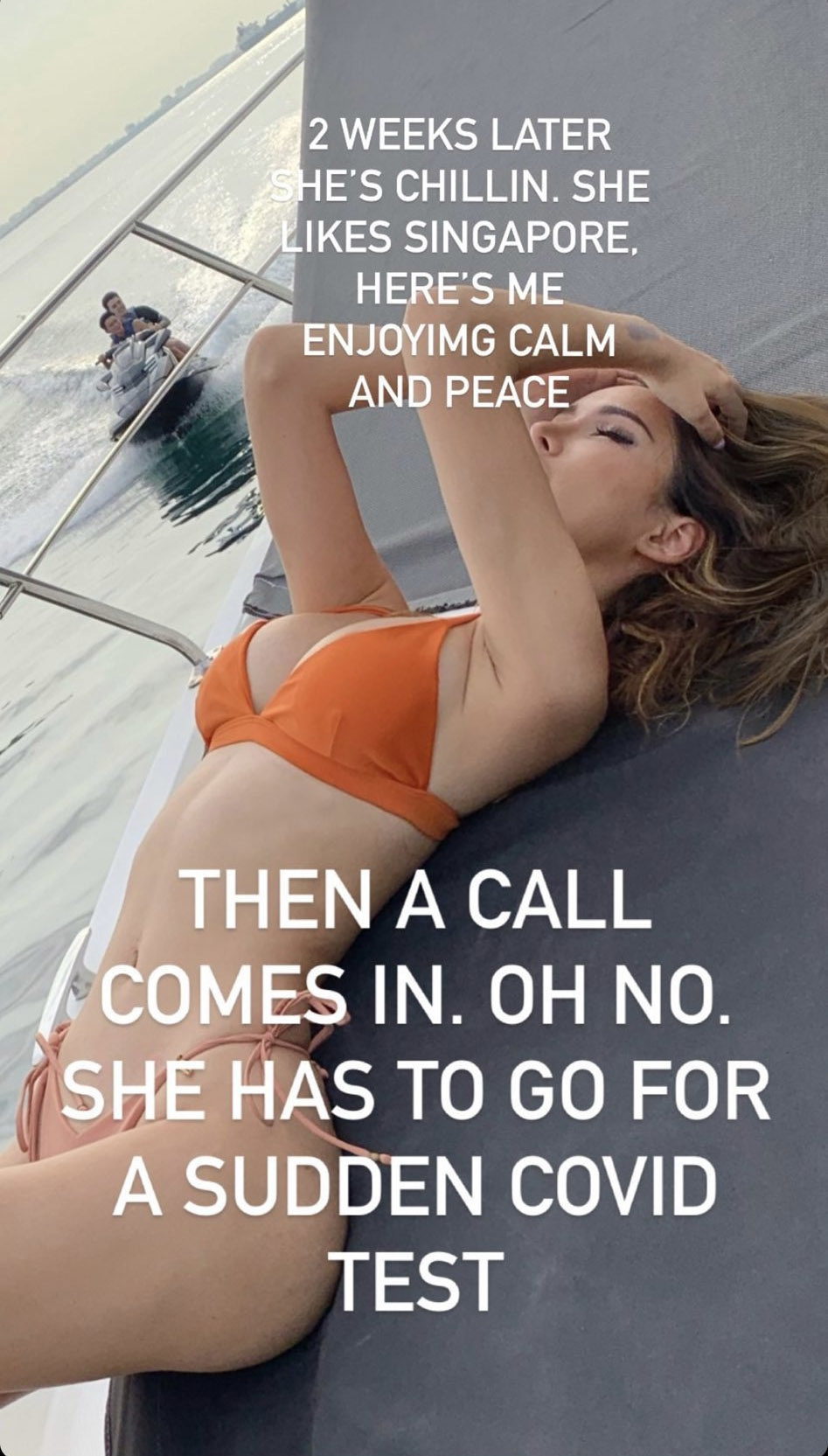 An ambulance then came by to pick her up and placed her under quarantine again.

As if that wasn’t confusing enough, Ms Rasif claims she and her family didn’t receive any quarantine orders (QOs), despite the helper’s positive test result. 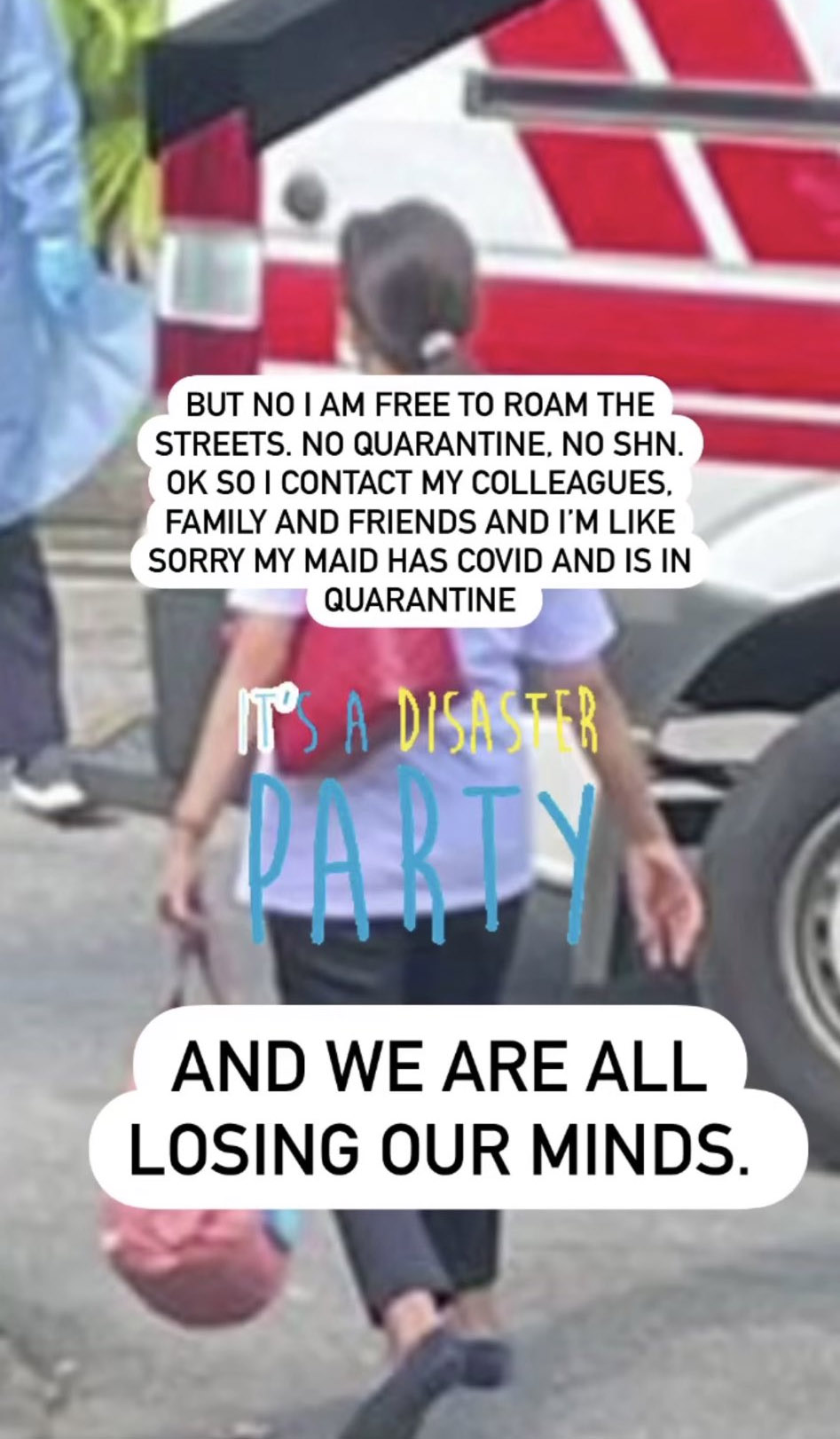 When she contacted the ambulance service – the only number she apparently had – she was unable to receive further clarification. 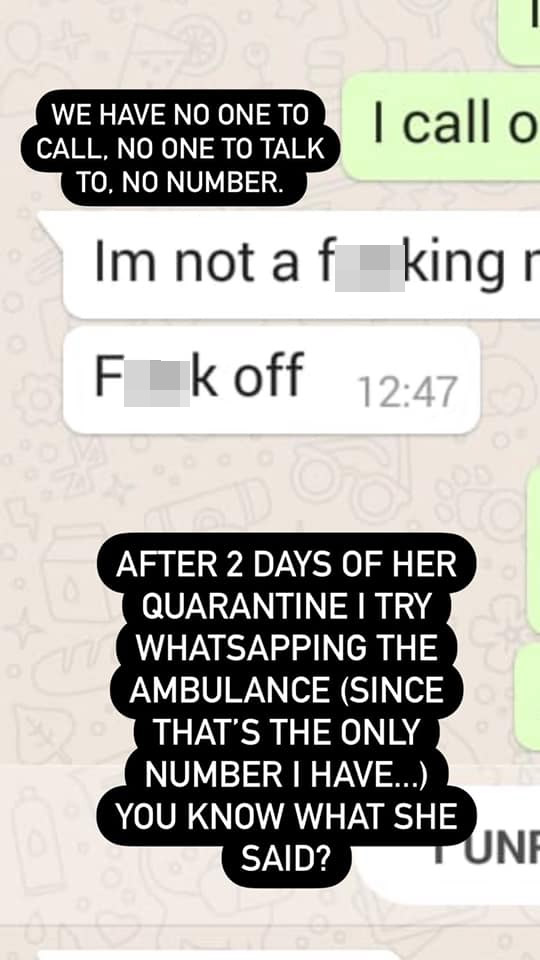 Sometime later, Ms Rasif allegedly received a call from the police informing her that she was under investigation for breaching a QO. 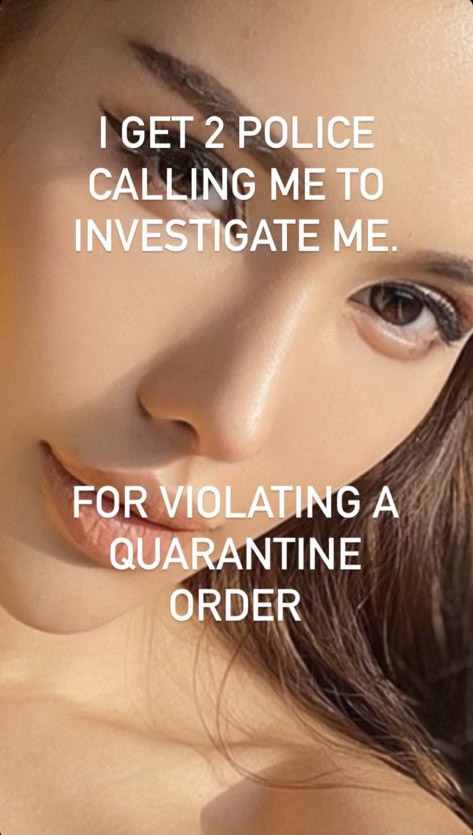 She shared that her family later forked out $200 for each of their Covid-19 tests. Thankfully, all their results came back negative. 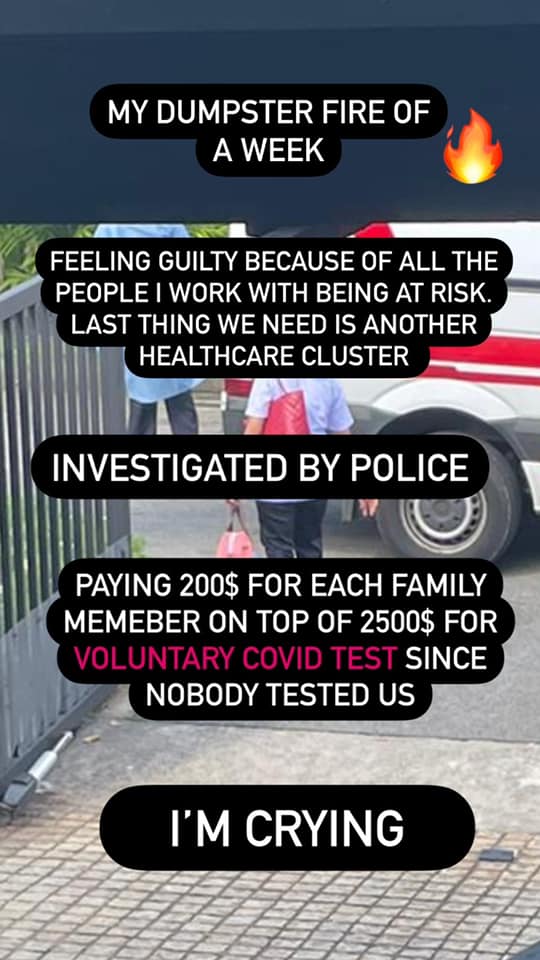 The former DJ then received another call telling her that her helper had tested positive upon arrival, but was “non-infectious”. This raised alarm bells and concerns for her family’s safety. Citing previous cases where people were released from SHN early only to test positive later, Ms Rasif called on the authorities to quarantine such individuals for the entire duration.

MOM says helper was retested as they needed to be sure

The ministry said that Ms Rasif’s helper was assessed to have recovered from a previous infection after,

Since she had recovered from a previous infection and developed antibodies against Covid-19, she was released from SHN 3 days later.

However, in light of the worsening regional situation, the helper was asked to undergo another round of tests just 2 weeks later as they “wanted to be sure”.

Responding to Ms Rasif’s questions about why she and her family didn’t receive QOs, MOM said the helper only had a low risk of infection. Hence, the family was able to go on with their daily activities.

And considering that she had received no QOs, MOM denies the existence of any investigations into the matter.

MOM also explained that the helper wasn’t assigned a case number as she wasn’t an active Covid-19 infection. In fact, the positive PCR test was likely due to dead viral fragments typically present in recovered individuals.

Since the helper wasn’t infectious and didn’t pose a risk to anyone else, the authorities eventually deemed her fit for discharge.

Despite thanking MOM for their honesty, Ms Rasif noted several inconsistencies in their response. You may read her points via the comment here. 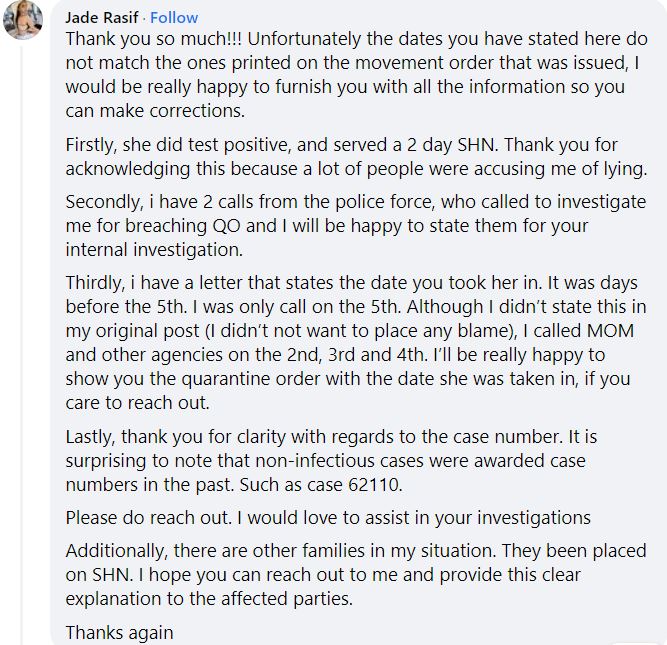 MOM has yet to reply, but we’ll update the article when they do.

Hope incident will be settled amicably

Putting ourselves in Ms Rasif and her families’ shoes, we can imagine how confusing the situation must have been.

In any case, we’re heartened by MOM’s swift response to the allegations, reassuring the former DJ that she and her loved ones have nothing to worry about.

Though it appears further clarifications might be needed, we hope the matter in question will be settled between Ms Rasif, her family, and the authorities in due time.

For now, we’re glad that they’re all safe and well.