The man approached the boy and said he could bring him home.

Man Arrested For Attempted Kidnapping In Johor On 11 May

Crimes that take place in remote places might be relatively harder to prevent, but those that occur in crowded places can sometimes be stopped if passers-by are alert to the situation.

Recently, a boy was nearly abducted in Johor. Thankfully, passers-by were vigilant and prevented the boy from being taken away. 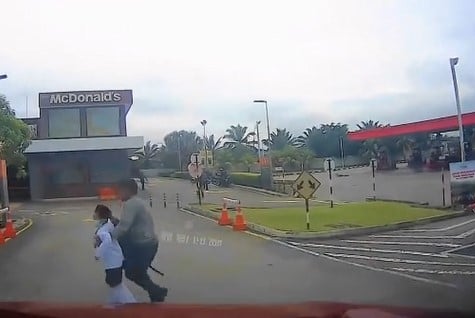 The police swiftly arrested the culprit later that day.

Footage shared by Utusan TV showed a man in a grey shirt walking in front of the dashcam, holding tightly onto a young boy with one hand while carrying a bag with the other.

A man, presumably the car passenger on the dashcam vehicle, can be heard shouting loudly at the man.

Soon, the man gathered pace and quickly walked past the car with the boy in tow.

As the culprit hastily dragged the boy in a supposed attempt to flee, a group of passers-by emerged from the nearby McDonald’s outlet. They quickly ran toward the man while shouting at him.

One of them seemingly caught up to the culprit and held his hand out to enquire what the man was up to.

The other passers-by quickly walked over and joined the rescue.

According to The Star, a “mentally impaired” man was arrested for attempting to abduct a 7-year-old boy in Taman Kota Masai, Johor.

Johor’s police chief said that they were notified of the attempted abduction after a man called for assistance at about 11.30am on 11 May.

Passers-by at the scene had reportedly apprehended the suspect, who’s in his 20s. Police officers patrolling the area later arrested the suspect.

Preliminary investigations found that the culprit had approached the victim, who was walking home after religious school, telling the boy that he could fetch him home using his motorbike.

The police chief added that they have seized the culprit’s motorbike and upon further checks, found that he “has a disabled person card stating that he is a patient but is also wanted by the police for a drug offence.”

Hoping that such horrific incidents will not happen again, he urged parents to keep a lookout for their children, especially their whereabouts.

Glad the boy is safe and sound

Alone and carried away against his will, the boy must’ve been terribly frightened, as one can imagine.

Kudos to the passers-by for their vigilance and bravery, going the extra mile to ensure the boy taken away.

We hope that the boy is recovering well from the traumatic incident and that he’s in safe hands now.