Having centipedes in your food sounds terrible. But at least they’re dead.

STOMP posted a submission on Monday (22 Apr) that showed live maggots crawling around quail eggs that was bought from Sheng Siong’s outlet in Yishun.

Eggs had not passed expiry date

Imagine getting ready for dinner and realising that your food literally has eggs inside.

That’s what the STOMPER found when she opened a carton of quail eggs, with an expiry date of 19 Apr, on 16 Apr.

The carton of eggs was allegedly bought on 11 Apr at Sheng Siong’s outlet in Yishun so the eggs were only kept for 5 days.

Following a query by STOMP, Sheng Siong says that it was an isolated incident.

After the reports, they went through all the eggs in their shelves to ensure that they were not damaged as well. They also promised to talk to their suppliers to try and prevent future occurrences.

Sheng Siong has apologised to the customer and is offering him/her a refund for the purchase.

Eggs are extremely prone to contamination as they crack easily. So now you know why your mother always inspects every single item before buying it.

Third occurrence of maggots in food in 2019

Since the start of the year, there have been 3 such cases, including this recent one, of maggots being found in supermarket food products.

Two other cases happened in January and February. Maggots were found in food bought from FairPrice.

The February incident is similar to the recent one. A father found maggots in quail eggs before its expiry date. Except that in this incident, he allegedly checked the eggs before purchasing them.

The January case is arguably more serious as the crabs were bought on the day itself and were advertised as live crabs. The man realised that there were things moving in the bag, only to find out that it was live maggots. 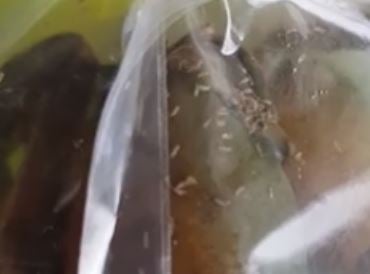 FairPrice responded that they are working with their supplier to prevent future occurrences.

Check your food before purchase

To prevent such incidents from happening, you should always check your foods before purchase.

You can also exercise more caution when handling eggs to prevent any cracks. When eggs are cracked, flies are able to lay eggs in them. And a few days later, you’ll get maggots. So be careful when bringing them home!