Making a comeback under new management.

Naiise Makes A Comeback As Online Store On 16 Sep

As brick-and-mortar stores struggle during the pandemic, many have unfortunately ceased operations over the past year.

One of them was Naiise, a store that champions local brands and talents. They had ceased operations amidst claims of unpaid fees. After 5 months out of the spotlight, they are poised to make their comeback as an online store on 16 Sep.

Announcing their return via a Facebook post, Naiise interestingly noted that they will pay sellers instantly upon every successful order.

Naiise invites merchants to list on platform with incentives

According to the aforementioned post, Naiise will be making a comeback as an online marketplace at 9pm tonight (16 Sep). 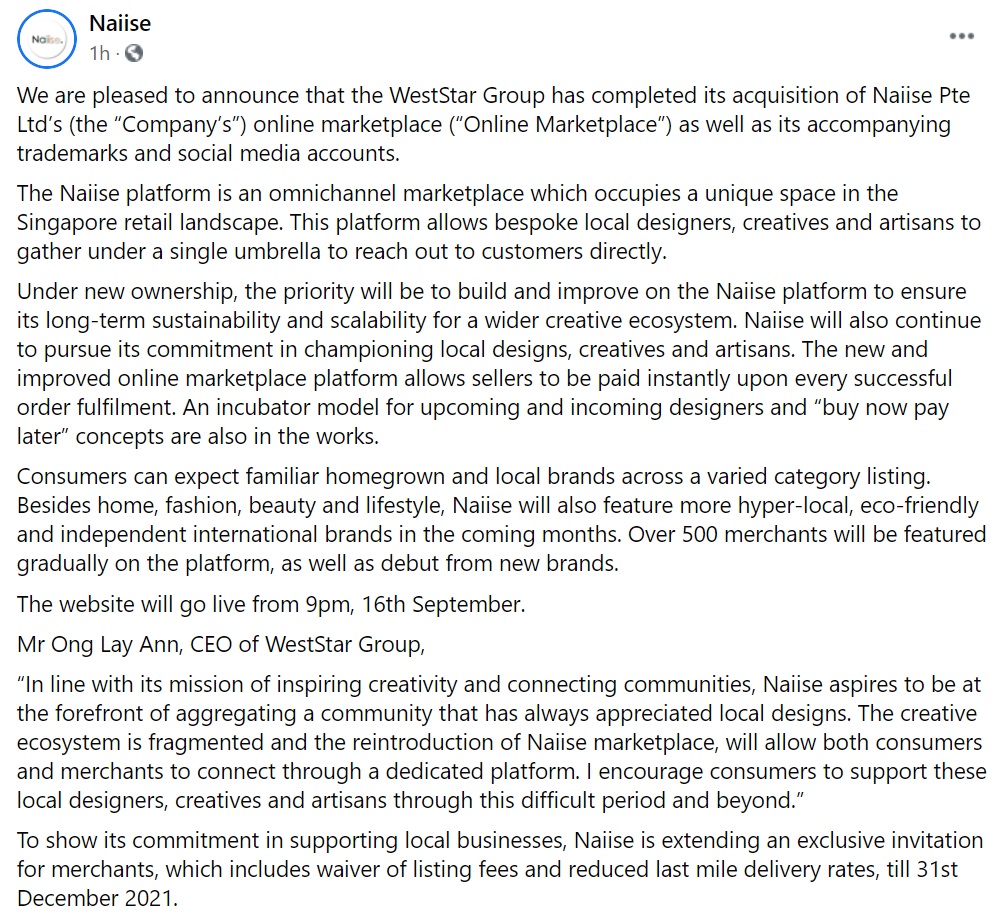 The website is set to feature local brands across a varied category listing.

The post also mentions that the brand has been taken over by WestStar Group and under the new leadership, will look to connect consumers and merchants once again under a single platform.

To show their commitment towards local businesses, Naiise is extending an invitation for merchants to list products on their platform. The invitation includes a waiver of listing fees and reduced last-mile delivery rates till 31 Dec.

Ceased operations back in Apr

Back in April, Naiise ceased operations indefinitely after what was described as a difficult 2 years.

Naiise founder Dennis Tay took to Facebook to explain the sudden announcement and attributed the closure to a failure to pay his brand partners.

However, this was not the end of it. An exposé blog came to light after the announcement, exposing the many alleged issues that plagued the company.

Some of the problems apparently included unpaid wages and misappropriation of funds.

Hope for a successful Naiise comeback

Hopefully, Naiise’s second coming will be better than its first.

After all, they are one of the very few platforms that champion the local artisan scene which could use more public support.

Let’s hope their comeback is a success, with smoother operations and better relations between vendors and the company.