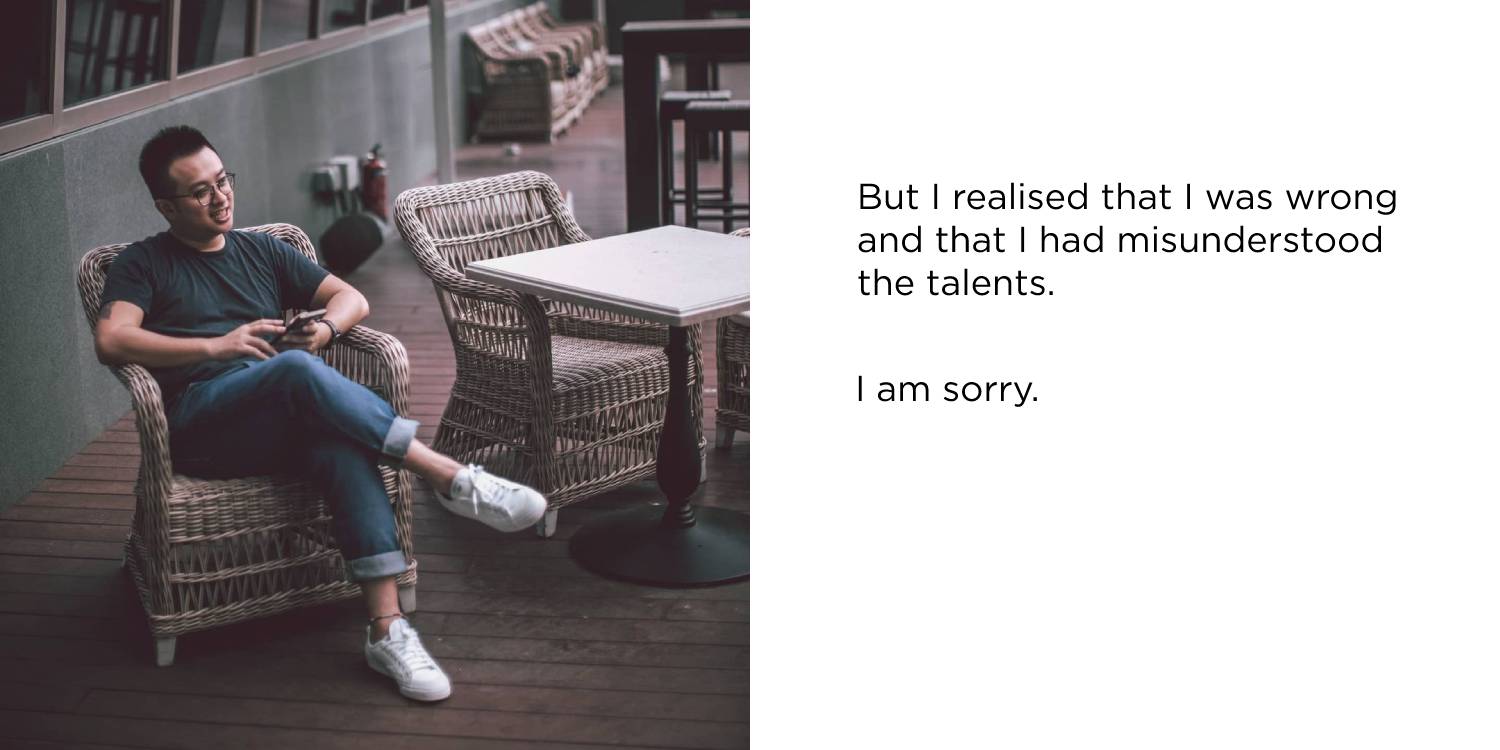 The latest development was a series of texts leaked by an unknown party to Instagram page @wakeupsingapore depicting the other co-founder Ryan Tan making inappropriate comments about some employees.

Ryan has since made an apology and clarified that the texts were made around 4-6 years ago when he mistakenly believed that some talents were leaving NOC to start a competing channel. 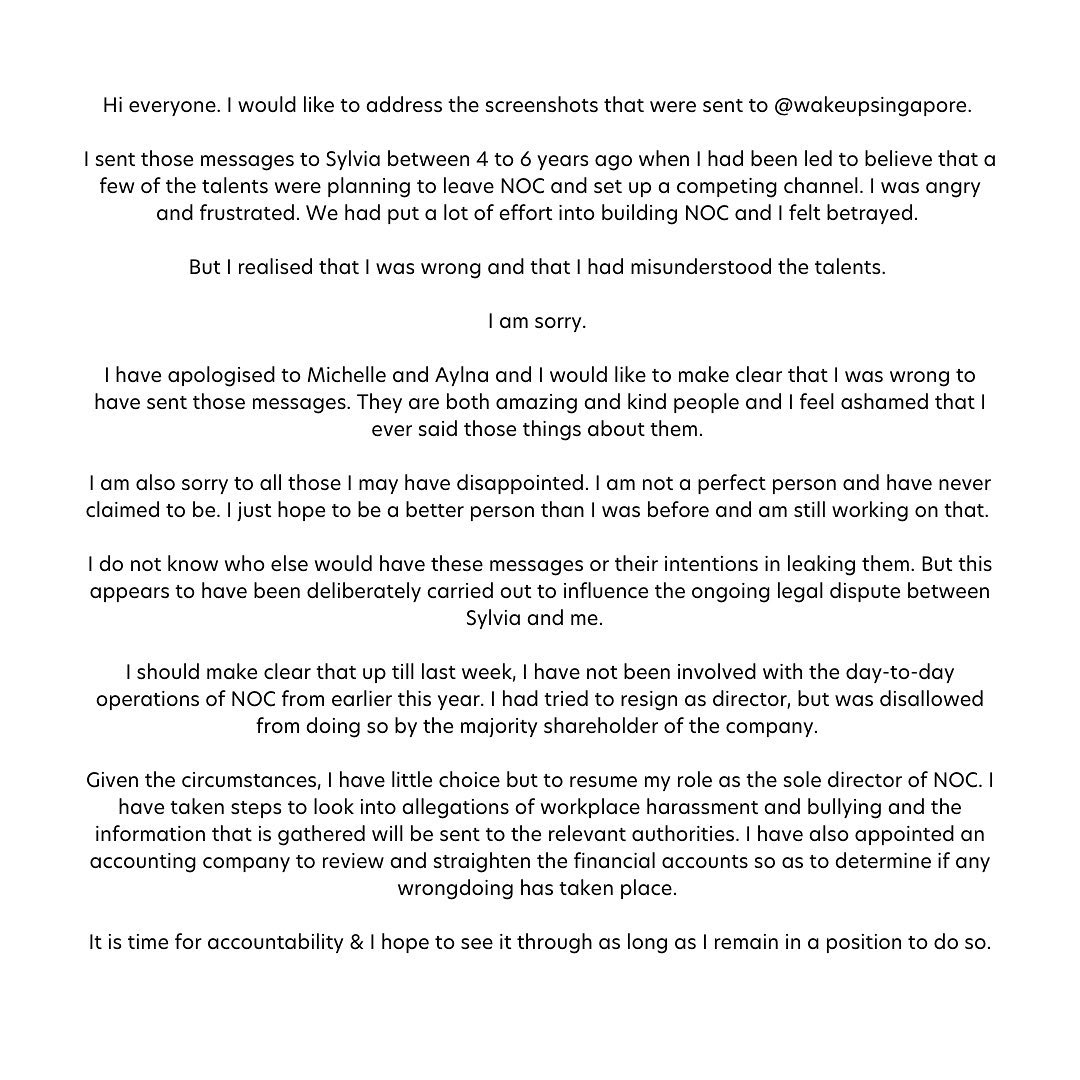 He also said that he’d apologised to the talents, and noted that he’s working towards accountability at the company in his capacity as NOC director.

The text screenshots on @wakeupsingapore contained words directed at 2 ex-NOC employees, Michelle and Aylna, allegedly expressing their wish to “kill aylna (sic) off” and “torture (Michelle) until she “f*cking just kill herself”. 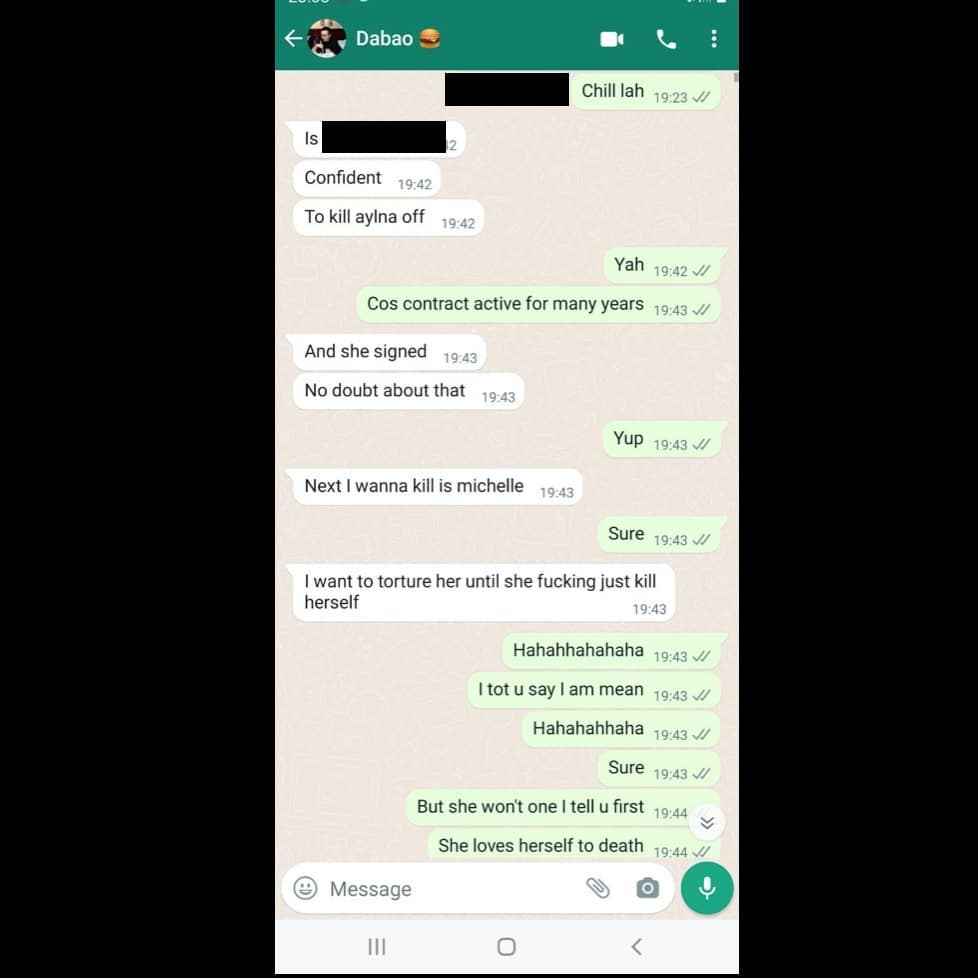 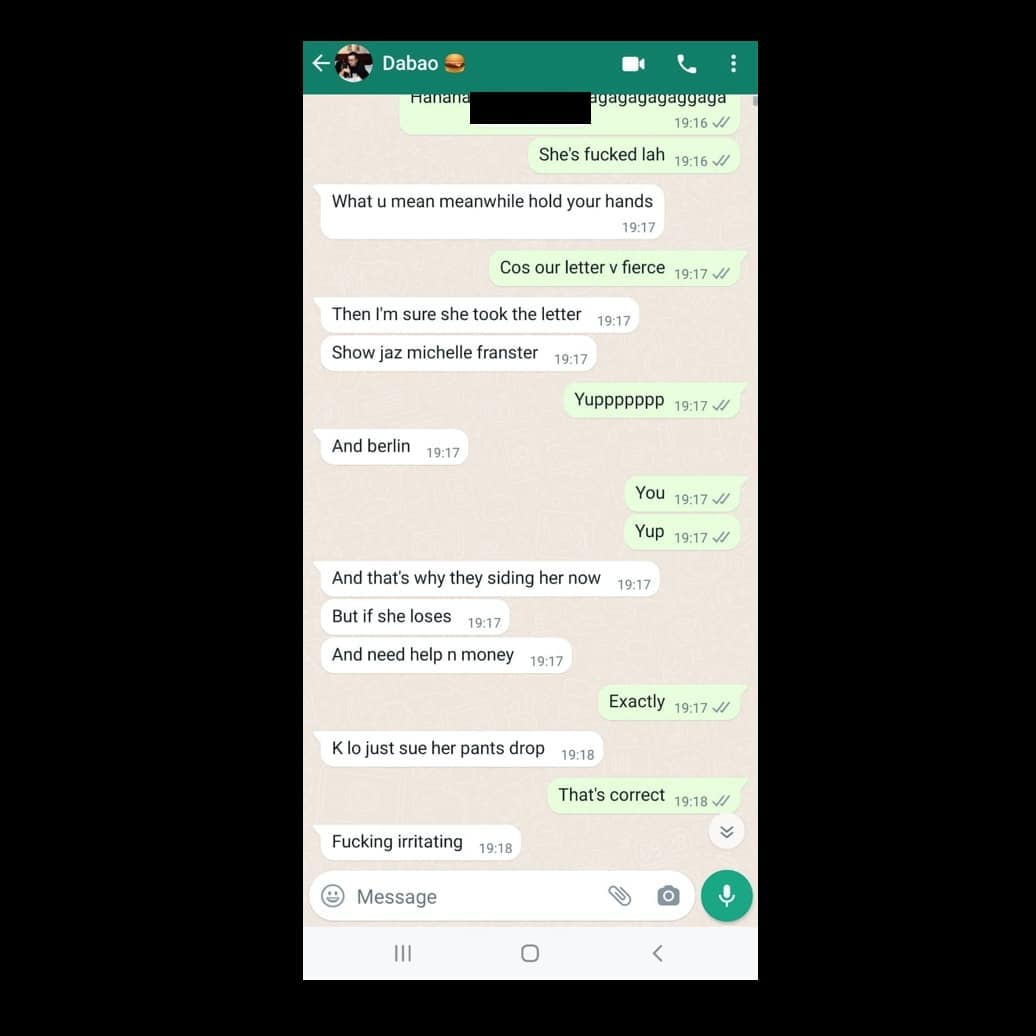 Accompanying the text screenshots is a note from the leaker, who claims to be someone close to both Ryan and Sylvia.

However, they declined to reveal their name due to threats of a lawsuit and harassment.

They claimed that Ryan is still a director at NOC, and hoped @wakeupsingapore would post both sides.

They also think it is fair that “both parties are blamed”, noting that Ryan is “very active” in NOC management over the years.

Here is the caption in full:

Hi, Wake Up SG. I am someone close to both Sylvia and Ryan.

I need to keep my identity secret as we are all afraid of lawsuits and harassment.

The threats are real.

I am sending you this because I hope you will give fair coverage of the NOC saga.

I can show you that these screenshots are authentic. What I hope is that for you to post both sides, and let people reach their own conclusions.

Actually, Ryan has been very active in NOC management over the years and he is still director today.

Anything about the culture and environment, I think it is fair that both parties are blamed. I am not taking sides but I only want to support the talents.

I don’t think it is fair for Ryan to pretend he has nothing to do with the state of affairs at NOC.

I don’t want him to mislead the public or young talents into thinking that he is very good and faultless when a lot of the issues in NOC are also his doing.

Within an hour after the Instagram page posted the screenshots, Ryan uploaded a statement, which was also published on @wakeupsingapore.

He explained the context of the messages, saying he sent them to Sylvia “between 4 to 6 years ago”. He said he’d been led to believe that some talents were planning to start a competing channel.

However, it was a mistake. He said he had apologised to Michelle and Aylna, admitting that he was “wrong to have sent have those messages”.

Additionally, he apologised to everyone who he may have disappointed, saying he’s not a perfect person but is hoping to be a better person than before.

Ryan also clarified that he is in an ongoing legal dispute with Sylvia and said he doesn’t know who else would have the messages or their intentions in leaking them.

Sylvia has made a magistrate’s complaint regarding harassment and email hacking, among other things, and said she’ll rebut the allegations against her in due course.

Looking into allegations of workplace harassment at NOC

Additionally, Ryan confirmed that he is still director at NOC even though he’d tried to resign. And until last week, he hadn’t been involved in day-to-day operations since earlier this year.

However, he “was disallowed from doing so by the majority shareholder of the company”. As such, he’ll carry on as the sole director of NOC.

Ryan said he is looking into allegations of workplace harassment and bullying at NOC. He has also appointed an accounting company to look into NOC’s finances.

He noted that “(it) is time for accountability & I hope to see it through as long as I remain in a position to do so”.

Here are some responses to the apology, which largely make note of his timely answer and sincerity. 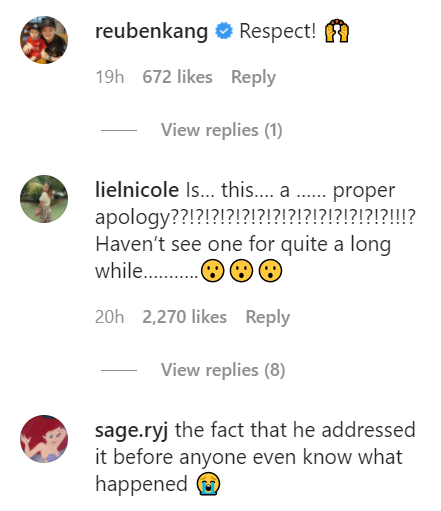 Others also called it a “real apology”. 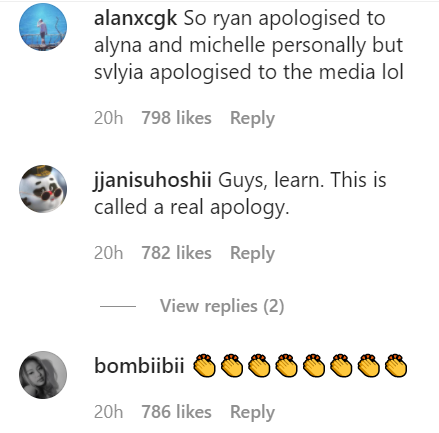 A Redditor also gave praise to Ryan for not deflecting with his apology and making amends with those involved. 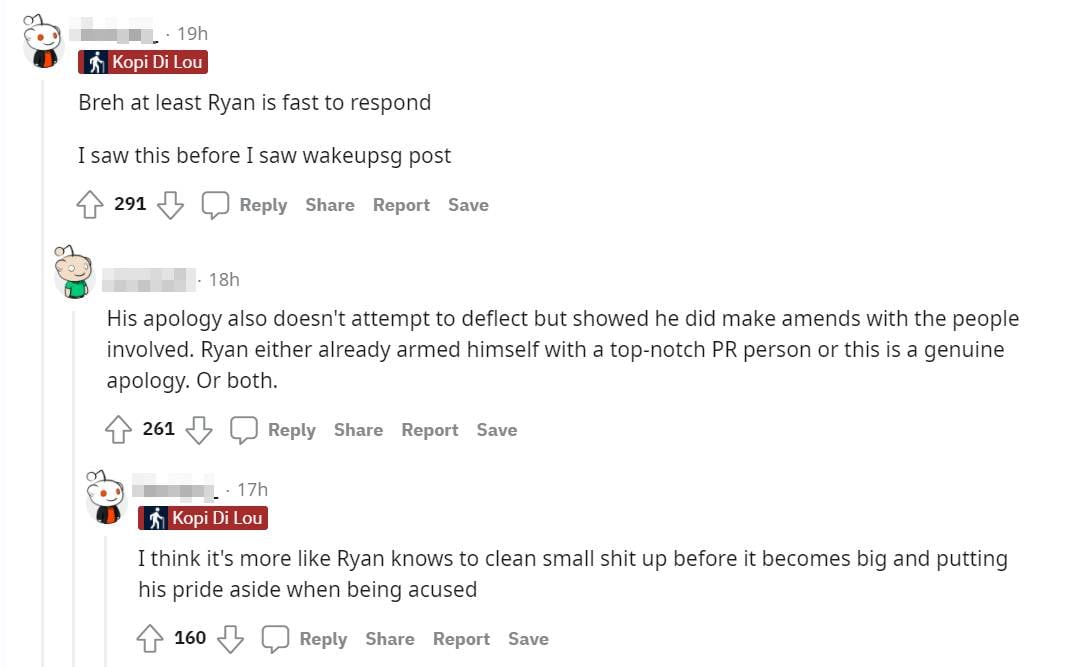 It is definitely rare to see a public figure apologise and admit to their past mistakes.

People may be more willing to forgive if they can sense sincerity in the apology.

At the end of the day, the priority is to have a workplace that’s free from harassment and toxicity.

Hence, employers need to be accountable so that employees can work in a safe environment and be treated with respect.

We hope NOC can see better days from now on.