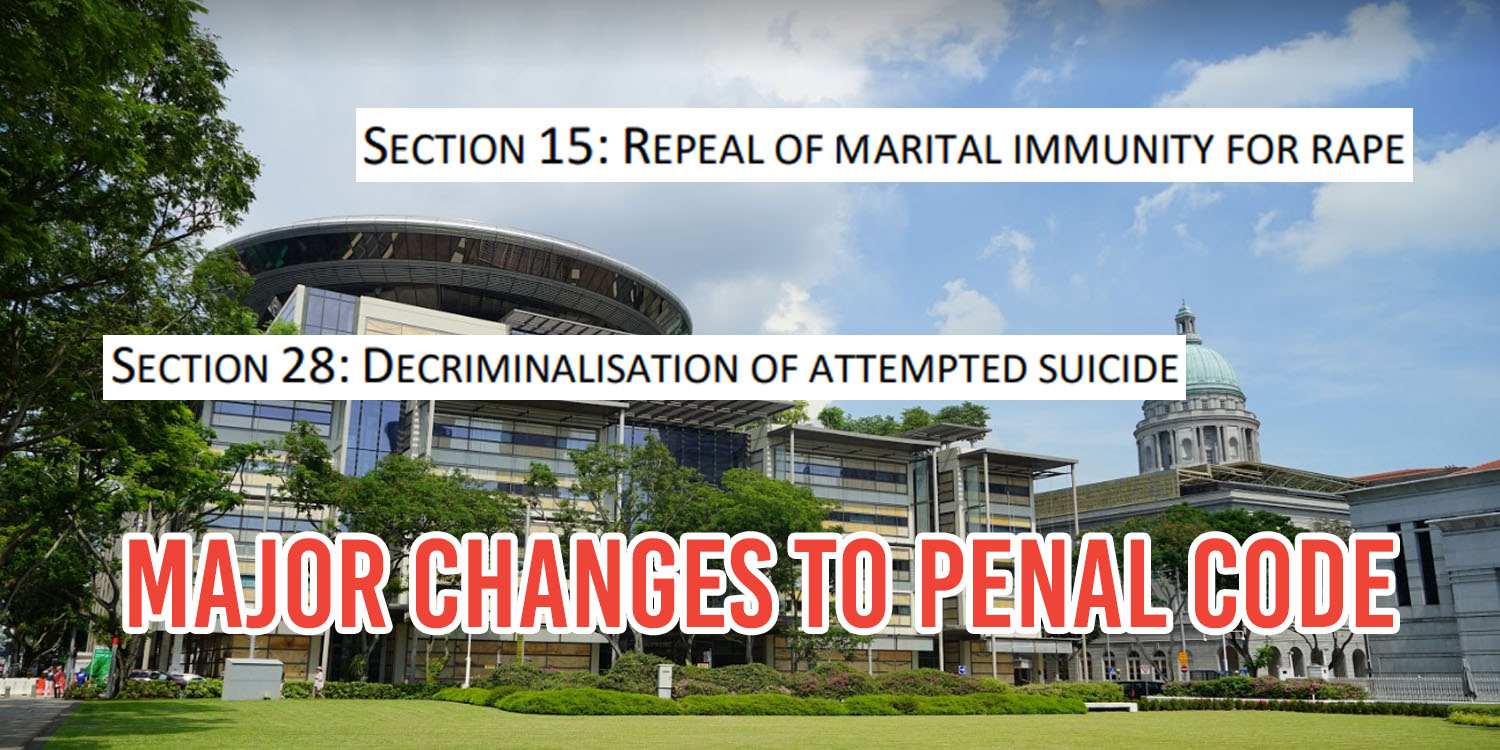 A major revamp is in the works for our penal code, with one glaring exception — repealing Section 377A, a controversial law criminalising homosexual sex between men.

However, the other 169 proposed changes in a 500-page report are open to public feedback, before they’ll probably get passed in Parliament this November.

Here’s a quick rundown on the major proposed amendments that will probably affect all of us in the long-run.

Engaging a child in any of the following ways to procure illicit child material will be a crime:

Causing a minor to look at sexual images will now be a crime, and the minimum age of criminal responsibility for children will be raised from 7 to 10 years old.

Reason: Fictional material may be used for “grooming children” or reinforcing that the relationship between child and abuser is the norm.

Case: Joshua Robinson, an American mixed-martial artist, faced a 4-year jail penalty for his various offences — sex with minors, screening an obscene film to a 6-year-old, possessing 6,000 obscene films with some involving children.

Enhanced penalties are to be expected for offences against “vulnerable persons”, defined as domestic helpers, children below 14 and those with mental or physical disability.

The committee proposes up to 2 times the max penalties awarded for these offences.

Now, it’ll be an offence for anyone to “cause or allow the death or serious injury” of children or vulnerable people.

Jail terms of up to 20 years, fines, and caning will be implemented on offenders.

“Sustained abuse” of a person resulting in death is also to be listed as a new offence.

Reason: Only if a person’s final act towards the victim will be considered in court, when abuse leads to death. The prosecution has to prove that the person had an intention to kill and the the act itself would have resulted in his or her death.

Case: Annie Ee‘s horrific abuse case that shocked the nation involved 8 months of physical torture and abuse. But while her aggressors got away with jail terms, many Singaporeans expressed that they wished to see harsher punishments.

Now this repeal is one that’s been a while in the making.

Currently, it’s not a considered rape for a woman who is married in Singapore, if her husband is the aggressor.

A “full, unqualified repeal” of “marital immunity for rape” is thus a pretty landmark change.

Mr Shanmugam clarified that the move does not “contradict” Muslim beliefs and added,

A woman’s body is her own. And even if she’s your wife, she’s entitled to say no – and no means no.

Reason: All women should be protected from sexual abuse, regardless of their marital status or the offender’s identity.

Case: A 21-year-old navy regular bound, gagged and had sexual intercourse with his wife against her will in 1999. He was given 18 months’ in jail and a $4,000 fine for “voluntarily causing hurt, wrongful confinement and criminal intimidation”. But the act could not be considered rape unless the victim was under 13.

Due to widespread use of mobile devices and social media, new amendments hope to catch would-be cyber offenders.

Making, distributing, possessing or accessing “voyeuristic recordings regardless of gender” will now be made an offence.

As well as threatening to disseminate an “intimate image” online.

Reason: It’s currently not an offence in itself to threaten to release intimate images online. Criminals are charged with other offences like blackmail or extortion instead.

Case: A man who created a Google group named ‘SG Horizon Club‘ threatened to kick his members if they didn’t upload 1 obscene video a week. For possession of more than 801 illicit films – including hidden camera vids – he was given the maximum penalty of 2 years in jail and an $80,000 fine.

The changes will help Singapore prosecute criminals and syndicates that operate out of Singapore as well, for “selected white-collar and property offences”.

Reason: To ensure that “emerging crime tactics” targeting financial systems, which bank on new media and technology are dealt with swiftly.

Case: 11 men misappropriated fuel from Shell’s plant in Pulau Bukom in a scam involving millions of dollars. They each face criminal breach of trust charges and could get up to 15 years in jail and a fine.

Attempting suicide in Singapore is currently an offence, punishable by 1 year in jail, a fine, or both.

With the repealing of section 309 of the Penal Code, individuals may be allowed more healthcare and social assistance, instead of facing jail terms.

If the amendments pass, Singapore will leave the ranks of Malaysia and Bangladesh behind, 2 other states who have criminalised suicide.

Police officers, will however, be given these expanded powers to “immediately intervene to prevent harm or loss of life”;

Helping someone, or allowing someone to take their own lives will still be an offence.

Reason: Criminalisation is no longer the best way to prevent suicides. There is a growing sense that “treatment, not prosecution” is the “appropriate response”.

Cases: Offenders currently get up to a year’s jail, fine or both for attempting suicide. But MHA says prosecutions are “rare”, with 0.6% reported cases resulting in prosecution from 2013 to 2015.

A similar law to Section 377A of the penal code, which makes acts of “gross indecency” between men criminal, was repealed in India on 6 Sep.

However, amendments to 377A are not part of the agenda this time.

This is despite calls from diplomat Tommy Koh for the gay community to “try again”, multiple petitions to repeal the code, and 10 years’ worth of Pink Dot celebrations.

Reason: Apparently Singapore still doesn’t “seem ready” for the law to be repealed.

With discussion and input from the general public, the committee hopes to create a revised Penal Code that is “principled, proportionate and practical”.

Mr Shanmugam added that he hoped the revised code would “continue to serve Singapore well in the years to come“, which may mean it’s going to be a while before we see such major changes again.

You can submit your feedback about any of the changes by 30 Sep: