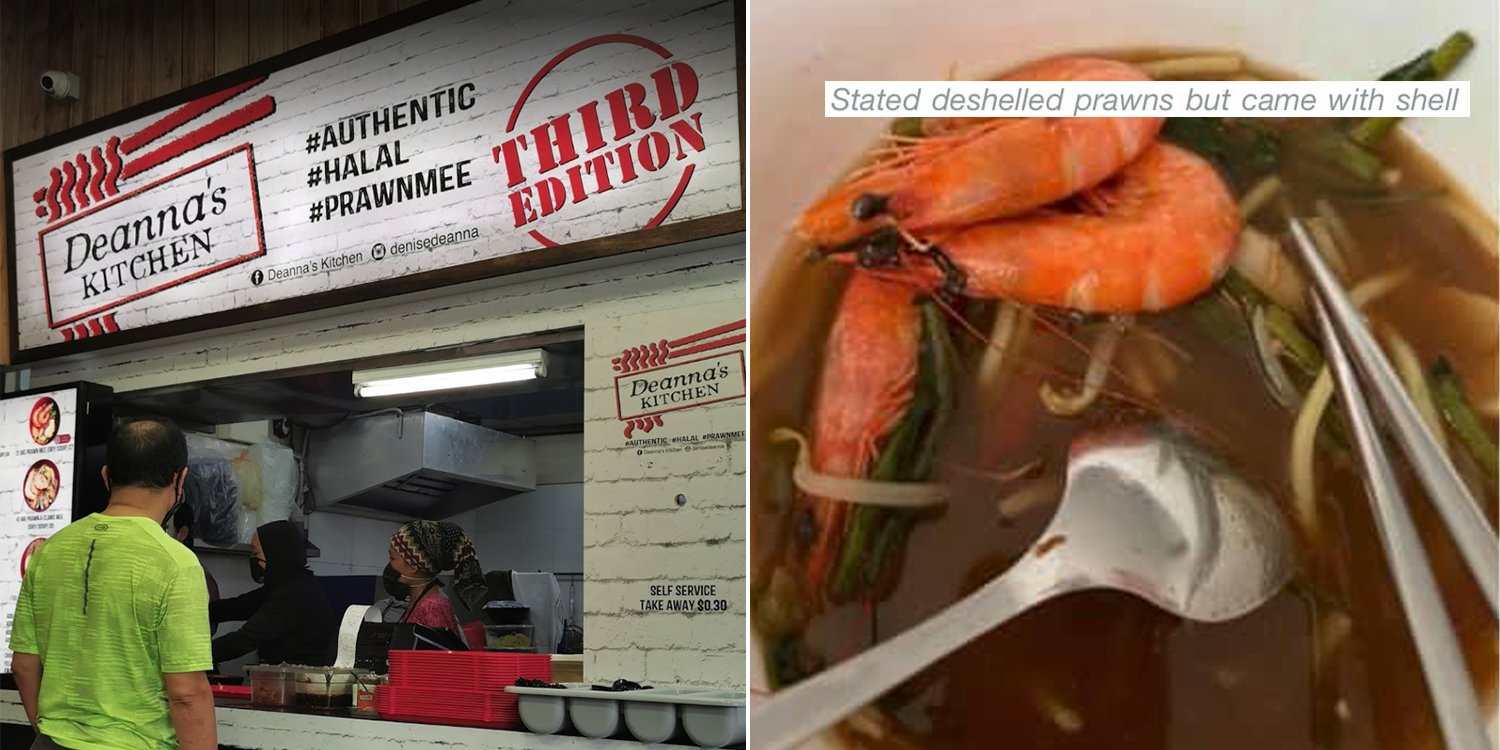 Customer Sends Refund Request Via Deliveroo As Prawns Not Deshelled

UPDATE (5 Jul): Deliveroo has informed Deanna’s Kitchen that the platform will be covering the costs for the refund. We have updated the article accordingly to reflect this.

Enjoying a bowl of soupy noods in chilly weather is probably one of life’s simplest joys. But what if for some reason someone asks for a refund after they’d finished most of the bowl?

For a small business in this climate, this can be devastating. Local halal prawn noodles stall Deanna’s Kitchen received just such a request. 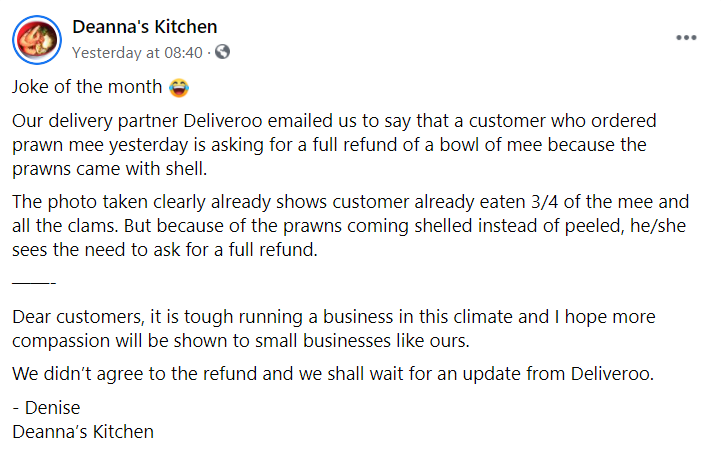 The reason? The prawns were shelled instead of peeled. But the customer had apparently eaten most of the bowl.

As such, the stall rejected the refund request and is currently awaiting an update from Deliveroo, which the customer made the request through.

Deanna’s Kitchen posted on Facebook on Sunday (4 Jul), sharing what they termed the “joke of the month”. And the month’s barely begun.

The stall had received a refund request from Deliveroo regarding a customer who said the prawns in their prawn mee were supposed to be deshelled. 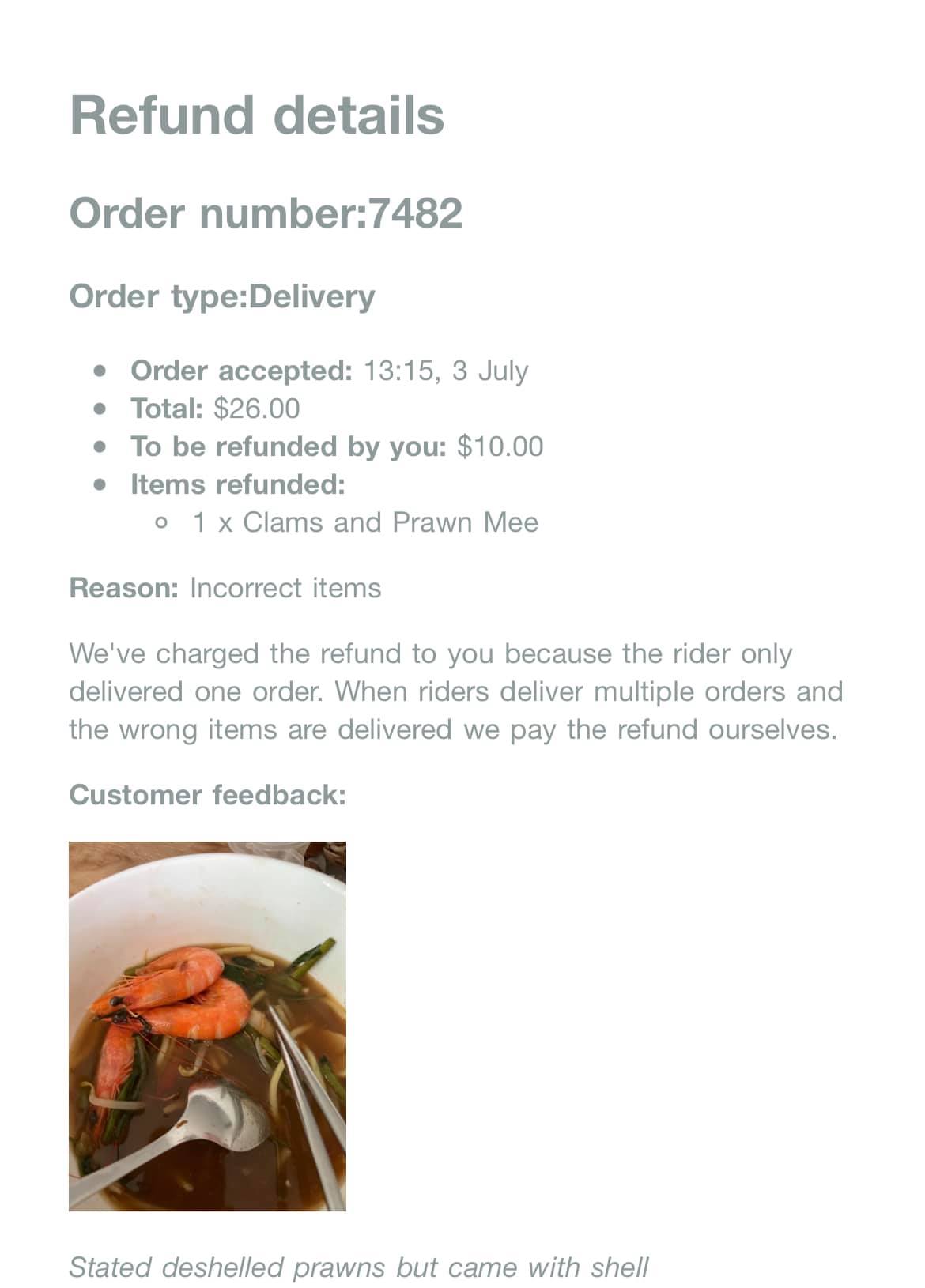 However, the prawns arrived shelled.

Thus, the customer seemingly decided to ask for a full refund — but not before eating most of the noodles and clams.

Deanna’s Kitchen saw the image provided by the customer and rejected the refund request.

Denise from Deanna’s Kitchen explained that they didn’t accept the request because the image shows the customer had already finished about 3/4 of the mee.

The customer had also eaten all the clams, leaving the prawns sitting in the poor bowl along with some mee.

In light of this, they didn’t think it acceptable for the customer to ask for a full refund.

They seek compassion during this period as they said “it is tough running a business in this climate”.

The post ended with Deanna’s Kitchen stating they’ll wait for an update from Deliveroo regarding the situation.

Netizens who saw the post weren’t so amused at the customer’s attempt.

One of them suggested perhaps blacklisting such customers so that they won’t make refund requests on whims.

Others also noted that the delivery partner perhaps should not have placed the burden on the stall to make the refund.

Prawns can be deshelled

Deanna’s Kitchen confirmed with MS News on 5 Jul that Deliveroo has agreed to cover the cost of the refund.

Refund requests are not to be taken lightly or arbitrarily.

It is one thing if the wrong food arrived, but for small businesses that aren’t making as much money due to Covid-19 measures, refunds can be debilitating.

This is especially if the matter is one where prawns arrive shelled instead of peeled.

While the urgency is relative, one would argue that prawns can be deshelled by the customer.

If there was a request for prawns to be deshelled, perhaps this is something to feedback instead of outright asking for a refund.

We hope that an amicable solution can be reached by all parties.